Our koalas need a win!

Pittwater residents joined koala activists and environmental organisations across the state last Sunday in action to save our koalas.

A rally at Mona Vale in the morning topped off a week of protests calling for the NSW government to protect koala habitat by ending development and logging in forests with koalas colonies.

NSW Greens MP Cate Faehrmann said a recent NSW Parliamentary Inquiry into Koalas found that the koala would become extinct in NSW before 2050 without urgent government intervention and had 42 recommendations for urgent action to save the koala.

“The Inquiry found that the biggest threat to the koala’s survival in NSW was the loss and fragmentation of habitat,” said Ms Faehrmann, who chaired the inquiry.

“The time has come for the government to draw a line in the sand and say enough is enough. We know that to save the koala we have to protect their habitat - so that’s what we’re going to do.

“Instead we have developments being fast-tracked that will destroy hundreds of hectares of koala habitat and forests which have been identified as core koala habitat being clear felled by Forestry Corp.”

A maximum of 20 protesters socially distanced and all wearing masks gathered near NSW Planning Minister and Pittwater MP Rob Stokes office at the busy corner of Mona Vale and Pittwater Roads on Sunday - attracting lots of honks and waves from passing vehicles.

Koalas supporters also carried out a banner drop near the Spit Bridge and another rally outside Mr Stokes office on the Wednesday.

The local demonstrations attracted support from a variety of individuals and groups in Pittwater, including environmentalist and former koala handler for the Skippy television show, John Illingsworth, and members of the Avalon Koalas soccer team.

Supporters from across the state also created a “social media storm” on Facebook, Instagram and Twitter, posting photos of koalas or themselves holding signs - with the hashtags #SaveOurKoalas and #StopExtinctions.

Koala survival is a poignant issue for many in Pittwater, where they were once widespread and long-time residents can remember the marsupials living in their gardens.

Projects such as the Brandy Hill Quarry in Port Stephens - that will clear 52 ha of core koala habitat – and Lend Lease’s Figtree Hill development, in Sydney’s south-west - that threatens the last chlamydia free colony in the state – would also destroy key koala habitat.

For those who want to see our NSW koalas survive, please write to or email Mr Stokes at: https://www.nsw.gov.au/nsw-government/ministers/minister-for-planning-and-public-spaces

As a kid in the 1950s I clearly remember koalas at Newport Beach. Sometimes we would see them walking up Robertson Road to reach the thick bush at the blind end of Nullaburra Road.

We saw them through the 1960s especially on the high side of Wallumatta Road, Newport, where our steep block had virgin bush with some exceptionally large trees. I recall a mother with two babies in a tree there.

There were also koalas north of Newport on the plateau too, and at Avalon, Whale and Palm Beaches.

But clearing for residential development after WWII was steadily reducing the area of forested land on the peninsula from about 705 ha in 1946 (which was 47% of the Peninsula north of Bungan Beach - that's almost half) to about 125 ha or just 8% in 1989.

The principal food tree on Barrenjoey Peninsula is GreyGum, Eucalyptus punctata. Other important food trees are Scribbly Gum, E. haemastoma, and Swamp Mahogany, E. robusta. These food trees occur in low densities in the reserves compared with their former densities elsewhere on the Peninsula.

The Peninsula wasn't sewered until the 1980s. Prior to that, septic tank runoff was causing extensive eucalypt dieback. There were large, dead trees on most slopes where houses had been built. The soaked ground was also generating thick undergrowth where there had previously been open woodland so weeds such as lantana were rampant and eucalyptus communities were threatened by expansion of rainforest vegetation and scrub. 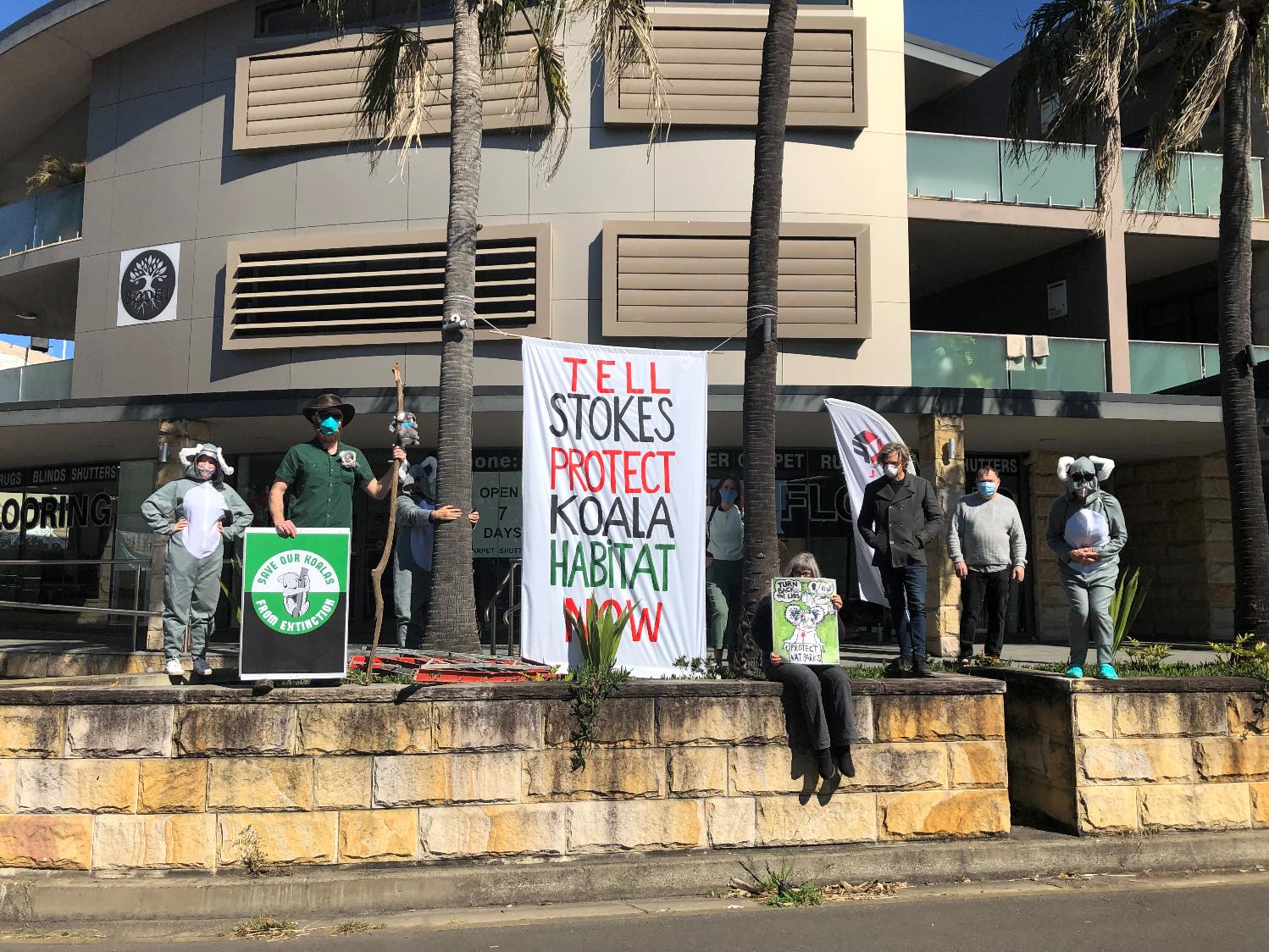