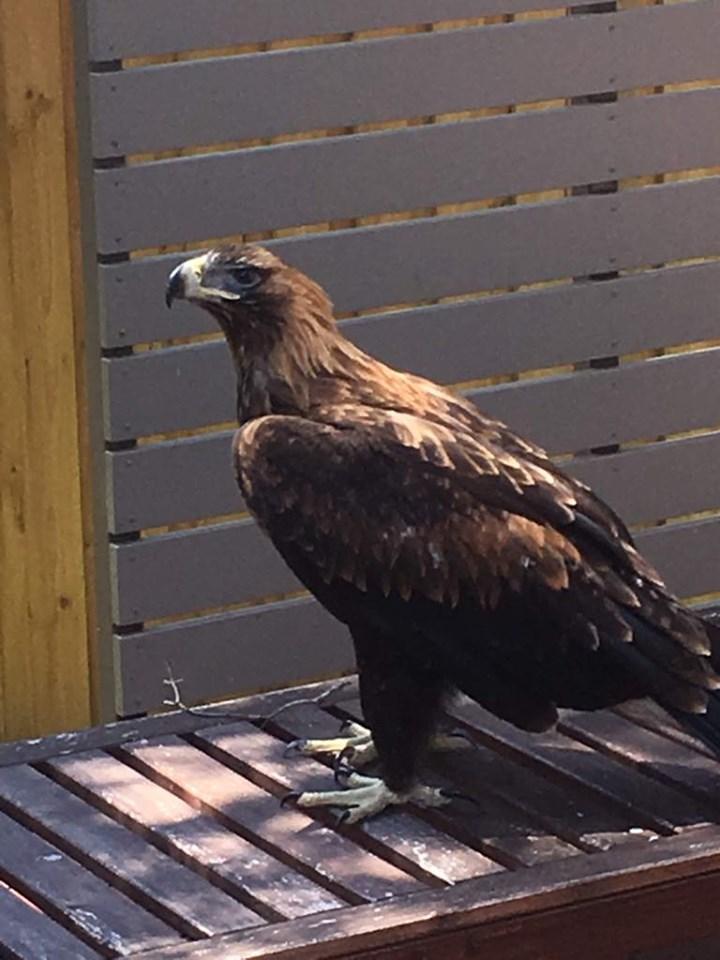 Members of the public are known to exaggerate the size and species of an animal, so I’ve learnt not to get too excited when our office volunteers call me to rescue a ‘6ft brown snake’ (which usually turns out to be a tiny golden crowned snake) or a ‘baby crocodile in a bathroom” (a goanna in the bath-tub) so when I got called to an eagle in a backyard in Mona Vale, I tried not to get my hopes up...!

One of our other crack rescuers, Susan, happened to be at my place for the day (helping me play with pythons) so I had a built-in partner-in-crime from the start of the rescue. We gathered up blankets, nets, a raptor-friendly container and some body armour and headed off in trepidation.

As soon as the member of the public, Ian, showed us through the back-door and out to his small enclosed yard, our hearts leapt with joy - and terror - as there stood an enormous wedge-tailed eagle! The eyes of the eagle looked straight through to our very souls.

Susan, being a quick-thinking Texan, took the big zebra-print blanket and threw me the brown blanket and silently gestured that we surround and usher the large raptor into the corner of the property where there was a gabled roof. This would prevent the eagle from flying up and out of our grasp. Incredibly, our first attempt was successful and we were able to secure those rather large talons and place our glorious new patient into a large plastic container for transportation. Pretty soon we were winging our way to the Taronga Wildlife Hospital where ‘Oracle’ was quickly admitted for veterinary assessment and intensive care.

For 3 weeks, Oracle remained in the expert care of the veterinary team at Taronga Wildlife Hospital where she was treated for puncture wounds to the chest and mouth. It was a bit of a mystery as to how she sustained these wounds until Margaret was able to get some possible answers from her local birding group. One of the members had witnessed a mid-air fight between the local sea eagles and a wedge-tailed eagle. It was assumed that she was still a young dispersing bird trying to establish herself in a hostile environment. The attack had grounded her and she’d found herself needing to accept food from anyone - including humans. As this behaviour is unacceptable for a bird of prey, the decision was made for Oracle’s rehabilitation to continue with the legendary Peggy McDonald of Higher Ground Raptors in the Southern Highlands. Peggy told us that Oracle would need to “bird up” for quite some time before being returned to the wild. Her ongoing veterinary care was taken over by the amazing Dr Charles Carter who performed regular health checks which included blood tests.

The ‘birding up’ process took almost 7 months. Oracle had to learn that humans are not a source of food and that she needed to hunt silently and stick with her own kind. Peggy made sure to pair her and another youngster (Kuparu) with some adult eagles so that they could learn the ropes.

Last Thursday (June 27th, 2019) Oracle and Kuparu were released into the wild! They wheeled and circled joyfully before turning and leaving. What a glorious sight!

We are so thankful for the input of so many knowledgeable and committed experts, without whom Oracle would never have made it.