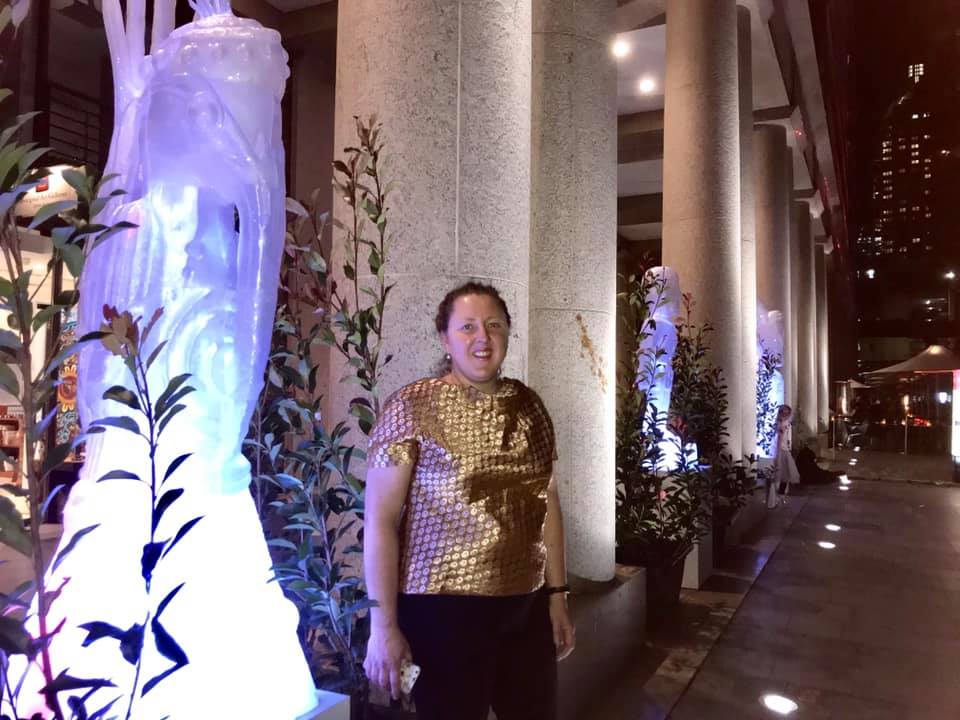 Ocean Sentinels is the fourth in a series of works by the Small Ocean Collaboration highlighting the social, cultural and environmental impact of human-induced climate change and ocean plastics on communities across the Pacific.

The original concept was born as a response to plastic pollution by UNSW Art and Design Alumni Jeremy Sheehan during a mobility course I ran in Vanuatu in 2014. New Colombo Plan mobility funding made it possible to run other mobility courses in Palau, Kiribati which allowed the development of connections to artists around the Pacific to form the Small Ocean Collaboration and UNSW students and Alumni to join the collective.

We focus on large scale public art events such as Sculpture by the Sea and VIVID to create works to challenge viewers to think about big social, environmental and cultural issues through humanising them. We use a visually engaging format to attract the audience, inspire interest, provide information, educate and inform the need for change

Ocean Sentinels for VIVID Lights 2019 comprises a series of traditional figures from Pacific Islands and Nation, including Australia, Papua New Guinea, Palau, Vanuatu, Solomon Islands, Nukouro Atoll, and The Philippines. Each represent the communities, environments and species under threat from sea level rise due to human-induced climate change and the impacts of ocean plastic pollution. We were able to leverage data produced by UNSW Prof. John Church and his team for UN reports on predicted ocean levels to identify locations to highlight.

Each totem was created by a local artist of the area it represents. Their small wooden carvings have been scanned, scaled, sectioned and then 3D printed from recycled PET bottles and recyclable plastic filament pushing 3D printing technology to its full limits. At 2.4m to 3m tall, they stand at East Circular Circular Quay looking out over Sydney Harbour, watching the tides rise and fall, waiting for their inevitable inundation. Visitors passing the figures can listen to the haunting soundscape of lapping waves as the tides come in and out, composed and programmed onto a customised raspberry pi unit by Adam Pierce.

The figures are lit with moving light reflections, echoing waves along island beaches. As the waves rise, they will eventually consume these communities, inundating their food sources, flooding their homes and necessitating relocation. When communities flee their island homes, they risk losing their identity, culture, language, traditions, and connectedness. One day, The Ocean Sentinels may be all that is left to remind us of these cultures lost to human-induced climate change.

We could only achieve this ambitious project through partnering with LULZBOT to create a 3D printer farm for the project, Aurarum for making much of our filament under tight deadlines, VIVID and Coca Cola for financial support and the hard work of all our collaborators and artists.

I encourage you to pop along to VIVID Lights to have a look at our work and start some conversations around what we as individuals and communities can do to reduce plastic pollution and our personal climate impacts. 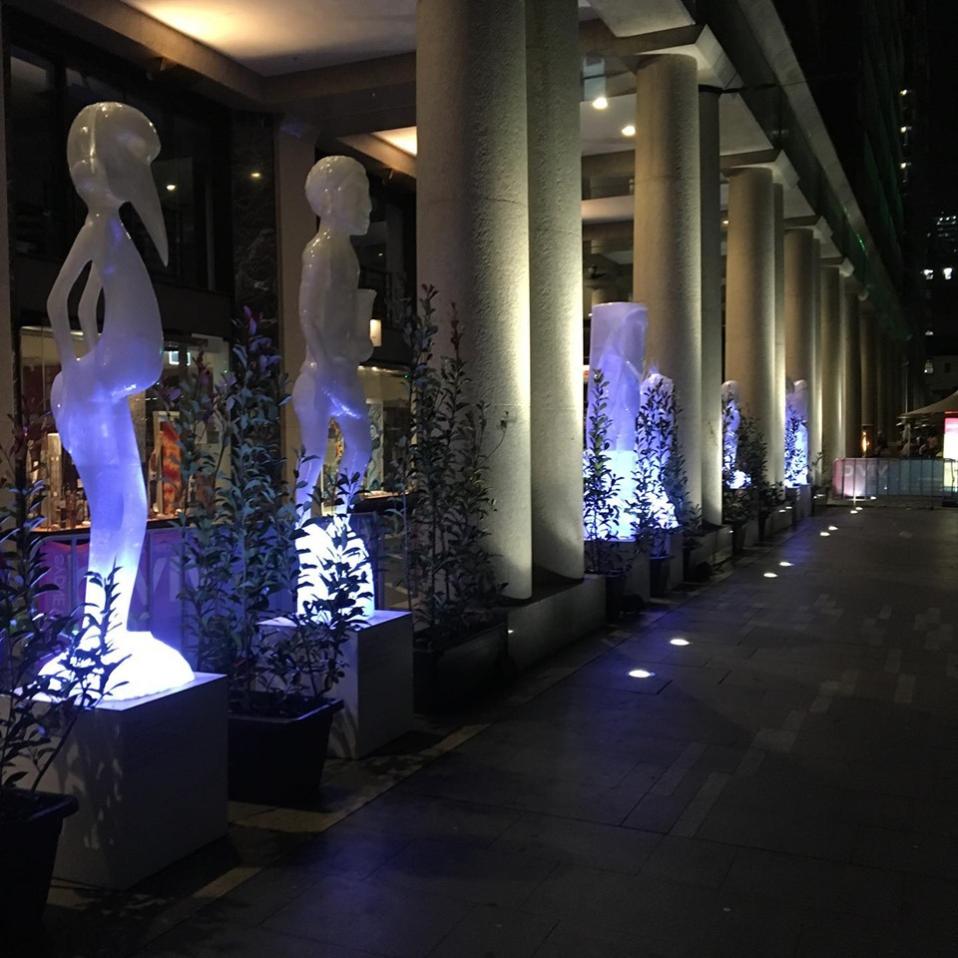 The germ of this formed in one of the Island Innovation Labs I ran in Vanuatu in collaboration with DJ Spooky (Paul D Miller). Whilst in Vanuatu we were exploring the challenges Pacific Island communities face from human induced climate change and the role creatives and artists can play as advocates and educators in this scenario. At the time UNSW Art and Design Masters of Design student Jeremy Sheehan was particularly interested in ocean plastics and how to communicate ways to prevent plastic pollution. He formed a creative collaboration, The Small Ocean Collective, with artists from all over the Pacific to explore this. It has been iterated every year, included over 40 artists, and explored a number of variations.

Its first public delivery was as part of Sculpture by the Sea, Sydney in 2015. 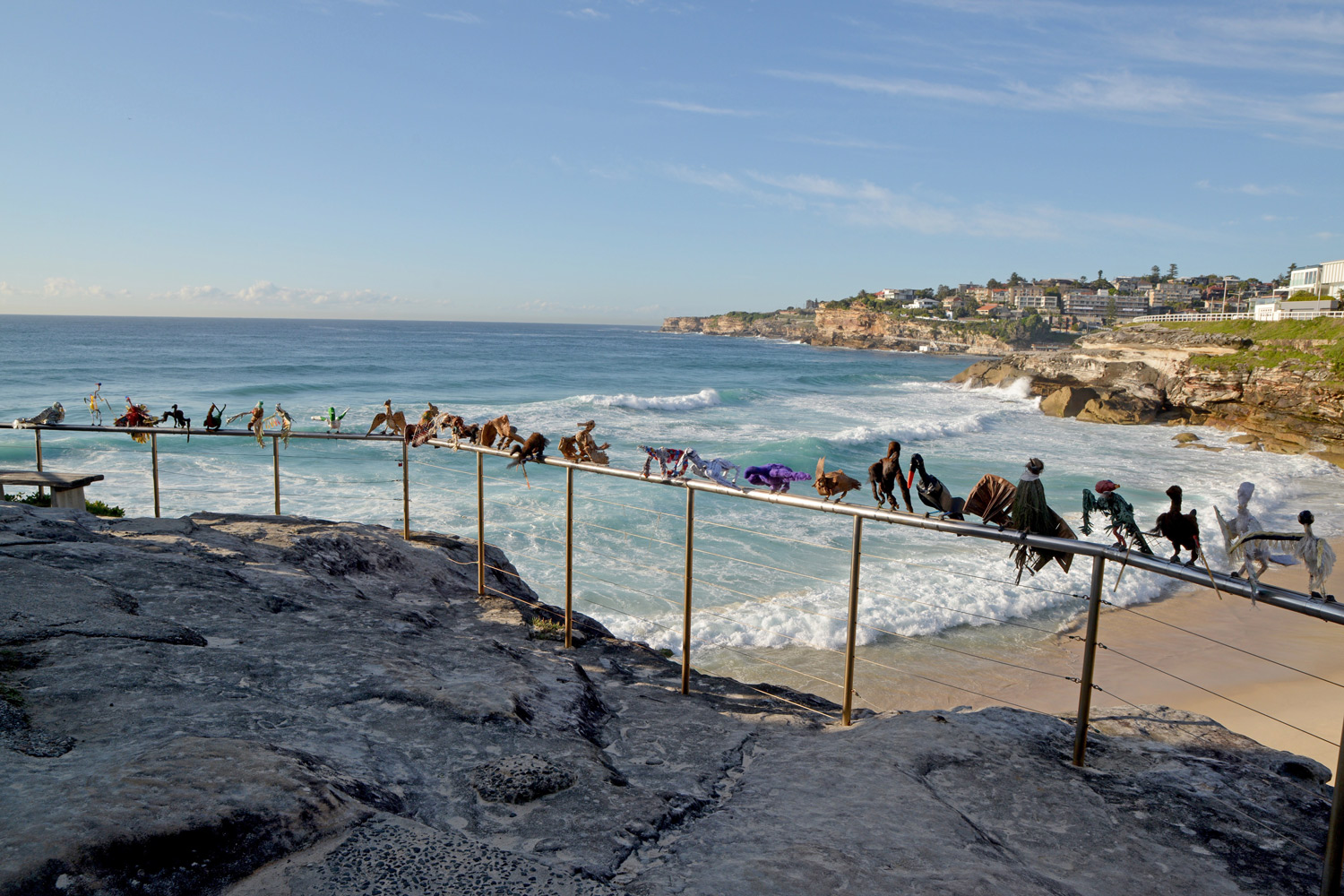 The work called Transmigration (above) explored the impact of ingested plastics on sea birds. Jeremy invited artists from across the pacific to collect plastic from their local beaches and fill wire frames he had made with them. He then asked them to weave or create a covering for the frame that would biodegrade over the duration of the exhibition revealing the ingested plastics and educating the audience as to the impacts on species across the pacific. (image by Clyde Lee)

In 2017, after visiting Palau with Jeremy and some New Colombo Plan Scholars, and Kiribati with more New Colombo Plan Scholars, we started discussing the impacts of ocean level rise on communities across the pacific. The impact on agriculture, mariculture, water, health, culture, community, economics and wellbeing. This informed a second work for Sculpture by the Sea, Rise and Fall (image by Jessica Wylde). Jeremy sought permission from artists from a number Island Nations to 3D scan sculptures they had made of traditional figures. Each representing countries, cultures and communities at risk of sea level rise. We then translated each into a large wire mesh and sand sculpture designed to wear away and disappear in the weather over the duration of the exhibition in its exposed location at Tamarama. As these degraded, perfect plastic replicas were printed on a 3D printer next to the site and at Manly Art Gallery, referencing that eventually, as the communities become climate refugees, their cultural icons will no longer be found in situ, but rather in museums. Our 3 great challenges were to power our site, master 3D scanning printing and keep the printers running. All meant new collaborators to play with.

In 2018, our 3rd Sculpture by the sea collaboration with the Small Ocean collective was called Inundation (Image by Charlotte Curd). In this work we made the same figures as 2017, but 3d printed in translucent recycled PETG, hollow. We fitted solar power water pumps to each figure and filled and emptied each echoing the rise and fall of tides in their respective locations. We also illuminated the from inside. The first SXS work to be illuminated at night. It created hauntingly beautiful, ghostly figures of cultures that may soon disappear due to human induced climate change.

This year our collaboration will feature at Vivid Lights 2019 as Ocean Sentinels.

We have now recreated the figures to be 3D printed at 2 - 3 m tall. Adam has composed a sound track of rising tides for us, we have designed a light show of water ripples and have mastered 3D slicing, scaling, scaffolding, and printing as well as printer maintenance, new software and construction techniques.

We have also become better at asking potential partners and collaborators for help to realise our projects and look forward to collaborating with the Vivid Lights 2019 team on delivering a great experience.

This year’s Light Walk curates over 50 radiant works into the largest outdoor gallery of its kind in the Southern Hemisphere. The route stretches for more than three kilometres, from The Rocks through the city’s oldest streets and laneways around Circular Quay to the Sydney Opera House and into the Royal Botanic Garden Sydney, with major light projections on the Sydney Harbour Bridge, the Museum of Contemporary Art Australia (MCA) and Customs House along the way.

Thanks to everyone we have collaborated with so far!:

Selena Griffith is Senior Lecturer: Design Thinking, Innovation and Entrepreneurship at The Centre for Social Impact.

While at UNSW, Selena has developed and taught courses across four faculties on the subjects of (i) Innovation, Entrepreneurship and Collaboration, (ii) Sustainable Design, (iii) Design Futures, (iv) Design Practice and (v) Design Management.

In 2011 Selena was awarded a Global Future Leaders Award from the World Human Resources Development Congress. Selena is also a co-founder of The Island Innovation Lab, a program designed to develop cross-disciplinary collaboration skills using design thinking methods to assist diverse teams in working towards addressing global sustainability issues. The program has received multiple rounds of financial support from the Australian Government, including the Short Term Mobility Plan and the New Colombo Plan. In 2014 The Island Innovation Lab was recognised by the highly acclaimed Buckminster Fuller Institute and was selected for inclusion in their Catalyst Program. Her passion for cross-disciplinary learning and innovation is further evidenced by her being awarded the internationally recognised Most Outstanding Faculty Advisor ENACTUS 2016.

Jeremy Sheehan is an extraordinary socioenviro-artist, teacher and mentor, based in Coffs Harbour. Twice finalist in the Sculptures by the Sea, where his art works were focused on marine debris, cultural loss and climate change. Visit: www.jeremysheehan.net

Adam Pierce is a musician with a long history in the electronic arts and computing industry and was one of Australia’s first video game software designers while still only in Davidson High School.

Ocean Sentinels comprises a series of traditional figures from Pacific Island nations such as Australia, New Guinea, Palau, Fiji, Vanuatu, Kiribati, Marshall Islands, New Zealand, Samoa, and The Philippines. They represent the communities under threat from sea level rise due to human-induced climate change and those suffering the impacts of ocean plastic pollution.

Each totem has been scanned and then 3D printed from 100% recycled plastic filament. At 2.4m to 3m tall, they stand at Circular Quay looking out over Sydney Harbour, watching the tides rise and fall, waiting for their inevitable inundation. Visitors passing between and around the figures can listen to the haunting soundscape of lapping waves as the tides come in and out.

Each of the figures is lit with moving light reflections, echoing waves along island beaches. As the waves rise, they will eventually consume these communities, rendering them climate refugees. When communities flee their island homes, they risk losing their identity, culture, language, traditions and connectedness. One day, The Ocean Sentinels may be all that is left to remind us of these cultures lost to human-induced climate change.

Boathouse Totem
Small Ocean Collaboration with Belau National Museum
Location: Koror
Country: Palau
Geolocation: 7.514980, 134.582520
Story: This figure stands at the boathouse, near the edge of the water, protecting the community.

Vanuatu TamTam
The Ocean Sentinels Small Ocean Collaboration with Artist Willie Koko
Location: Efate/ Ambrym Island
Country: Vanuatu
Geolocation: -15.388977, 166.885687
Story: The Ambrym drums simulate the voices of ancestors. The drum comes to life as an actual character through the sound that it gives out. 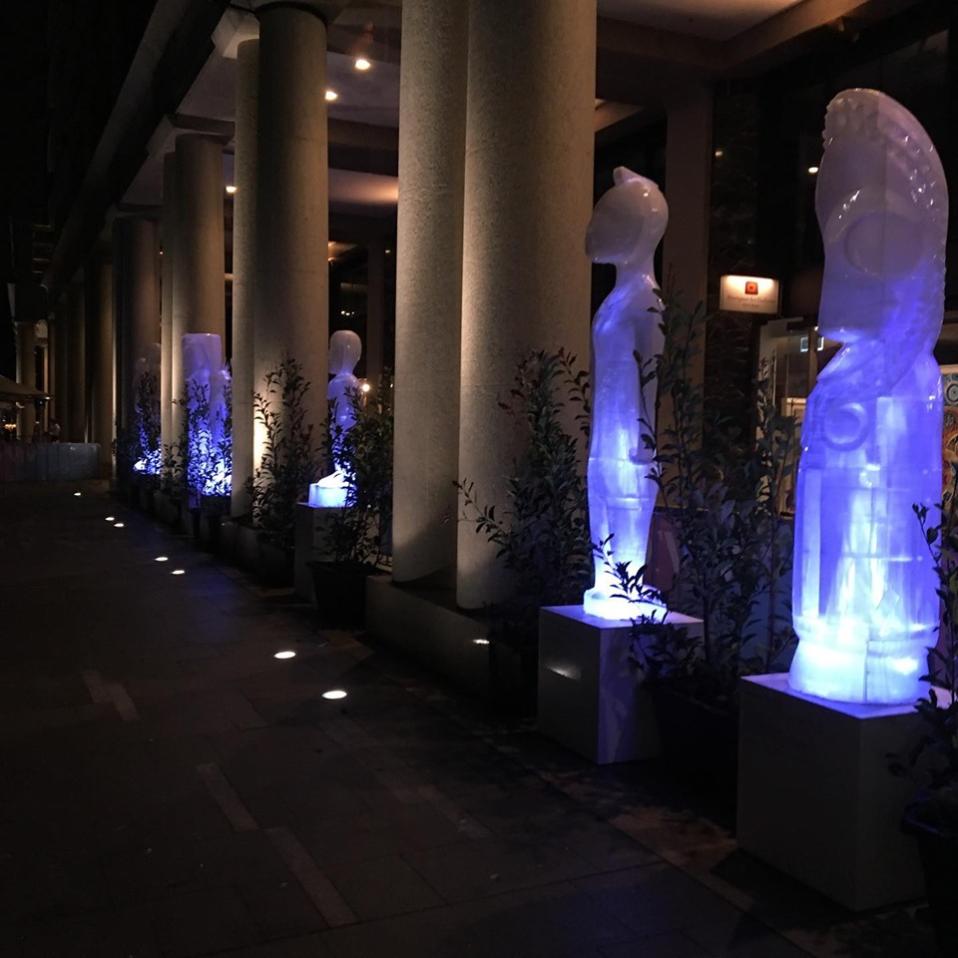 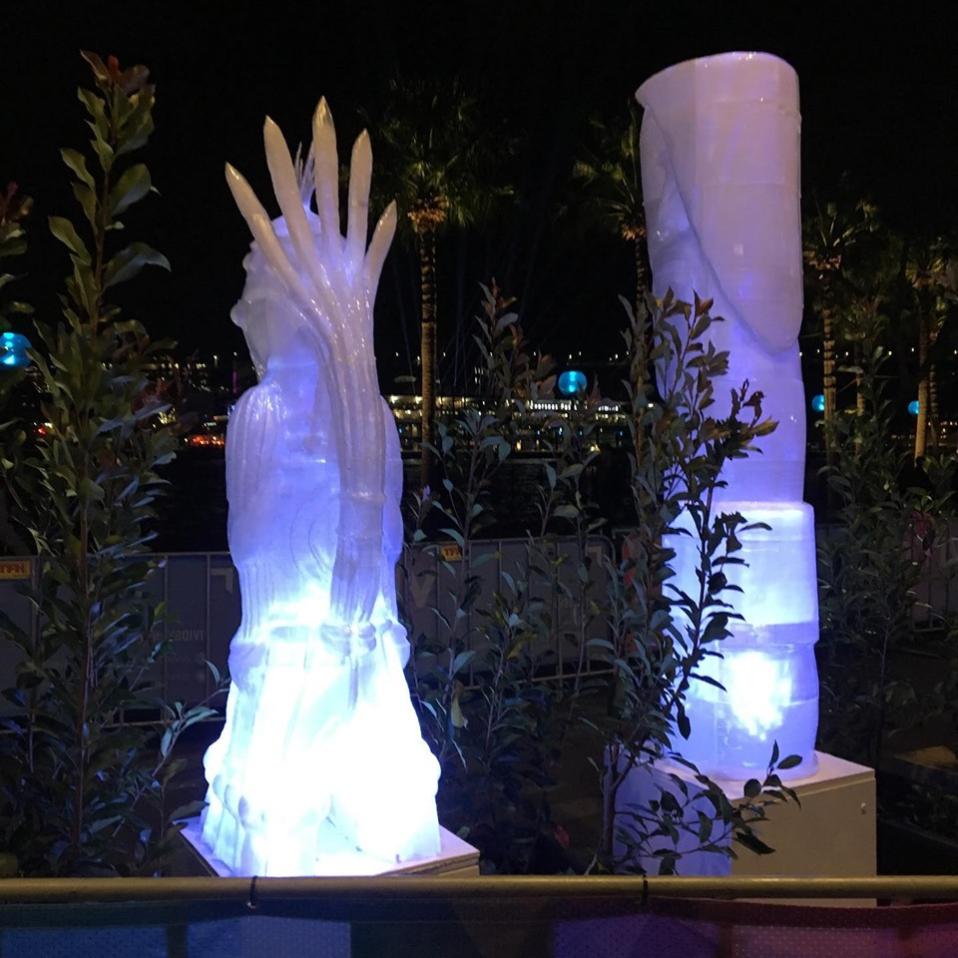