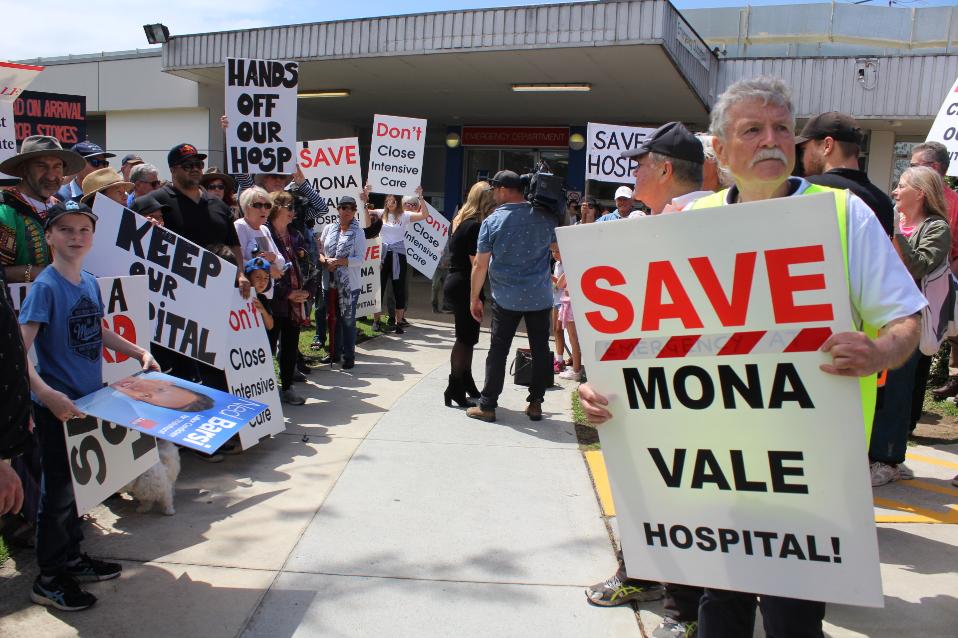 There have been a 'rash' of articles appearing in the Sydney Morning Herald, The Age and in ABC News yesterday, November 17th and today, Sunday the 18th - so Pittwater Online News is refraining from running new NBH 'news' this Issue in order to give those toiling at the coal face that needed time to resolve 'teething' matters.
Suffice to say the general sentiment in the community is that a staggered 'soft' opening would have been a better option, keeping the Emergency Department at Mona Vale Hospital AND Manly at full steam to meet the demand, clearly not anticipated at the new venue, in the meantime. A perusal of the June 29 2015 Draft of the Contract, available online, may clarify why these doors were  slammed shut prior to the new ones being open to being able to operate at capacity, for those interested.
For those who would prefer to see ED being available within a reasonable time frame and closer than 'way over yonder', the dialogue to return these services is taking the form of a visit to Macquarie street this week - details below.
For those who haven't seen the reports published yesterday, which offer a bit of 'catch-up' on what's already been discussed locally since October 31st, please visit:

November 18, 2018: Save Mona Vale Hospital Local Action Group, Media Release
Residents are calling on the NSW government to take immediate action to provide safe hospital services for the Northern Beaches following the disastrous opening of the Northern Beaches
Hospital.
Save Mona Vale Hospital chairman Parry Thomas said the under-resourced hospital - which opened at the end of October - has been beset by problems with many patients facing enormous waiting times and being refused treatment.
Save Mona Vale Hospital has warned for many years that the new hospital would be too far away from residents between Collaroy and Palm Beach in a life-threatening emergency, Mr Thomas said.
The government’s own agreement with the private operator of NBH also indicated that one of its main functions was to take pressure off Royal North Shore so that its catchment would be much broader than the coastal strip served by Manly and Mona Vale Hospitals, he said.
However, with the revelation today that doctors are threatening to withdraw treatment from the facility, residents demand the government step in and take action now.
“How can the public have any confidence in this hospital when doctors are threatening to withhold treatment?” he said.
“How do we know that deaths and unnecessary damage have not already occurred due to this debacle?
“Enough’s enough. The NSW government must step in and take responsibility for public health and safety.
“Mona Vale Hospital emergency, maternity and acute services must be reopened immediately and Northern Beaches Hospital turned into a public hospital.”

Save Mona Vale Hospital supporters will hold a “wake” outside NSW Parliament on November 21 for acute services lost from their hospital.
Save Mona Vale Hospital chairman Parry Thomas said “mourners” would travel on a “Hospital Bus” to Macquarie Street, dressed in black, to send a strong message to the government.
“The Pittwater community has lost an essential service with the closure of acute services at Mona Vale Hospital and the people are grieving,” Mr Thomas said.
“This will give us a chance to mourn our loss whilst sending a clear message to the Premier Gladys Berejiklian, Health Minister Brad Hazzard and Pittwater MP Rob Stokes, and that we want emergency, surgery, intensive care, paediatrics, maternity and other acute services returned to our hospital.”
Of 35,033 presentations to Mona Vale Hospital in the latest year for which statistics are available, the year 2016-17:
Mr Thomas said the enormous numbers of people presenting at the new Northern Beaches Hospital confirmed his group’s concern that it would attract patients from a far wider area and in numbers far greater than the state government planned for - rather than simply cater to the Northern Beaches.
NSW Health Department statistics showed that on Tuesday night (November 6) at 10.30pm Northern Beaches Hospital had 26 patients triaged and waiting for treatment, while Royal North Shore had 2, he said. (Statistics recorded from www.emergencywait.health.nsw.gov.au )
“The many stories of chaos, patients giving up, going to another hospital or simply going home and of the hospital being unable to provide services, show that we need an easily accessible public hospital that is actually on the northern beaches – as well as the one located an extra 12km away up a flood-prone road,” Mr Thomas said.
Anyone wishing to travel on the “Hospital Bus” should contact savemonavalehospital@gmail.com or call 0403 821 520. Otherwise “mourners” can meet us at Parliament House at 12.30pm on Wednesday, November 21.
From Save Mona Vale Hospital Local Action Group 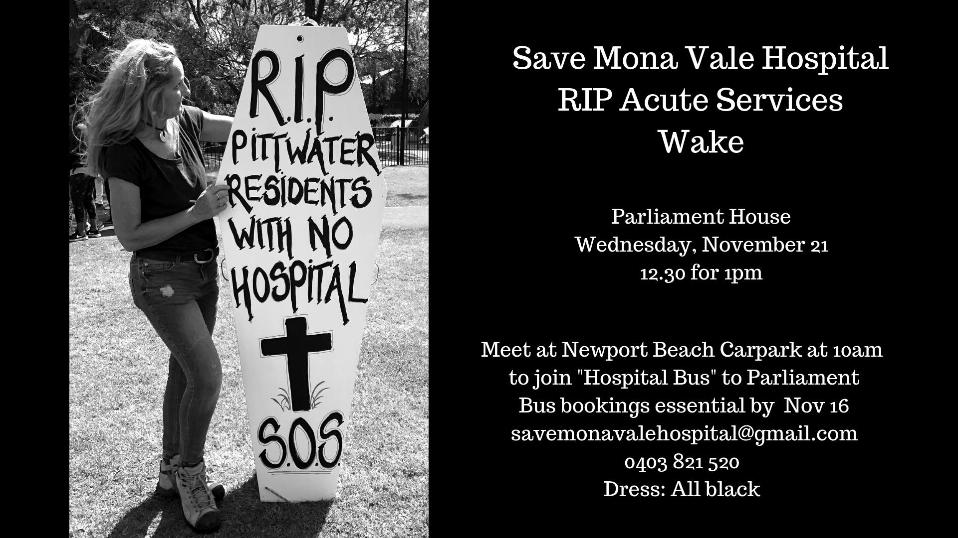