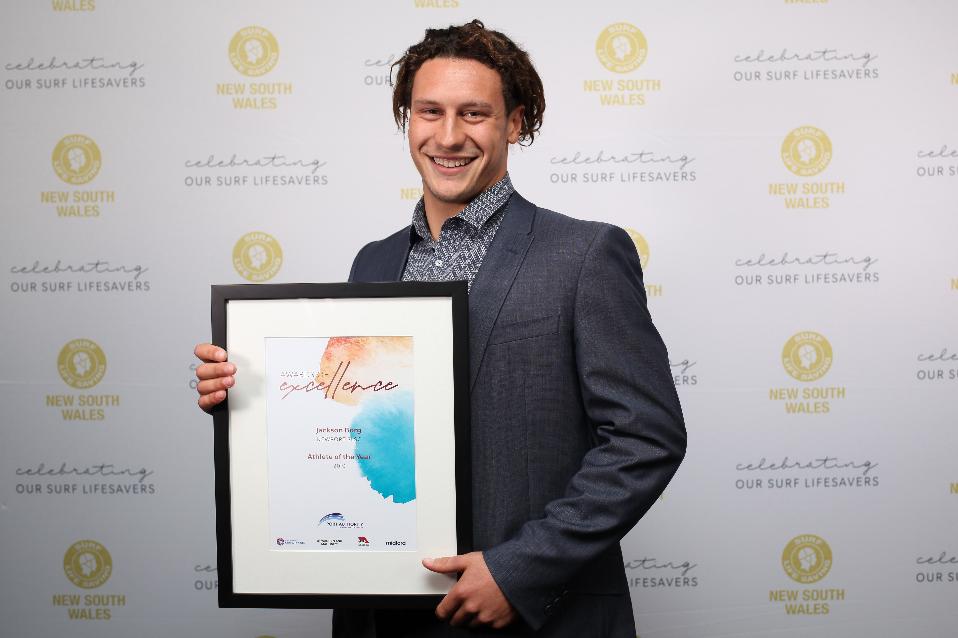 The annual Awards of Excellence honour outstanding achievements in all aspects of surf life saving, including surf sports. A record number of lifesavers from across NSW attended the event held Sydney on 31 August.

Television personality and Surf Life Saving member, Tom Williams, hosted the evening. He shared the stage with the state’s top surf lifesavers as they were honoured in front of their peers.

The Athlete of the Year is a highly competitive award with all the finalists this season achieving considerable success on the state, national and international stage.

Newport’s Jackson Borg took out the award due to the consistency of his performance at every level of competition. He won from a group of eight finalists from across NSW.

“I’m super stoked. I didn’t expect to win the award. I’m glad all the hard work paid off.

“Everyone who was nominated are extremely amazing athletes, so I was just pleased to be in the running with them,” said Jackson Borg.

Not only is Jackson the 2019 NSW Open Ironman champion, his outstanding results across all levels of competition include gold in the NSW Interstate Board Race, the Interbranch Open Ironman and the Sydney Northern Beaches Taplin and Board Rescue events.

He brought home silver in the Open Ironman at the International Life Saving World Championships and the Ocean 6 Series Run Swim Run.

“In ten years’ time I still want to be competing in Ironman competition. I want to be solidified in the Nutri-Grain series - hopefully in the top five,” said Jackson.

Jackson was a member of the successful Australian Life Saving Open Team competing for the Sanyo Bussan International Lifesaving Cup in Japan. This was the third time he represented Australia and returned with a swag of medals.

As well as spending countless hours training, he is an active and popular member of the Newport Surf Life Saving Club, promoting positivity and perseverance in everyone.

“I also want to help all the younger guys at the surf club. Help them to hopefully be where I’m at. It’s extremely important for me to be able to give back to the surf club.

“It’s a goal of mine to be a good role model for the younger kids,” said Jackson.

Jackson has spent a lot of time passing on his skills and surf knowledge as an instructor and team leader with the Surf Life Saving Sydney Northern Beaches education team.

“It’s great to be fit and to be able to compete at a high level but it’s awesome to be able to help someone in trouble and potentially safe a life. It’s the foundation of what we do,” Jackson concluded.

Mike has great passion for education and training. An active trainer, assessor and facilitator, he is one amazing Chief Instructor, keeping his club’s 25 patrols proficient and thriving.

As one of the most active educators in the state, Mike has been part of updating and renewing courses, promoting and integrating e-learning as well as coordinating advanced training opportunities branch-wide.

Mike has lead the way in education at South Curl Curl and the Sydney Northern Beaches branch for the last four seasons. He facilitated 14 out of 21 club courses last season. 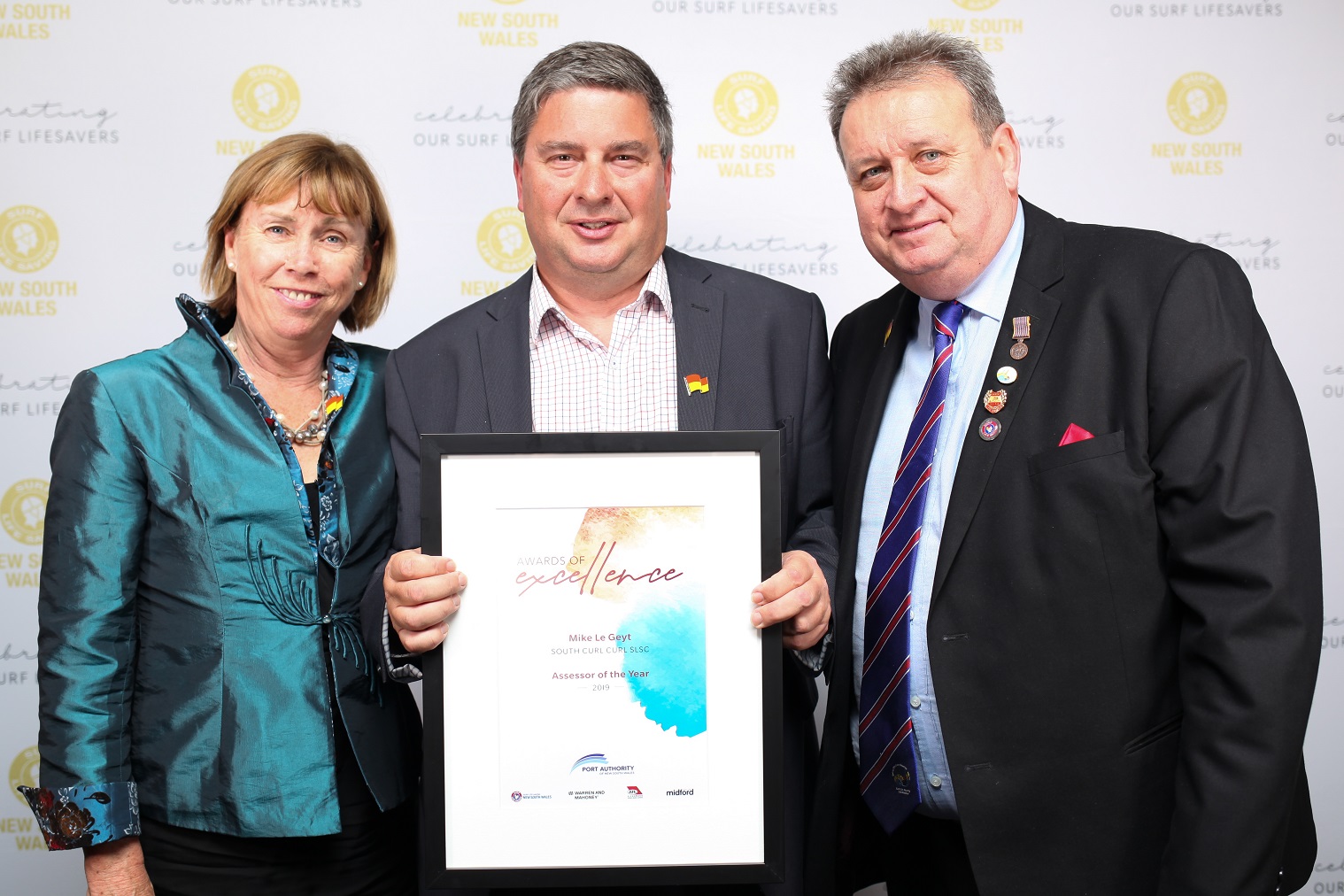 Louis Tassone, North Curl Curl SLSC and Naomi Scott, Manly LSC both were recognised at this year's Surf Life Saving NSW Awards of Excellence, Louis being named Official of the Year and Naomi winning Youth Athlete of the Year.

One of the friendliest and most level-headed Officials on the beach, Louie is dedicated to the development of surf sports locally and nation-wide. A senior Official at branch, state and national events, Louie is recognised by his fellow officials, competitors, managers and spectators for his respect, fairness and positivity.

Last season Louis delivered key initiatives including practical training sessions for new officials and deployed the Sports Team App to improve communication and efficiency for all involved in Branch events.

Louis has worked with neighbouring Sydney and Central Coast branches to coordinate event calendars to provide greater opportunities for competitors and promote overall participation. Louis has recently been elected as Sydney Northern Beaches Director of Surf Sports. In his role he will deliver and drive some of the biggest events in the state, represent Surf Sports officials and continue his work all areas of surf sports. 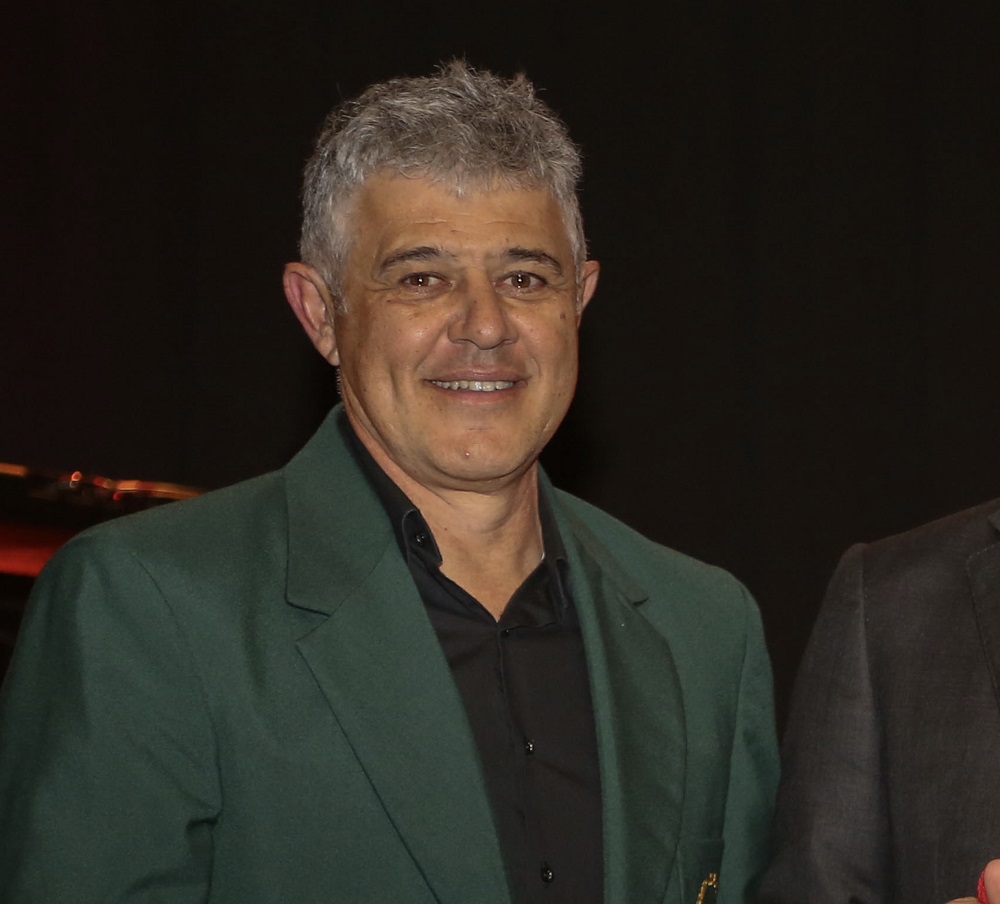 Whether it’s in the waves or pool, 2019 Youth Athlete of the Year from Manly Life Saving Club, Naomi Scott always gives 100 percent.

Naomi is one of the state’s most talented and promising athletes. She continues to improve her record every season.

Suffice to say she’s won more gold medals than most people twice her age. She has competed at the highest level of competition and represented the branch, state and Australia across two age groups.

Naomi was the co-captain of the Australian Youth Life Saving Team for the 2018 ILS World Championships in Adelaide and again she led the successful Australian Open Team competing for the Sanyo Bussan International Lifesaving Cup in Japan.

Naomi is a positive role model for her club and has shown an extraordinary ability to find balance across her training that includes 12 sessions per week, second-year university studies, patrols, coaching juniors and elite competition. 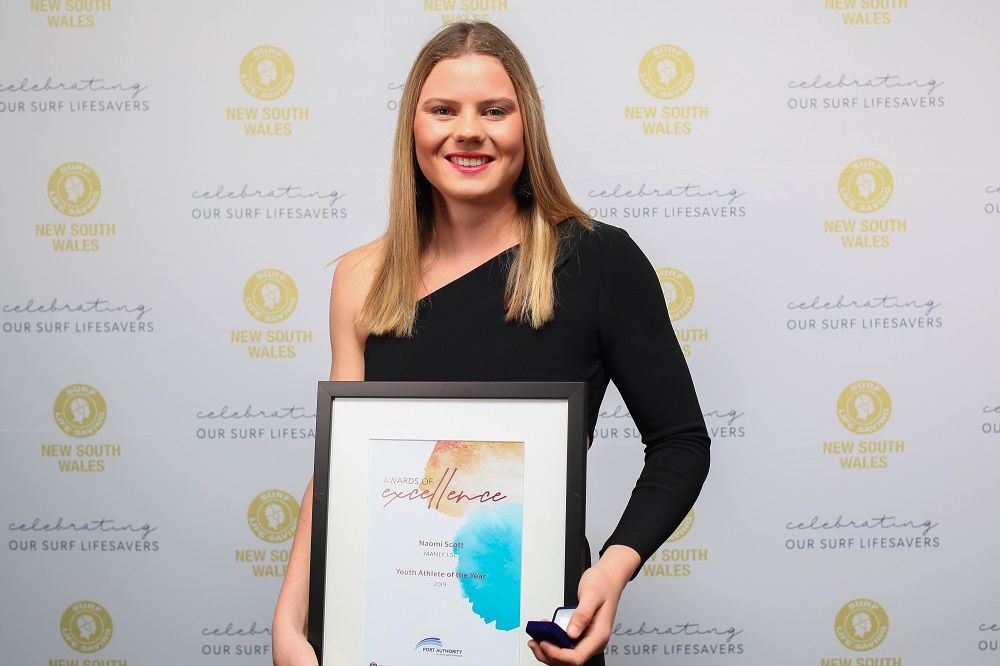 Surf Sports Team of the Year - Under 17 Male Board Relay, Swansea Belmont SLSC

The 2019 SLSNSW Awards of Excellence are proudly supported by Port Authority of New South Wales. Almost 500 of Surf Life Saving’s most outstanding lifesavers, athletes, educators, coaches, and administrators from around the state celebrated the awards.