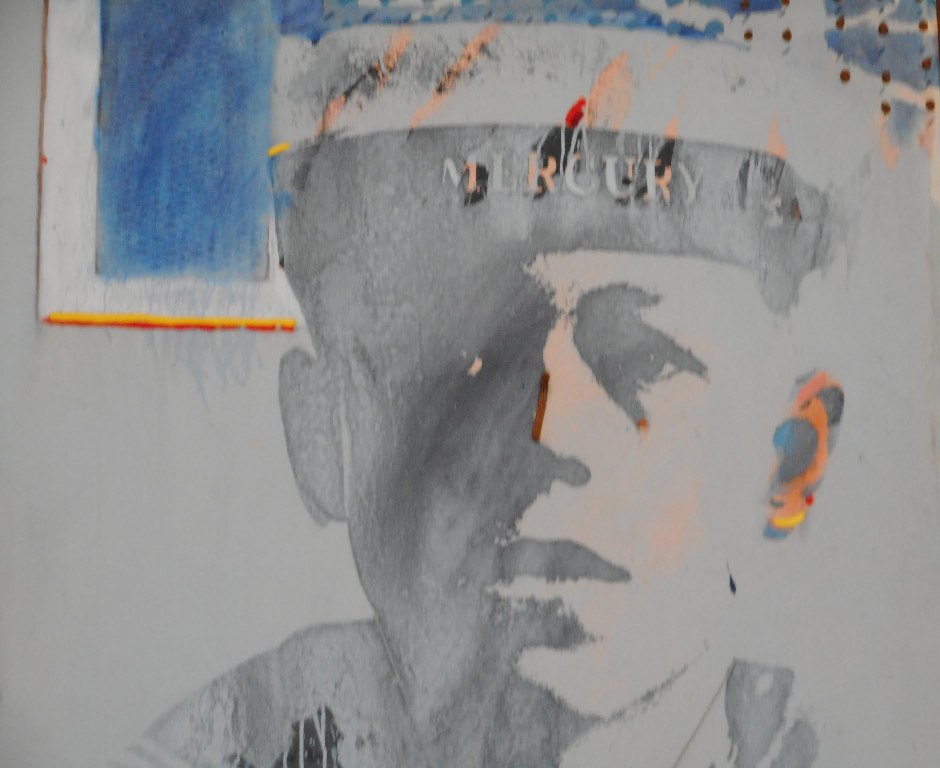 I attend some University of the Third Age lectures at the North Curl Curl Community Centre/Bowling Club.  On my first visit I noticed on the wall a large, [two metre square,] work of art.  There appeared to be two identical portraits in the work showing a young fellow wearing an Able Seaman’s uniform.  It was a couple of weeks before I could get a closer look at the work which is mixed media. For example, the lanyards are real and are not painted onto the canvas.  The caps bore the name Mercury.  I knew that there were two establishments in the UK of that name.  One was HMS Mercury, a Royal Naval communications establishment and the other was the Training Ship Mercury, [TS,] which was on the river Hamble in Hampshire in the south of England up until 1968. The label on the picture states “Warringah Art Prize 1978, Contemporary Section, ‘I’ll put on the sailor’s suit and cap,’ Lindsay Pow “
Original photo which is featured in the work of art
I spent two years in the UK at the Royal Naval Reserve establishment HMS Conway from 1954 as a Cadet RNR training to go away to sea. John, also a cadet in my term had been on the Training Ship Mercury as a Leading Seaman, which he describes as a sort of prefect or cadet captain, and he had received a scholarship to HMS Conway.  I took a photograph of the art work and sent it to John who now lives in central Canada asking if it was in fact a portrait of a boy from the Training Ship Mercury and asking whether they had TS on their caps.  John confirmed that it was a boy from the TS Mercury and said that he had forwarded my e-mail on to the club Secretary in the UK.  The response was immediate and I quote it in full; -
John to Snowy, “Snowy, this looks like a Mercury Boy with the hungry anxious look?”
“John, the picture is indeed a Mercury Boy, in fact a famous one, certainly in Australia.  This is Claude Choules, who was at TSM 1915-1916.  He went on to serve in the RN and later in the RAN and eventually became the last serving combatant of WW1 as well as being the last man to serve in both World Wars.
He died in Fremantle, Western Australia in May 2011 aged 110 and was given a State Funeral.  The picture in the painting is from a photograph of Claude in his Mercury uniform which was displayed at his funeral.  Later the RAN named a supply ship after him.  The only Mercury boy to have this distinction.  Snowy” .
I have subsequently noticed in my reading that one of Choules’ daughters has the surname Pow which is the surname of the artist. Choules' nickname was ‘Chuckles’ and he used the Christian name Charles in preference to Claude.
According to articles that I have read it appears that even by the English standard of boarding establishments the TS Mercury was a pretty tough place.  The dormitory, HMS President, [formerly HMS Gannet,] located on the River Hamble, was a hulk with a corrugated iron roof.  Descriptions of her include, “a Gulag in winter,” when ice accumulated on the hammocks.  “Bare feet, short haircuts, limited food, no heat.”  Documented, two former Mercury boys in a Japanese Prisoner of war camp. “If we survived Mercury we can survive this.”
The training was conducted ashore.  When the Establishment ceased to exist the ship was restored to her former glory and name, [HMS Gannet,] pre TS Mercury days when she was a sail and steam vessel of the RN of the type known as “down funnel, up screw.”  She now is now berthed at Chatham.
Choules joined the RN as a boy seaman in 1917.  In 1926 he was sent on loan to Australia.  On the voyage out he met his future wife.  Subsequently he transferred to the RAN.  He was discharged to the Reserve in 1932 with the rank of Chief Petty Officer Torpedo and Anti-Submarine Instructor. 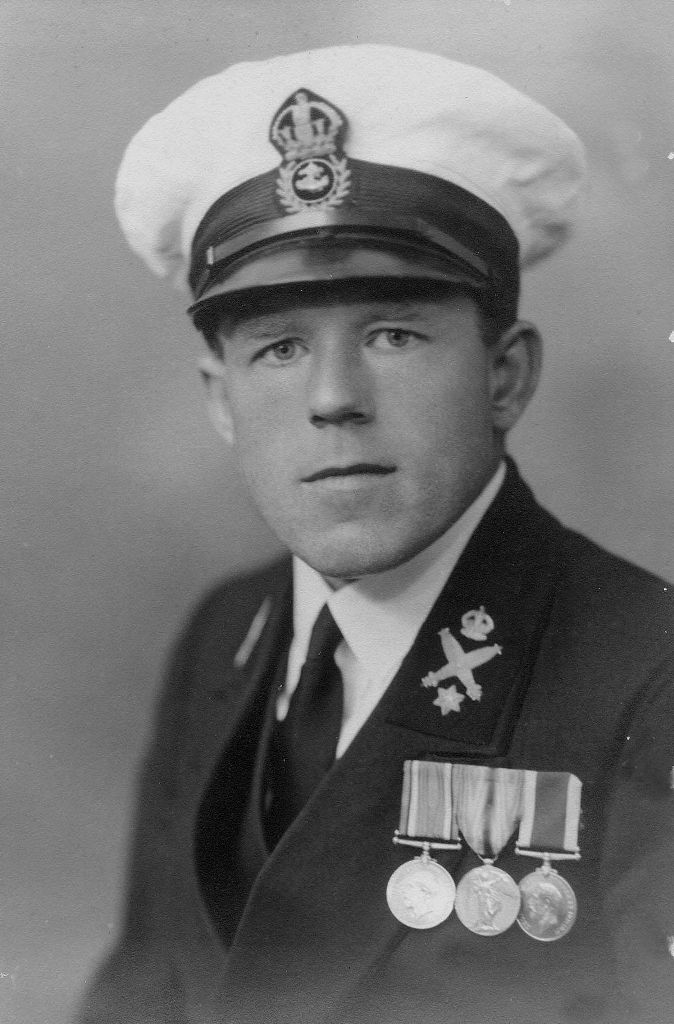 Chief Petty Officer Claude Choules c.1936
He was recalled for the Second World War and served on HMS Leeuwin in Western Australia.  His duties included being responsible to see that the installations in Fremantle Harbour and fuel tanks there were set up to be sabotaged in the event of a Japanese invasion.  He also dealt with the first German mine that washed up in Australia.
After the war he became a prison warder and then transferred to the Dockyard Police and retired in 1956.  In retirement he became a cray fisherman.  He and his wife were married for 76 years.  She lived to the age of 98.  He shunned celebrations of the Armistice as he was against the glorification of war.  He wrote his autobiography, “Last of the Last” his recipe for a long life was “Happy family, and a daily dose of cod liver oil.”  Also “Keep breathing and do not die.” 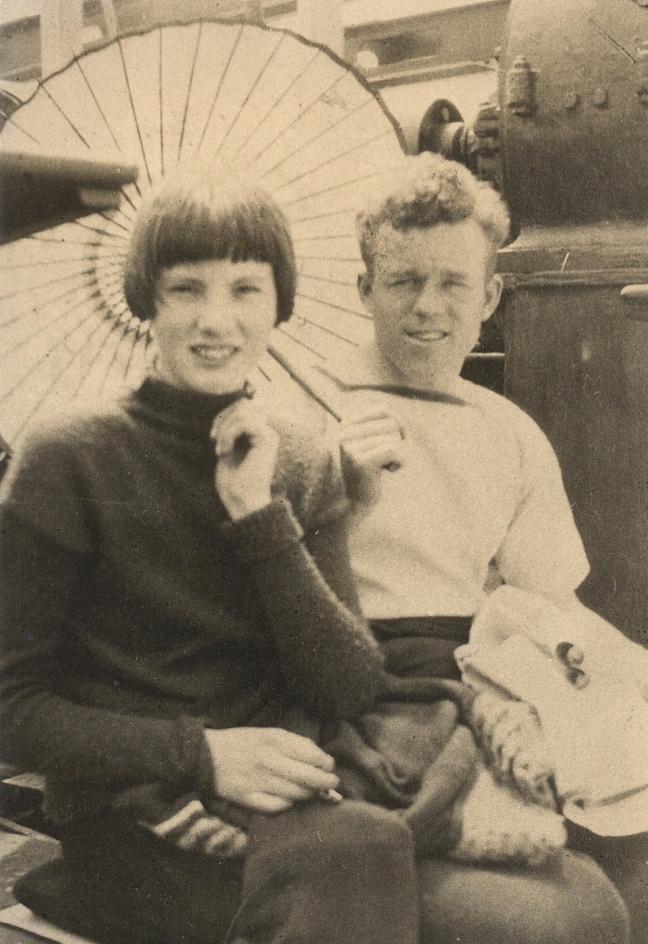 25-year-old Claude Choules and his 21-year future wife Ethel Wildgoose, aboard SS Diogenes in 1926
Choules was in fact not given a State Funeral but rather a Naval Funeral which was attended by a number of politicians.  At the time of his death he was the third oldest military veteran in the world.  He had witnessed the surrender of the German Imperial Navy at the Firth of Forth in 1918 and the scuttling of the German fleet shortly afterwards at Scapa Flow.
I have discussed the importance of the painting with several volunteers at the Community Centre/Bowling Club.  One lady said that she thought that it was not appropriate that the picture should be housed there as it was sited low down and the room was now being actively promoted by the Council for parties, often for children.
I fully agree with this point of view and would suggest several alternative homes for the picture, The National Maritime Museum, the Maritime Museum of Western Australia or if the new Northern Beaches Council does not wish to surrender the picture then perhaps the Glen Street Theatre where works of art are displayed.  I make these suggestions in order to generate a discussion.
By Roger Wickins 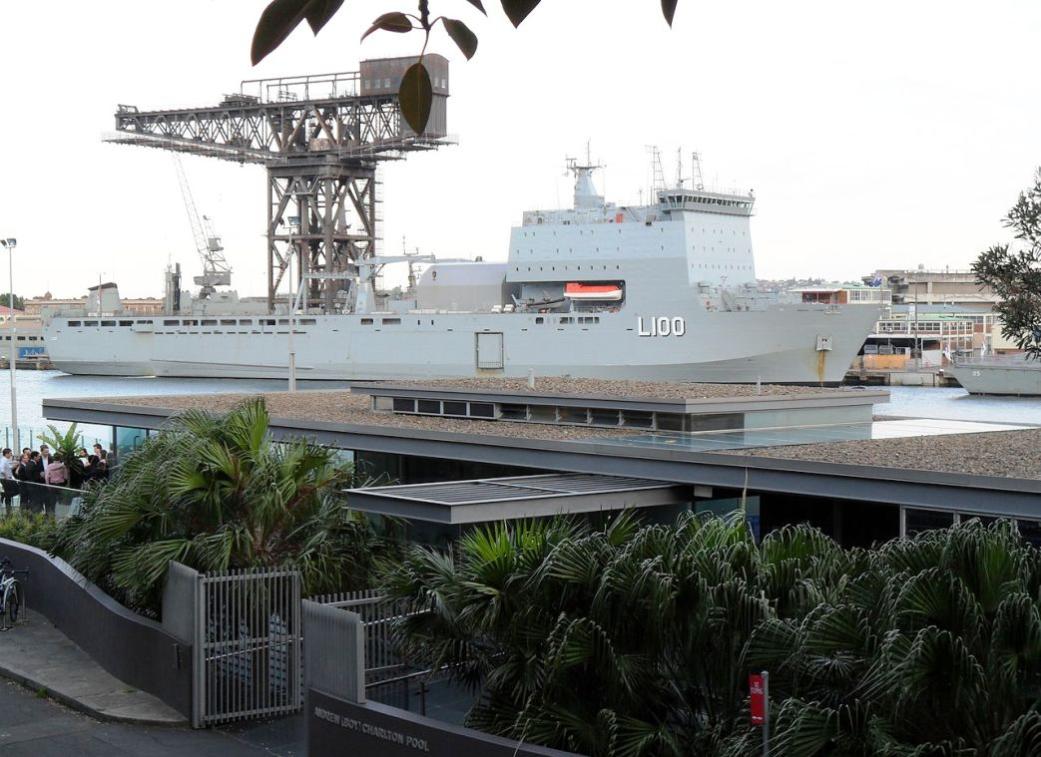 HMAS Choules, on day of arrival at Sydney, Garden Island, NSW - December 2011
On 13 December 2011, the former Royal Fleet Auxiliary landing ship Largs Bay was commissioned into the Royal Australian Navy as HMAS Choules. The decision to name the ship after Claude Choules came about because of his status as the last surviving veteran of World War I; the naming recognises the service of enlisted sailors as part of celebrations of the navy's centenary (the ship is only the second vessel named after a sailor), and also acknowledges the ship's previous service under British control (Choules served in both the British and Australian navies during his career).
Tweet