Mr Stewart, a fourth-generation farmer, has delivered outstanding results on his grazing and agroforestry property in Victoria’s Otway Ranges.

“I am very pleased to select Mr Stewart as the winner of this award from an inspiring group of candidates,” Minister Littleproud said.

“His commitment to delivering the Yan Yan Gurt Creek Catchment community revegetation program, which has restored nearly 18km of creek frontage and formed a wildlife corridor to connect several farms across the district, has been impressive.

“This is in addition to his work bringing more than 5,000 people to his farm to show what is possible and educate them about sustainable land management practices.

“It is this combination of on-ground results and ability to bring the community together that truly demonstrates the Landcare ethos and makes Mr Stewart a worthy winner of this important award.

“It is also important to recognise our finalists – Mr Justin Kirby and Mr James Walker – who are both delivering outstanding contributions to farming and their respective communities. All of our finalists showcase the true depth, dedication, and knowledge of the Landcare movement.

“These are the people who are defining the future of effective natural resource management across Australia’s natural environment, our farms and our communities. Their achievements are something that every Australian should be proud of.”

Minister for the Environment Sussan Ley congratulated all Award winners and nominees, and said the awards highlighted the important role that Landcare plays in protecting our environment and biodiversity.

“Landcare is at the front line of caring for our environment in a very hands-on way,” Minister Ley said.

“It is playing a key role in our $200 million bushfire response for native species and habitat.

“As someone whose involvement with my local Landcare group stretches back over 20 years, I have seen the inspiration that comes from recognising the achievements of those who are nominated for Awards.”

NSW Nationals Senator Perin Davey, who co-chairs the Parliamentary Friends of Landcare, congratulates Mr Stewart on winning the Bob Hawke Landcare Award for his innovative approach to incorporating agriculture and forestry in his farming business.

“Our farmers, like Mr Stewart, are not only leading the way when it comes to agroforestry but play such an important role in educating thousands of people about sustainable land management practises,” Senator Davey said.

“The National Landcare Awards are a great platform to acknowledge and reward individuals and communities across regional and urban Australia who play a pivotal role in sustainable agricultural practises and conservation.”

Senator Davey also had the privilege to announce tonight’s winner of the Australian Government for Partnerships Landcare Award, which was won by Floating Landcare in New South Wales.

“All Landcarers should be incredibly proud of the impact they have made in protecting the natural resources in their communities during these testing times,” Minister Littleproud said.

“I congratulate all award winners and thank them, not only for their contribution to Landcare, but for their inspirational leadership.”

The Floating Landcare NSW Program is one that would be familiar of Pittwater residents - numerous weed removal and rubbish collection events have taken place around the perimeter of Pittwater and on the shores of the Ku-ring-gai Chase National Park itself, with volunteers from here joining with Rebecca Mooy and her team.

Lesley Stevens, one of the co-ordinators of the Lovett Bay bushcare groups, and who has worked with Floating Landcare in the past, said on Friday; ''Richly deserved! Floating Landcare has provided a wonderful boost to our local bushcare efforts, putting big numbers of skilled volunteers on the ground that we could only dream about. When Floating Landcare arrived on a packed ferry - it felt like party-time to us. We all have great memories of these wonderful volunteers from all parts of Sydney, led by the softly spoken yet determined Bec Mooy,  giving up their time to help our local environment.''

Robyn Hughes, who is among those who have done several volunteer sessions on Portuguese Beach and one on Lion Island, after being inspired by hearing Julie Bennett’s FLC stories, provides an overview:

'For the Portuguese Beach bushcare sessions, we volunteers were picked up by Hawkesbury River oyster boat from various locations, mine being Taylors Point, and taken to this idyllic, beach-fringed natural bushland setting on Pittwater’s western shore. No roads, no cars, no houses. It’s like stepping out of life’s hurley-burley.

Helping to conserve this original bushland by removing invasive weeds is a privilege. The native flora, and the habitat is creates, are so valuable. (I was thrilled to see there a large stand of Clerodendrum tomentosum, one of my favourite local natives.)

The company on these volunteer trip is always good, willing participants working together in the natural environment they know & love, or are discovering & learning about.

There are sometimes encounters with the local wildlife. The most memorable for me, after working in thick bush, having heard a sea plane land on the beach & take off again while we worked, was returning to the beach to see a couple, standing thigh-deep in the water, clutching each other & quaking, while they watched a BIG lace monitor on the sand, devouring the contents of their gourmet picnic hamper!

Our knowledgeable and well prepared supervisors provided our lunch (and knew how to store it safely while we worked).

After each of these sessions the volunteers were ferried by oyster boat, back to their respective wharves, physically tired, but happy and re-energised by the natural environment and the escape from “civilisation”.

Floating Landcare is a deserving winner of this award, and participating in it is an enriching experience.'' 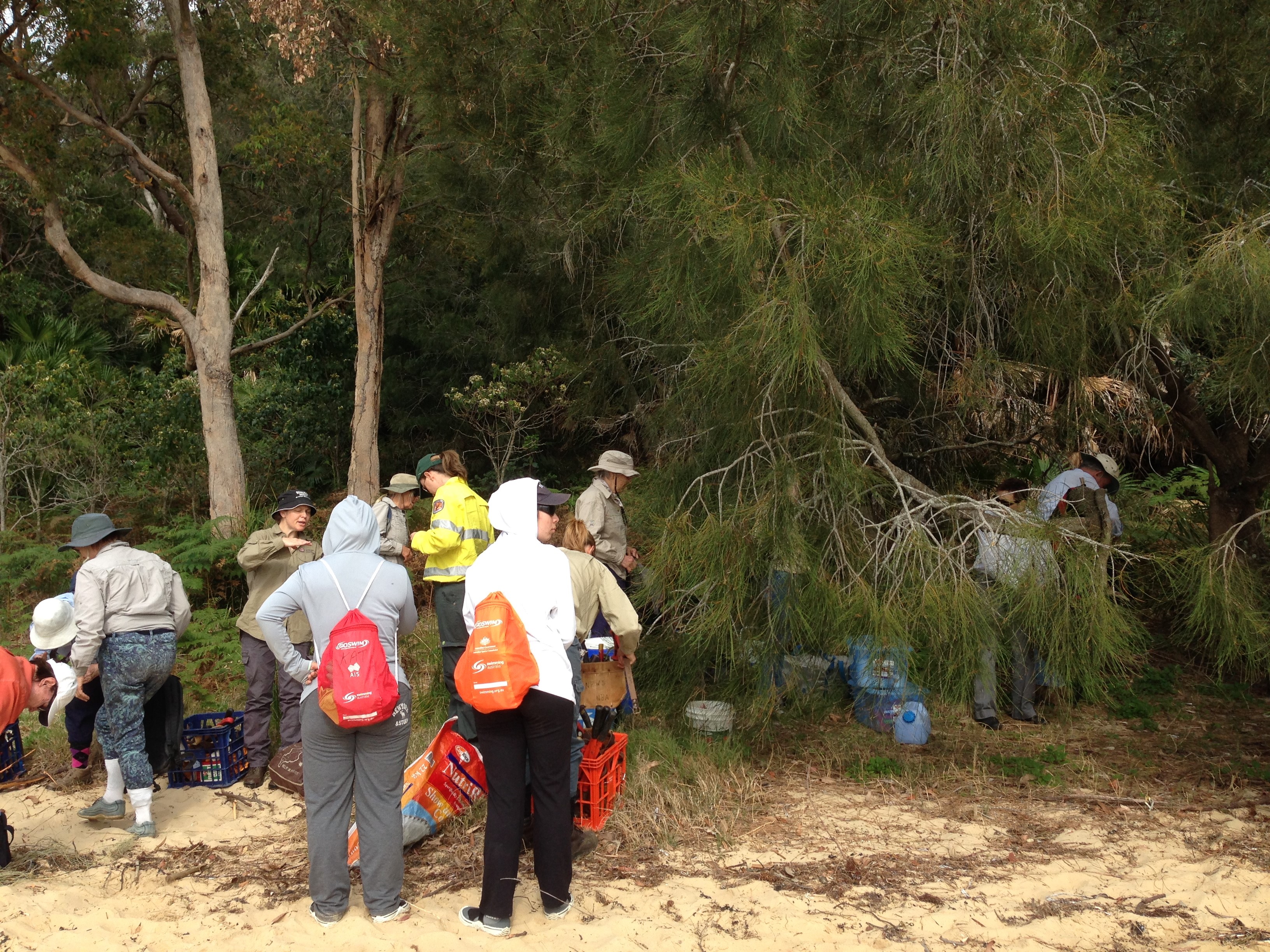 Floating Landcare volunteers working at Portuguese Beach, through the web of a Golden silk orb weaver. Photo by Robyn Hughes

The Floating Landcare Program, formally known as Workers on Water or WOW, was a concept realised in 2012.

The Floating Landcare NSW Program provides community volunteers with a unique wilderness land management experience right on the edge of Sydney. The program involves taking volunteers by boat to water access only bushland sites on Pittwater, the Hawkesbury River estuary and Brisbane Waters.

Volunteers undertake bush regeneration to eradicate invasive weed species from hotspots in the native bushland, foreshore litter collection to reduce the impact of marine debris on mangrove and saltmarsh communities and marine wildlife.

Floating Landcare is coordinated by Greater Sydney Local Land Services with the active support of its partners including Northern Beaches, Hornsby and Central Coast Councils, the National Parks and Wildlife Service and Landcare Australia. 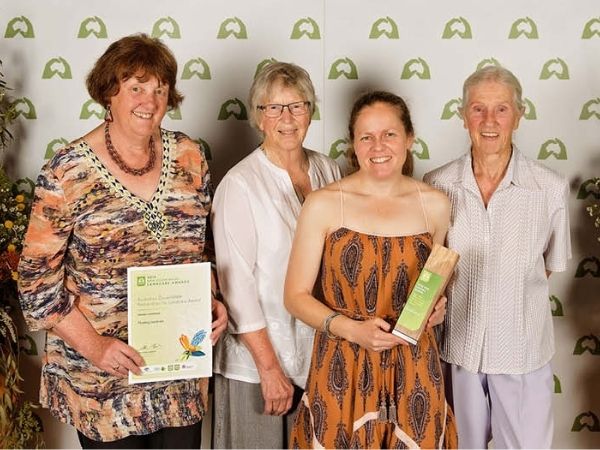 Other awards presented at this years' Landcare Conference include:

Established by Yolngu land-owners in Northeast Arnhem Land, Dhimurru Aboriginal Corporation look after 70 kilometres of beaches tarnished by marine debris within their Indigenous Protected Area. An important nesting habitat for marine turtles and internationally significant breeding populations of Bridled and Roseate Terns, the once pristine coastline is being inundated with some of the highest densities of rubbish in the world.

The Wunambal Gaambera Aboriginal Corporation holds and manages the Native Title rights and interests of the Wunambal Gaambera people. In 2011, Australian law recognised the unbroken connection held by the Wunambal Gaambera people, calling them Wanjina Wunggurr (Uunguu) Common Law Native Title holders. The Wunambal Gaambera country covers some 2.5 million hectares of some of the most ecologically and culturally significant land in Australia, including mainland and islands. Wunambal Gaambera country is a key cultural and ecological stronghold within the Kimberley region. The Wunambal Gaambera people made a Healthy Country Plan – a world first – to help them keep their country and culture healthy and to build the capacity and wealth of their families to live on their country into the future. Over the past years, an independent review has highlighted that the world-first Healthy Country Plan was a sophisticated and inspiring plan that sets a high standard for Indigenous Protected Area planning in Australia. This plan importantly has a dual emphasis on cultural and ecological targets, with the Corporation creating a fresh new way of linking measures of Indigenous health with measures of ecosystem health.

Emeritus Professor at The University of Western Australia who established the innovative ‘Know your Soil Biology’ workshops for farmers, providing hands-on activities on the benefits of soil biota for soil health/quality. For her pioneering research on arbuscular mycorrhizal (AM) fungi in agriculture and disturbed natural environments, she is acknowledged as a world leader in this field. Her research has addressed AM fungi as complex soil communities, and has focused on AM fungal interactions with plants, fertilizer management and soil amendments. Professor Abbott is also currently consolidating soil health knowledge via a project in the Australian Government Smart Farms program titled ‘Engaging digital media to more effectively build confidence in use of sustainable land management practices’. 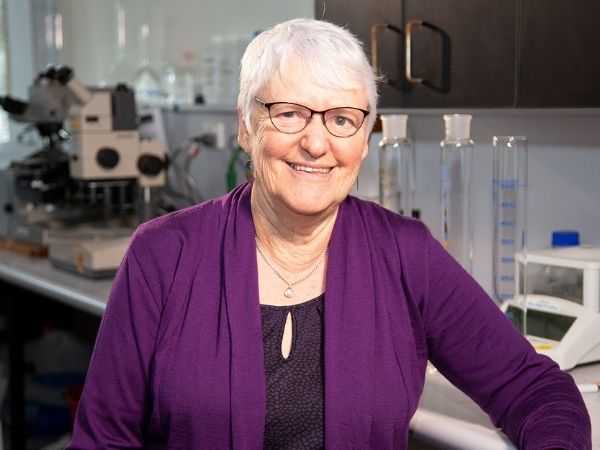 The Red Hill Bush Regeneration Group (RHR) are a volunteer group established in 1989 committed to restoring the native bushland ecology of the Red Hill Nature Reserve, one of the largest remaining remnants of endangered Yellow Box – Blakley’s Red Gum grassy woodland in Australia. When the group formed in the late 1980s, weeds covered more than a third of the reserve and woody weeds formed massive thickets. The hill was so devalued that rubbish dumping along the road in the reserve was a common occurrence. The regenerators have spent 30 years transforming the rubbish bush to nationally significant woodland, and today thanks to the many thousand volunteer hours, Red Hill boasts one of the largest, most diverse, best condition remnants of box-gum woodland in Australia and brims with over 50 regionally rare or threatened species. 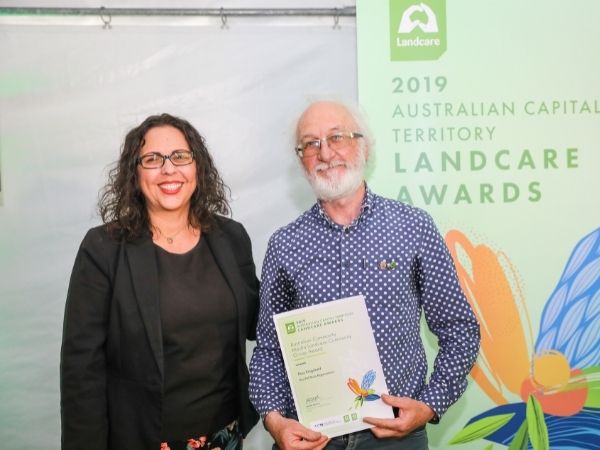 A remarkable and proud young Wiradjuri woman who Iives on Ngunnawal country, Year 12 student Dhani has a solid cultural education and has grown up involved in Caring for Country practices inclusive of seed harvesting, cultural burning, weed eradication work and native vegetation restoration. She is passionate about pursuing a career in Environmental Science Communications & Species Recovery. Dhani has pursued work and study experience opportunities in these fields with the: ANU College Biodiversity course; work experience with Tidbinbilla Nature Reserve wildlife team; and Mulligans Flat ecology team. In 2018 Dhani joined the team at the Woodlands and Wetlands Trust as a casual Community Education Outreach Officer at Mulligans Flat. Ultimately, Dhani empowers other young people to participate widely in their community, whilst also being a part of positive social change in educational spaces, cultural education and in ecological recovery actions here in the ACT.

With just 140 students and eight staff, Newham Primary School is achieving great results with its environmental and sustainability programs. Students have planted indigenous vegetation along a tributary of Deep Creek that abuts the school, creating a nature corridor for local wildlife that connects with the Cobaw Biolink. They’ve also designed and built a wetland to provide an alternative breeding ground for frogs which 10 southern brown tree frogs now call home. 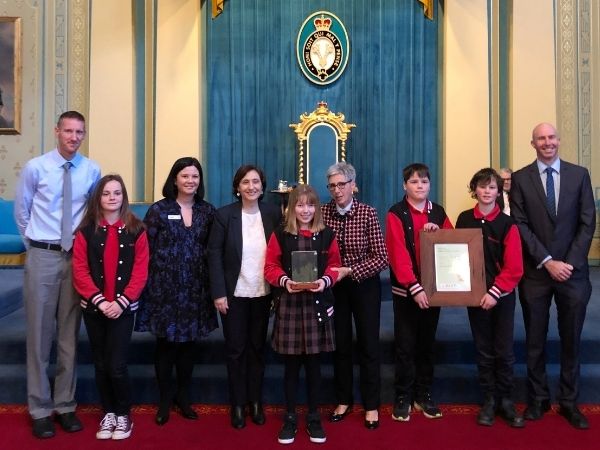 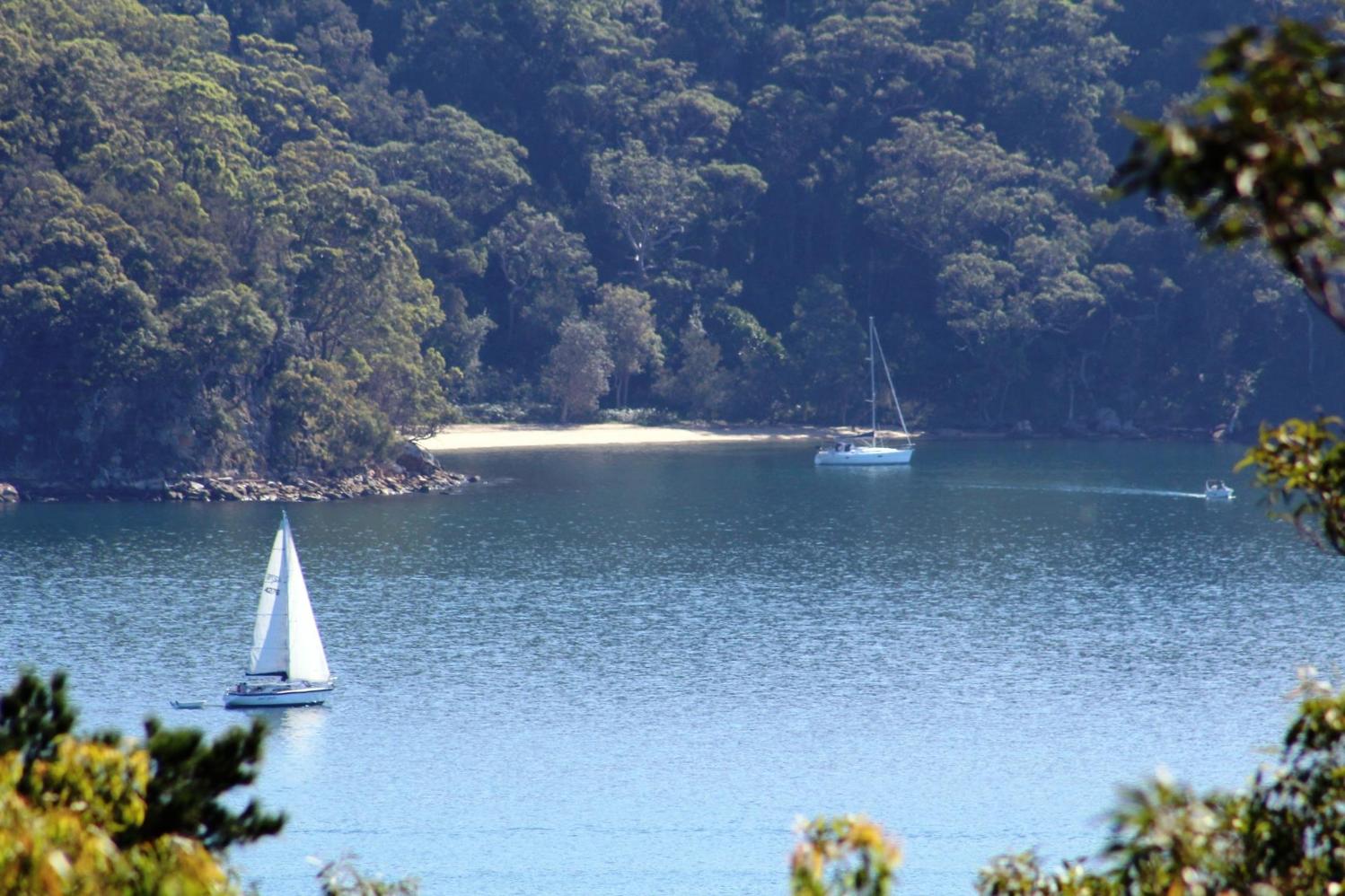