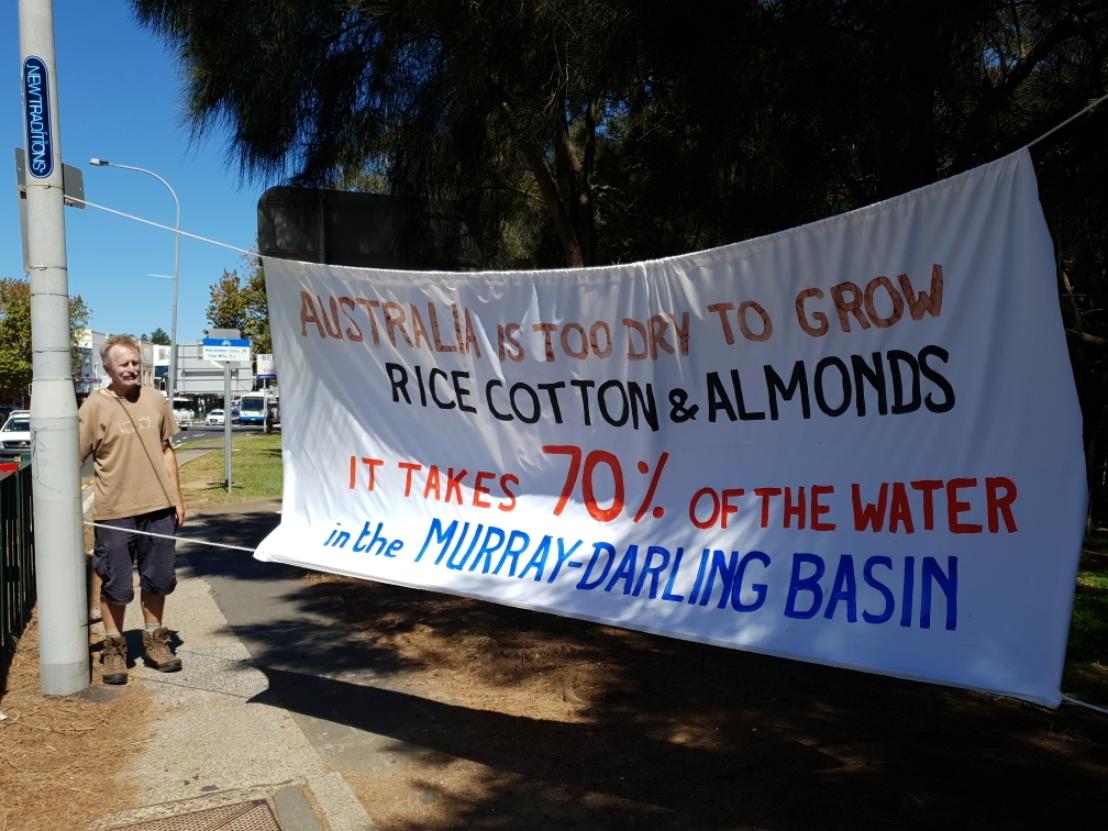 Water campaigners rallied on Narrabeen bridge on Friday – in a state-wide wave of protests - tying blue ribbons to its railings to call for an end to water trading and return of substantial flows to inland rivers.

The demonstrators were supporting Aboriginal and environmental activists who blockaded the bridge across the Darling River at Wilcannia, on the Barrier Highway – a national trunk road - to draw attention to the unsustainable extraction of river and underground waters.

The Narrabeen rally, on the Pittwater Road bridge, was organised by Pittwater Knitting Nannas in support of the Wilcannia blockade.

About 15 protesters rallied on the bridge, festooning it with ribbons and banners and collecting signatures for a petition to end water trading. Many drivers honked their horns or waved in support.

Communities in the Murray Darling Basin had no water to drink over summer as the rivers ran dry, while massive dams on cotton farms in Southern Queensland and Northern NSW retained water for irrigation, Ms Davis said.

Water in the dams was being used by agribusinesses to grow rice, cotton and almonds, which were all very water intensive crops, she said.

“We made a bit of a splash on the bridge,” Ms Davis told Pittwater Online News.

“The waters of the Murray Darling basin are flowing again but its only getting about 30 per cent of the rain from up north so the Aboriginal people are still missing out.

“Instead, big companies are now trading water from the driest country in the world and they don’t even have to own property in Australia. It’s ridiculous.”

“I believe there should be water in the rivers, not in the dams,” Mr Evers said.

“This is pure commercialism on the part of the top end of town.”

Mr Evers said the Aboriginal community had suffered because of the amount of water retained in the dams north of the Murray Darling basin.

“They knew the rivers, knew where and how to live,” he said.

“That’s been taken away from them.”

Many Aboriginal people in the towns of the Murray Darling basin have relied on water transported by truck on behalf of charities for over a year.

At Wilcannia, about 100 water activists blockaded the bridge throughout the day until police broke up the occupation about 2pm and arrested 6 protesters.

Photos on Twitter by Linda chalming @linda_chalming. Mar 13 'People did the 390k round trip from Broken Hill to protest at Wilcannia'.

The protest was initiated by Aboriginal elders and Menindee residents Beryl Carmichael and Barry Stone, along with anti-coal seam gas campaigner Ian Sutton.

At Parramatta, a delegation of members from Water For Rivers - Sydney, Western region resident students, farmers, Barkindji and other traditional owners delivered a copy of the letter sent to the Prime Minister, demanding water justice for all the people of the Murray Darling Basin - and indeed all Australians.

"The letter will be delivered today (Friday) to heads of Department of Planning Industry and Environment, Jim Betts and CEO Water Jim Bentley as well as CEO of NSW Water, in sympathy with the Wilcannia bridge blockade." the delegation stated

“stronger action [is needed] if we are to avoid the death of the Riverland and wineries in South Australia, the loss of sustainable agriculture in Victoria and a complete rural economic collapse in NSW.

“If the Menindee Lakes remain dry, then western NSW will die and there will be no future for rural communities, farmers or the Barkandji and Ngiyeempaa Traditional Owners.”

The Murray Lower Darling Rivers Indigenous Nations (MLDRIN) said Indigenous and other activists blockading the Wilcannia bridge across the Baaka (Darling river) and elsewhere in the state had sent a powerful message to the NSW government.

"Recent decisions to allow pumping of the first precious flows down this iconic river have shattered the hopes of river communities. We hoped the NSW Government had learned from past mistakes, but these secretive decisions show that First Nations' rights and interests are still being ignored," Rene Woods said.

"We may have flows in these rivers today, but we know that the cycle of massive extractions, declining river health and political cover-ups is just beginning again. Vast profits will be generated by big cotton from these natural flows. When the rains stop, will downstream communities be left high and dry again?"

"Poor river management in NSW impacts rivers and Traditional Owners across the whole basin. When the Baaka ceases to flow, all river communities pay the price," Rene Woods said. [1.]

Find out more about the Water for Rivers campaign here