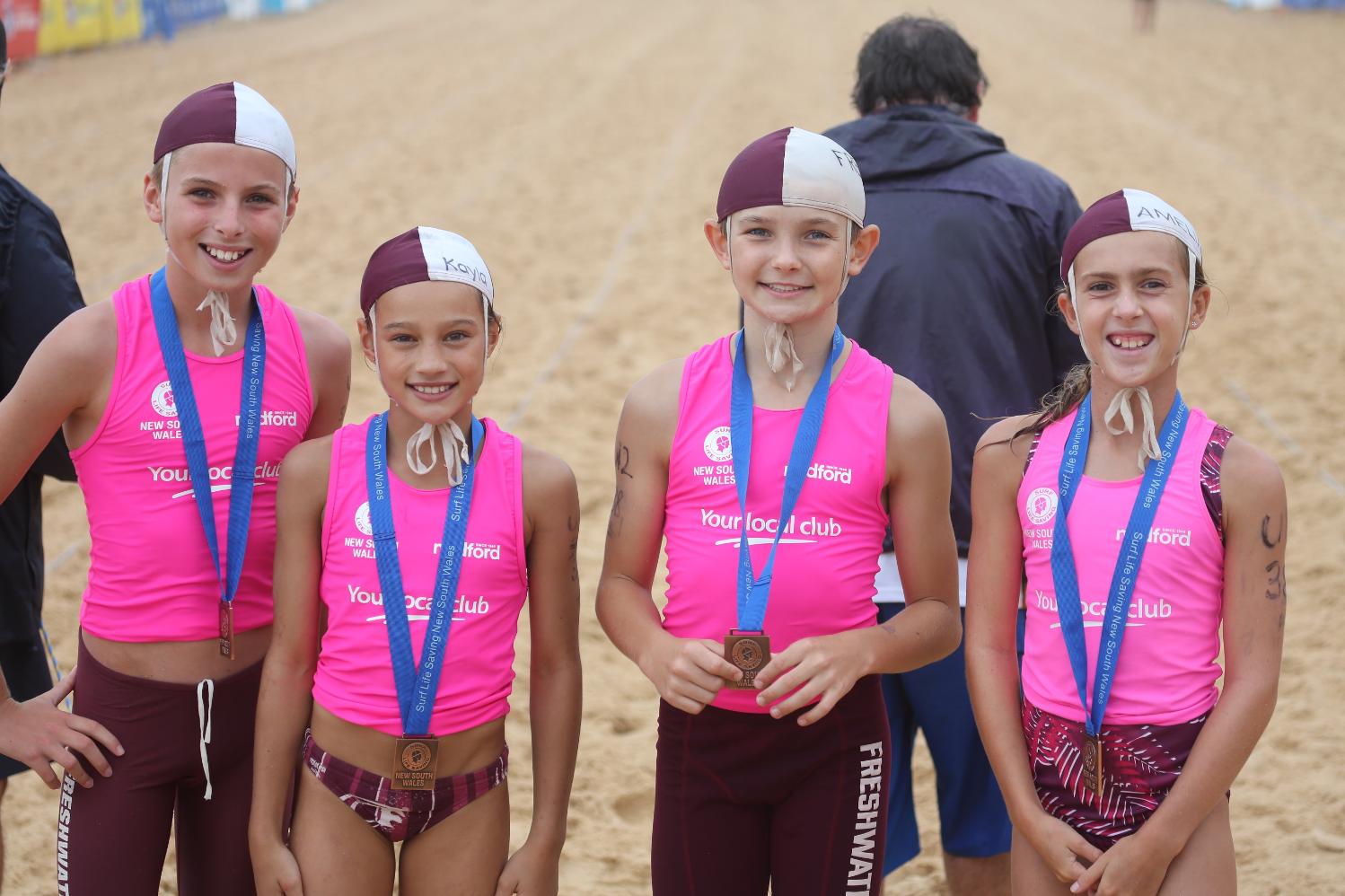 The 2022 NSW Surf Life Saving Championships proudly supported by Your local club kicked off on the northern beaches from Thursday 24 February, with thousands of the state’s best young lifesavers preparing to battle it out in the surf and on the sand.

After five years in the Lake Macquarie region, Queenscliff SLSC, alongside Freshwater SLSC to the north and North Steyne SLSC to the south, will be the scene for the first four days of the 12-day NSW Surf Life Saving Championships, with Under 9 through to U15s competing in everything from swim, board, relays, beach sprints and flags, through to Rescue and Resuscitation and the Junior March Past event on Sunday.

The volunteer work party from the host clubs have installed more than 1km of crowd control barriers, running along the iconic Manly beach strip, signalling the beginning of the three week event, the pinnacle of the Surf Life Saving NSW sport calendar.

Following a successful Country Championships just under a month ago at Cape Hawke SLSC, Surf Life Saving NSW Director of Surf Sports, Don van Keimpema is anticipating Nippers will be eager and ready to go – even if the weather isn’t playing fair.

“The heavy rain recently across the Sydney basin hasn’t come at the best time, but we’re still ready for all the best young athletes to hit the beach over the next four days,” he said.

“The State Championships is our showpiece event, our opportunity to bring everyone together from up and down the NSW coastline doing the things we love. The Age Championships are a fantastic way to kick it off.

“For the first time we have included our U15 competitors in their very own Youth Championships rather than having them compete in the Open event next weekend.

“We’ve got three fantastic beaches and we’re back in metropolitan Sydney for the first time in almost 20 years, it’s going to be a great showcase of sportsmanship and talent.

“If the weather continues to wreak havoc, we are prepared with contingency plans but we’re committed to staging these Championships as scheduled and with as minimal disruption as possible.”

The first official NSW Championship event for Nippers was held in 1968 at Merewether Beach in the Hunter branch with over 1000 young athletes.

Now, some 54 years later, we will see more than 3000 enthusiastic Nippers and young lifesavers competing at the highest level – a testament to the evolving nature of the Championships and its ability to inspire and establish great athletes.

Not even the rain could dampen the spirits of the state’s most dedicated, talented juniors as the first day of the NSW Age Surf Life Saving Championships, commenced.

An abridged timetable and program saw North Steyne see most of the action following the heavy rain that continues to lash the Sydney basin.

Hundreds of Under 9 to Under 12 competitors were the first to test the conditions, braving the ocean in the board and surf races, and tearing up the sand in the beach sprints and relays.

A number of clubs are out to end the current Age Champions North Curl Curl’s multi-year dominance but few started better than North Bondi; they showed complete authority in the beach events and finished the first day with an enviable haul of Gold medals in the relays.

Among those, Spencer Jordan-Booth, Kai Kitchen, Hugo Spierings and Jensen Lee completed their personal remarkable three-peat, taking out the U11 Male Beach Sprint Relay. It was the third straight year the team had won, with three of the four boys having also taken U9 gold two years ago and U10 gold last year.

The U9 Male and Mixed, and the U10 and U11 Female Beach Sprint Relay teams also took out their respective divisions, while Patrick Gisz was too strong in the individual U10 Male Beach Sprint.

A handful of close calls also added valuable points to the board, with Chloe Anthony and Elizabeth Somerville taking individual Silver and Bronze in the U10 and U12 categories, while the U11 Mixed and the U12 Female Beach Relay teams also finished second.

In all, 10 medals on the sand had North Bondi looking strong heading into the weekend.

For their part, defending champions North Curl Curl began their quest for a third straight Age title with a one-two punch in the U11 Female Surf Race, with Jocelyn Melbourn and Evie Davis living up to their undeniable talent to bring home gold and silver, respectively.

Athletes make the trip from up and down the NSW coastline to take part in the Championships, and it’s made all the sweeter when they can take a medal home with them at the end.

Gerringong’s Ginger Siasat started the day with a bang for the South Coast club, winning gold for the second year in the Beach Sprint, this time in the U11 category.

Ginger was certainly a favourite after her showings in the heats but was pushed all the way in the final by Terrigal’s Paige Casey, claiming the victory in what could best be described as a photo finish.

The same could almost have been said for The Lakes’ Zach Mitchell, who was leading late in the U11 Male Board Race before a string of waves helped Coogee’s Roman Szabo to be neck and neck with the Central Coast competitor less than 100m from the shore.

Having won the U10 race last year, Zach stayed calm and collected and finished strongly to take out his second win – though his eyes are already on a third!

Another to defend her title from last year in Swansea was Tully Kippax, who proved too strong for the field in the U9 Female Board Race. She is the first in a handful of Black Head SLSC juniors expected to do well this weekend, with Ella and Ashleigh Pegrum showing potential to be players in the U12 category tomorrow.

Meanwhile, after more than seven hours travelling to get to the Northern beaches, Yamba representative Clarence Dougherty won’t be making the return trip empty handed after claiming the U9 Male Board Race.

At the end of day one, South Maroubra had a narrow lead atop the table from Coogee and North Bondi.

Titles were retained and new Champions crowned as a spread of good results for local and regional clubs alike capped an excellent second day of the NSW Age Surf Life Saving Championships, proudly supported by Your local club at Manly.

With the junior March Past event still to come on Sunday morning, Coogee SLSC is looking likely to take the title with their superior total point score currently 18 ahead of South Maroubra SLSC and a further four points ahead of North Bondi SLSC.

The day was once again shaped by wild and often unpredictable spells of heavy rain and winds, conditions which at one point saw some U9 water events moved to Shelly Beach. It did little to shake a determined pair of teams from Elouera, however, with the U9 Male and Female Board Relay teams winning their respective events, showing the club has plenty to look forward to over the coming years.

Coogee, too, tasted success on two different beaches, with the Junior 5-person and Junior 2-person R&R teams winning gold at Freshwater while Max Nguyen won the U9 Male Beach Flags after looking the strongest runner throughout the event.

Avalon Beach’s Ethan Warner, on the same stretch of beach no more than half an hour later, took out the U10 Beach Flags, while Noah Pearce from Warriewood won gold in the U12s.

Defending Age Champions North Curl Curl SLSC had a pair of familiar names bringing them further success, with Jocelyn Melbourn placing first in the U11 Ironwoman and clubmate Evie Davis, who Jocelyn beat out yesterday on the way to a one-two finish in the Surf Race, finished third. Meanwhile, Reuben Te Pania was the winner of the U11 Ironman.

It wasn’t just Sydney-based clubs getting in on the act on day two, though, with many Branches tasting success across a variety of disciplines. After a long trip from the South Coast, Warilla-Barrack Point cheered their gun beach competitor, Pixie Hanson home in the U11 1km Beach Run, while Matilda Liberato from Windang was quickest off the mark on her way to U9 Beach Flags gold early in the day.

Ginger Siasat, successful yesterday in her quest to defend her Beach Sprint title in the U11s category, navigated several close calls on the way to gold in the U11 Beach Flags.

Interestingly, in beating Michaela Jenkins of North Cronulla to the flag for a second straight year, Ginger ensured the same one-two finish as 2021 in that event.

Further north, despite excellent performances from the reigning gold and silver medallists, a new winner was crowned in the U12 Female Beach Flags, with Ocean Beach’s Jessica Majsak overcoming nerves and a competent field to claim victory in the final for the Central Coast club.

The Hunter had plenty of success too, both early and late in the day, with Cooks Hill gun Taj Williams taking out the U12 Ironman in the morning before backing up in the afternoon as the final leg of a winning U12 Board Relay team that included Will Munro and Sid Burns.

In the same race, a Swansea Belmont team made up of Levi Gibbs and Mitchell and Thomas Chalmers finished in second place.

In the female events, the Board Relay team from Cudgen Headland – Isabella Arghyros, Charli Mills and Jarrah Onley – won their third straight title, this time in the U12 category.

Competition at the 2022 NSW Surf Life Saving Championships was suspended for the remainder of Saturday due to reports of cases of a gastro-type illness among some of the spectators and competitors.

All water and beach events at Manly, Queenscliff and Freshwater beaches were suspended with further information to be provided to Team Managers later in the day. Surf Life Saving NSW has consulted with NSW Health and was awaiting further advice.

NSW Health are aware of a significant outbreak of gastro-type illness throughout the Sydney area including on the Northern Beaches and in the interests of safety of competitors, officials and spectators, SLSNSW sought further advice to assess the situation ahead of Sunday's scheduled conclusion of the NSW Youth Championships.

The Competition Committee advises of the difficult decision to cancel the remaining events for the 2022 SLSNSW Youth Championships. The Open Lifesaving competition scheduled for Sunday 27 February is suspended and further advice on scheduling will be provided in due course. The decision is made based on deteriorating weather conditions with the health and safety of our members in mind.

As people would be aware Sydney has experienced on-going and significant rainfall over the past week. This has impacted water quality of all beaches on the Northern Beaches and significantly at Queenscliff due to the opening of the lagoon.

The Competition Committee has met and reviewed the forecast for the week ahead and there is to be ongoing significant rainfall which will continue to affect water quality. This is coupled with a significant spike in the swell, with sea conditions predicted to be considered dangerous from Wednesday through Sunday next week. Given the expected direction of the swell, all contingency locations will be unsuitable for competition.

The safety and wellbeing of competitors and volunteers is always at the forefront of any Championship Committee decision. With a view to communicate changes to the competition schedule, mitigate disruption to travel and accommodation arrangements and ensure as many Championships events are conducted, The Committee has determined the following:

Masters water competition is postponed with a date to be considered and further advice forthcoming: