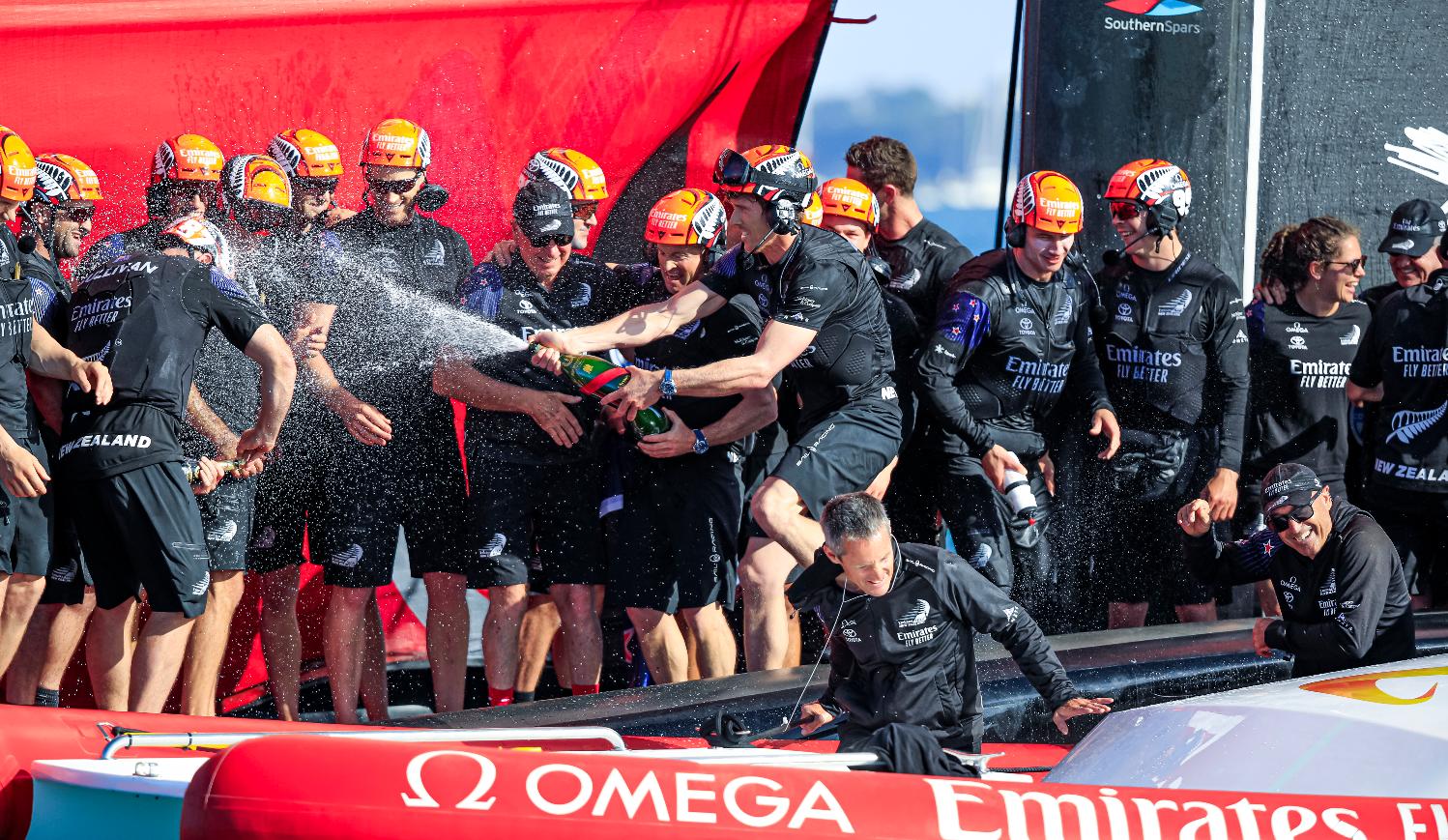 New Zealand has entered the history books and won the America’s Cup for New Zealand for the fourth time. On day 7 of the 36th America’s Cup presented by PRADA, the Kiwis scored the 7th point they needed to raise the Auld Mug in front of thousands of spectators.

This is a spectacular achievement for Emirates Team New Zealand and the yacht club they represent, the Royal New Zealand Yacht Squadron, and confirmation that – in sailing – the Southern hemisphere country of 5 million people can punch way above its weight.

With the home team just one win away from the 36th America’s Cup, if the sense of occasion wasn’t producing enough tension ahead of the seventh day of racing, the weather was adding extra pressure, teasing all as the sea breeze appeared reluctant to develop.

As start time drew closer there was little sign of the breeze, forcing a postponement. But then, as the clock counted down the breeze started to build and after a  30minute delay Race 10 was underway.

As both came back towards the line Emirates Team New Zealand had started to windward of Luna Rossa Prada Pirelli, coming in slightly late to the line and tacking off onto port straight away to take the right-hand side of the course. Luna Rossa Prada Pirelli found themselves in a right-hand shift and were unable to tack across. The Kiwis were able to lock into the right-handed breeze and gained the early advantage.

As the pair came together the Kiwis tacked in front of Luna Rossa forcing the Italians to tack back onto starboard and allowing themselves to go back to the right-hand side of the course. A strong tactic following a solid and confident start.

As the pair came back together for the second time the Italians had made distance and ducked the Kiwis as they crossed. Luna Rossa were now able to get to the right-hand side of the course.

As the breeze fluctuated the key was to get into phase with the breeze.

Around gate 1 it was Emirates Team New Zealand that led by 7 seconds taking the right-hand mark while Luna Rossa Prada Pirelli took the left-hand mark. A split was what the Italians wanted if they were to find a passing lane on the downwind leg. The Kiwi task was to close down the opportunities. Downwind, having swapped sides the Kiwis were sailing at 41 knots to the Italians’ 39 knots but as the pair came into gate 2 the game was still close as Luna Rossa trailed by just 9 seconds.

Meanwhile, Emirates Team New Zealand headed out to the right-hand side of the course, protecting their position whenever required. But as the second beat unfolded the Kiwis started to stretch out their lead, increasing the distance to around 300m on the water.

By now they were free to choose the mark that they wanted at gate 2 taking the left-hand side and leading by 27seconds. Luna Rossa split once again taking the right-hand mark in an effort to find a different and quicker route down leg 4.

But even if they were to find more breeze, the Kiwis were sailing consistently quicker and had pulled the distance out to over 500 m. By gate 4 that had translated into a lead of 37 seconds as they rounded the left-hand mark to head out to the left-hand side of the course.

Behind them Luna Rossa took the right-hand mark and did the more difficult move to get out to the right-hand side of the course and continue to keep out of phase with their opponents. The third upwind leg offered little in the way of a comeback for the Italians. All they could hope for now was for their opponents to make a mistake.

Through the last gate, Emirates Team New Zealand took the right-hand mark rounding 49 seconds ahead as they headed off on the last leg of what would surely be the last race in the 36th America’s Cup.

A race and a win that would see them take the oldest sporting trophy in international sport. After 10 races and a score line of 7:3 the America’s Cup was New Zealand’s once again.

Luna Rossa Helmsman and Pittwater sailor Spithill has refused to let the disappointment of losing the America's Cup get in the way of delivering a classy message of congratulations to Team New Zealand.

Moments after TNZ retained the cup on Auckland's Waitematā Harbour, Spithill was on the race communication system, thanking regatta organisers and paying tribute to the victors.

"Pete, if you can hear me, congrats mate, to you and the whole team."

Spithill has frequently been the thorn in Team New Zealand's side, but New Zealanders have grown to like the competitive Australian. Later, Peter Burling of Team NZ thanked Spithill and Francesco Bruni for their fierce efforts on the water and some of the Luna Rossa crew joined the New Zealanders for some post-race celebrations. Burling explained that they are quite good friends off the water and that the last few years of trying to outthink each other, or figure out what the other was up to next, could be relaxed for a while now.

James said after the race,

“Obviously it’s not the result that we wanted, we went out there today to try and win a race and to get ourselves back into the competition, but at the end of the day, Emirates Team New Zealand was simply too strong. It really did feel, at times, like we were taking a knife into a gun fight, we fought as hard as we could every day.

I’ve got to say, this was definitely a change for me. I mean, in the previous campaigns I had been 10 years with the same team and coming into the Italian team I was really the only non-Italian on the sailing team and boy what an incredible culture and team of people: so passionate!

The Italians and Sardinia in Cagliari embraced me and really it’s a big family. So I’m just so thankful to have been embraced into the culture and I really hope I get to do it again. I’ve enjoyed every single minute and it’s definitely been in my career one of the most best campaigns, because of the people."

While Luna Rossa were able to get on the board early in the regatta, the Kiwis found their comfort zone on the vessel and it showed at the back end of the series as the Defender came through to win five straight races to overturn a 3-2 deficit into a 7-3 win.

Unfortunately, due to Covid-19 precautions and wind conditions, the preferred course – Course C off North Head – was only used for one race. That race was the most exciting of the series, and Spithill said if he had one regret for the series it was that they couldn't use that course more.

The Luna Rossa co-helmsman has signalled his intention to return to the arena for the 37th America's Cup.

"I love the fight, I love competing. That's my fourth Cup final in a row and I'm two wins, two losses. I can't leave it there; I've got to tip it the right way," Spithill said.

On the evening of the first day of the 36th edition, which kicked off March 11, 2021 in Auckland, James Spithill became the first helmsman to compete in four America's Cups in a row and his team’s victory in the second race of the day made him the helmsman with the highest AC race wins (15), ahead of Russell Coutts with 14 and Dennis Conner with 13.

NB: the boxing kangaroo 'logo' on his 36th America's Cup helmet - was also on his sleeve.

The Boxing Kangaroo originated with Australia II and the 1983 America's Cup won by Australia, with Pittwater sailors as part of that campaign too.

James Spithill is the youngest skipper to win the America’s Cup, which he won twice and consecutively (2010 & 2013), making him a tie (R Coutts-14) for most AC race wins as Skipper.

He is a multiple World/National Champion in both Fleet and Match racing, 2 Sydney to Hobart wins, current record holder on Comanche. He is a World Sailor of the Year and Australian Sailor of the Year and is recognised for having led the biggest comeback ever in the history of international sport, coming from 8-1 down, to win 9-8 during the AC34 in San Francisco 2013.

Jimmy, as helmsman for Luna Rossa in the AC32, was in his 7th AC Campaign.

His parents, Arthur Spithill and his wife, Jennifer, used to sail 35-footers, but James grew up sailing dinghies - the family part of the 'water access only' tribe of Elvina Bay. Siblings Katie and Tom are also among Australia's best sailors. 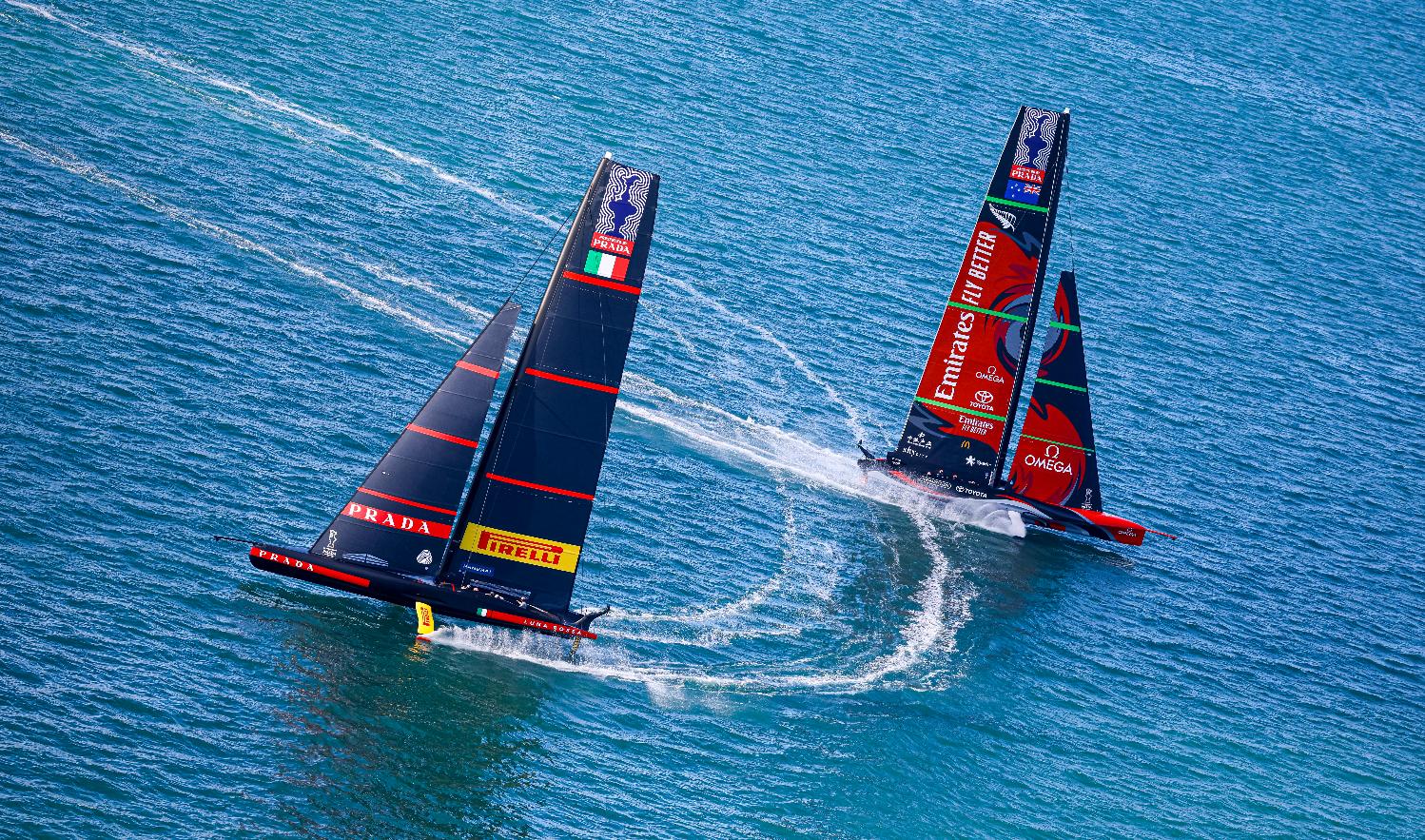