Staff from the Mona Vale Upgrade East called in the services of Sydney Wildlife volunteer Margaret G. Woods earlier this week to relocate a nest of Lapwing plover eggs found during works near the Pittwater RSL.

Margaret relates:
We arrive at 10am in long sleeve tops, long trousers, hiking boots, high vis vest. Plan is to extract eggs and usher birds to top of hill. Well they don't know where eggs are so we have to find them. The birds are not happy, swooping and calling. I explain that eggs are camouflage colour; green and brown and larger than hen eggs. Eventually after a few passes we find the eggs. I scoop them up and place in the lovely knitted bird nest with some extra nesting grasses. We place that in plastic box. We are getting a few close passes. 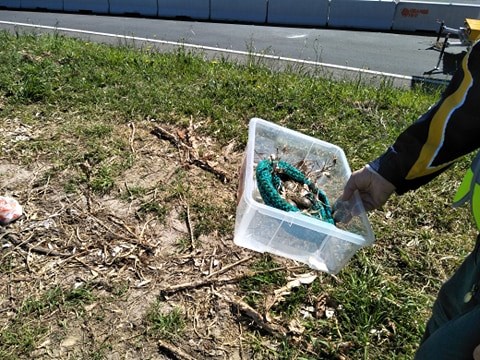 We start the process of enticing the lapwings towards the removed nest. We put it back in next position. Then start walking with it. Then stop. Meanwhile a worker from Georgiou has umbrella and ushers the birds. 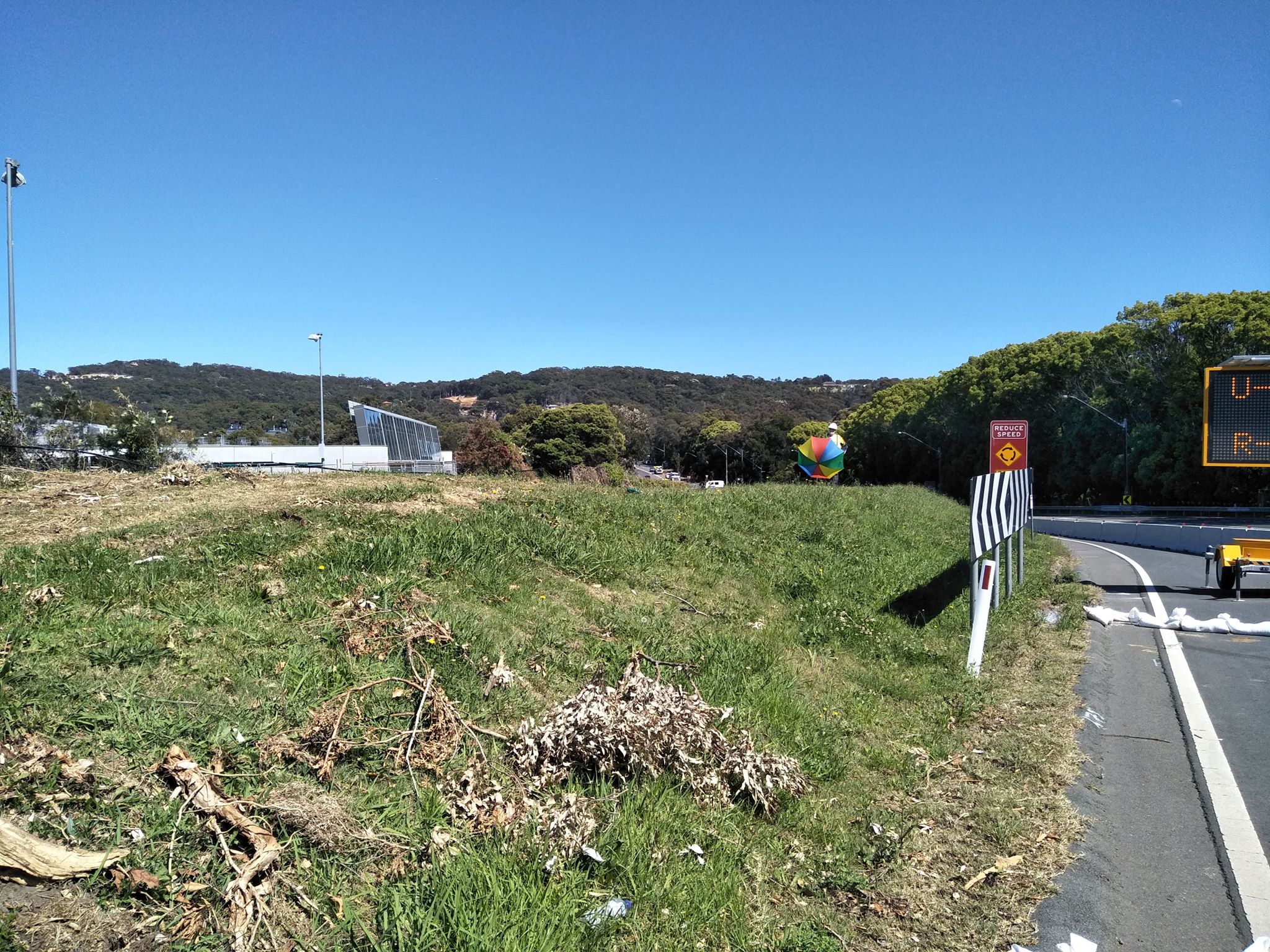 They keep flying fast at us and also across road to park. We eventually run out of hill. So we decide to move them ie drive eggs around to Emma street and place in park there. Hoping they will see and find them. I place eggs on the grass and the bits of nesting. The birds are curious.
I place them in full sun and they come closer. I back off. We both back away. They inspect then swoop back across the road at Georgiou staff. They come back and inspect again. We leave them. 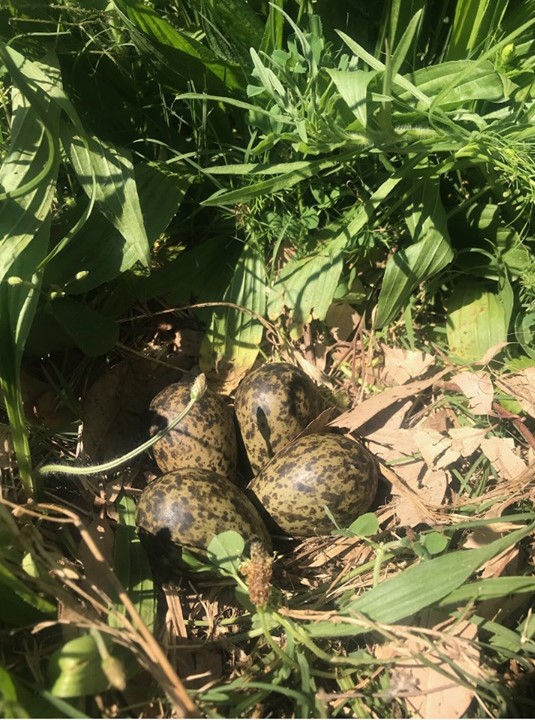 October 22nd: We drive past this afternoon. One lapwing on nest. The other is guarding it. So I get out of car to take a pic. Realise I've been spotted by lapwing, decide best not to harass them so hop back in car. Happy to know they are with eggs. We will check again tomorrow. (The eggs were collected from on hill north facing, so hot. I put them in sunniest spot, and hope they survive) I also showed all the workers what they looked like. So amazing. Carolyn is astounded.
Update (3pm October 24th) They have hatched! Parents patrolling so give them space and leave them alone.
I had advice from our bird expert Carolyn Sydney Wildlife all the way for the equipment required. Georgiou were nice. The egg photo was taken by Georgiou staff. Other photos by me.
Once again Sydney Wildlife volunteers have saved some of our local animals - a great outcome during Bird Count week!
The project manager advises that the contractor (Georgiou) has a 24 hour hotline 1800 413 640 (Monday to Friday) where people can report any issues or concerns – including the identification of fauna.
On the weekends, when crews are not onsite, wildlife reports need to be made to Wires or other local wildlife groups, including Sydney Wildlife - Ph: 9413 4300.
A Fauna Officer is on site prior to any tree/habitat removals, especially during the Spring Breeding Season. Reminder: NSW Law protects all Native Animals.
Below: Margaret's photos of the roadworks adjacent to Pittwater RSL - taken October 24, 2019 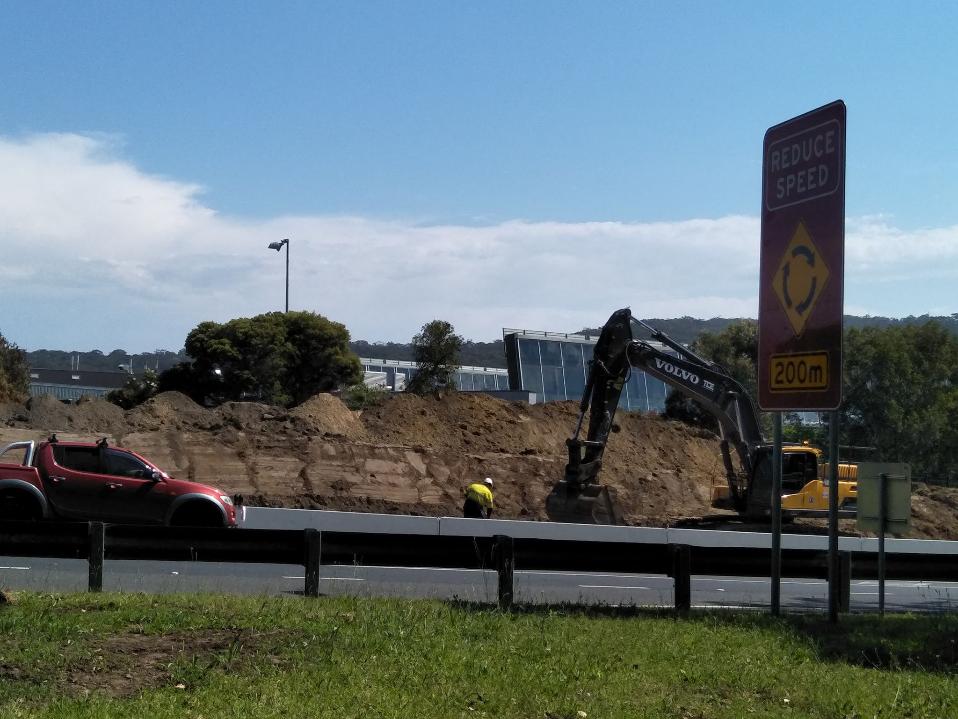 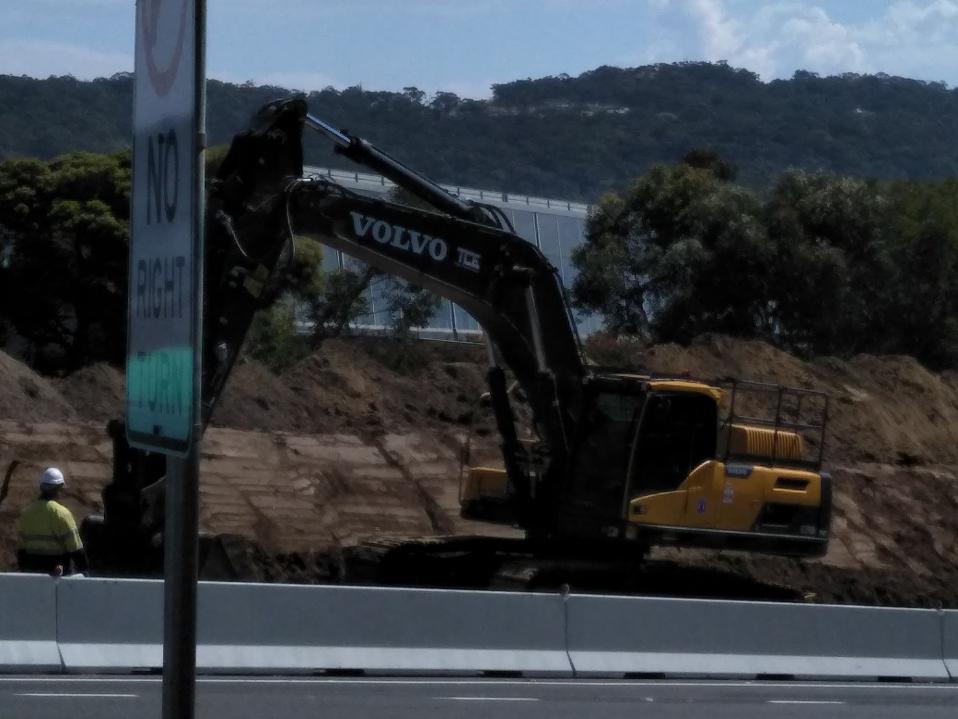 We will continue out of hours work along Mona Vale Road.

We will work from 8pm to 5am on the following dates, weather permitting:

During out of hours work on Monday 28 October, we will complete rock excavation along Mona Vale Road using a stop/slow arrangement. Please allow additional travel time, keep to speed limits and follow the direction of traffic controllers and signs.

If work is delayed due to wet weather, we will try and work a different night within the same week. We will notify residents closest to the works if the dates change from the above.

Our work will include:

To minimise the impact of night work on residents, we do not work for more than two consecutive nights in the same area and will work only 10 days within the same month. If you are eligible for Alternative Accommodation you will be advised within 24 hours of the work.

We will close one lane of Mona Vale Road in the night and reduce the speed limit to 40km/h to ensure the safety of motorists and workers. A stop/slow arrangement will be in place with traffic controllers and signage directing traffic.

Enquiries and registering for work updates

If you need help understanding this information, please contact the Translating and Interpreting Service on 131450 and ask them to call us on 1800 413 640. 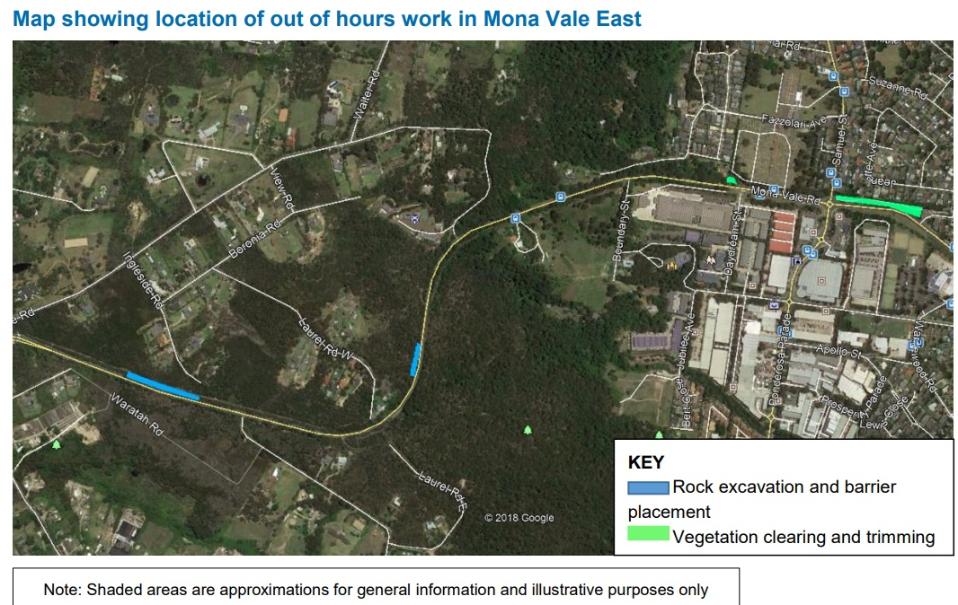 The Masked Lapwing (Vanellus miles; name from the Latin for soldier and refers to the spurs, which give an armed appearance), previously known as the Masked Plover and often called the Spur-winged Plover or just Plover in its native range, is a large, common and conspicuous bird native to Australia. Its Aboriginal name: ‘baaldarradharra’.

This species is the largest representative of the family Charadriidae, at 35 cm (14 in) and 370 g (13 oz). The subspecies found in the southern and eastern states (Vanellus miles novaehollandiae), and often locally called the Spur-winged Plover, has a black neck-stripe and smaller wattles. (Note that the northern-hemisphere Spur-winged Plover is a different bird.)

The birds have a wide range of calls which can be heard at any time of the day or night: the warning call, a loud defending call, courtship calls, calls to its young, and others. Since this bird lives on the ground it is always alert and even though it rests it never sleeps properly. Masked Lapwings are most common around the edges of wetlands and in other moist, open environments, but are adaptable and can often be found in surprisingly arid areas. They can also be found on beaches and coastlines. Vanellus miles novaehollandiae spread naturally to Southland, New Zealand in the 1930s and has now spread throughout New Zealand, where it is known as the Spur-winged Plover. Breeding usually happens after Winter Solstice (June 21).

The nesting pair defends their territory against all intruders by calling loudly, spreading their wings, and then swooping fast and low, and where necessary striking at interlopers with their feet and attacking animals on the ground with a conspicuous yellow spur on the carpal joint of the wing.

The bird may also use tactics such as fiercely protecting a non-existent nest, or a distraction display of hopping on a single leg, to attract a potential predator's attention to itself and away from its real nest or its chicks after they have commenced foraging. There seems to be some significant use of language to guide chicks during a perceived dangerous situation. Long calls seem to tell the chicks to come closer to the calling bird; a single chirp every few seconds to ask them to move away.

There is a much-believed but incorrect myth that the spur can inject venom. The myth may have been based on fear of the Masked Lapwing's territorial behaviour. Attacks are most vicious on other birds such as ravens, and also on cats and dogs, but once the chicks reach 60% of full size after 2–3 months, the chances of this happening decrease. Strikes are much rarer on humans since they are more aware. Sometimes the bird can damage its wing in a strike but usually survives and is flightless as the wing heals.

Some Masked Lapwings, especially those that live in residential suburban areas, may never successfully breed due to increased disturbance from domestic pets, people on footpaths and cars. Commonly two birds are seen together, a male and a female which are almost identical. Many also can be seen in groups at times, especially during feeding on coastlines. The chick reaches full growth after 4 to 5 months and will often stay with the parents for 1 to 2 years resulting in family groups of 3 to 5 birds nesting in one location over the summer. 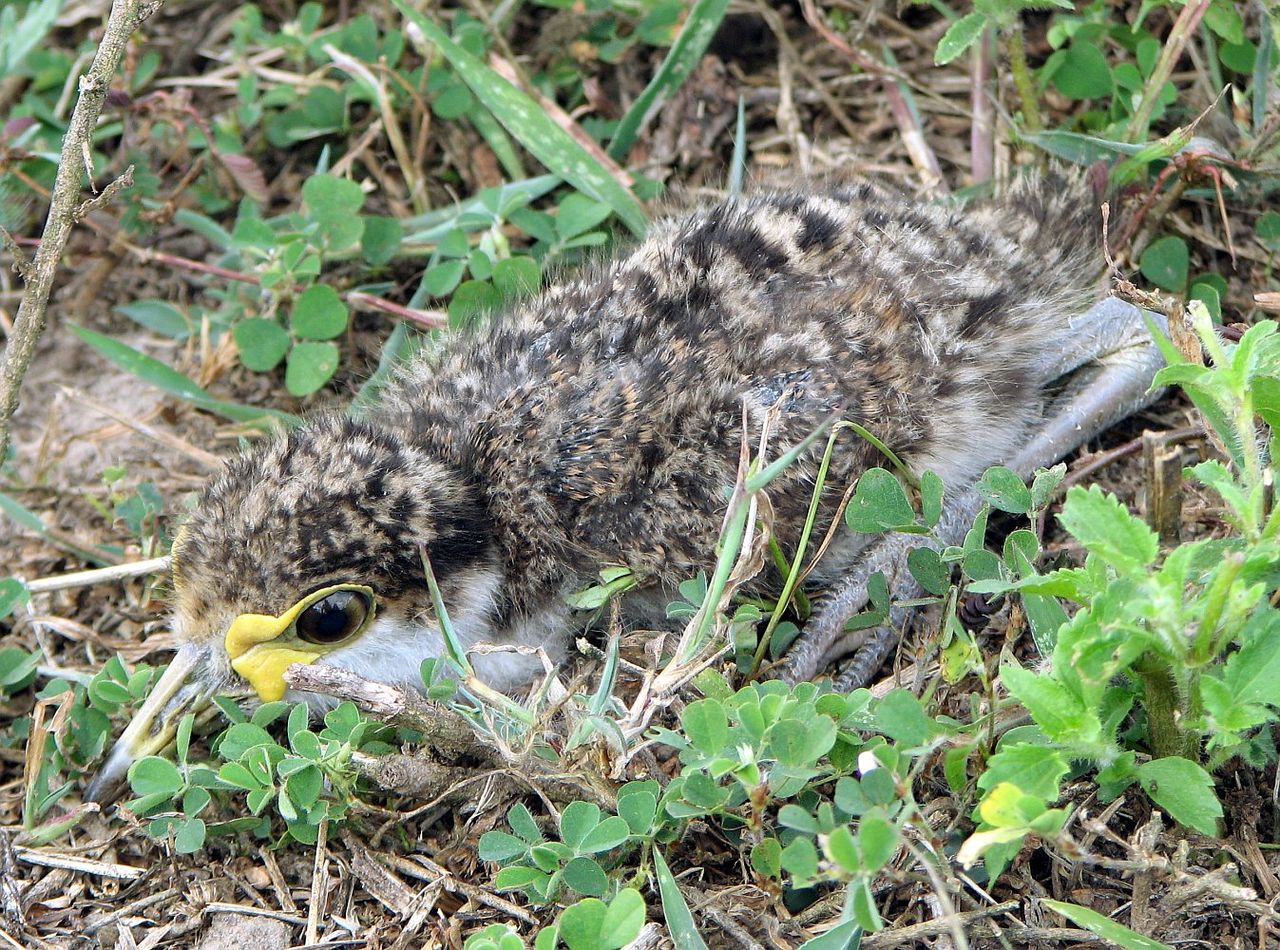