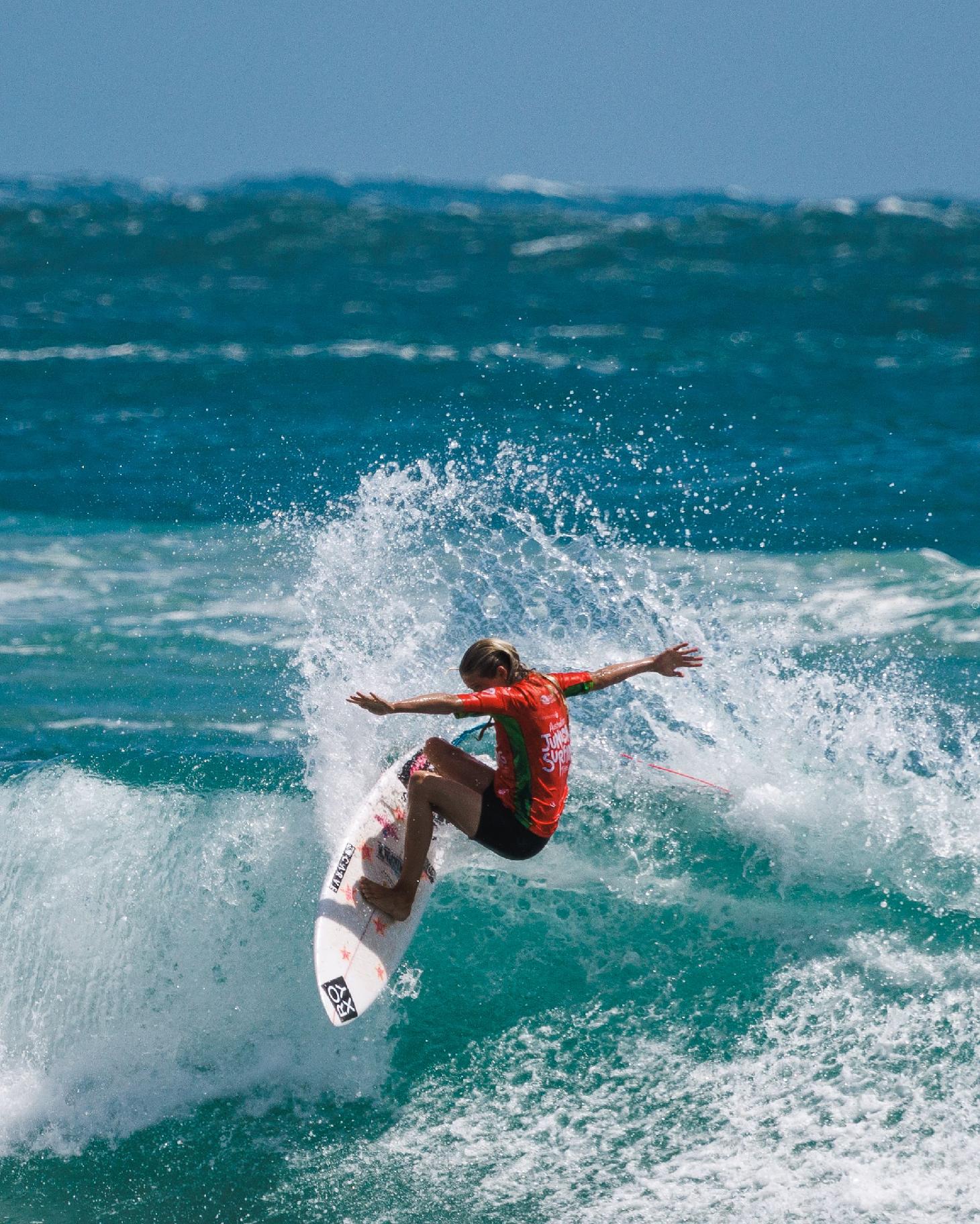 It was a day of impressive airs, close contests and making dreams come true at the finals of the 2022 Woolworths Australian Junior Surfing Titles. New South Wales and Queensland dominated the competition with all six new Australian champions hailing from the two States.

Winners of the U16 & U18 Men and Women qualify for the 2023 Junior Irukandjis team to represent Australia at the 2023 ISA World Junior Championships.

The event made a comeback after a two year break due to COVID-19. Last held in 2019 at Margaret River in WA, this year it went back to North Stradbroke Island (Minjerribah), Queensland for the first time since 2015.

Surfing Australia Contest Director, Glen Elliot said: “The Australian Junior Surfing Titles is the final major counting event on the National Junior rankings, which holds a very prestigious 10,000 points for every age division winner and the chance to secure one of the three team positions in the Junior Irukandjis to represent our country at the next ISA World Juniors. The winners of the U18 and U16 divisions at the competition also secure another position in the National team. So there is a lot on the line at this years event. I know the kids will be focused and ripping and we are looking forward to some really progressive surfing.”

Surfing Australia CEO Chris Mater said: “We’re excited to see the return of such a premier event with major sponsor Woolworths on board as the official partner and Ruffie as a support partner. North Stradbroke Island (Minjerribah) offers a variety of wave options and is a fantastic location for junior talent to showcase their skills on a national stage and set them on a path to compete in world class and Olympic surfing.”

The event commenced with an opening ceremony on Saturday November 26th before surfing started on Sunday, 27th November and ran through to Saturday, 3rd December.

In the U16 Women, Isi Campbell (Denmark, WA) blitzed her opposition with a total heat score of 13.25.

Round one of the U18 Men saw Willis Droomer (Jan Juc, VIC) post the highest individual wave score of 7.10 and best heat total of 13.60. Eden Hasson (Port Stephens, NSW) was also strong ending the day on 11.75 points.

In the U16 Men, Zyah Hession (Coolangatta, QLD) came out on top with a total heat score of 12.50. Fletcher Kelleher (Freshwater, NSW) finished on 12.45 points and will also progress directly to round three.

Kelleher said: "It was pretty fun, the waves are pretty good for a comp and the sun is out." 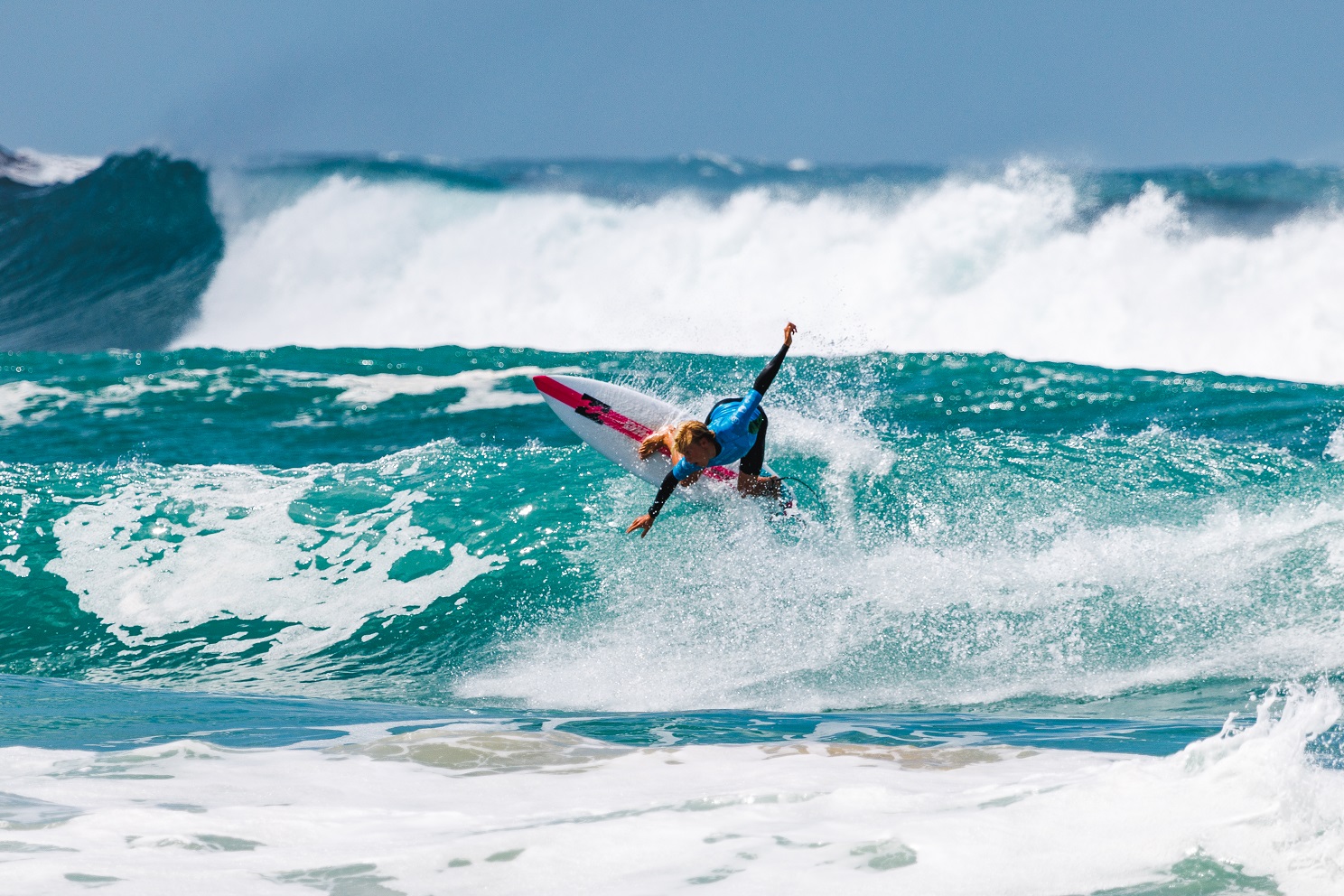 The non-elimination round one heats continued on November 28th under smaller conditions.

In the U14 Girls, Meika Locke (Palm Beach, QLD) posted the highest individual wave score of 8.75 to finish with a 12.75 heat total. Jai Nield (Coolangatta, QLD) was the best performing surfer in U14 Boys with a heat total of 13.35.

Round two got underway in the afternoon, with only half a dozen surfers in the U16 and U14 Boys and Girls progressing through. Among those who made the cut was Mitchell Henderson (Port Noarlunga, SA).

Henderson said: "Even though how small it is, it's so good out there. It's just pumping. Happy with myself, first ever heat I've got through in a comp like this."

Surfing Australia Contest Director, Glen Elliott said: "We had an unexpected decrease in the swell today but still great for the U14 Boys and Girls. We're anticipating a swell increase with the top seeds hitting the water tomorrow and great conditions forecast in the morning with a southerly wind change that will be challenging for surfers competing  in the afternoon."

The third day of the Woolworths Australian Junior Surfing Titles saw the completion of the Under 14 Girls heats with the 12 top contest surfers progressing through to the quarter finals.

Competing in the final heat of the day Meika Locke (Palm Beach, QLD) posted the highest score of the round finishing on 12.75. Eliza Richardson (Sunshine Beach, QLD) also impressed with the highest individual wave score of 7.75 to win her heat on a total of 12.65. While Olive Hardy (Gnarabup, WA) ended with a heat total of 10.90.

The rest of the day involved the schools divisions with the Allstars and the MR Shield for both Boys and Girls U19 and U16 fighting it out to win a spot in the finals to be held the next day.

Surfing Australia Contest Director, Glen Elliott said it was a day of upsets with state champions among those knocked out of the competition.

"The contest was ready to go at Main Beach before the conditions started to deteriorate. The wind and the swell picked up quite quickly so the call was made to relocate to Deadman's Beach and set up again," he said.

In Round 3 of Under 18 Women Willow Hardy (Gnarabup, WA) and Urara Saito (Gold Coast, QLD) led the charge winning their early heats. But the standout surfer was Keira Buckpitt dropping a 9.00 opening ride in heat three to finish with a 15.00 two-wave score.

The first day of Summer felt more like a winter blast when surfers hit Cylinder Beach for Day 5 of the Woolworths Australian Junior Surfing Titles.

In an action-packed day of competition semi finalists were decided in the Under 18 Women and Under 14 Girls divisions with surfers charging in the clean, offshore conditions.

Surfing Australia Contest Director, Glen Elliott said: “Relocating to Cylinder Beach proved to be a really good move. We scored great waves all day, from 2ft in the morning steadily rising into the 3-4ft range in the afternoon with punchy right hand peaks offering excellent scoring potential for the variety of age divisions that surfed,” he said.

Competition kicked off with big scores and more major upsets in the Under 18 Men, Under 16 Women and Under 14 Boys competition heats.

The Under 18 Men provided the most spectacular action of the day with Eden Hasson (Boat Harbour, NSW) landing a full rotation air reverse that judges rewarded with a 9.60 out of a possible 10 points. Also through to the quarter finals after winning their heats: Macklin Flynn (Cowaramup, WA), Oliver Ryssenbeek (Merewether, NSW), Braxon Holmstron (Buddina, QLD), Tim Bain (Sunshine Beach, QLD) and Harley Walters (Angourie, NSW). 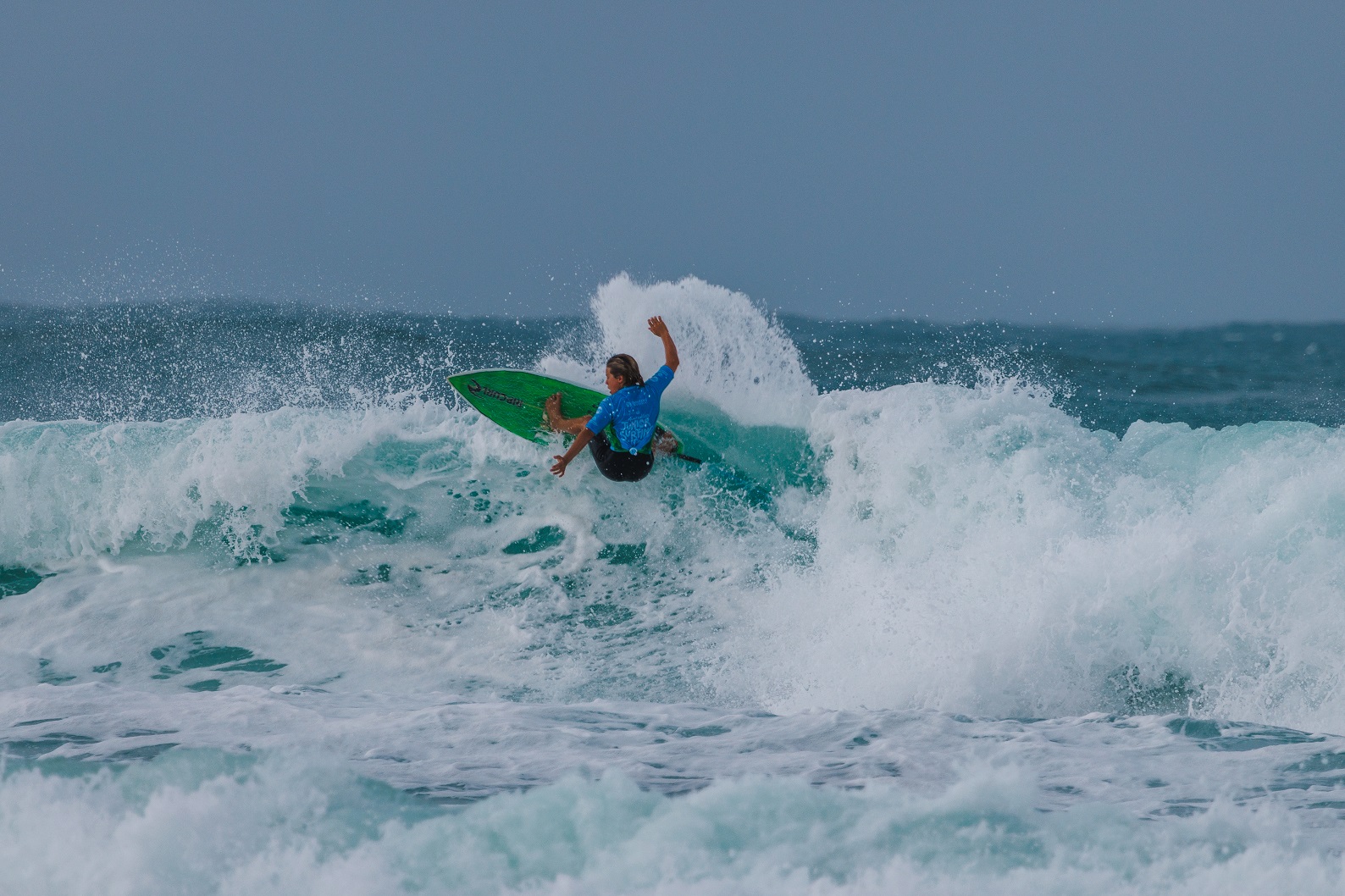 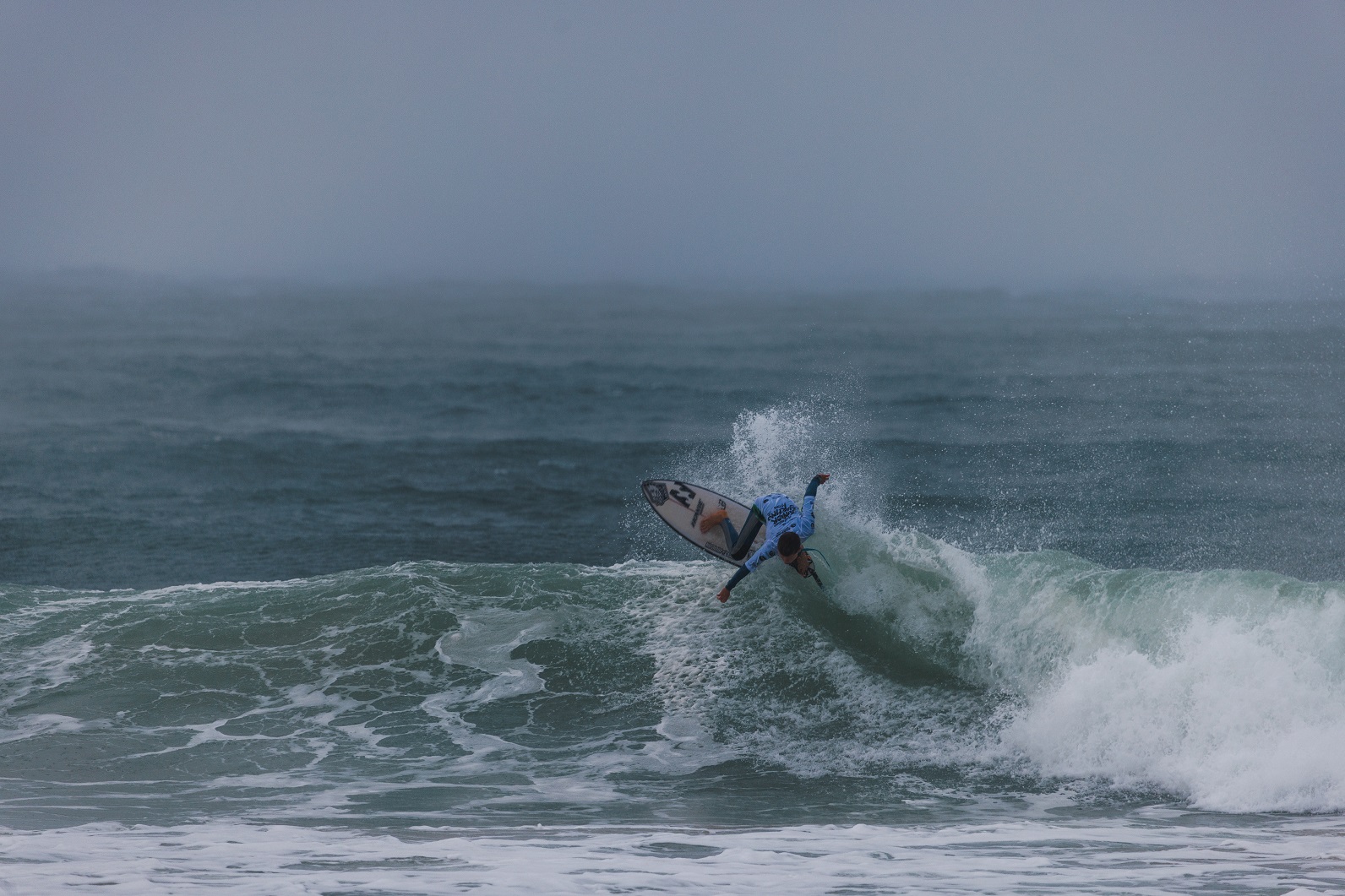 Late in the afternoon the semi finalists were decided.

The rain finally cleared and Cylinders Beach turned it on for Day 6 of the Woolworths Australian Junior Surfing Titles. There were several 9-point rides and semi finalists decided in the U18 Men, U16 Men, U16 Women and U14 Boys divisions. 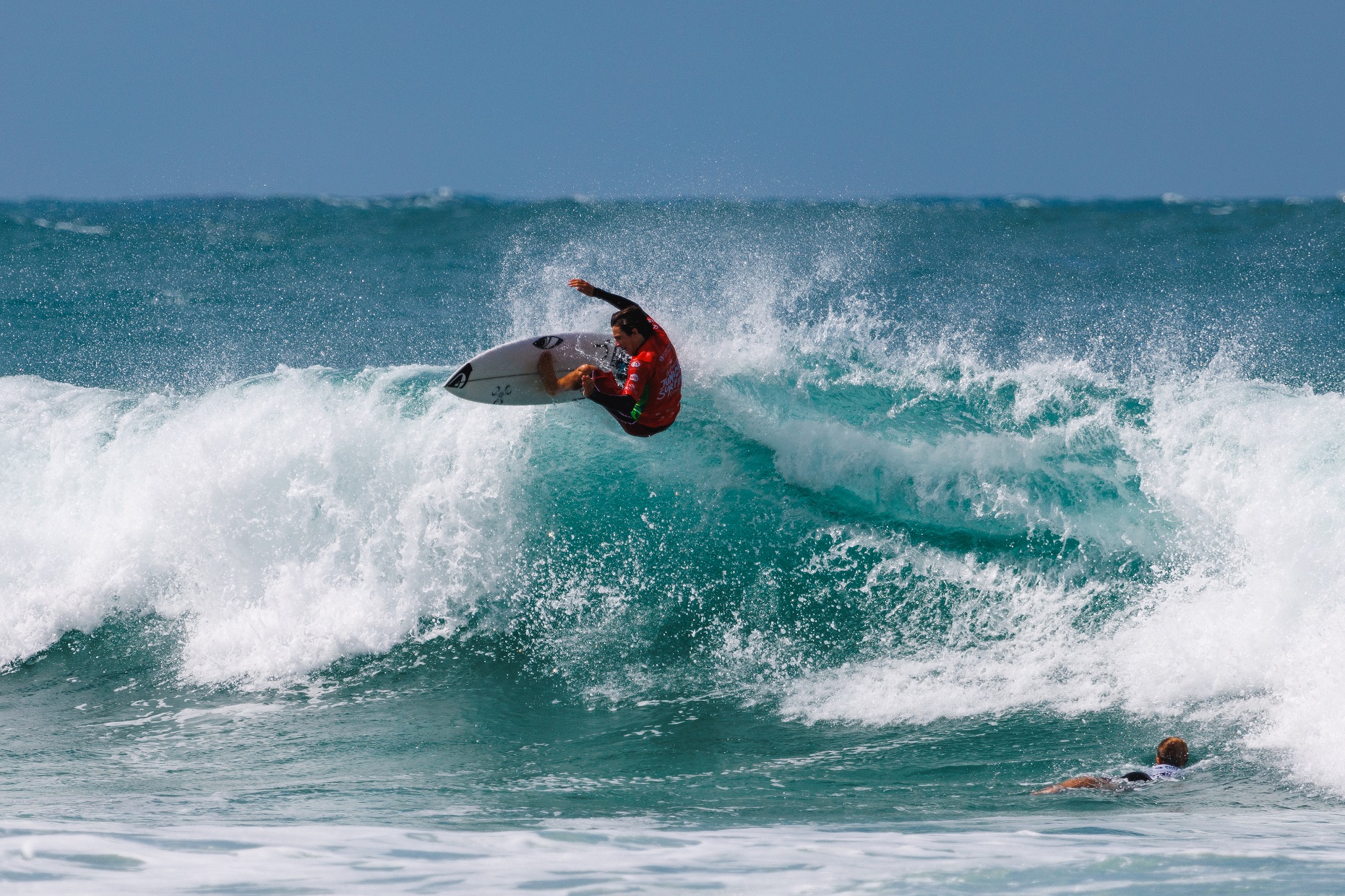 Isla Huppatz (Burleigh Heads, QLD) will be the one to watch in Under 16 Women after posting the highest single wave score today, a 9.50, and combined heat total of 17.75. Also progressing through to the semis were: Milla Brown (Newport, NSW), Ava Holland (Dromana, VIC), Ruby Trew (Narrabeen, NSW), Isi Campbell (Denmark, WA) and Ava Arghyros(Kingscliff, NSW). 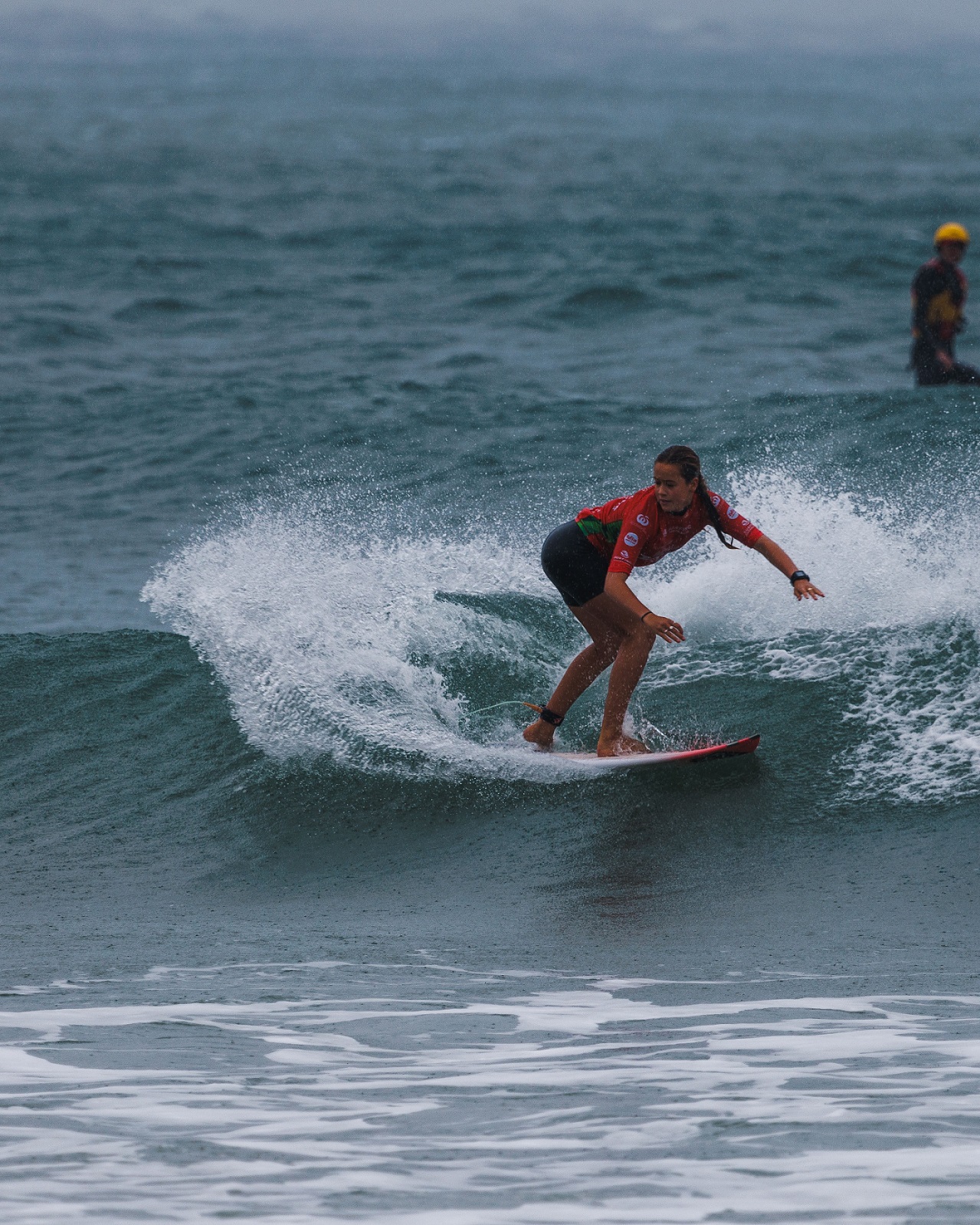 Surfing Australia Contest Director, Glen Elliott said: “We decided to delay the start to let the tide come in. The shore break at Cylinders Beach delivered high performance waves that the groms revelled in. We’ve had multiple 9-point rides today and, for the first time, there was a clean sweep in the Allstars schools team events with Surfing Queensland winning every division. That’s never been done, a fantastic result.”

On Finals day, December 3rd, and day 7 of the event Harley Walters (Angourie, NSW) was on fire from start to finish posting a heat total of 15.75 in Under 18 Men in a close contest against Dane Henry.

“I’m stoked. I didn’t think I’d get there,” Walters said. 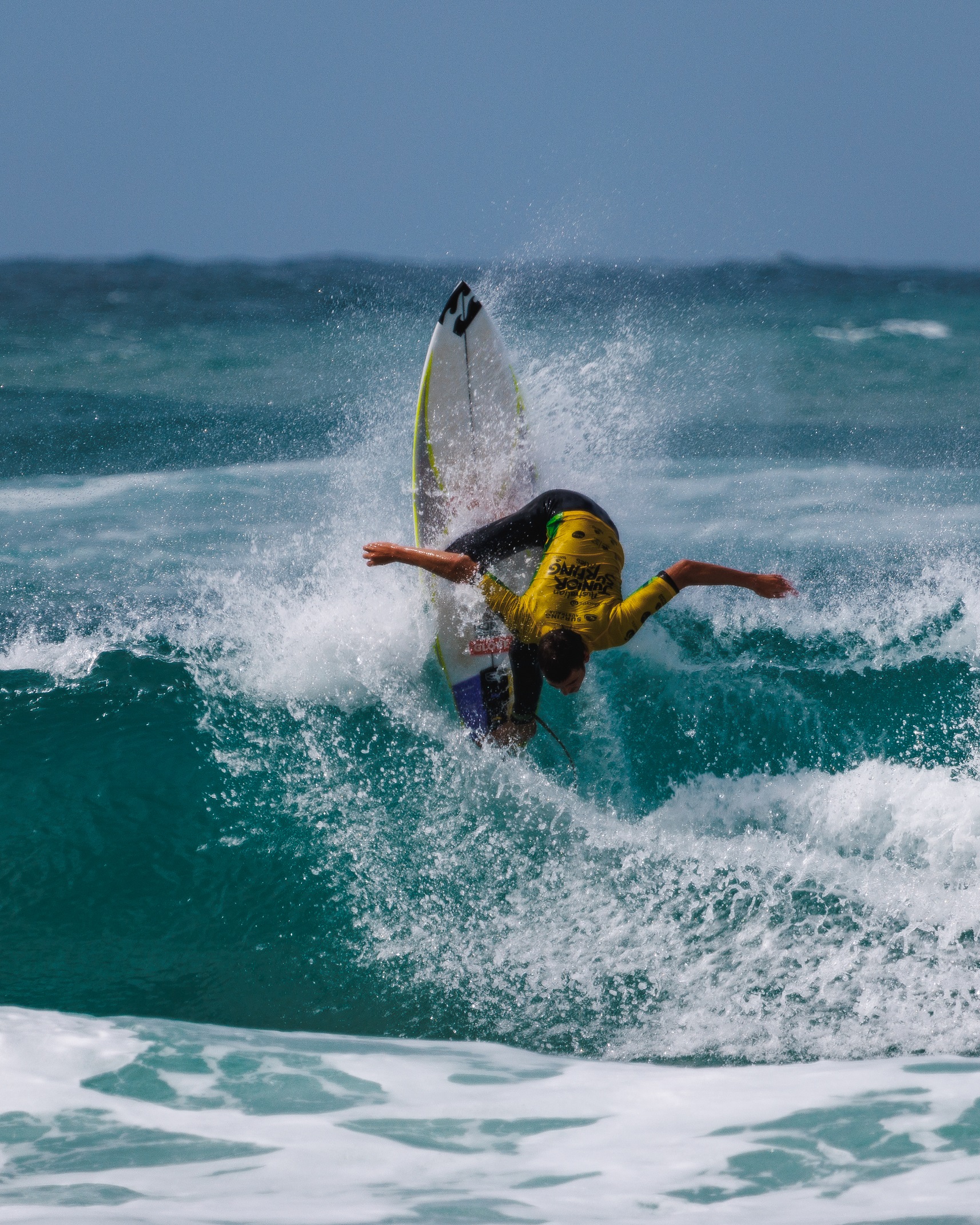 Coco Cairns (Tewantin, QLD) was also lost for words when asked about her win in Under 18 Women and making the National team. 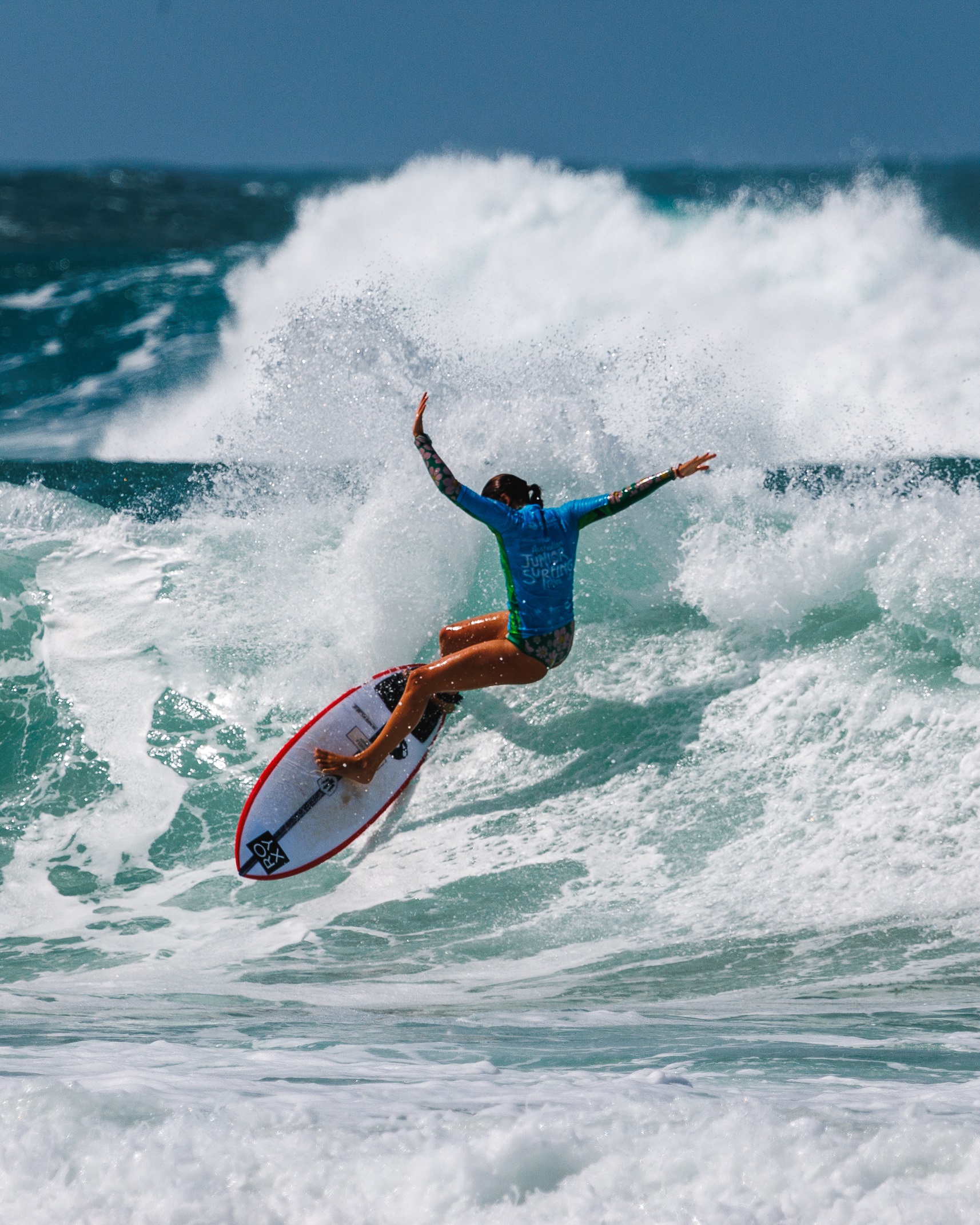 Surfers were on form in the shore break at Cylinders Beach. The Queensland tent erupted when Rico Haybittle (Palm Beach, QLD) launched into an air reverse setting up a good start to his finals campaign to take out Under 16 Men.

“So amazing, I’m frothing, just so psyched,” he said. 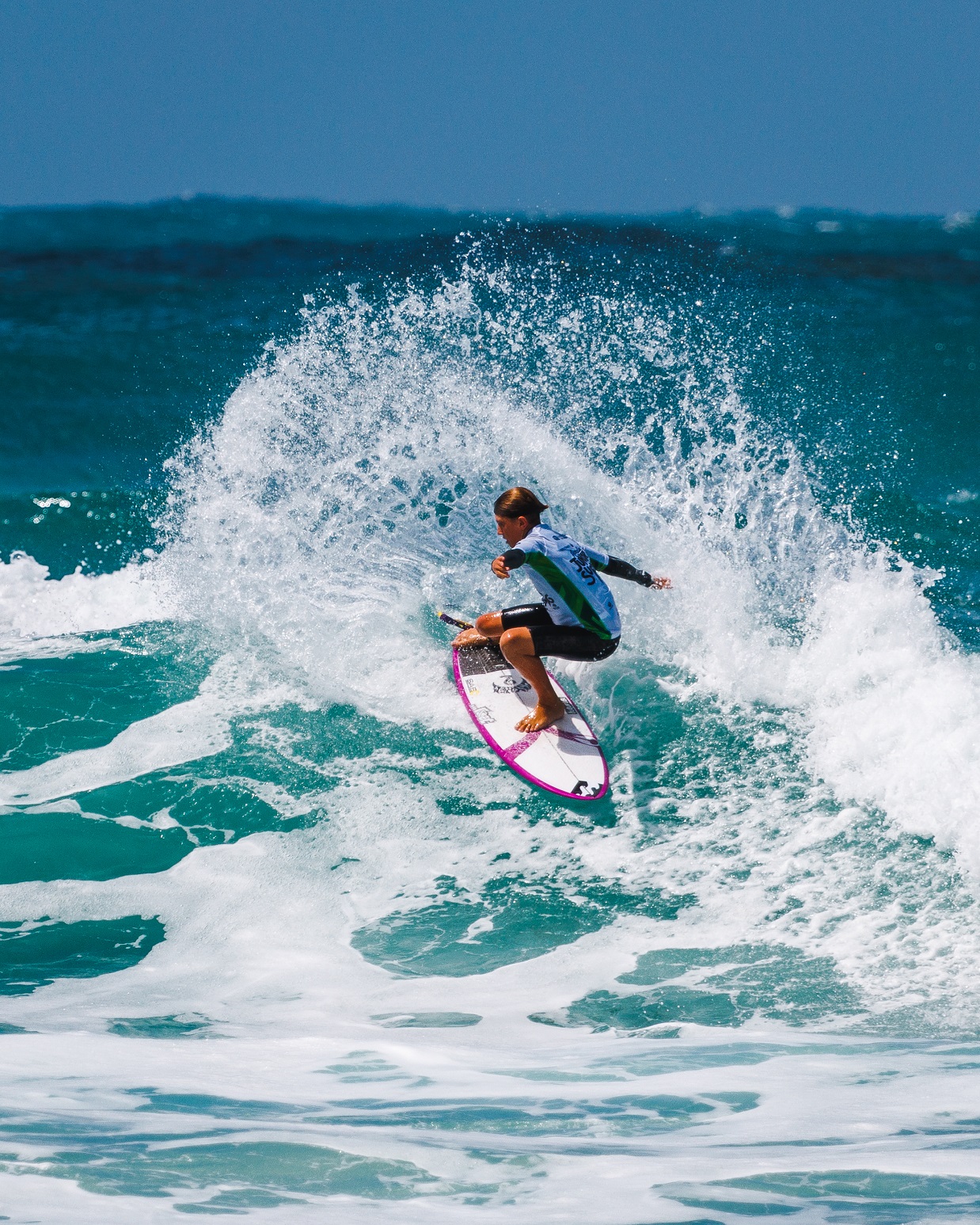 Under 16 Women’s winner, Milla Brown (Newport, NSW) said: “Feels so good. I was looking at the honour roll before and I was thinking it’s my dream to be on this list. And I’ve always wanted to go to the worlds (ISA World Junior Surfing Championships). It has been a dream of mine since I was two.” 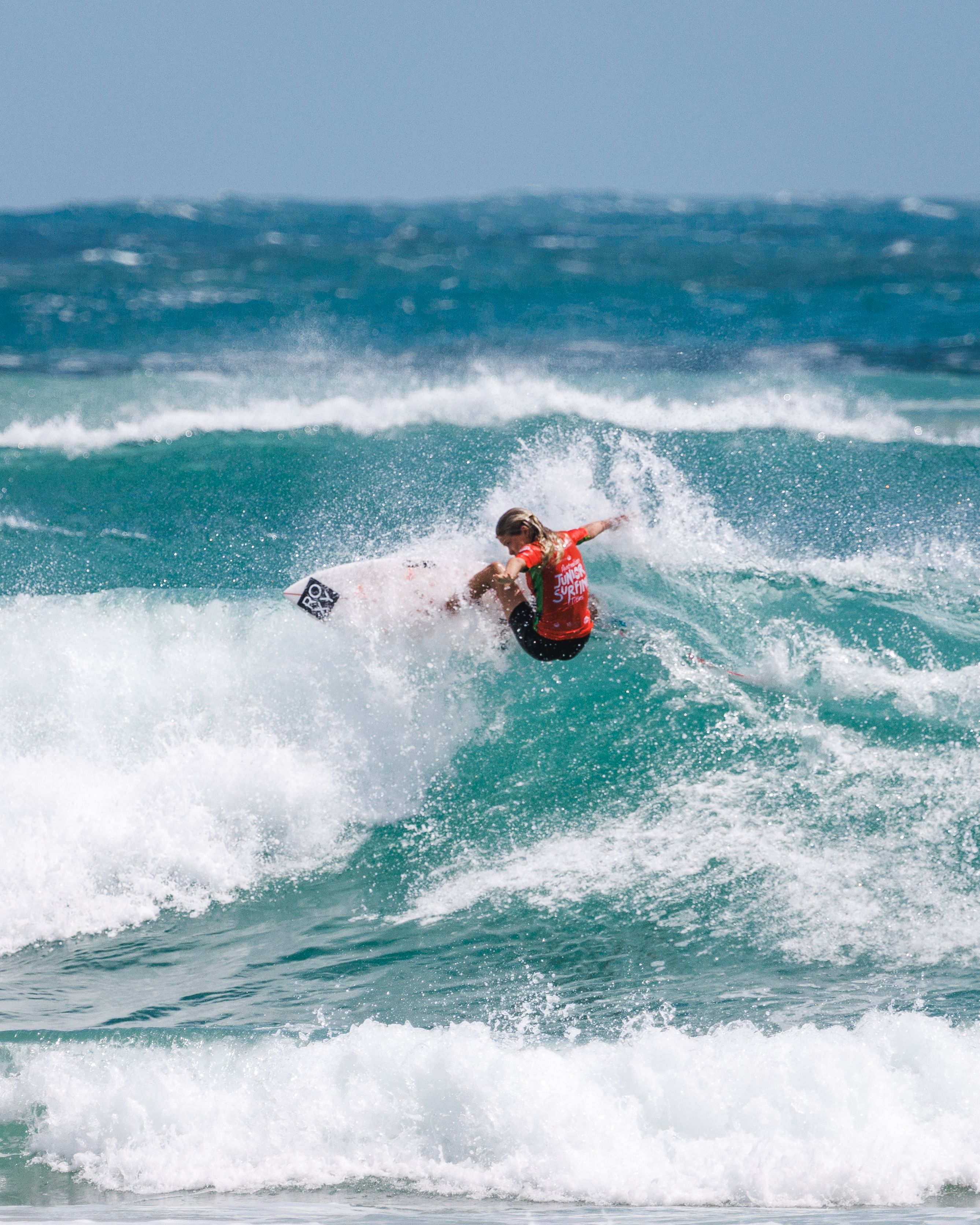 Ocean Lancaster (Merewether, NSW) snared a last minute ride to take out the U14 Boys, netting the highest single wave score of the day (8.60).

“All the boys were dropping big numbers and I thought alright this is my last chance and that first section I knew I had to do something big so I just went for it. I’ve been looking forward to this comp all year, it’s such a big comp and everyone is coming from all around Australia, yeah I’m frothing,” he said.

Eliza Richardson (Sunshine Beach, QLD) was the U14 Girls winner.

“It felt really good because I was nervous and really hard competitors but yeah I’m really stoked to win. Today was really good and really fun,” she said.

Surfing Australia Contest Director, Glen Elliot said: “After a two year break junior surfing is back! This event had everything from challenging conditions through to finishing in highly rippable shore breaks at Cylinder Beach with the grommets revelling in the conditions. The camaraderie and support shown by all the surfers for the full seven days shows that junior surfing in Australia is in a very good place. The winners of the national rankings and the winners of the Australian junior titles mean that the junior Irukandjis will be our strongest team ever.”

Surfing Australia would like to acknowledge the Quandamooka people as the traditional owners of the land on which the competition was held and we pay our respects to elders, past, present and emerging and thank them for the opportunity. 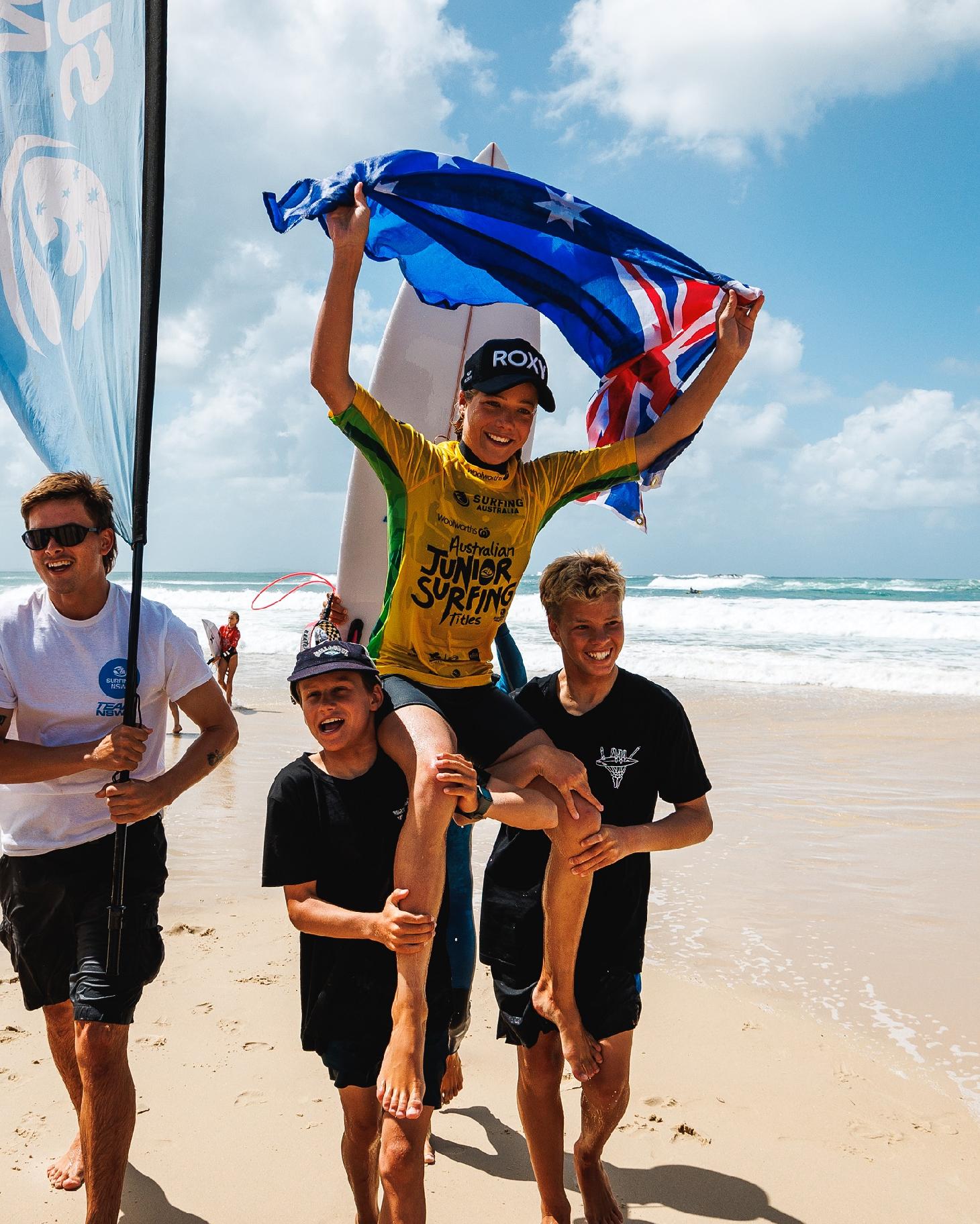