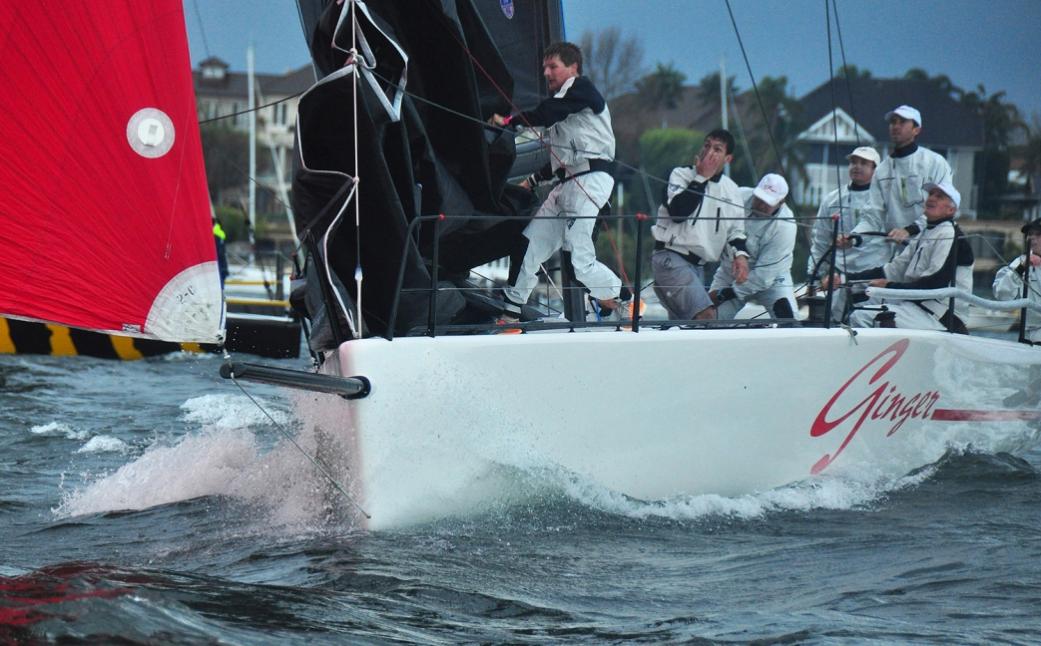 A moody Sydney winter’s day with sou’west breeze gusting close to 30 knots provided the first heavy weather hit out in a long time for the MC38 fleet contesting the second act of their Winter Series.

“Undermanned, under-winched and over-canvassed, and that’s one of the cool things about the boats,” was Allanson’s day two summary. “Everyone has to multitask and you are rewarded for having people who are multidimensional with their skills. There are times when you have one hand on one job and have to pick up another job because things change so quickly.”

The Ginger program has enjoyed consistency for eons and today’s “throw together crew” only helped shaped their final results. New faces included Millie Bennett, who was sailing with Menace until the boat was sold to Chris Way, Scottish sailor Nell Hardie and fly-in guest second bowman, Gosse de Boer.

Second overall by six points was Chris Hancock’s Vino and third was Marcus Blackmore’s Hooligan, steered by Peter Johnson and finishing the shortened pointscore with a points tally of 15.

The class welcomed newcomer Chris Way and Easy Tiger VI for their debut outing in light airs on Saturday June 17, then the opposite conditions on day two. Way and his team had plenty on in the pressured-up rain squalls shooting out of Double Bay but they held their nerve and kept the boat, which sports striking yellow tiger-claw marks on the main and hull, balanced and upright. See video.

“We were taking it a bit easy today, then on the run home to Pittwater I steered down a wave at 21 knots and we had the pumps fully going with the walls of water coming over the boat. They are so wet it’s insane! We got a couple of thirds in the series; it’s the usual story with a new boat….there’s work to do.”

Understanding the physicalness of the grand prix class Way added: “I’ve given my core crew the winter to pick up their fitness.” On the level of racing he added: “It’s very professional racing, everyone knows the rules and the proper etiquette around the marks. The quality of the fleet is excellent; we know everybody and they know us so it’s like being back, but in a new boat.”

Easy Tiger VI took advantage of the gusty weather window to return to Pittwater’s Royal Prince Alfred Yacht Club, or “Tiger-land”, this afternoon, along with Vino. Way says being back at their home club means the crew can work quietly and easily on the boat and get stuck into a training regime before the July 15-16 act three.

Class president John Bacon thought Dark Star’s regatta was over when a jib lock failed during a warmup session on the harbour prior to the first race on Sunday June 18. The crew was heading despondently back to the Royal Sydney Yacht Squadron when John Flannery stepped in with spare parts allowing Dark Star to make it back out for the start of race three, when they posted their best score of second.

“It was good to see Chris out there, he’s been sailing Melges 32s which is great preparation for this class,” Bacon said after racing. “Thanks again to the owners who let their boats keep rolling without them.”

Bacon and his Melbourne Osaka Cup crew David Sampson have arranged to bring the MC38 Lazy Dog back from overseas to be sold to an Australian owner. It’s currently on route to Sydney and will be available tax free and ready to race in time for the summer season. Contact david@towermarine.com.au if interested.

“We want to show that the class is right behind new owners, and build the Sydney fleet,” Bacon said. “We are also talking to our suppliers and getting a good grip on the costs. They are grand prix boats but we want them to be affordable and for new owners to know what they are up for to be competitive.” 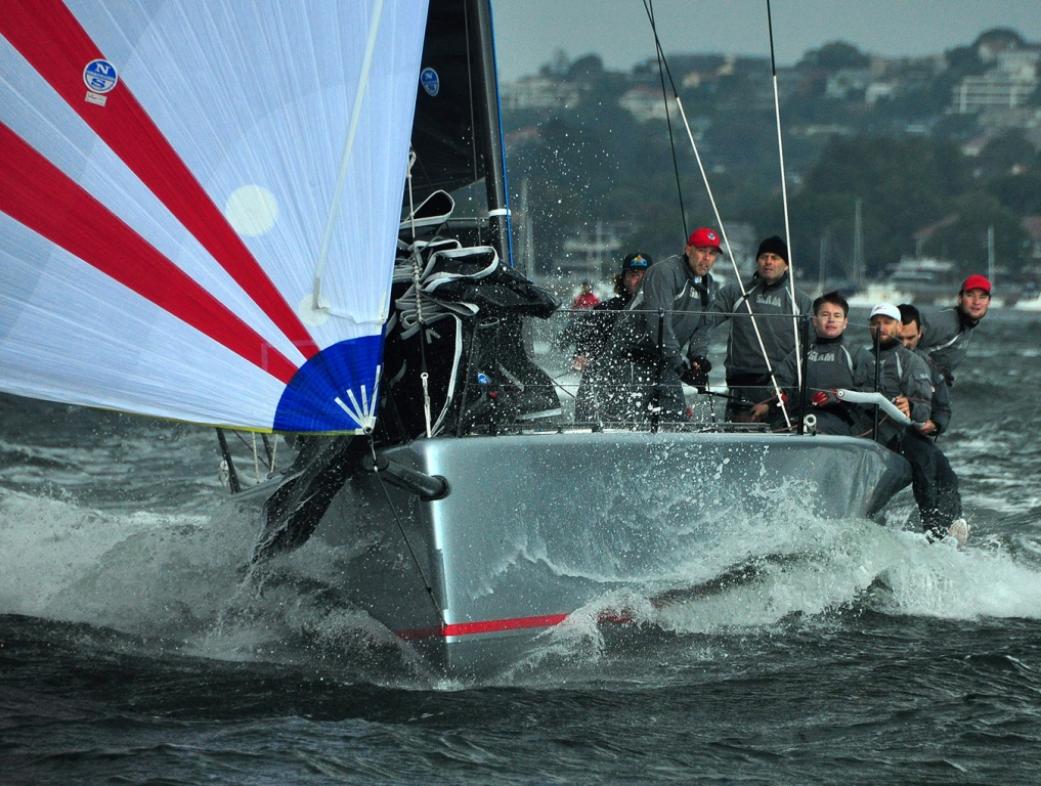 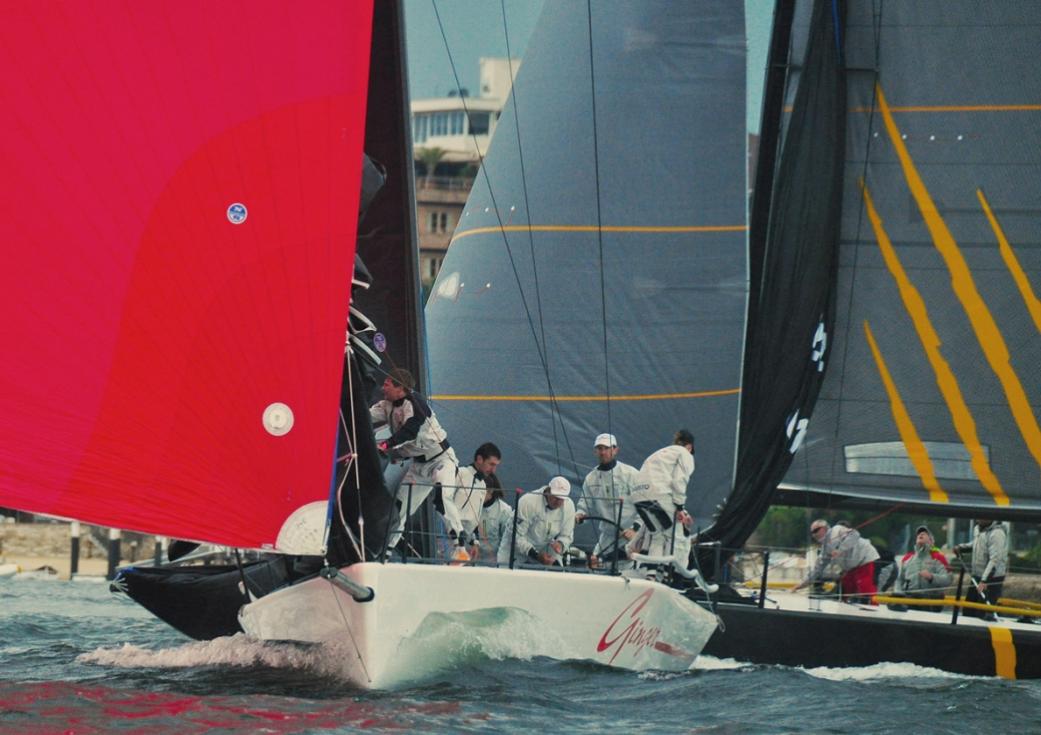