Lennox Head on the state’s Far North Coast made history on Thursday when it became the scene of a dramatic rescue involving the deployment of the Little Ripper UAV and Rescue Pod.

Lifeguards from the Australian Lifeguard Service were preparing for a training session to familiarise themselves with the UAV equipment that is forming a key part of a new partnership between the NSW Department of Primary Industries (DPI) and Surf Life Saving NSW as part of the government’s $16 million shark mitigation strategy when a call came through of two distressed swimmers.

At about 11:30, two men were swimming in powerful surf conditions approximately a kilometre north of the patrolled area when a member of the public noticed that they were having difficulty in the 3 metre swell.

Lifeguard Supervisor Jai Sheridan, the 2017 NSW Lifeguard of the Year, was piloting the UAV at the time, immediately responded and was able to locate the swimmers within minutes of the initial alert.

In a world first real life situation, he dropped the rescue pod to the swimmers, who were able to cling onto it and make their own way to shore where they were met by lifeguards from Lennox Head who had raced to the scene in an ATV.

The pair were fortunately unharmed from their ordeal apart from showing signs of fatigue.

“The Little Ripper UAV certainly proved itself today it is an amazingly efficient piece of lifesaving equipment and a delight to fly,” said Jai Sheridan

“I was able to launch it, fly it to the location, and drop the pod all in about one to two minutes. On a normal day that would have taken our lifeguards a few minutes longer to reach the members of the public,” he said.

Westpac Little Ripper CEO, Mr. Eddie Bennet said this drone technology and payload ability has been 3 intensive years in development to enable this world first in a drone rescue that occurred today.

"The Westpac Little Ripper’s rescue today of the 2 young swimmers, in the 3 metre dangerous swell, clearly illustrates the benefit of this cutting edge technology in such a time critical emergency situation. It works and Australia is leading the world in this technology, said Mr Bennet.

“The investment by Westpac in allowing the development of the Westpac Little Ripper, is the new generation of rescue services,” he said.

The NSW Department of Primary Industry were delighted that the UAV technology has proved itself in a rescue situation in addition to its function as a research tool to assist scientists researching marine activity off Northern NSW.

"We are excited the technology was able to be put into action today and it's a great result following more than 18 months of trials that have explored how drones can be used for shark surveillance," said Department of Primary Industries Director of Fisheries Reasarch, Dr Natalie Moltschaniwskyj

"The NSW Government has provided $430,000 in funding to Surf Life Saving NSW (SLS) for this project this summer.

"Research conducted by DPI indicates drones will be an important tool for shark detection on our beaches, and it's great to see the benefits of our research working at Lennox Head today," Dr Moltschaniwskyj said.

For those of you who have been at Bilgola over the past few months you may have enjoyed seeing the training of the ALS (Australian Lifeguard Service) staff at the southern end of the beach.  Their radio call sign is ‘Bilgola UAV’.  UAV stands for “Unmanned aerial vehicle”.  The Lifeguards undertake a 5 day course to pass their CASA UAV commercial licence.  They then spend 15 hours flying with Little Ripper trainers on the beach to become qualified.
They are continuously training at Bilgola, so pop down, talk to the team and check out the Drone.  Any further information check out the website www.littleripper.com .
The Westpac Little Ripper drone at Bilgola SLSC is thanks to the donation of Marcus and Caroline Blackmore.
Find out more about Bilgola SLSC at: www.bilgolaslsc.org.au
Photo courtesy Bilgola SLSC

Little Ripper Lifesaver is working with SOS Marine, the makers of the SOS DanBuoy, on a portable flotation device that automatically inflates when dropped into the water.

• A self-contained disposable CO2 inflation system that is water activated 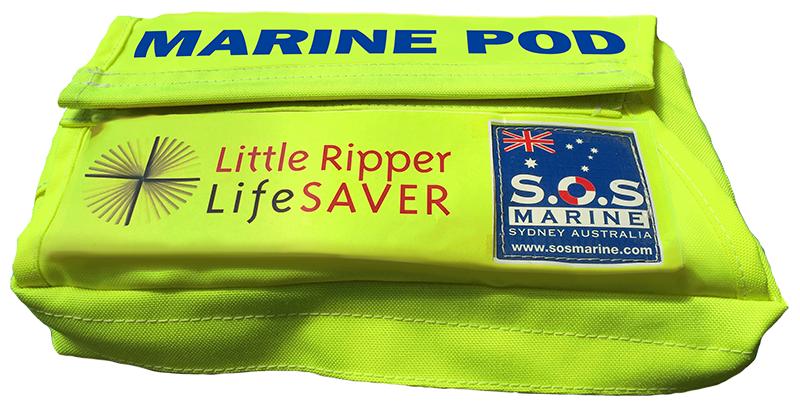 All the pods are specifically designed to meet the payload limitations of the UAVs and the ability to automatically operate.