On The Intimate And Character-Revealing Photographs Of Linda McCartney – Paul’s Wife, And A Stunning Artist 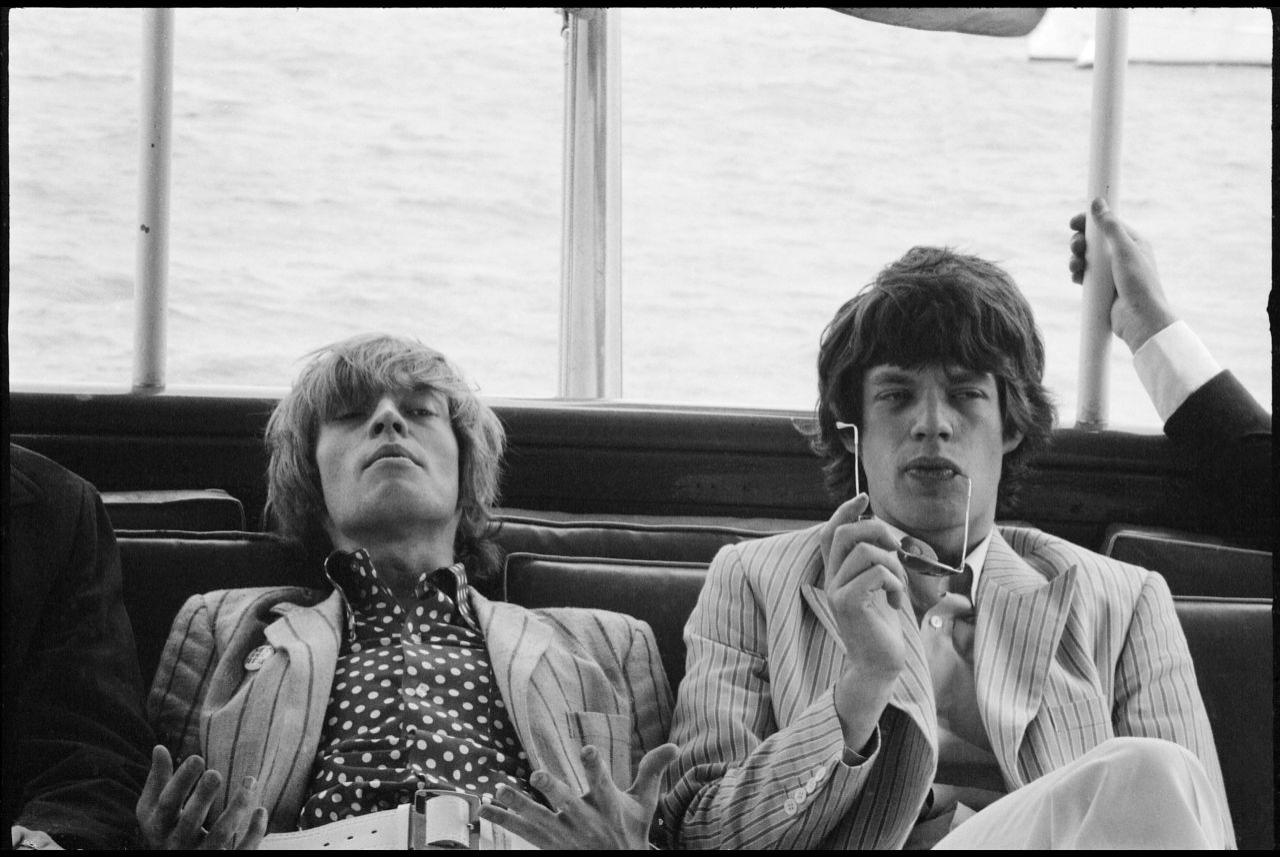 The Linda McCartney Retrospective has toured the world, taking on a new life in each location, morphing and connecting to the local milieu. It morphs again here for Ballarat’s International Foto Biennale. The 200 works included are curated from the artist’s vast archive of half a million photographs by her famous husband Sir Paul McCartney and their daughters, photographer Mary and fashion designer Stella.

The show contains work across 30 years, from her earliest images of rock stars such as the Beatles and Janis Joplin in the 1960s, through to images of the everyday, self-portraits, experiments with form and commentary on causes dear to her heart, especially animal liberation.

Before meeting Paul McCartney in 1967, Linda Eastman (no relation to the Kodak-Eastman family) already enjoyed a successful career. She was named US Female Photographer of the Year in 1967. In 1968, she became the first female photographer to shoot the cover of Rolling Stone with an acclaimed portrait of Eric Clapton. 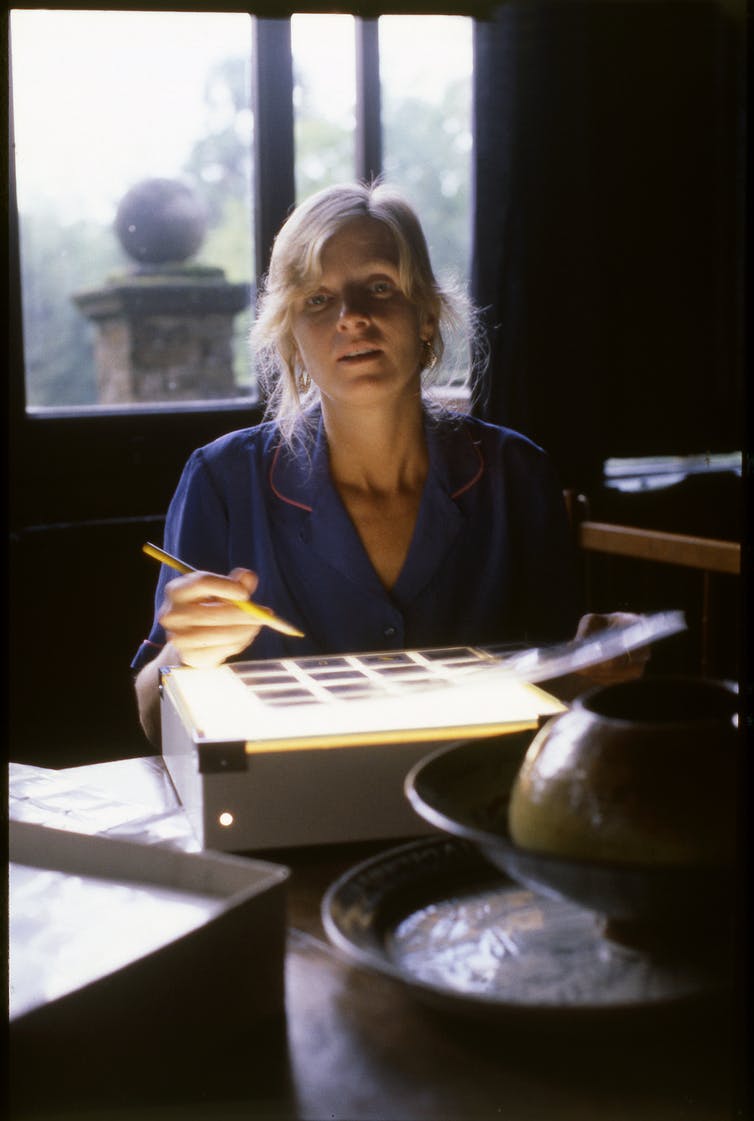 Despite her credentials, she was best known as Paul’s wife rather than an artist in her own right. It is widely reported he often joked that he ruined his wife’s career, but since her death in 1998, Paul has ensured her legacy with books and international retrospectives.

This retrospective includes never before exhibited material, including photographs captured during the McCartney family’s Australian visits for the 1975 Wings and 1993 New World tours.

For local audiences, this provides a connection with images of down-time, press scrums and press conferences (including one with Norman Gunston), landmarks, crew, fans, sunsets and Greenpeace activists. Whether it is the quality of the light or the openness of the faces, these images stand out as quintessentially Australian. 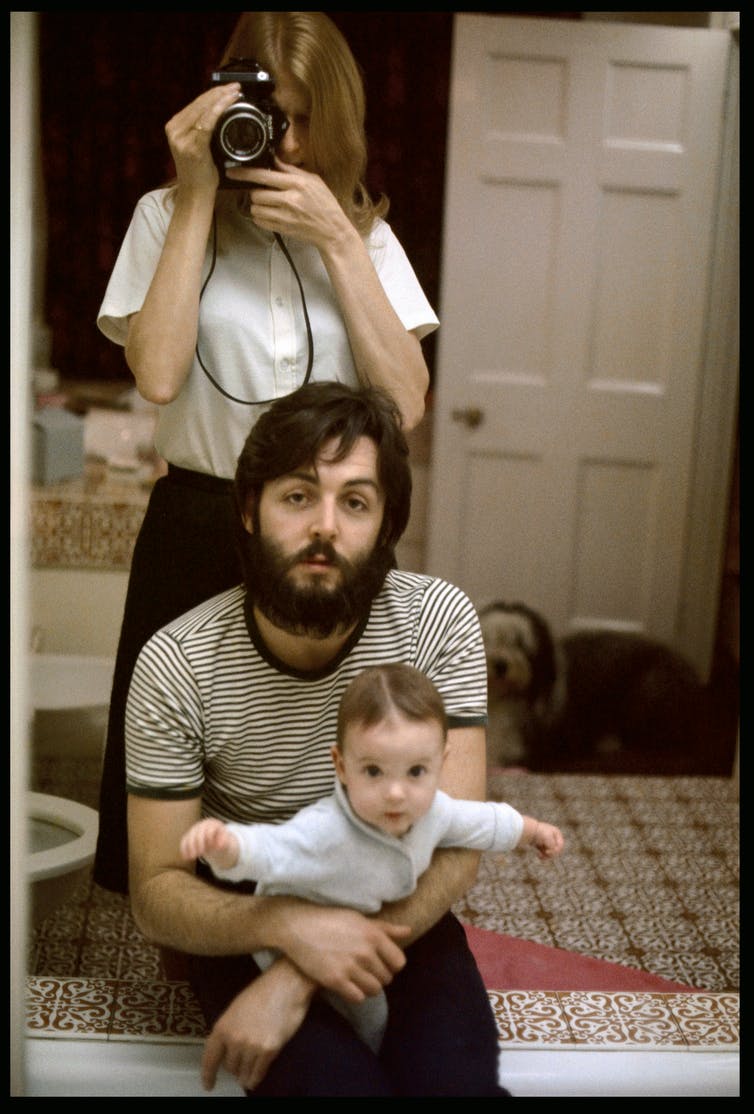 Photo by Linda McCartney, Self Portrait with Paul and Mary, London, 1969. BIFB

McCartney achieves a direct sense of connection and intimacy with her subjects. The images speak of the moment shared, often unposed and character-revealing.

This idea also occurs in her self-portraits – often mirror reflections – reminding the viewer this is her life and her experience. Direct quotes are framing banners: “Looking out from deep below my eyes, I capture moments of my life … .”

In a video she says: “you’ve got to click on the moment, not before and not after”. This sense gives her work a spontaneity and lightness. 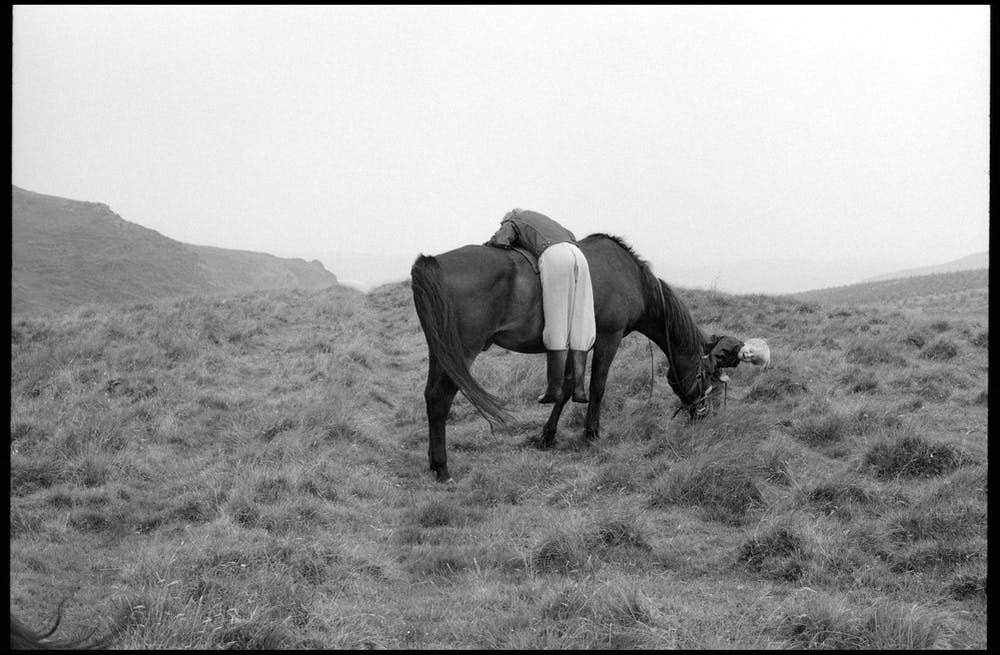 Other images enable fleeting glimpses, such as Mick Jagger 1966. Looking back, framed by a curtain as he moves through a doorway, he just registers her. I wondered if there is something female about this approach, that women might be able to just “be there” so quietly.

Perhaps this could be related to gender relations, where women are imperceivable, non-threatening, only just there in a man’s world. Alternatively, it could show her ability to step into the shadows, to better observe.

There are also portraits of McCartney taken by others. Two taken by Jim Morrison stand out, particularly one very sensual one on a bed taken in 1967. Both photographs reflect a sense that the tables are turned, and it is she who is being looked at. 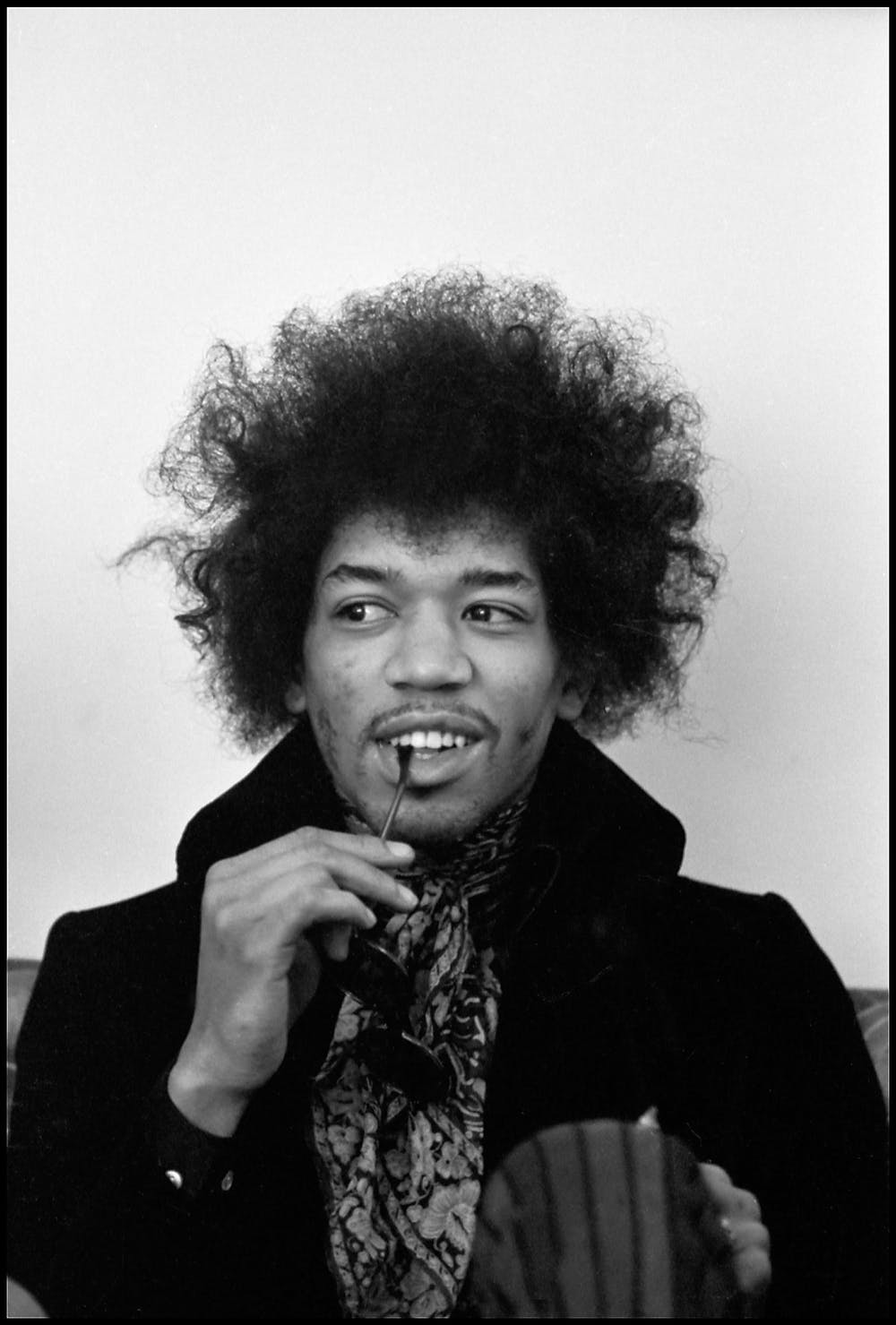 Many of McCartney’s family images depict Paul at play with their children. In the photograph Paul and James Los Angles 1983, father and son are in a bubble bath and Paul hams up the scene of being sucked under the water with an open-mouthed scream, evocative of Edvard Munch.

In another, Paul and Children East Hampton New York 1975, he is depicted with them all trailing behind him like the Pied Piper of Hamelin. In Self Portrait with Paul London 1970, Paul and Linda face the mirror in a bathroom. She holds a camera, slightly angled to him, and he holds an imaginary one.

In all this, you get the sense of his collaboration with her theatrical agenda.

Photographs by the Australian artist Rhonda Senbergs line the laneway to the McCartney show, highlighting the synergy between the women. Senbergs photographed the Australian artworld, her family, Prime Ministers and ordinary people with a similar approach and style to McCarthy. They were both self-taught, and, tragically, they both died of breast cancer in 1998 at 57 years old.

Both photographers share an approach characterised by humour and playfulness bordering on theatricality. This is an example of the important work of a curator, how one show illuminates another, and vice versa.

The Art Gallery of Ballarat is supported by an army of volunteers. This is also the case for the entire Biennale, operating seven days a week over four months. The core program has 12 indoor and 16 outdoor exhibits and there are 120 shows in all with the Open Program straddling the city’s cafes, streetscapes and buildings. 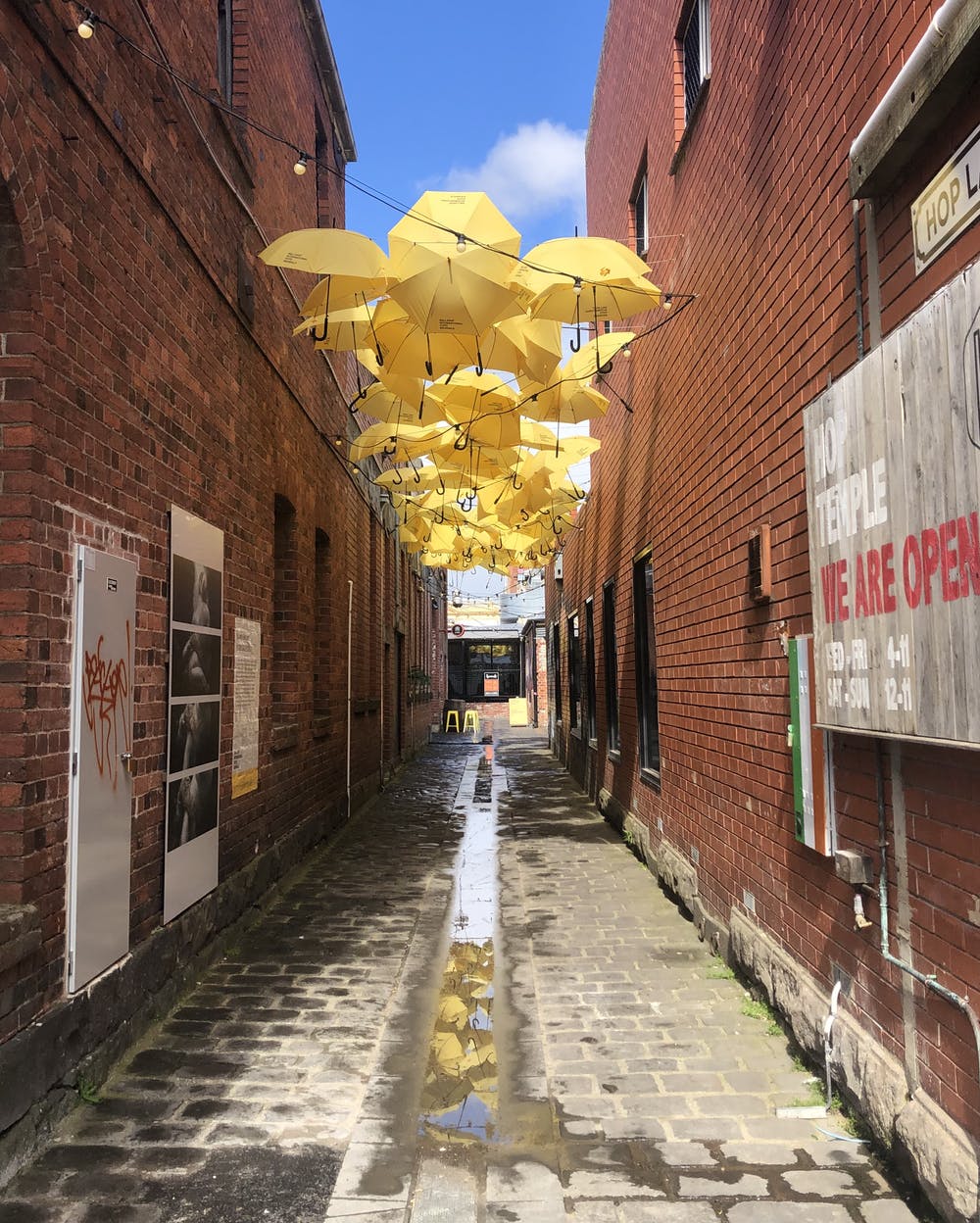 One volunteer, Sarah Masters, tells me she volunteers because of “reciprocity – if you want a vibrant art culture, it is about supporting that where you live”.

I find the volunteers offer interesting snippets of information about the show, or the building, or can identify an obscure object that catches your eye. They are the heroes of this regional arts scene and a key to nurturing and sustaining the cultural heart of this city.

The Linda McCartney Retrospective and The Ballarat International Foto Biennale run until January 9, 2022. Bookings are advised.