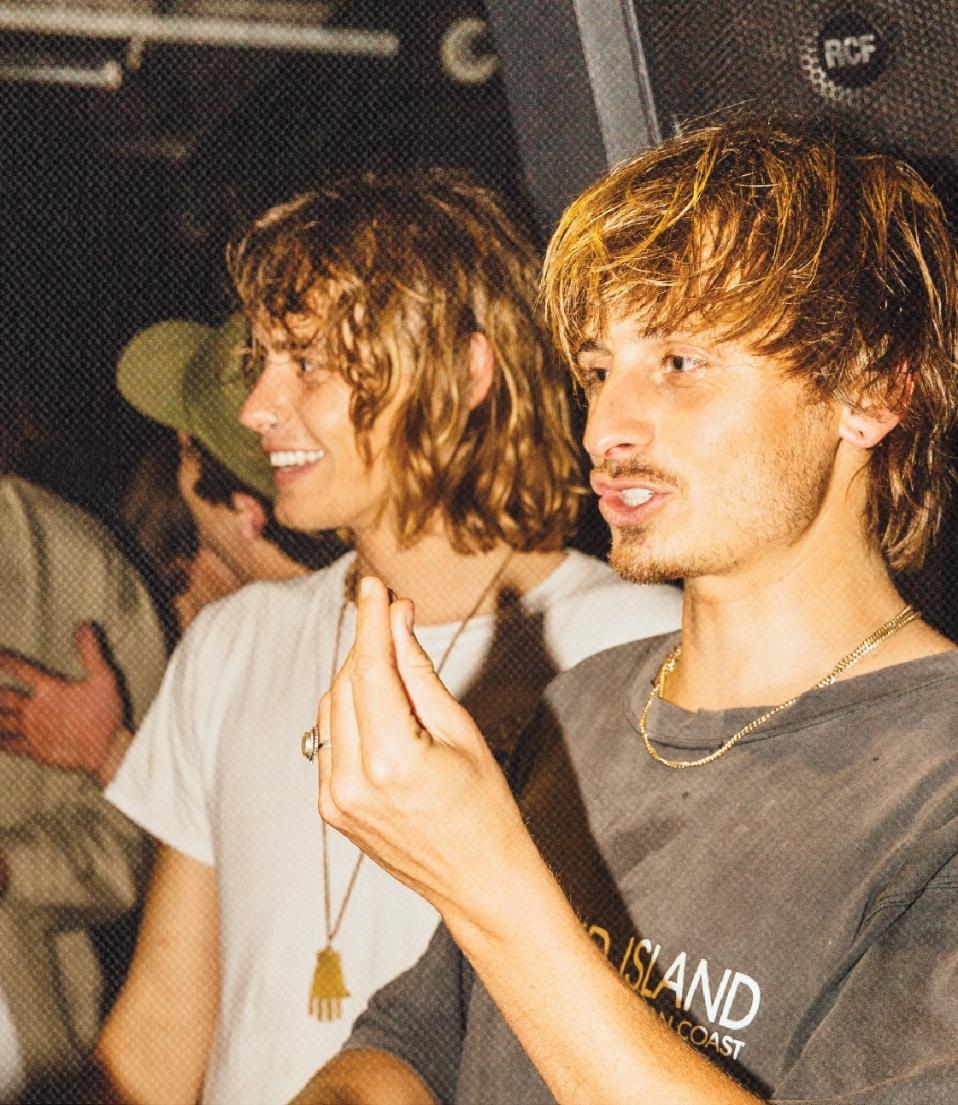 Having grown up seeing The Flowers at The Antler before they became ‘Icehouse’ or Simple Minds down at Bryants at Manly Vale before they became a worldwide success, or attending sneaky little one-off gigs at Mobys by the likes of David Bowie, or wondering if the music WW XXIV (World War Twenty-four) played was actually music, and seeing a host of venues (Dee Why’s ‘Glider Room’, PBRSL, upstairs at the Mona Pub) go the way of the dodo due to noise complaints and the introduction of the RBT, along with the retirement of bands we used to see then – The Oils, INXS, Moving Pictures – too many to list here, and all before they became HUGE, the continued success of Narrabeen RSL’s focus on bringing live music to a local audience and Oliver Leimbach’s slant on this struck a chord.

“Narrabeen RSL is probably the only local pub that’s doing live music at the moment. You have The Newport which has noise restrictions, some great local bars that are also doing some stuff too, as well as Sunday afternoons at Av. Bowlo. The Steyne is probably a bit too hectic for many so it would be great if people would support this local music venue by packing out their shows.” Oli said this week.

Lime Cordiale have an 18+ show at the Nazza on Friday November 9th, a chance for locals to catch up with this homegrown success story and hear some new tunes as well as old favourites.

Lime Cordiale (brothers Oliver and Louis Leimbach) have come home from the USA earlier this year then embarked on The Squeezer Tour up and down the coast, then jumped over to Bali and came back to play at Byron Bay just days later. Now on the Dirt Cheap Tour, once again travelling up and down the coast after opening in New Zealand, they’re working until December 23rd, after which they’ll be part of the Lost Paradise extravaganza over December - New Years up at Glenworth Valley.

When do you catch a breath or get a day off?

Oli: Well, we could have been busier, if anything.

We tend to go away and do that and then come back and do recording. Then, if there’s a month off, it kind of gets really boring. It’s way more fun being away and if we weren’t (touring) we’d probably be travelling anyway.

The output on top of that though – new songs, a new album and mini albums as well as making videos, and you both have some other artistic irons in the creative fire – where does the energy come from – is it all that clean food from you both being Vegan – and just on that, what is your favourite dish?

Oli: Louis’s cooking has just been getting crazy. He makes this intense Vegan Raman and that’s probably my favourite. He’s pretty critical on his own cooking but… that’s great.

In terms of the energy – when you know you have a song coming out you know, right, we’re going to have to do a tour around this song, we’re going to a video and posters and artwork and so you just charge ahead and get it done. Sometimes you do go ‘oh sh*t’ – we do have so much ahead of us in the next few weeks but we definitely just chug along as though it’s a 9 to 5, and get it done.

You also seem to have a fairly stable crew that’s around you too – there’s Jack Shepherd who keeps popping up doing videos and other longer term support crew members…?

Oli: Yes, it has become more solid as we’ve gone on, and that’s not because people have stuck with us. We definitely had a few years there where it was pretty flaky, the members of our band kept changing around. Our drummer is the only other guy apart from Louis and myself who has been with us from the start. We’ve had about four different trombone players and around six different keys players, different guitarists and saxophone players. They come in and out. People decided they want to do things other than be in a band, become a doctor for example.

It’s great having people like Jack though, he’s pretty committed and gets excited like we do when new things come out.

The new just released song ‘Following Fools’ is very smooth, excellent music. Where did that come from?

Oli: Louis and I wrote that together; we tend to write everything together. Sometimes the weight is on one of us more than the other for a little bit but most are collaborations. For ‘Following Fools’ Louis wrote that when we were touring in America – he was in one room and I was in the other. He brought a quarter of the song in to me. I then put in that guitar line. He was singing some gibberish so the next day we decided to do a full session on the song and the lyrics.

I had just read an article about Tim Winton’s then new book The Shepherd’s Hut, where he was talking about masculinity and boys growing up the wrong way and the right way. That was fresh on my mind so we decided to write the lyrics based on what was in that article.

Oli: We have played a previous Under 18’s gig at Dee Why. We got so used to playing in bars that when we went back a few years ago to do a few Under 18’s all ages gigs they sold immediately and everyone was so enthusiastic and hyper we were taken aback, blown away a bit really. We did a few  more and just love doing shows for Under 18’s crowds, they’re just awesome. So I’m really looking forward to doing those two shows.

That said, it’s pretty nerve-wracking playing to your home crowd. You do have those thoughts of ‘are people going to be there that I haven’t seen in 10 years?’ – it’s definitely a bit scarier for some reason.

Why is this tour called the ‘Dirt Cheap Tour’?

Oli: We could have called it the ‘Following Fools’ tour but we have a song coming out very soon called ‘Dirt Cheap’. It’s ready to go and we’re keen to get that out there.

Our ticket prices have always been really low because we want to pack as many people in as possible. At some point we’ll probably jack the price up to 40 bucks but at this stage it’s still dirt cheap.

Oli: (Laughs) That might be pretty hypocritical as we can’t really describe our music. We have so many different influences from so many different places. It’s not like I’d be saying we have this unique sound that no one has ever heard before because we find influences from so many places; from Hip Hop, from Soul, from Reggae – from anything – it might be some Bossanova tune or Rock and Roll. When we find something we like that may work for part of a song we adapt that to work with another part of a song – so each has so many influences.

Don’t you both surf?

So when are we going to hear some surf music - some Bombora type stuff Oli?

Yep – and I’m just stirring you up. There’s a definite smooth wave through much of your music, an influence from being actually in the water.

Your music comes from your mum – she’s a very good musician too isn’t she?

Oli: Yes, there was never any option not to do music. We both went to Newport Public school where mum has taught. I was there until I was about 10, and then went to Bilgola.

Will there be a new album out soon?

Oli: Yes, we are working on a new album. We’re in the studio at the moment and have put out ‘Following Fools’ and possibly others soon. We should have a full album we’ll be performing next year.

Oli: Paradise Beach at Avalon, I’ve spent a lot of time there.

We grew up on Scotland Island and so going back there is absolutely crazy.

Tickets for the Narrabeen show are available at the venue and at: http://www.limecordiale.com

Get in quick, this, like other shows on the Dirt Cheap Tour, are getting full pretty quickly. A few extra shows have been added at some venues.

Below runs Following Fools’ as a taster – NB: - Rated PG: Language Warning (for one word x 2)! 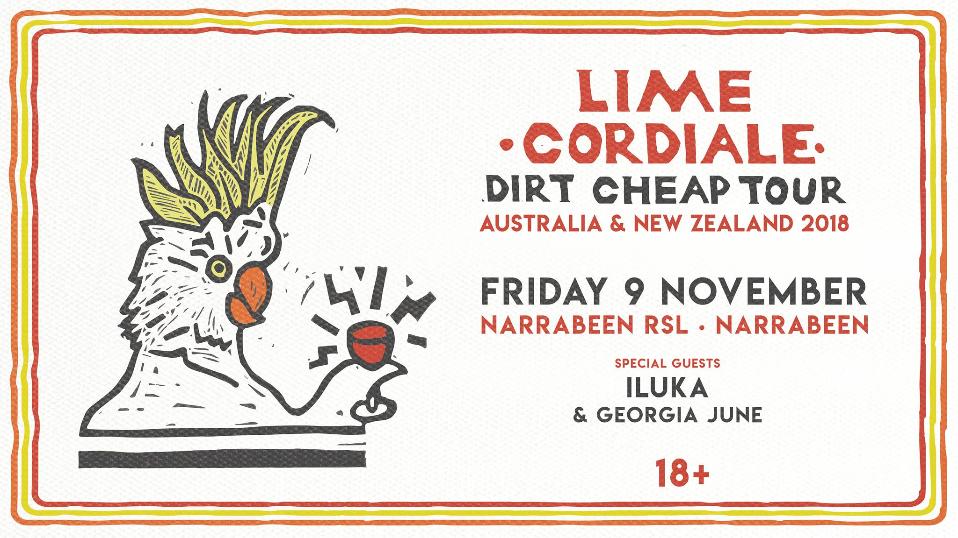