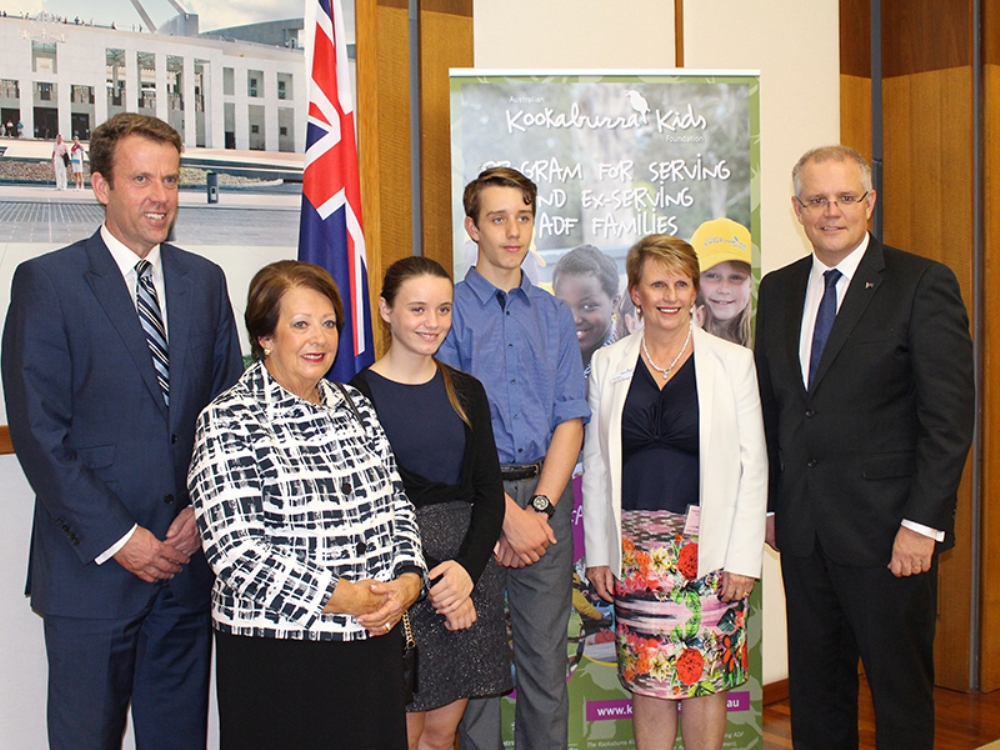 The Hon. Dan Tehan MP, Minister for Veteran’s Affairs, Her Excellency Lady Cosgrove, Kookaburra Kids Ambassador, Kookaburra Kids CEO, Pam Brown and The Hon. Scott Morrison MP, Treasurer, at the launch.
The launch was attended by Her Excellency Lady Cosgrove, Kookaburra Kids Ambassador, The Hon. Scott Morrison MP, Treasurer, Kookaburra Kids Parliamentary Patron, The Hon. Dan Tehan MP, Minister for Veteran’s Affairs, Air Vice-Marshal Tracy Smart AM, Commander Joint Health and representatives from Department of Veterans’ Affairs, Partners of Veterans Association, Defence Families of Australia, Defence Community Organisation and Veterans and Veterans Families Counselling Services. Ministers and Senators also attended the launch, including MP for Mackellar, Mr. Jason Falinski.
On March 22nd Jason Falinski, MP for Mackellar joined colleagues Treasurer Scott Morrison and Minister for Veterans' Affairs Dan Tehan at the launch of the Kookaburra Kids program for Defence Force families, both current and returned. Mr. Falinski states this is a great initiative he will continue to strongly support and wants those in our community who may benefit to be aware of what is now available.
Sutherland based Kookaburra Kids has been operating for over 15 years. It provides much-needed support for young people living in families affected by mental illness. From humble beginnings, the program has grown to over 1,100 kids—one of the largest of its kind in Australia.
"For those in our community who have served our nation, the impacts can be felt every single day. While today, thankfully, there is greater awareness of mental illness in the Defence forces, the impact at home on the kids had been overlooked. I am proud that the Turnbull government, with full bipartisan support, has committed $2.1 million over two years to work with the Kookaburra Kids Foundation to develop a pilot program specifically tailored to the needs of our veterans' families. Kids will be able to build supportive peer networks, learn where to turn for help and have fun with others in similar situations, so they know they are not alone." Mr Falinski stated in a speech delivered in Parliament.
"In my electorate, so much great work has been done in the mental health space for both current serving men and women and veterans. As a community, we ask much of our Defence Force personnel. It is vital that we provide support for their families in return."
The Hon Scott Morrison MP, Treasurer of the Commonwealth of Australia, and The Hon Dan Tehan MP, Minister for Veterans' Affairs, released this statement at the launch:

Minister for Veterans’ Affairs the Hon. Dan Tehan and Treasurer the Hon. Scott Morrison today officially launched the Turnbull Government’s $2.1 million pilot support program for children of veterans with mental health issues, run by the Australian Kookaburra Kids Foundation.
The government funded program will give children of veterans with mental health issues assistance to build their coping skills and resilience.
The program will include recreational and educational camps for children aged eight to 18 who have a veteran parent with a mental health condition.
Mr Tehan said families played a critical role supporting current and former Australian Defence Force (ADF) members.
“When someone signs up to serve and defend our nation their entire family is also asked to make sacrifices,” Mr Tehan said.
“This program recognises that mental health issues affect entire families and the Government will support them.”
Mr Morrison said the program would allow children to bond with peers who were facing similar challenges.
“Kookaburra Kids is a fantastic charity founded in my electorate of Cook which has been successfully supporting children living in families affected by mental illness for well over a decade,” Mr Morrison said.
“The Foundation will use its current model to deliver activities specifically tailored to the unique needs of veterans’ children. The first programs are scheduled to start mid-2017 in New South Wales and ACT.”
Mr Tehan said the Kookaburra Kids program would build on other important work the Government was doing to support the broader veteran community.
“The Government provides free mental health treatment to anyone who has ever served at least one day in the full-time ADF for post-traumatic stress disorder, depression, anxiety, and alcohol and substance abuse,” Mr Tehan said.
“The 2016–17 MYEFO also provided $3.1 million to further extend access to the Veterans and Veterans Families Counselling Service.”
For anyone looking to get involved with Kookaburra Kids, or if you would like to refer a child, please visit the Kookaburra Kids website.
_____________________________
The Government is providing $2.1 million over two years to the Australian Kookaburra Kids Foundation to develop and evaluate the pilot program which will provide respite camps, activity days and age-appropriate mental health education focusing on coping skills and resilience, while allowing children to bond with peers who are facing similar challenges.
Kookaburra Kids CEO, Pam Brown said “We know from our vast experience the positive impact and the difference our program makes to the lives of children who have a parent with mental illness, we will deliver a program to ADF families that will support them through the complex mental health journey and give the children hope for their future.”
“We are proud the Government has recognised the success of the Kookaburra Kids program and endorsed our ability to deliver a program to children from service and ex serving ADF families who have been affected by mental illness as a result of military service.”
The launch was attended by Her Excellency Lady Cosgrove, Kookaburra Kids Ambassador, The Hon. Scott Morrison MP, Treasurer, Kookaburra Kids Parliamentary Patron, The Hon. Dan Tehan MP, Minister for Veteran’s Affairs, Air Vice-Marshal Tracy Smart AM, Commander Joint Health and representatives from Department of Veterans’ Affairs, Partners of Veterans Association, Defence Families of Australia, Defence Community Organisation and Veterans and Veterans Families Counselling Services. Ministers and Senators also attended the launch.
Robyn Ritchie, National Convenor, Defence Families of Australia (DFA) said “In recent years, DFA has highlighted to the then Assistant Minister for Defence, in partnership with Partners of Veterans Association, the amazing work done by Kookaburra Kids Foundation and the need for enhanced funding and support to provide program placements for children of current and ex serving ADF personnel. DFA believe this program will be highly valuable to ADF families. We are delighted to see the launch of a program that supports all children living in a family affected by mental illness from a military background and look forward to its ongoing success.”
Registrations for the program are now open to children, aged 8 – 18 years, who have a parent with a mental illness as a result of their military service. The program is free for eligible children to attend.
The program will commence in 2017, starting in May for NSW and July for ACT. All other States will be rolled out over the next two years.
Thanks go to the Australian Government Department of Veterans' Affairs, The Hon. Scott Morrison MP, Treasurer and Her Excellency Lady Cosgrove for their ongoing support.
To find out more about the program or to register a child go to https://kookaburrakids.org.au/refer-a-child/online-referral/ or call head office on (02) 9525 7474 during business hours (AEST).