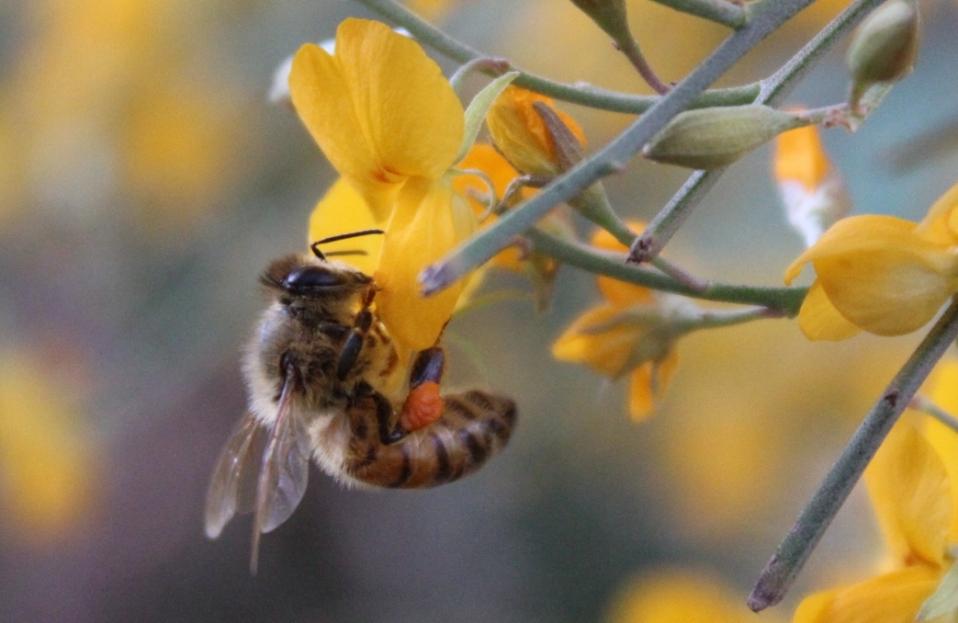 Honey collection is an ancient activity. Humans apparently began hunting for honey at least 8,000 years ago, as evidenced by a cave painting in Valencia, Spain. The painting is a Mesolithic rock painting, showing two honey hunters collecting honey and honeycomb from a wild bee nest. The figures are depicted carrying baskets or gourds, and using a ladder or series of ropes to reach the wild nest. 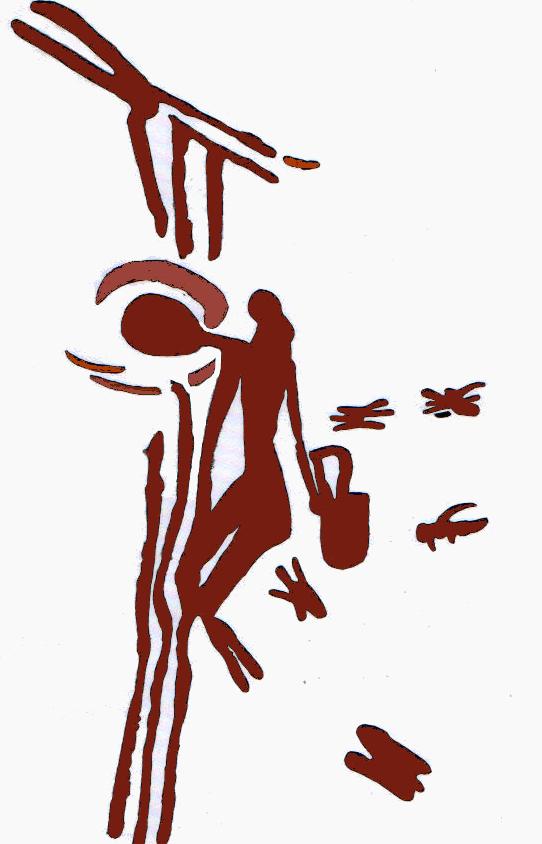 Honey seeker depicted in an 8000-year-old cave painting at Araña Caves in Spain
The greater honeyguide bird guides humans to wild bee hives and this behavior may have evolved with early hominids.
The oldest known honey remains were found in the country of Georgia. Archaeologists found honey remains on the inner surface of clay vessels unearthed in an ancient tomb, dating back some 4,700–5,500 years. In ancient Georgia, several types of honey were buried with a person for their journey into the afterlife, including linden, berry, and meadow-flower varieties.
In ancient Egypt, honey was used to sweeten cakes and biscuits, and was used in many other dishes. Ancient Egyptian and Middle Eastern peoples also used honey for embalming the dead. The fertility god of Egypt, Min, was offered honey.
In ancient Greece, honey was produced from the Archaic to the Hellenistic periods. In 594 BC, beekeeping around Athens was so widespread that Solon passed a law about it: "He who sets up hives of bees must put them 300 feet (91 metres) away from those already installed by another". Greek archaeological excavations of pottery located ancient hives. According to Columella, Greek beekeepers of the Hellenistic period did not hesitate to move their hives over rather long distances to maximise production, taking advantage of the different vegetative cycles in different regions.
In the absence of sugar, honey was an integral sweetening ingredient in Greek and Roman cuisine. During Roman times, honey was part of many recipes and it is mentioned in the work of many authors, such as Virgil, Pliny, Cicero, and others.
The spiritual and therapeutic use of honey in ancient India is documented in both the Vedas and the Ayurveda texts, which were both composed at least 4,000 years ago.
Beekeeping in ancient China has existed since ancient times and appears to be untraceable to its origin. In the book Golden Rules of Business Success written by Fan Li (or Tao Zhu Gong) during the Spring and Autumn period, some parts mention the art of beekeeping and the importance of the quality of the wooden box for beekeeping that can affect the quality of its honey.
Honey was also cultivated in ancient Mesoamerica. The Maya used honey from the stingless bee for culinary purposes, and continue to do so today. The Maya also regard the bee as sacred (see Mayan stingless bees of Central America).
Some cultures believed honey had many practical health uses. It was used as an ointment for rashes and burns, and to help soothe sore throats when no other practices were available.
Folk medicine and wound research
In myths and folk medicine, honey has been used both orally and topically to treat various ailments including gastric disturbances, ulcers, skin wounds, and skin burns by ancient Greeks and Egyptians, and in Ayurveda and traditional Chinese medicine.
Proposed for treating wounds and burns, honey may have antimicrobial properties as first reported in 1892 and be useful as a safe, improvisational wound treatment. Though its supposed antimicrobial properties may be due to high osmolarity even when diluted with water, it is more effective than plain sugar water of a similar viscosity. Definitive clinical conclusions about the efficacy and safety of treating wounds, however, are not possible from this limited research.
The flora that bees use to make the honey may have a role in its properties, particularly by bees foraging from the manuka myrtle,Leptospermum scoparium, as proposed in one study. 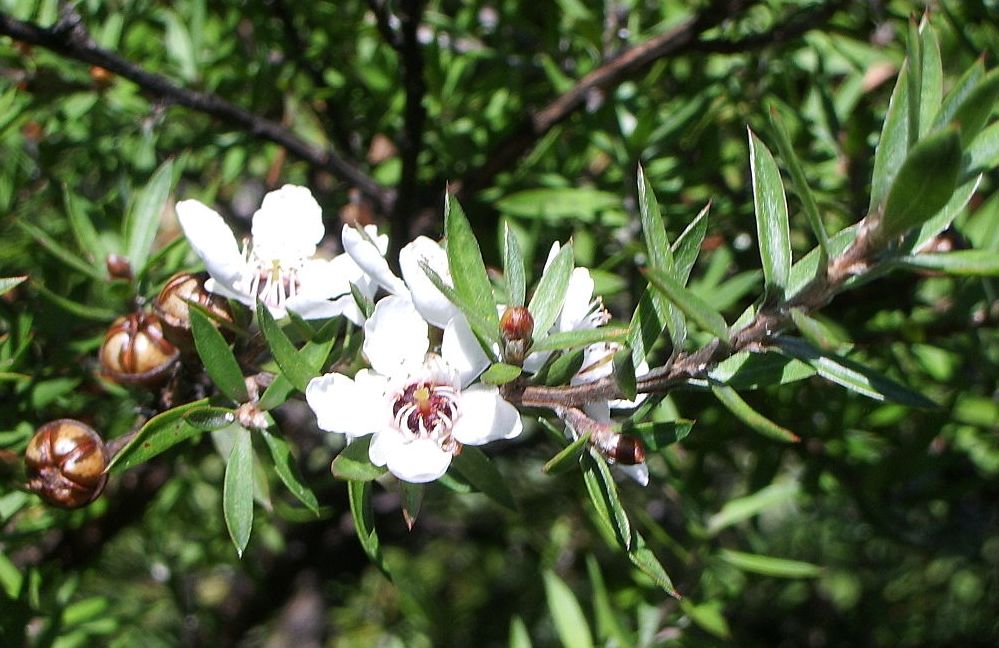 Manuka (Leptospermum scoparium) flowers; species of flowering plant in the myrtle family Myrtaceae, that is native to Australia and New Zealand. Also visit ABC's February 2018: Jarrah and marri honey: A liquid goldrush of medical benefits
Religious significance
Ancient Greeks Religion In ancient Greek religion, the food of Zeus and the 12 Gods of Olympus was honey in the form of nectar and ambrosia.
Hinduism In Hinduism, honey (Madhu) is one of the five elixirs of immortality (Panchamrita). In temples, honey is poured over the deities in a ritual called Madhu abhisheka. The Vedas and other ancient literature mention the use of honey as a great medicinal and health food.
Judaism In Jewish tradition, honey is a symbol for the new year, Rosh Hashanah. At the traditional meal for that holiday, apple slices are dipped in honey and eaten to bring a sweet new year. Some Rosh Hashanah greetings show honey and an apple, symbolizing the feast. In some congregations, small straws of honey are given out to usher in the new year.
The Hebrew Bible contains many references to honey. In the Book of Judges, Samson found a swarm of bees and honey in the carcass of a lion (14:8). In Old Testament law, offerings were made in the temple to God. The Book of Leviticus says that "Every grain offering you bring to the Lord must be made without yeast, for you are not to burn any yeast or honey in a food offering presented to the Lord" (2:11). In the Books of Samuel, Jonathan is forced into a confrontation with his father King Saul after eating honey in violation of a rash oath Saul has made. Proverbs 16:24 in the JPS Tanakh 1917 version says "Pleasant words are as a honeycomb, Sweet to the soul, and health to the bones." Book of Exodus famously describes the Promised Land as a "land flowing with milk and honey" (33:3). However, most Biblical commentators write that the original Hebrew in the Bible (דבש devash) refers to the sweet syrup produced from the juice of dates (silan). In 2005 an apiary dating from the 10th century B.C. was found in Tel Rehov, Israel that contained 100 hives and is estimated to produce half a ton of honey annually. Pure honey is considered kosher, though it is produced by a flying insect, a non-kosher creature; other products of non-kosher animals are not kosher.
Buddhism In Buddhism, honey plays an important role in the festival of Madhu Purnima, celebrated in India and Bangladesh. The day commemorates Buddha's making peace among his disciples by retreating into the wilderness. The legend has it that while he was there, a monkey brought him honey to eat. On Madhu Purnima, Buddhists remember this act by giving honey to monks. The monkey's gift is frequently depicted in Buddhist art.
Christianity In the Christian New Testament, Matthew 3:4, John the Baptist is said to have lived for a long period of time in the wilderness on a diet consisting of locusts and wild honey.
Islam In Islam, an entire chapter (Surah) in the Qur'an is called an-Nahl (the Bees). According to his teachings (hadith), Muhammad strongly recommended honey for healing purposes. The Qur'an promotes honey as a nutritious and healthy food. Below is the English translation of those specific verses:
And thy Lord taught the Bee to build its cells in hills, on trees, and in (men's) habitations; Then to eat of all the produce (of the earth), and find with skill the spacious paths of its Lord: there issues from within their bodies a drink of varying colours, wherein is healing for men: verily in this is a Sign for those who give thought [Al-Quran 16:68–69].