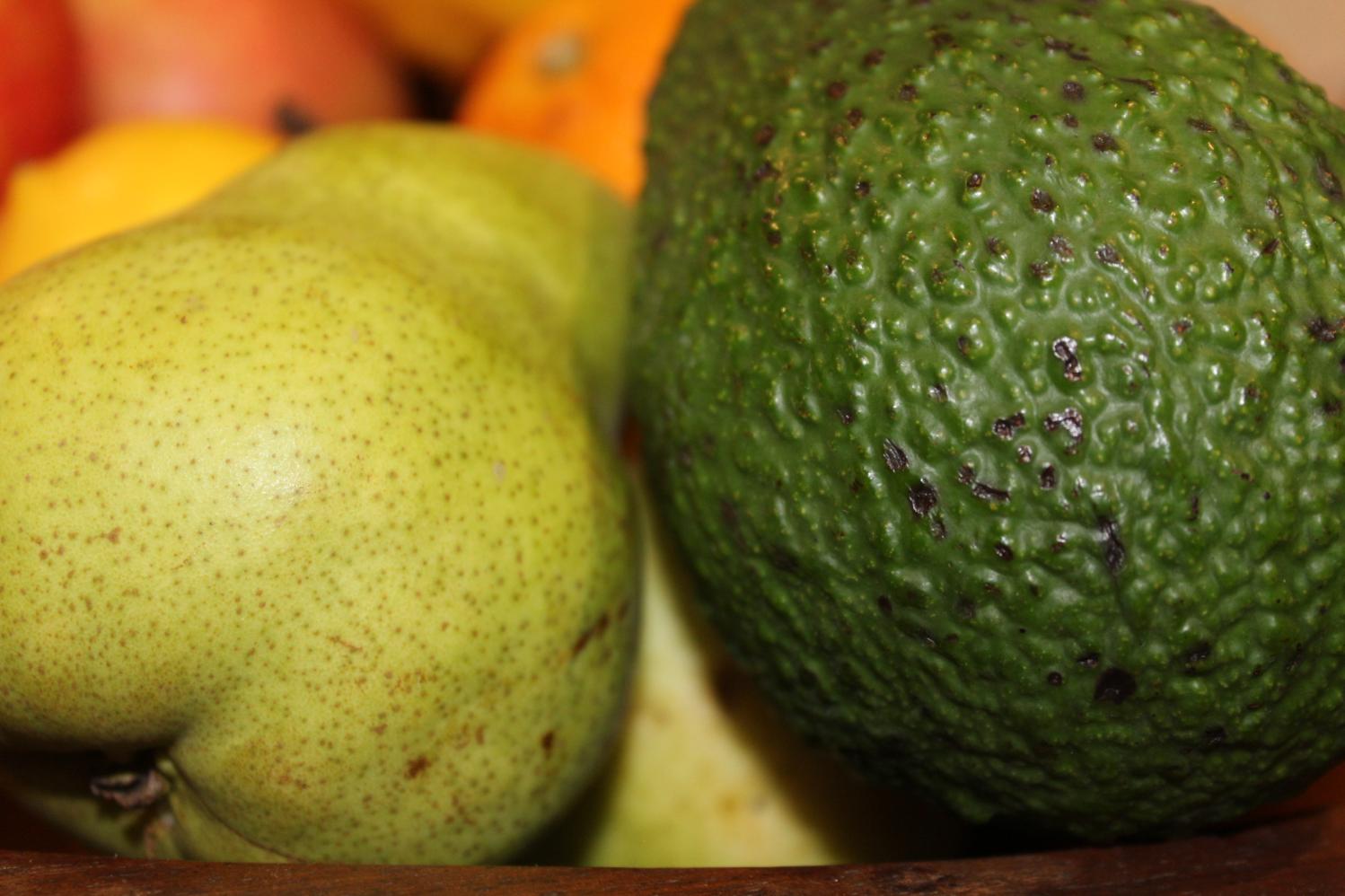 Although  the best quality pears come into season in June and July you can still get some sweet dripping with juice varieties now, particularly the Packham Pear, a NSW developed variety. Loaded with Vitamin C, fibre and antioxidants, these are just what your body needs at this time of year.

Avocadoes are also in season in NSW, with prices reflecting the crop coming in. These are best enjoyed as guacamole, 'smashed' on toast with a few slices of tomato, as part of an omelette, or even chopped up and tossed through your favourite pasta dish at the last minute.

To go with these, or for desert, may we suggest: 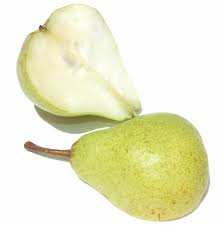 Dressing: place the olive oil and vinegar in a small bowl. Season with salt and pepper and whisk to combine.
Place the rocket, lettuce, Parmesan, walnuts and chives in a large bowl. Peel, quarter and core the pear. Slice each quarter into four. Add to the salad with the dressing and toss well. Serve immediately.

Preheat oven to 180°C. Line a round 22cm (base measurement) cake pan with non-stick baking paper. Coarsely chop the dates and place in a heatproof bowl. Add the water and bicarbonate of soda. Set aside to cool. Use a fork to coarsely mash.

Use an electric beater to beat the caster sugar and 125g of the butter in a bowl until pale and creamy. Beat in the egg. Sift the flour and cinnamon over the egg mixture. Add the date mixture and pear. Use a large metal spoon to fold until well combined. Pour into the lined pan. Bake for 1 hour 10 minutes or until a skewer inserted into the centre comes out clean.
Place the cream, brown sugar and remaining butter in a small saucepan over medium heat. Cook, stirring, for 5 minutes or until well combined.
Slice the cake and drizzle over the warm toffee sauce to serve.

The Packham pear was developed by Charles Packham at his property "Clifton" at Garra, near Molong in the New South Wales central west in 1895.

A Paragon Pear. Molong - Monday.-Mr. Charles Packham, an enthusiastic orchardist at Garra, has achieved much success at recent shows with a new pear propagated by him, which last year the Agricultural Department recommends him to call "Packham Triumph." 'He recently forwarded more samples to the department, on which Mr. Allen, fruit expert, reports: "This is without exception the best pear I have ever seen, and is well named Packham's Triumph. It is a triumph in pear culture, the flavour being quite unique-a beautiful sugary flavour, yet sufficiently tart to prevent it becoming insipid-melting, juicy, and pleasantly perfumed." A Paragon Pear. (1901, May 18). Goulburn Evening Penny Post(NSW : 1881 - 1940), p. 6. Retrieved from http://nla.gov.au/nla.news-article98726178

THE PACKHAM TRIUMPH PEAR.
Mr. C. H. Packham, of Garra, near Molong, has received an order from Mr. Luther Burbank, of the United States, for some grafting wood of his famous Packham's Triumph pear, declared by Australian fruit experts to be the best variety known. Mr. Burbank has written that he is much interested in the pear in question. THE PACKHAM TRIUMPH PEAR. (1906, September 26). The Farmer and Settler (NSW : 1906 - 1957), p. 5. Retrieved from http://nla.gov.au/nla.news-article109686071 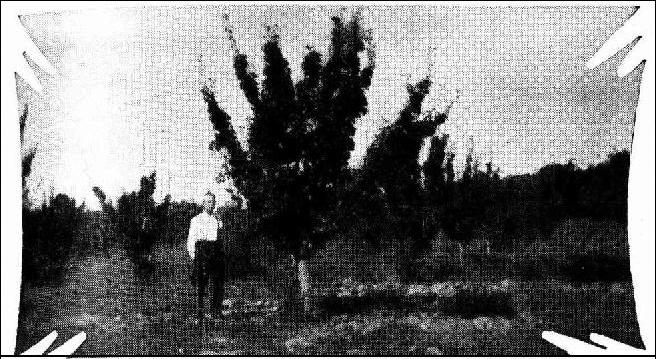 THE ORIGINAL PACKHAM’S TRIUMPH PEAR TREE, in the old orchard on Mr. S. W. Packham’s property at Garra near Molong. It was here that the late Charles Henry Packham carried out his successful experiments in cross-pollination. Photo courtesy S. W. Packham.

THE orchards surrounding the little village of Garra, in the Molong district of central western New
South Wales, were the scene of extensive experiments in the hybridisation of fruits during the nineties of the last century. A large measure of success attended the efforts of at least one resident of that district—Mr. Charles Henry Packham, who had been specialising in the pollination and cross-pollination
of pears, but little did he think when he evolved what was later to be known as Packham's Triumph, that
his name would be perpetuated throughout the civilised world by the popularity of this delicious fruit. 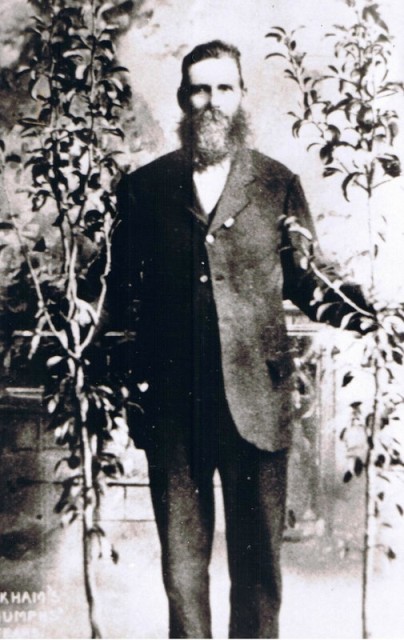 CHARLES HENRY PACKHAM, who died in 1909, at the age of 67 years, was born in the Parramatta district, his father being one of the pioneer settlers, and the subject of this article spent a life-long association with primary production, principally in the Molong district.

Eventually, he purchased "Clifton," Garra, where he at first conducted general farming operations. There was a small orchard on the property, in which he began to take a keen interest, and started experimenting along original lines; he was an intelligent experimentalist with an ideal, but his methods were not those which lead to great financial success-rather those of one who delights to give something new and better to his fellow man, without thought of reward.

IN 1895 came the great success of his work in this direction, following the pollination of the Eusdale St. Germain (sometimes called the Bell)pear with the Williams' Bon Chretien. From this pear (which contained from five to seven seeds) seedlings were planted out, until, at his death in 1909, there were 20,000 seedlings on his Garra property. The seedlings were planted out one foot apart in rows, with six feet between the rows. The idea was that every sixth tree in the row was to be the main tree; he would take buds from each tree for the main, and the rest of the work he would leave to nature to complete.

HIS enthusiasm for this work was so great that he was experimenting continuously along new lines in quest of something new.
On one occasion, he exhibited at the Sydney Royal Show a pear tree about three feet high, bearing fruit. This he obtained by selecting a short upright limb of a Bell pear tree, inserting the limb in a hole cut in a piece of timber, so that the board would fit snugly near the joint, grafting roots on the limb above the board, placing a metal container similar in shape to an inverted bucket, filled with soil, around the roots, and at an opportune time, cutting the limb off the main tree. This limb had, of course, been budded previously with Triumph.
From the first crop of Triumphs, samples were sent to Mr. W. J. Allan, fruit expert of the Department of Agriculture, who reported that it was the best pear he had ever tasted; in fact, he said, "they are unique."

Mr. Packham received many requests for trees, and these were propagated and disposed of to Government Experimental farms. Some were sent to Tasmania, and later placed on the market by nurserymen.

HIS enthusiasm did not abate, and shortly afterwards another pear, which bore the name of Packham's Late, was produced. The fruit of this is larger than that of the Triumph, and longer in shape, being also of a lighter green in colour. This, however, did not catch the public’s fancy to the same ' extent as the Triumph, taking too long to ripen, and were mostly sold for cooking purposes. These two varieties are still regarded as among the best pears for cold storage purposes.

Unfortunately, there is no record of how the Packham's Late was originally produced. Still another variety was evolved in Packham's Autumn Nella, which is similar to the Winter Nella in flavour, but a little longer in shape and a midseason pear; this variety did not goon to the market, but in the old orchard there still remains a tree of Packham's Autumn Nella in full bearing. The only fertiliser used during the experiments was stable manure.

MR. S. W. PACKHAM, a son of our experimenter, still lives in the Molong district, where he is interested in fruit-growing. He is also interested in public affairs, and is an alderman of the Molong Municipality, president of the local Fruitgrowers' Association, and secretary of the Copper Hill Agricultural Bureau, while it is only natural that his opinions in matters appertaining to fruit-growing should be held in respect.

It is interesting to note that the orchard at Garra is practically all good sandy loam, with a westerly aspect, which Mr. Packham does not consider a disadvantage, and assertsthat he can grow anything in the nature of pome fruit and oranges and lemons on the high lands.
"We take no notice of the situation now," he says. “As. long as the soil and the climate are suitable, anything will grow well."
He is of the opinion that there is no set limit to the useful life of a pear tree, so long as it is healthy. He has had pear trees which were put in over fifty years ago, and they were growing vigorously and cropping heavily until about eight years ago, when the orchard was grubbed, as the trees were a nuisance owing to the prevalence of so many pests, and the trees were on good land that could be used to better advantage. He is now raising a quantity of Late and Triumph seedlings to graft or bud to form another orchard on this area.

THE original Triumph tree was destroyed about eighteen years ago. In fact, Mr. S. W. Packham, who was away from the district for about, five years, on his return did not agree with the raising of so many, seedlings, and later grubbed them all out, including the those in which- his father, met with greatest success in cross-pollinating and evolving the new strains and discoveries.
Official figures show that the Packham's Triumph is the second most popular pear among growers in this State, there being in 1928 a total of 123,000 Williams and 72,000 Packham's Triumph trees.

The Department of Agriculture, owing to complaints of bad setting of the fruit, particularly in tableland districts, conducted a five years' test, and arrived at the conclusion that the lack of cross-pollination was the main cause of the trouble. In this regard, Mr. Packham states that there has never been any cause for complaint so far as the Garra district is concerned. The officers of the Department report that that they were led to the conclusion from their extensive experiments, that Williams' prove an efficient pollinator for the Triumph, but that it commenced blossoming a little later.

Of the varieties tested, Josephine de Malines, Baronne de Mello and Beurre Superfine usually blossom at the same time as the Triumph, and from this viewpoint they were most satisfactory for interplanting than Williams, Josephine being the first choice, as it is the best commercial variety, but to ensure the most satisfactory pollination in a commercial orchards, it was suggested that there should be at least two pollinating varieties, and at least one hive of bees to each acre to  ensure a maximum transference of pollen. Historic Molong ORCHARD that gave to the WORLD a New and DELICIOUS PEAR. (1933, September 1). The Land(Sydney, NSW : 1911 - 1954), p. 9. Retrieved from http://nla.gov.au/nla.news-article104243760