I’m A Luddite. You Should Be One Too 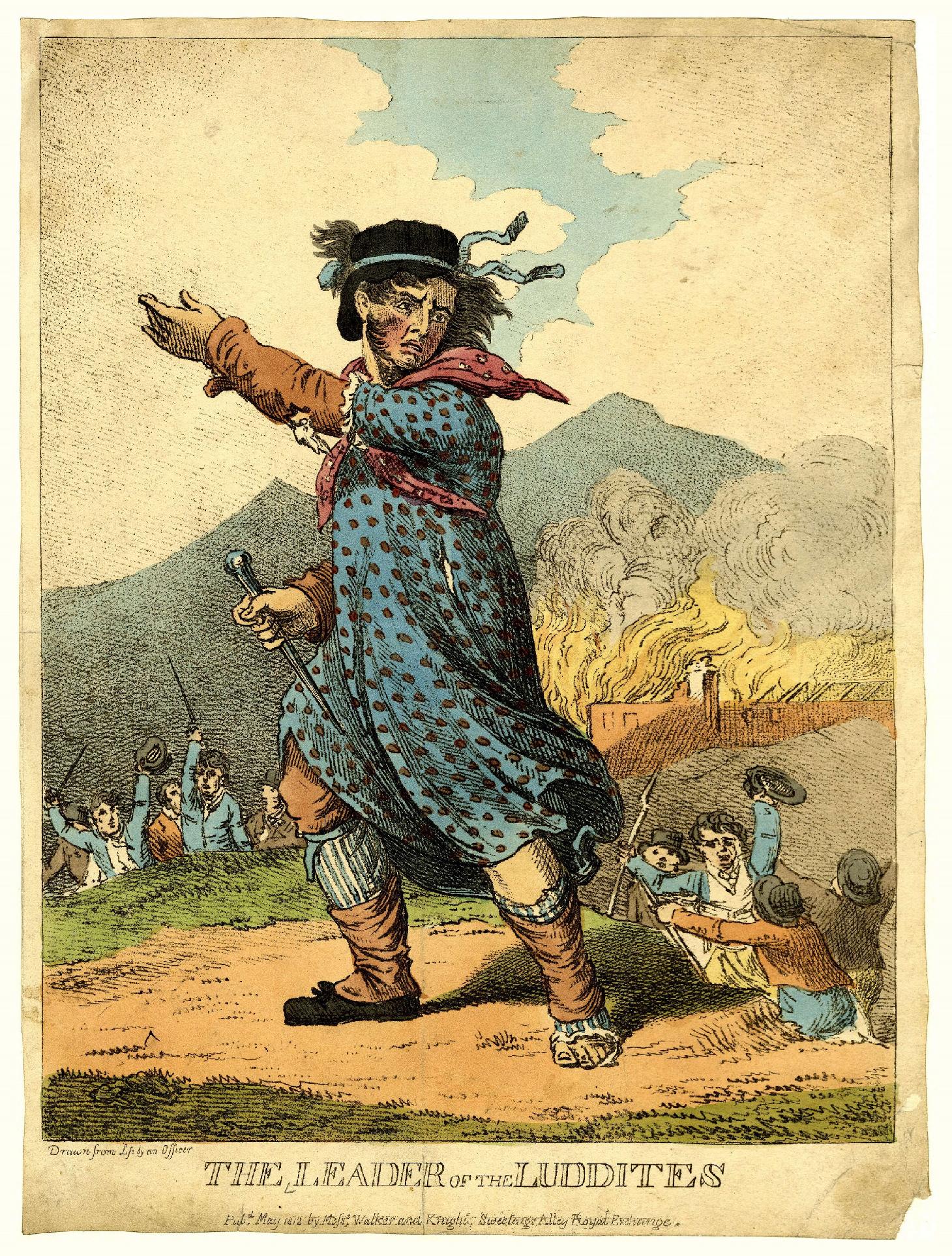 I’m a Luddite. This is not a hesitant confession, but a proud proclamation. I’m also a social scientist who studies how new technologies affect politics, economics and society. For me, Luddism is not a naive feeling, but a considered position.

And once you know what Luddism actually stands for, I’m willing to bet you will be one too — or at least much more sympathetic to the Luddite cause than you think.

Today the term is mostly lobbed as an insult. Take this example from a recent report by global consulting firm Accenture on why the health-care industry should enthusiastically embrace artificial intelligence:

Excessive caution can be detrimental, creating a luddite culture of following the herd instead of forging forward.

To be a Luddite is seen as synonymous with being primitive — backwards in your outlook, ignorant of innovation’s wonders, and fearful of modern society. This all-or-nothing approach to debates about technology and society is based on severe misconceptions of the real history and politics of the original Luddites: English textile workers in the early 19th century who, under the cover of night, destroyed weaving machines in protest to changes in their working conditions.

Our circumstances today are more similar to theirs than it might seem, as new technologies are being used to transform our own working and social conditions — think increases in employee surveillance during lockdowns, or exploitation by gig labour platforms. It’s time we reconsider the lessons of Luddism.

A brief — and accurate — history of Luddism

Even among other social scientists who study these kinds of critical questions about technology, the label of “Luddite” is still largely an ironic one. It’s the kind of self-effacing thing you say when fumbling with screen-sharing on Zoom during a presentation: “Sorry, I’m such a Luddite!”

It wasn’t until I learned the true origins of Luddism that I began sincerely to regard myself as one of them.

The Luddites were a secret organisation of workers who smashed machines in the textile factories of England in the early 1800s, a period of increasing industrialisation, economic hardship due to expensive conflicts with France and the United States, and widespread unrest among the working class. They took their name from the apocryphal tale of Ned Ludd, a weaver’s apprentice who supposedly smashed two knitting machines in a fit of rage.

The contemporary usage of Luddite has the machine-smashing part correct — but that’s about all it gets right.

First, the Luddites were not indiscriminate. They were intentional and purposeful about which machines they smashed. They targeted those owned by manufacturers who were known to pay low wages, disregard workers’ safety, and/or speed up the pace of work. Even within a single factory — which would contain machines owned by different capitalists — some machines were destroyed and others pardoned depending on the business practices of their owners.

Second, the Luddites were not ignorant. Smashing machines was not a kneejerk reaction to new technology, but a tactical response by workers based on their understanding of how owners were using those machines to make labour conditions more exploitative. As historian David Noble puts it, they understood “technology in the present tense”, by analysing its immediate, material impacts and acting accordingly.

Luddism was a working-class movement opposed to the political consequences of industrial capitalism. The Luddites wanted technology to be deployed in ways that made work more humane and gave workers more autonomy. The bosses, on the other hand, wanted to drive down costs and increase productivity.

Third, the Luddites were not against innovation. Many of the technologies they destroyed weren’t even new inventions. As historian Adrian Randall points out, one machine they targeted, the gig mill, had been used for more than a century in textile manufacturing. Similarly, the power loom had been used for decades before the Luddite uprisings.

It wasn’t the invention of these machines that provoked the Luddites to action. They only banded together once factory owners began using these machines to displace and disempower workers.

The factory owners won in the end: they succeeded in convincing the state to make “frame breaking” a treasonous crime punishable by hanging. The army was sent in to break up and hunt down the Luddites.

The Luddite rebellion lasted from 1811 to 1816, and today (as Randall puts it), it has become “a cautionary moral tale”. The story is told to discourage workers from resisting the march of capitalist progress, lest they too end up like the Luddites.

Today, new technologies are being used to alter our lives, societies and working conditions no less profoundly than mechanical looms were used to transform those of the original Luddites. The excesses of big tech companies - Amazon’s inhumane exploitation of workers in warehouses driven by automation and machine vision, Uber’s gig-economy lobbying and disregard for labour law, Facebook’s unchecked extraction of unprecedented amounts of user data - are driving a public backlash that may contain the seeds of a neo-Luddite movement.

As Gavin Mueller writes in his new book on Luddism, our goal in taking up the Luddite banner should be “to study and learn from the history of past struggles, to recover the voices from past movements so that they might inform current ones”.

What would Luddism look like today? It won’t necessarily (or only) be a movement that takes up hammers against smart fridges, data servers and e-commerce warehouses. Instead, it would treat technology as a political and economic phenomenon that deserves to be critically scrutinised and democratically governed, rather than a grab bag of neat apps and gadgets.

In a recent article in Nature, my colleagues and I argued that data must be reclaimed from corporate gatekeepers and managed as a collective good by public institutions. This kind of argument is deeply informed by the Luddite ethos, calling for the hammer of antitrust to break up the tech oligopoly that currently controls how data is created, accessed, and used.

A neo-Luddite movement would understand no technology is sacred in itself, but is only worthwhile insofar as it benefits society. It would confront the harms done by digital capitalism and seek to address them by giving people more power over the technological systems that structure their lives.

This is what it means to be a Luddite today. Two centuries ago, Luddism was a rallying call used by the working class to build solidarity in the battle for their livelihoods and autonomy.

And so too should neo-Luddism be a banner that brings workers together in today’s fight for those same rights. Join me in reclaiming the name of Ludd!

About 1813 the midland and northern counties of England were in a terrible disturbed state, owing to combinations of artisans to destroy machinery, leagued together under a mythical chieftain named King Lud. Only a little time before that date the Orders in Council were in force prohibiting the British from trading with any powers in aliance with France, and the country was in consequence reduced almost to ruin.

Archbishop Creyke, when a youth of seventeen, witnessed a wholesale execution of these unfortunate offenders at York. This took place on Saturday, Jan. 18, 1813, at York Castle, when no fewer than fourteen people were hanged at one time under a statute of George III., which made it felony to combine together for illegal purposes. By their death fourteen wives were widowed, fifty-seven children made fatherless, and eight turned helpless on the world.

Miss Bronte, in one of her novels, " Shirley," has depicted this period, and though a work of fiction, there is every reason to believe that it affords a true picture of the melancholy state and condition of the North of England in the early part of the present century. THE LUDDITES. (1890, November 8). Ovens and Murray Advertiser (Beechworth, Vic. : 1855 - 1918), p. 3. Retrieved from http://nla.gov.au/nla.news-article200255687