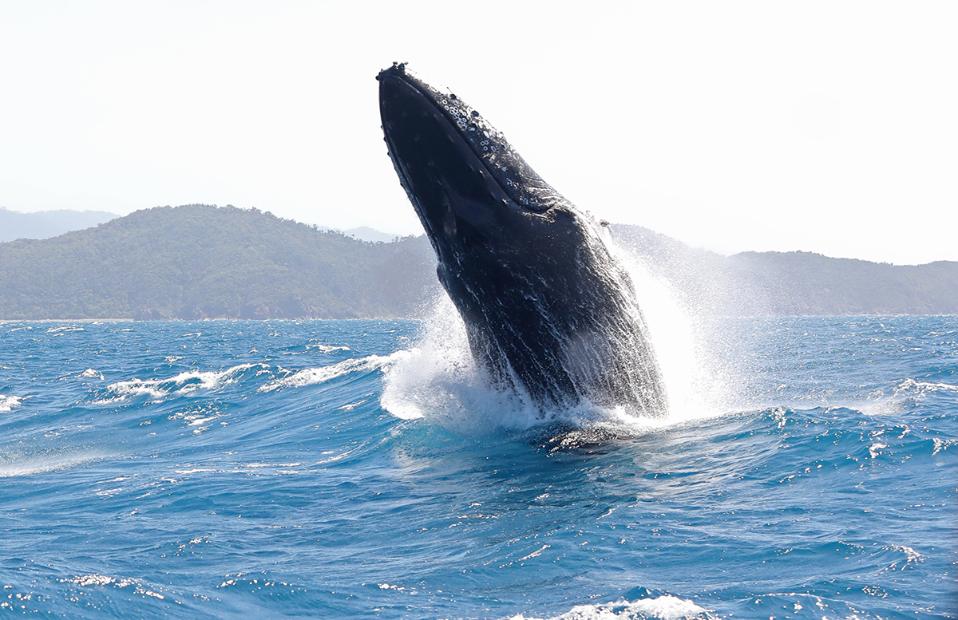 Wind over tide made for some very lumpy seas and there were a small number of casualties.  Team Zen was this afternoon working hard to repair the vang on Gordon Ketelbey’s TP52 so they can complete the sixth and final day of the annual winter series that has drawn the second largest fleet to the Whitsundays.

A mother Humpback and calf breached in tandem for the media, away from the race fleet which was doing a variety of courses in the trade winds that have blown all week and were once again in fine form. For Friday August 23, 18-22 knots of SE breeze was on the dial for the starts in Dent Passage and on the Eastern course, and this time the pressure bucked the trend and held until the race finish.

Day five of racing, day 6 of Race Week, thanks to Broadkast

The best of the day’s aerial images came from the Multihull Racing division with two Extreme 40s finishing the islands race, Michel Van Der Zwaard’s Back in Black and The Boat Works, skippered by Julian Griffiths.

Karl Kwok’s MOD70 Beau Geste tearing around the island paradise over two short races made a spectacular sight, the record-setting trimaran not able to make a dent on corrected time in the division, but having a blast.

“It’s tough getting this boat around those islands given it’s designed for long ocean races, so you just have to pick your times to reef and then make the most of the downwind to try and get away from the 40-footers.

“We’re really just getting back into spending more time on the boat before we head back to New Zealand for the Coastal Classic, so it’s mostly about recalibrating. This boat is very wet therefore we are enjoying sailing in the tropics. We’ve decided it’s a warm water boat!”

Aboard Back in Black was Olympian Carrie Smith, at Race Week to launch Hamilton Island’s partnership with Australian Sailing’s SheSails initiative. She stepped off the Extreme still buzzing, and saturated from the high-speed saltwater hosing.

“We had a great day today” said Rutherford adding, “the highlight was powering downwind at 25 knots and overtaking all the other fleets that started before us. It’s very close with Heatwave, so we’ve got to stay two places ahead of them tomorrow, if we’re going to win our division.”

Top results in two of the three IRC divisions are settled without the final race being sailed.

Marcus Blackmore’s TP52 Hooligan is now a five-time winner at Race Week, and though they don’t need to sail on Saturday, the team has decided they’ll be on the IRC division 1 start line.

“The message is that if you want to win Hamilton Island Race Week you need a good boat and a good crew, and I’m lucky enough to have both. It’s a very satisfying win,” Blackmore said. “These guys really get on well together and it’s the old adage ‘a team of champions will never beat a championship team’, and I’ve got a champion team.”

Gordon Ketelbey met the waiting media back at the marina and provided details of Zen’s disappointing forced retirement. “It was windy and bouncy, and the vang broke in a big way. We jury rigged it then we heard another bang. It’s a reasonably easy fix; we have a trailer here with spare parts and we’ll be doing some carbon work this afternoon.”

Regatta updates, including live streaming, at www.facebook.com/raceweek  and Instagram @hamiltonislandraceweek 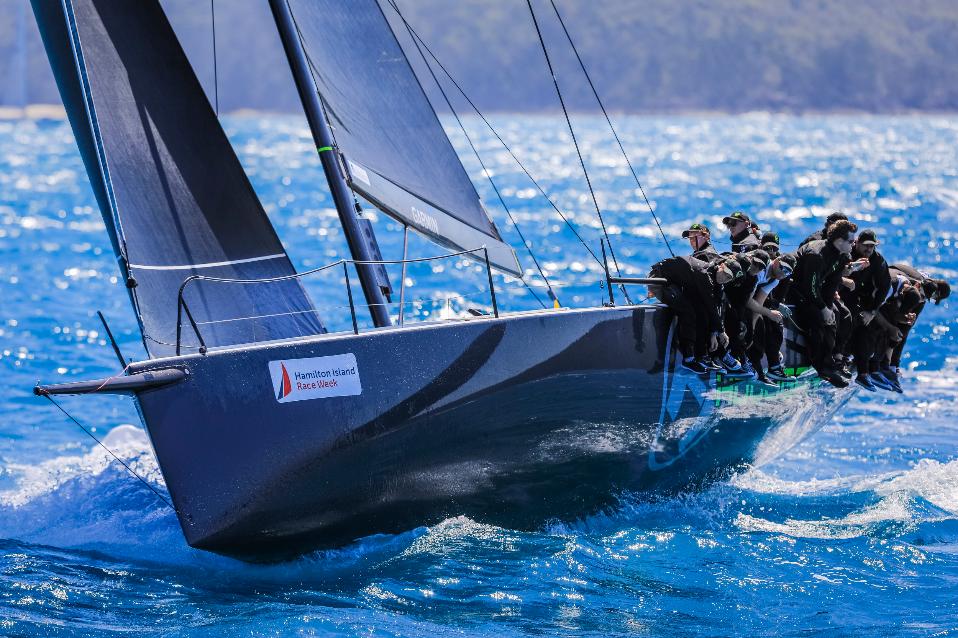 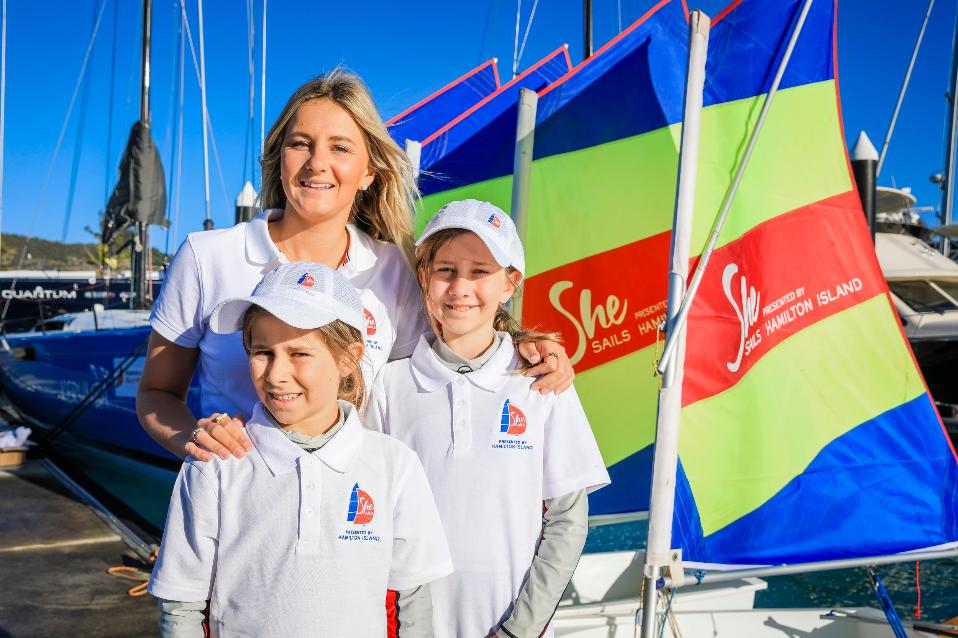 The brand new Tf10 Mad Max up on one hull through a gybe and Kim William’s Melges 32 Rock n Roll living up to its name by performing a massive wipe-out at the northern end of Dent Island in a gust made for a colourful day four of racing at Hamilton Island Race Week.

The second-largest fleet in event history is finding the 36th edition the windiest for some years and the trade winds are set to hold for the series’ two remaining days. On the cards for Friday is 20-25 knots though a daily trend is fresh morning breeze which moderates significantly after lunch. Today the fleet was hit by a heavy 30 knot south-easterly as they nosed out of the marina and a few hours on they were re-moding for single figure breeze.

For Van Der Zwaard the points lead is reward for tenacity for staying out when the other Extreme 40s pulled the pin early, given the sea-state out on the eastern starting area. He does have an enviable crew of national and world champions in various multihull classes on board, including the current Tornado world champions Brett Burville and Max Puttman.

“We sailed pretty conservatively, reaching across the bottom of Hamilton Island and Dent Island at 21 – 22 knots; just ploughing into those waves we held back a bit,” said the skipper. “The closer we got to the top of Long island the flatter it got, and we let go. We were going pretty hot then.”

In true Aussie fashion, crewman Rohan Veal was happy to tease the other Extreme crews: “we’ll go to the hardware store and buy some cement, and give them a spoonful each”, though he added that the Back in Black crew would try to find a way to support the other crews for the remainder of the regatta, Australia’s best-loved offshore series that began in 1984.

There's a ding-dong battle in progress at the top of IRC division 3 results, with Ross Wilson’s Beneteau First 47.7 Eagle Rock leading Bruce McCracken's First 45 Ikon by five points. It was Ikon’s day today, taking two bullets in tricky conditions of easing winds and lumpy seas. “We’re very happy with how today went. It was all about trimming and our guys handled that really well; we also hung onto our kite longer than others and that paid off, and I’d put our margin in the second race down to sail selection,” said McCracken.

Four races in and two to go and Mark Beale’s Clubman 8 called Ray White Kameruka leads the Trailable Yacht division by a slim one-point margin. “We are in with a chance but there are a couple making a strong finish - they are the ones to watch out for!” Beale said after racing. “Hamilton Island is a step-up for the after-racing entertainment and 234 boats is just crazy, as is dodging the big boats; an average boat here is a 50-footer! Hopefully we can get up and get a prize at Saturday’s presentation dinner.”

The annual Prix d’Elegance parade of yachts before the judges on the yacht club’s Bommie deck was as engaging and entertaining as ever. Surprise packages this year came from the IRC divisions with the Wild Oats X team offering a fine tribute to the late Bob Oatley, all dressed as Popeye, the name by which he was known to his family and close friends. Marcus Blackmore’s entire team of pro sailors and the owner were decked out head-to-toe in tight-fitting green body suits, reflecting the alien beings of Area 51 in the Nevada Desert. 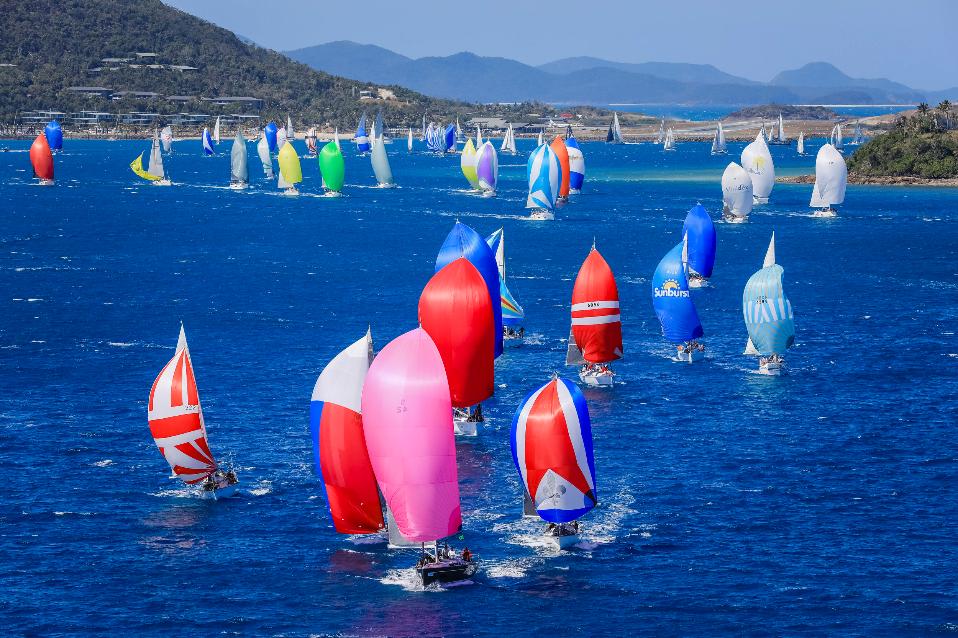 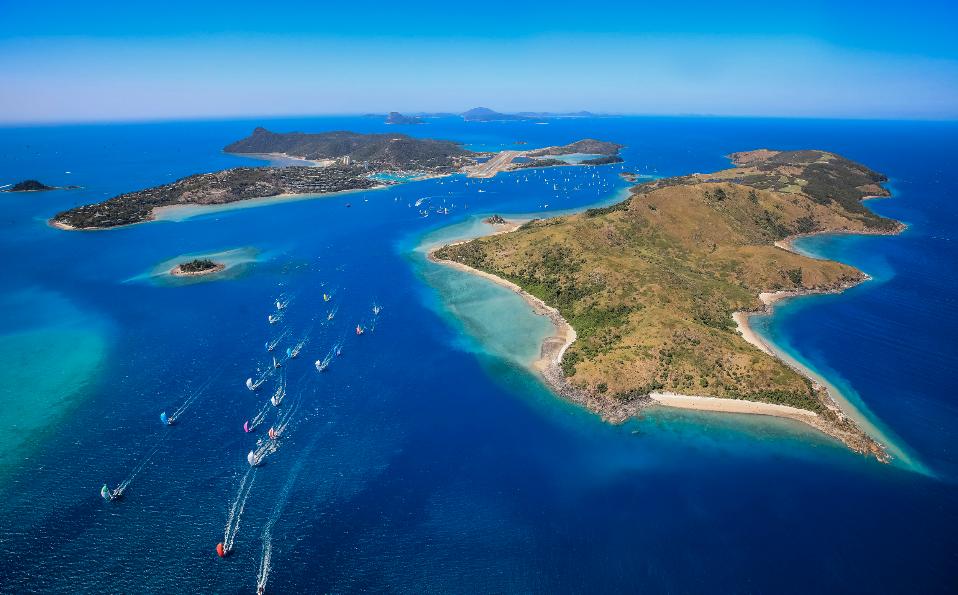