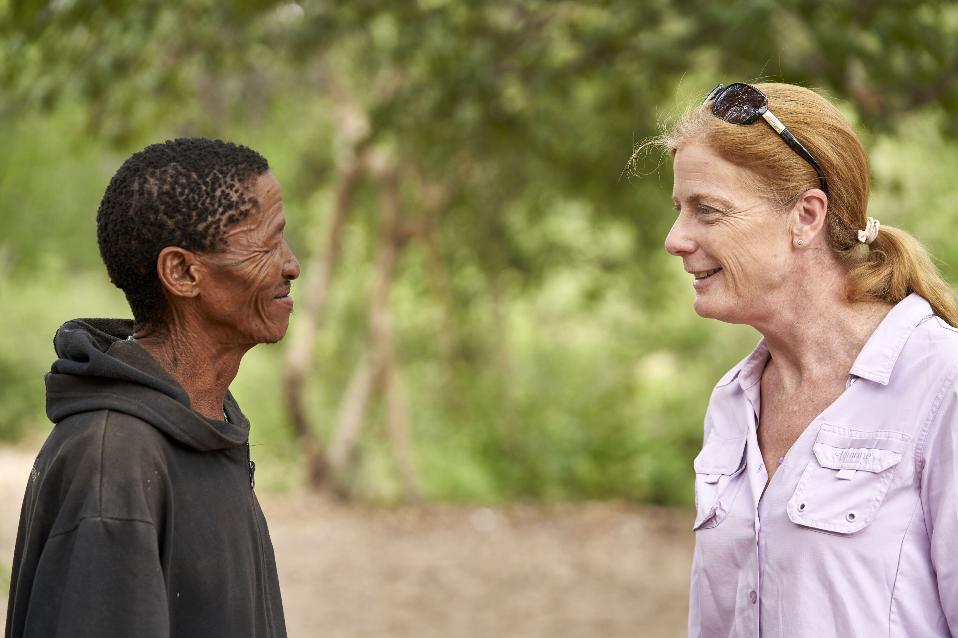 Vanessa Hayes discussing the significance of the region with Headman ǀkun ǀkunta from an extended Ju/’hoansi family. Living within the homeland region of the greater Kalahari of Namibia, Vanessa has been visiting ǀkun and his extended family for over a decade. /kun was proudly one of the many participants who donated his mitogenome to this study. Credit: Chris Bennett, Evolving Picture, Sydney, Australia

Where was the evolutionary birthplace of modern humans? The East African Great Rift Valley has long been the favoured contender – until today.

Our new research has used DNA to trace humanity’s earliest footsteps to a prehistoric wetland called Makgadikgadi-Okavango, south of the Great Zambezi River.

Our analysis, published in Nature today, shows that the earliest population of modern humans (Homo sapiens sapiens) arose 200,000 years ago in an area that covers parts of modern-day Botswana, Namibia and Zimbabwe. 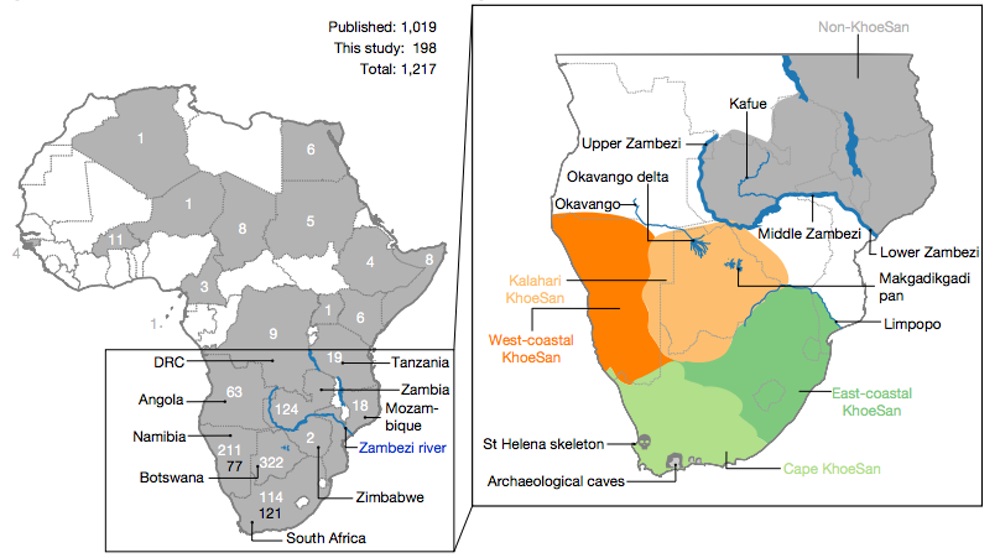 The left map shows the distribution of ancestral DNA among the sampled population. This allowed the ancestral homeland to be pinpointed to a region (shown on the right in orange) south of the Zambezi River, centred on northern Botswana. Chan et al., Nature 2019

Today it is a dry and dusty land with scattered salt pans, and it is hard to believe that modern humans lived and thrived in wetlands here for 70,000 years before our ancestors began to explore the rest of Africa, and ultimately the world.

If we think of all modern humans as occupying a particular place on a huge family tree, logically we should find the most diverse mitogenomes at the very base of the tree, because it is the ultimate source of all the various branches.

We already know that genetic data points to southern Africa as the cradle of humanity (unlike fossil evidence, most of which has been found in East Africa). But we wanted to refine our search still further, to pinpoint the exact location where humans first evolved.

To do this, we turned our attention to a group of people known as the KhoeSan. KhoeSan have the most diverse mitogenomes of anyone on Earth, which suggests their DNA most closely resembles that of our shared common ancestors. If we all sit on branches of the human family tree, then KhoeSan are the tree’s trunk.

Linguistically, KhoeSan people are click speakers, while culturally KhoeSan are foragers, with groups of San people still practising the old ways of life – hunting and gathering for subsistence.

Members of our research team have spent a decade working with KhoeSan communities, as well as people from other ethnicities and language groups, in Namibia and South Africa.

By generating mitogenome data for around 200 rare or newly discovered sub-branches of KhoeSan lineages, and merging them with all available data, we were able to zoom in on the very base of our evolutionary tree.

It is now clear our ancestors must have dispersed from a region south of the Zambezi River. This is consistent with geographical, archaeological and climate data, including the fact that this area would have been a fertile wetland at the time the first modern humans emerged.

Geological evidence suggests that at this time, the prehistoric Makgadikgadi lake that had dominated the region for millions of years had begun to break up through the shifting of the land. This would have created a vast wetland region, ideal to sustain life.

But if it was so ideal, why did our ancestors begin to explore other places between 130,000 and 110,000 years ago, first heading northeast and later southwest from the ancestral home?

Climate data suggests that at around that time the region experienced a huge drought. Notably, about 130,000 years ago humidity increased to the northeast of the homeland, and 110,000 years ago the same happened to the southwest. We speculate that this created passages of lush vegetation for our ancestors to leave the homeland, most likely following the game animals that were also forging into new regions.

What’s more, our genetic data suggests the southerly migrants went on to inhabit the entire southern coast of Africa, with multiple sub-populations and huge population growth. Archaeological findings from the Blombos caves in South Africa have shown this region to be rich in evidence for cognitive human behaviour as early as 100,000 years ago. Again, we were amazed at how well we could match timeline data, crossing different yet complimentary disciplines that have historically not worked together. This also allowed us to further speculate about the success of the southerly migrants being attributed to adapting their skills to the abundance of life in the oceans.

These earliest explorers left behind a homeland population, one that still remains within the ancestral lands today, having adapted to the much drier landscape. It has been a pleasure to spend the past decade engaging with the last descendants of humanity’s homeland, including the Ju/’hoansi people of the Kalahari in Namibia.

The Ju/’hoansi, who still practise their traditional way of life, are excited about our findings. They believe our study captures a history that they have told for generations by word of mouth alone. This is not only their story, but all of ours. 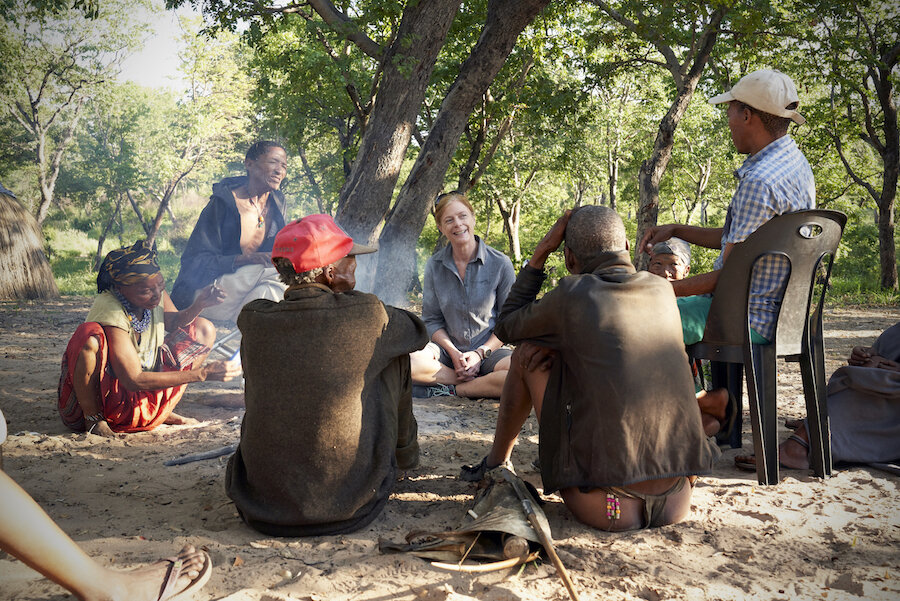 Researcher Vanessa Hayes with the Ju/’hoansi people in the ancestral homeland of humanity. Chris Bennett/Evolving Picture

This Article first appeared in The Conversation - republished under a Creative Commons licence.

The Homeland Of Modern Humans

A study has concluded that the earliest ancestors of anatomically modern humans (Homo sapiens sapiens) emerged in a southern African 'homeland' and thrived there for 70 thousand years.

The breakthrough findings are published in the prestigious journal Nature today.

The authors propose that changes in Africa's climate triggered the first human explorations, which initiated the development of humans' genetic, ethnic and cultural diversity.

This study provides a window into the first 100 thousand years of modern humans' history. DNA as a time capsule.

"It has been clear for some time that anatomically modern humans appeared in Africa roughly 200 thousand years ago. What has been long debated is the exact location of this emergence and subsequent dispersal of our earliest ancestors," says study lead Professor Vanessa Hayes from the Garvan Institute of Medical Research and University of Sydney, and Extraordinary Professor at the University of Pretoria.

"Mitochondrial DNA acts like a time capsule of our ancestral mothers, accumulating changes slowly over generations. Comparing the complete DNA code, or mitogenome, from different individuals provides information on how closely they are related."

In their study, Professor Hayes and her colleagues collected blood samples to establish a comprehensive catalogue of modern human's earliest mitogenomes from the so-called 'L0' lineage. "Our work would not have been possible without the generous contributions of local communities and study participants in Namibia and South Africa, which allowed us to uncover rare and new L0 sub-branches," says study author and public health Professor Riana Bornman from the University of Pretoria.

"We merged 198 new, rare mitogenomes to the current database of modern human's earliest known population, the L0 lineage. This allowed us to refine the evolutionary tree of our earliest ancestral branches better than ever before," says first author Dr. Eva Chan from the Garvan Institute of Medical Research, who led the phylogenetic analyses.

By combining the L0 lineage timeline with the linguistic, cultural and geographic distributions of different sub-lineages, the study authors revealed that 200 thousand years ago, the first Homo sapiens sapiens maternal lineage emerged in a 'homeland' south of the Greater Zambezi River Basin region, which includes the entire expanse of northern Botswana into Namibia to the west and Zimbabwe to the east.

A homeland perfect for life to thrive

"Prior to modern human emergence, the lake had begun to drain due to shifts in underlying tectonic plates. This would have created, a vast wetland, which is known to be one of the most productive ecosystems for sustaining life," says Dr. Moore.

"We observed significant genetic divergence in the modern humans' earliest maternal sub-lineages, that indicates our ancestors migrated out of the homeland between 130 and 110 thousand years ago," explains Professor Hayes. "The first migrants ventured northeast, followed by a second wave of migrants who travelled southwest. A third population remained in the homeland until today."

"In contrast to the northeasterly migrants, the southwesterly explorers appear to flourish, experiencing steady population growth," says Professor Hayes. The authors speculate that the success of this migration was most likely a result of adaptation to marine foraging, which is further supported by extensive archaeological evidence along the southern tip of Africa.

To investigate what may have driven these early human migrations, co-corresponding author Professor Axel Timmermann, Director of the IBS Center for Climate Physics at Pusan National University, analysed climate computer model simulations and geological data, which capture Southern Africa's climate history of the past 250 thousand years.

"Our simulations suggest that the slow wobble of Earth's axis changes summer solar radiation in the Southern Hemisphere, leading to periodic shifts in rainfall across southern Africa," says Professor Timmermann. "These shifts in climate would have opened green, vegetated corridors, first 130 thousand years ago to the northeast, and then around 110 thousand years ago to the southwest, allowing our earliest ancestors to migrate away from the homeland for the first time."

This study uniquely combined the disciplines of genetics, geology and climatic physics to rewrite our earliest human history.