How Much Plastic Does It Take To Kill A Turtle? - Very Little. 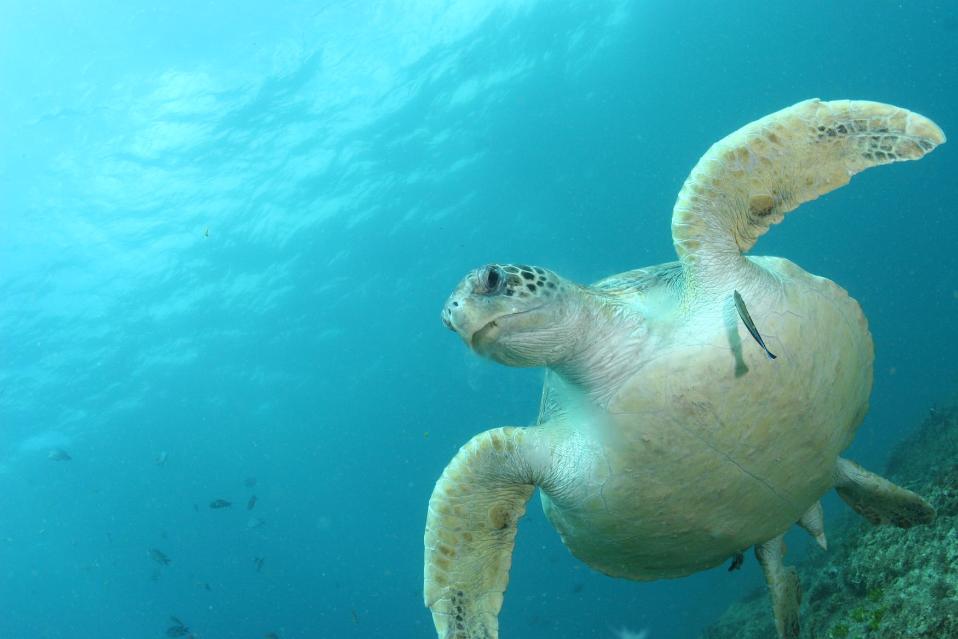 A healthy green sea turtle is cleaned by a cleaner wrasse after enjoying a meal of jellyfish off of North Stradbroke Island. Credit: Kathy Townsend, University of Sunshine Coast

Analysis of nearly 1000 turtles found dead and washed up on beaches around Australia  showed that the more plastic a turtle consumes the greater the likelihood that it was killed by that plastic.

Previously, it was unclear as to whether the plastic in our oceans is actually killing sea turtles, or whether they are simply ingesting it without significant harm.

"We knew that turtles were consuming a lot of plastic, but we didn't know for certain whether that plastic actually caused the turtles' deaths, or whether the turtles just happened to have plastic in them when they died," Principal Research Scientist with CSIRO Oceans and Atmosphere, Dr Chris Wilcox said.

"In other words, we wanted to know 'How much plastic is too much plastic?' for sea turtles."

The scientists found that once a turtle had 14 plastic items in its gut, there was a 50 per cent likelihood that it would cause death. However, that's not to say that a turtle won't die if they consume less than 14 pieces of plastic.

"Even a single piece of plastic can kill a turtle," Lecturer in Animal Ecology at the University of the Sunshine Coast Dr Kathy Townsend said.

"Some of the turtles we studied had eaten only one piece of plastic, which was enough to kill it. In one case, the gut was punctured, and in the other, the soft plastic clogged the gut."

The research showed that a turtle had a 22 per cent chance of dying if it eats just one piece of plastic.

Sea turtles were among the first animals recorded to be ingesting plastic debris, a phenomenon that occurs in every region of the world and in all seven marine turtle species.

Globally, it is estimated that approximately 52 per cent of all sea turtles have eaten plastic. Determining the effect this is having on turtle mortality is a huge step forwards for understanding the impact of plastic pollution on global sea turtle populations.

"Millions of tonnes of plastic debris is entering our world's oceans on a yearly basis," Dr Wilcox said.

"The model we've developed can be adapted to help us understand the impact of plastic ingestion not just on individuals, but whole populations of other endangered marine species as well.

"The better we understand the issue, the better equipped we are to address the problem, and work towards viable, scalable solutions." 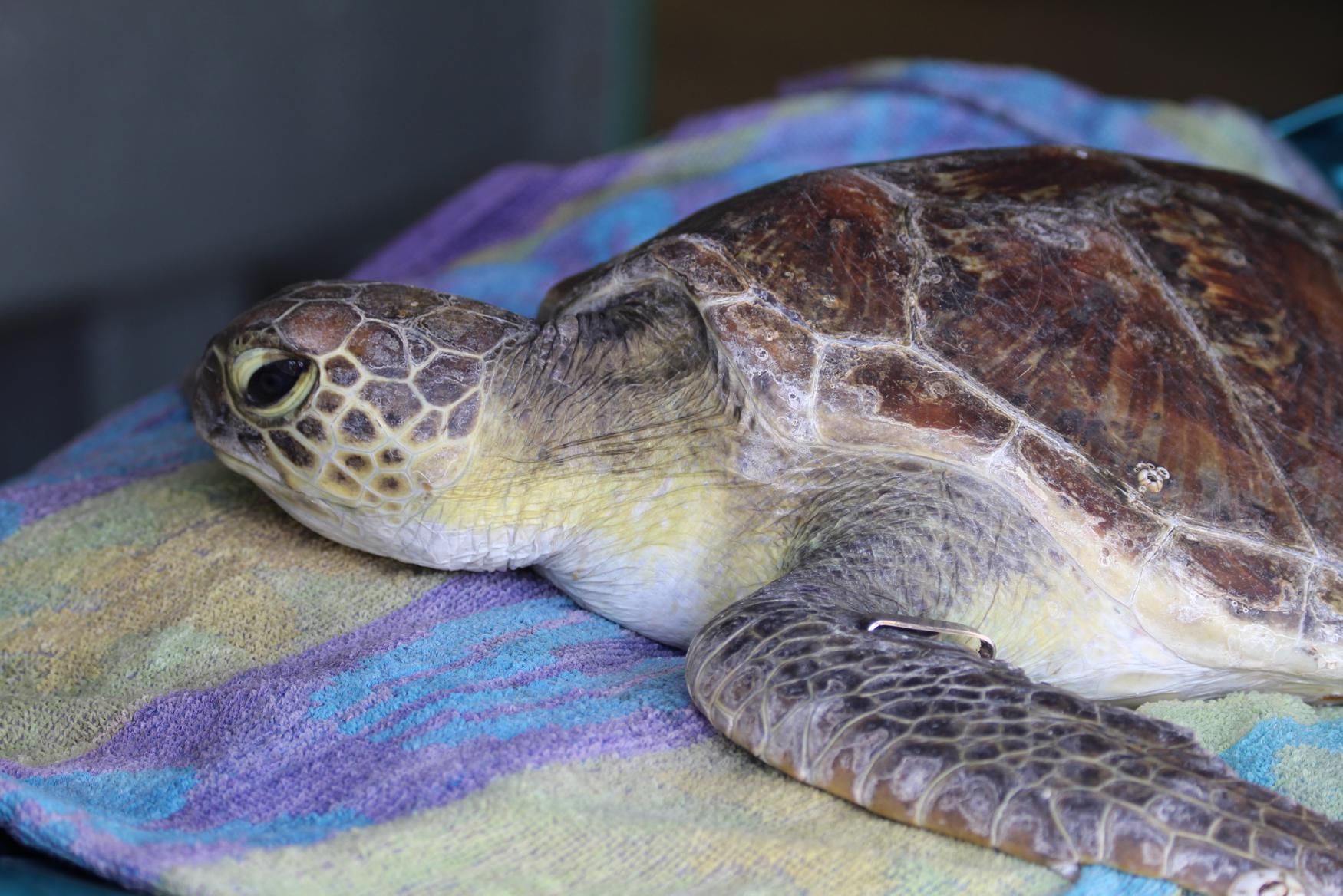 This emaciated juvenile green sea turtle was brought in for care, showing signs of having ingested plastic and other debris. Sea turtles have downward facing spines in their throat which prevents them from regurgitating, making them susceptible to gut impaction from ingested marine debris. Credit: Kathy Townsend, University of Sunshine Coast 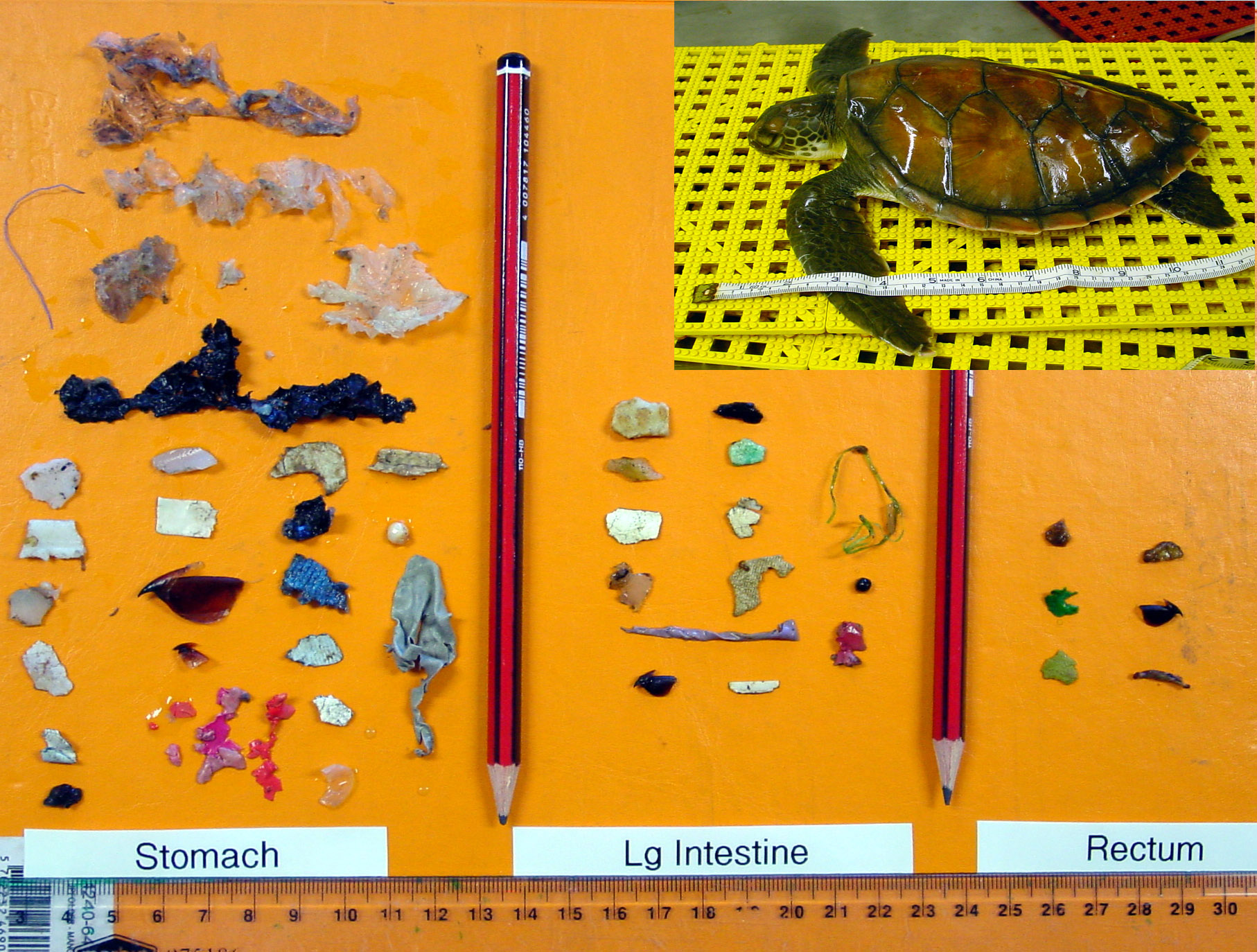 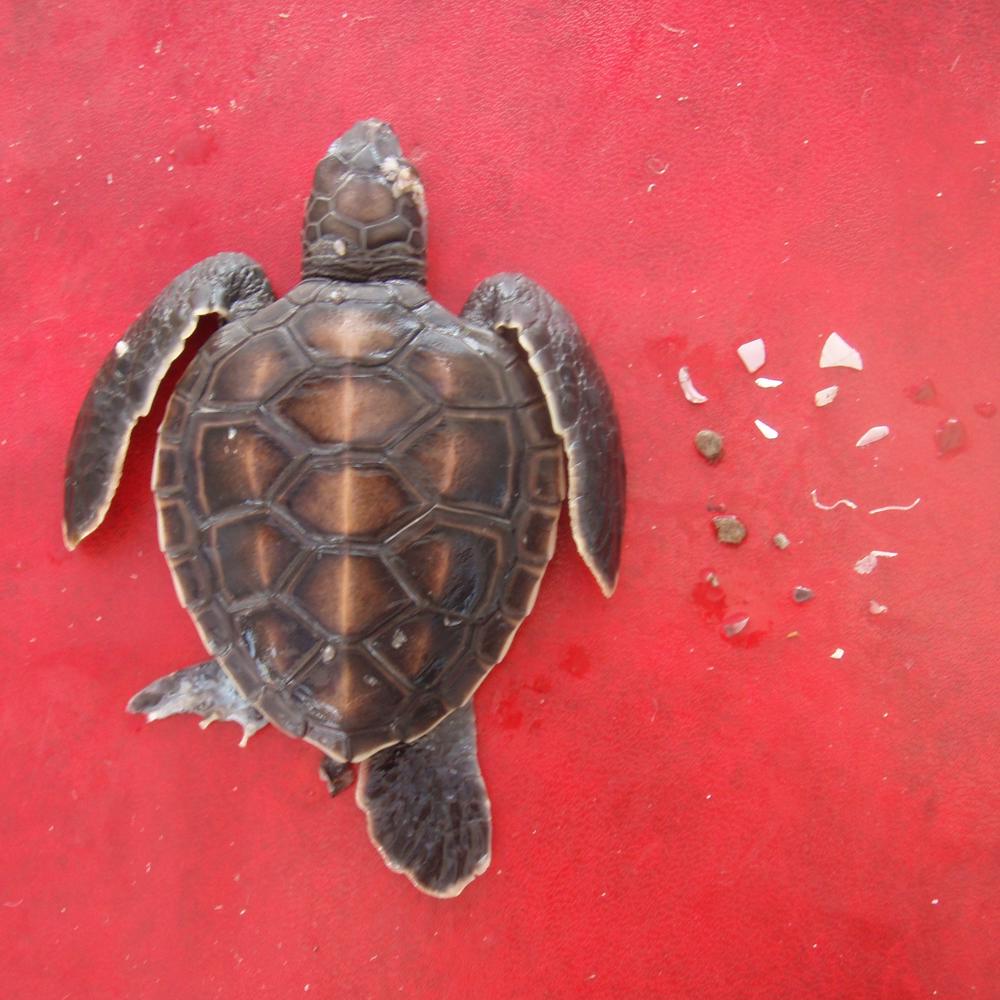 One of the first meals eaten by this sea turtle post-hatchling turned out to be deadly. It died from consuming over 20 tiny pieces of plastic, many of which were about the same size as a grain of rice. Credit: Kathy Townsend, University of Sunshine Coast 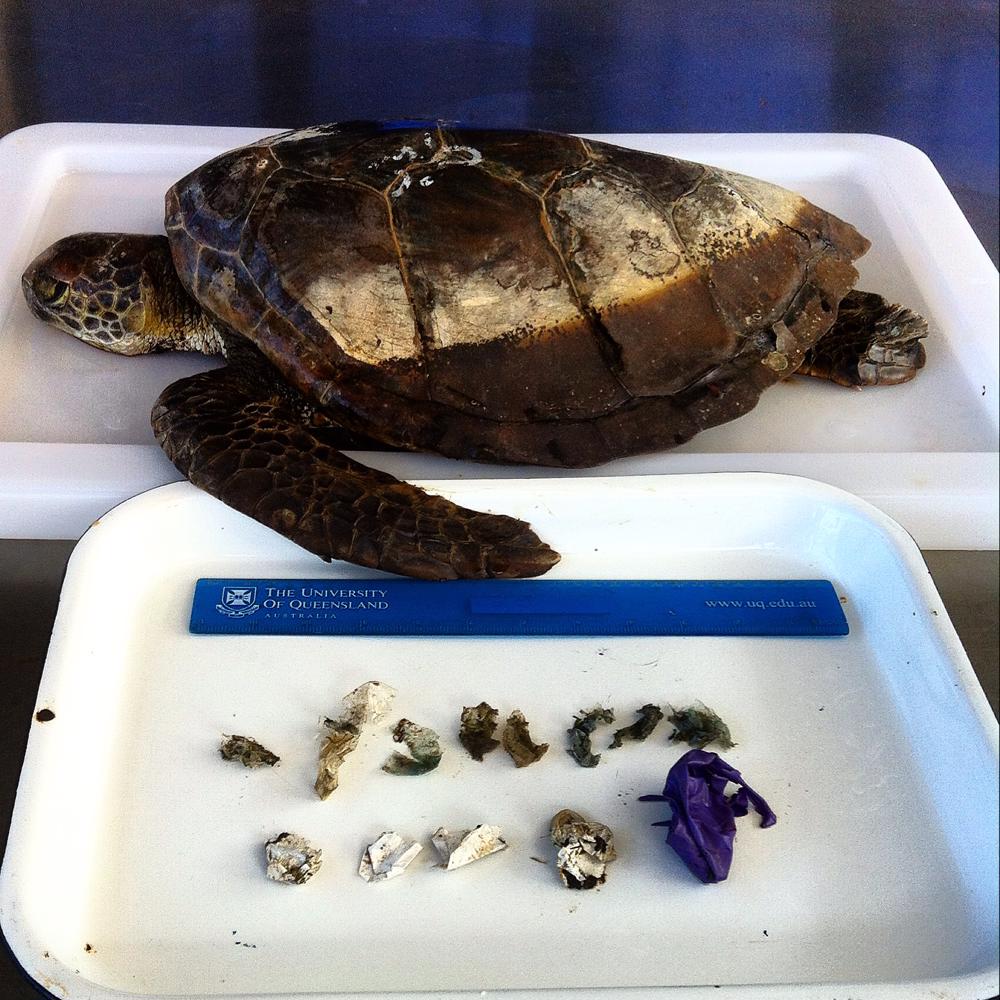 Plastic in the marine environment is a growing environmental issue. Sea turtles are at significant risk of ingesting plastic debris at all stages of their lifecycle with potentially lethal consequences. We tested the relationship between the amount of plastic a turtle has ingested and the likelihood of death, treating animals that died of known causes unrelated to plastic ingestion as a statistical control group. We utilized two datasets; one based on necropsies of 246 sea turtles and a second using 706 records extracted from a national strandings database. Animals dying of known causes unrelated to plastic ingestion had less plastic in their gut than those that died of either indeterminate causes or due to plastic ingestion directly (e.g. via gut impaction and perforation). We found a 50% probability of mortality once an animal had 14 pieces of plastic in its gut. Our results provide the critical link between recent estimates of plastic ingestion and the population effects of this environmental threat. *

* Full report available in open access at above link. 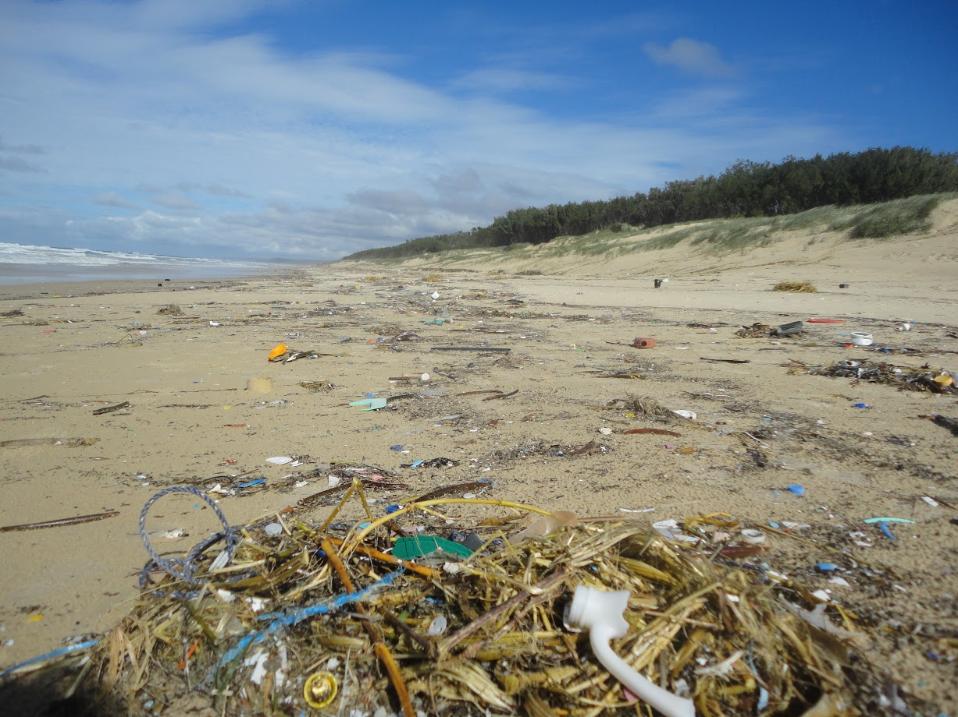 A mixture of plastic and pumice stone is pushed onto the back beach of North Stradbroke Island after strong north easterly winds. Some of just some of the 150 billion metric tonnes of plastic estimated to be in the world’s oceans. Credit: Emmie Willis

Approximately 61 percent of the world's 356 turtle species are threatened or already extinct, and the decline could have ecological consequences.

These findings are according to a paper in the journal BioScience synthesizing the global status of turtles and their ecological roles by scientists from the U.S. Geological Survey, Tennessee Aquarium Conservation Institute, University of California, Davis, and the University of Georgia.

Turtles are now among the most threatened groups of vertebrate animals on earth, more so than birds, mammals, fish or amphibians. These animals outlived the dinosaurs and have roamed the earth for more than 200 million years. Reasons for the decline of turtles worldwide include habitat destruction, over-exploitation for pets and food, disease and climate change.

"Our goal is to provide resource managers with a full picture of the state of these iconic animals worldwide, and what long-term impacts our environment might experience if populations continue to decrease and species loss continues," said USGS scientist and lead author of the study Jeffrey Lovich. "Turtles contribute to the health of many environments, including desert, wetland, freshwater and marine ecosystems, and their decline may lead to negative effects on other species, including humans, that may not be immediately apparent."

Scientists synthesized existing published studies to bring attention to the status of turtles and identify what may be lost from an ecological perspective if current trends hold and they continue to decline and disappear.

This paper provides the first major review of the various functional roles that large populations and diverse communities of turtles provide from an ecological perspective. This includes maintaining healthy food webs, dispersing seeds and creating habitats necessary for other species.

"Our purpose is to inform the public of the many critical ecological roles turtles perform on a global scale and bring awareness to the plight of these emblematic animals whose ancestors walked with the dinosaurs," said professor emeritus and senior ecologist Whit Gibbons, at the University of Georgia's Savannah River Ecology Laboratory and Odum School of Ecology. "These modern descendants of an ancient lineage are touchstones for how human influences are causing the decline of so much of the world's wildlife. Our hope is that everyone will be encouraged to engage in concerted efforts to conserve their well-earned legacy as part of our natural habitats." 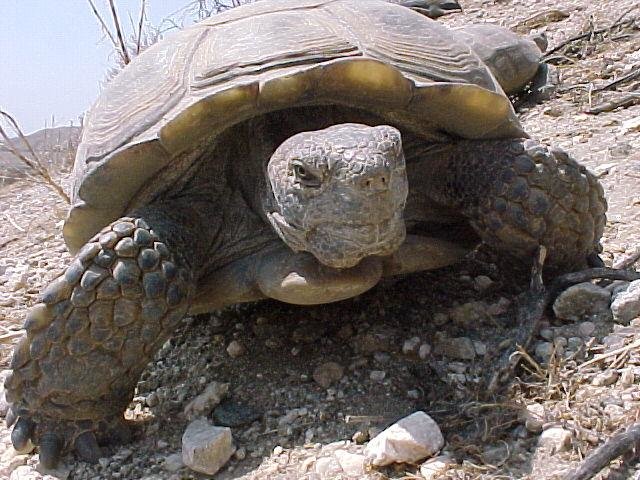 Turtles can be major players in ecosystem food webs because they can be herbivores, omnivores or carnivores. They range from specialists that feed on one to a few food sources, to generalists, feeding on a wide range of items. Their diverse feeding habits allow them to influence the structure of other communities in their habitat. Some turtle species occur in dense numbers that can yield hundreds of pounds of turtles per acre, making them ecologically important by virtue of their mass alone. Such large masses of turtles equate to large amounts of potential food for organisms that feed on turtles or their eggs.

Turtles can be important for dispersing the seeds of dozens of plant species. Some turtle species may even be the primary seed dispersal agents for specific plants. Not all seeds are destroyed by the digestive tract. In fact, there are specific seeds that exhibit higher rates of germination after being eaten and passed by turtles.

Some turtles, like Agassiz's desert tortoise in the American Southwest and the gopher tortoise in the American Southeast, dig deep burrows creating habitat for other species. For example, the gopher tortoise can dig burrows over 30 feet long. The mounds of soil near the entrance of the burrows can create new habitat for some plant species, increasing overall plant diversity near burrow entrances. The burrows are used by hundreds of other species including spiders, insects, snakes, amphibians, other reptiles, rabbits, foxes and even bobcats.

"The ecological importance of turtles, especially freshwater turtles, is underappreciated, and they are generally understudied by ecologists," says Josh Ennen, research scientist at the Tennessee Aquarium Conservation Institute. "The alarming rate of turtle disappearance could profoundly affect how ecosystems function as well as the structure of biological communities around the globe."

"We must take the time to understand turtles, their natural history, and their importance to the environment, or risk losing them to a new reality where they don't exist," said UC Davis scientist Mickey Agha. "Referred to as a shifting baseline, people born into a world without large numbers of long-lived reptiles, such as turtles, may accept that as the new norm."

Jeffrey E Lovich, Joshua R Ennen, Mickey Agha, J Whitfield Gibbons. Where Have All the Turtles Gone, and Why Does It Matter? BioScience, 2018; DOI: 10.1093/biosci/biy095