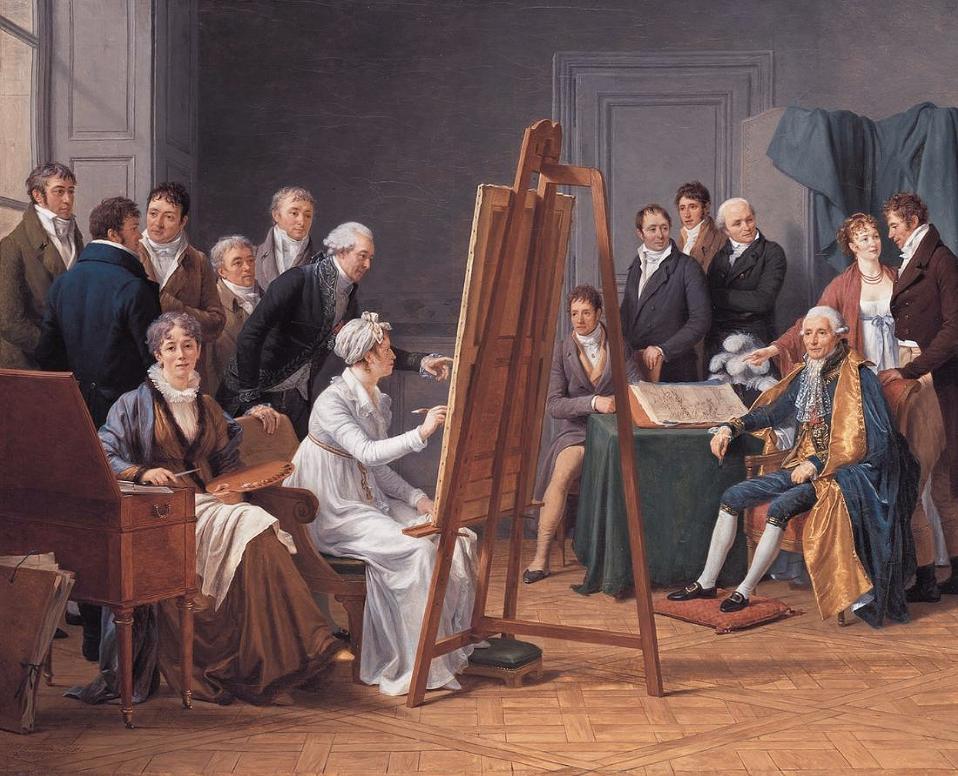 In this The Conversation series, we look at under acknowledged women through the ages.

Born in 1749, Adélaïde Labille-Guiard was a supremely talented painter who forged her career at a time when the Parisian art world was dominated by aristocratic and male institutions and networks.

She was independent and resolute in the face of hostility from some of her male rivals, and successfully manoeuvred through the deadly twists of the French Revolution. Her portraits of prominent men and women in the revolutionary period of 1780-1800 are of unusual quality and breadth.

Adélaïde was one of eight children in the Labille family of haberdashers. Like many other women far distant from the pinnacle of high art, the Académie Royale de Peinture et de Sculpture, she made her way through artists’ studios and the Académie de Saint-Luc, a painters’ guild formed in Paris in 1391.

There she polished her craft as she moved from miniatures to full portraits and from pastels to oils. Of critical importance as a teacher was the well-connected and decorated François-Élie Vincent, as was the friendship of his artist son François-André. 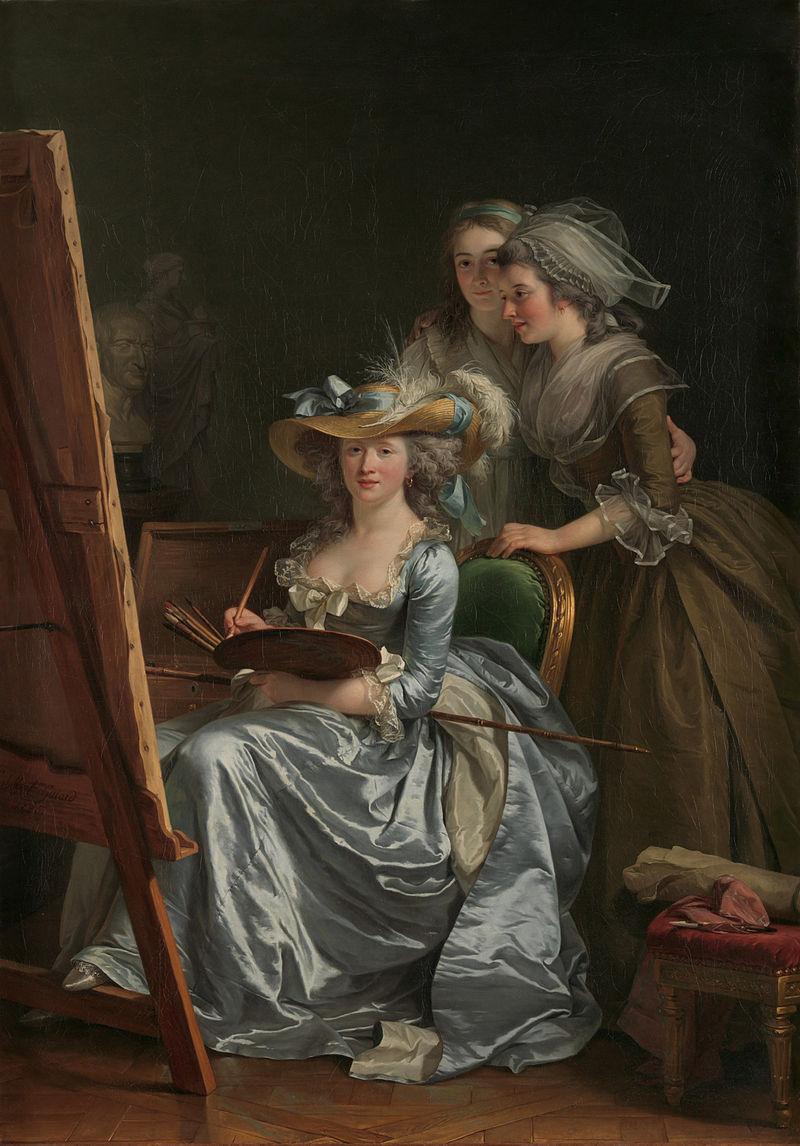 In 1783, after intervention from Queen Marie-Antoinette, Adélaïde was finally admitted into the Académie Royale, at the same session as another brilliant, younger woman, Élisabeth Vigée-Le Brun (born 1755). They were two of only a dozen women admitted since 1648. Over the next six years the two of them would become wealthy, sought-after painters of the royal family and members of its court at Versailles.

Labille-Guiard experimented with using matt backgrounds to her exquisite portraits, often eschewing the common practice of surrounding sitters with symbols of their status.

The two women were receiving fees of tens of thousands of livres for each portrait at a time when most priests, for example, were paid about one thousand annually. Vigée-Le Brun was the Queen’s favourite, painting her 30 times; instead Labille-Guiard painted King Louis XVI’s aunts, but her best portraits were of an unknown woman, her friend Vincent, and a self-portrait with her prize pupil and close friend Marie Capet. 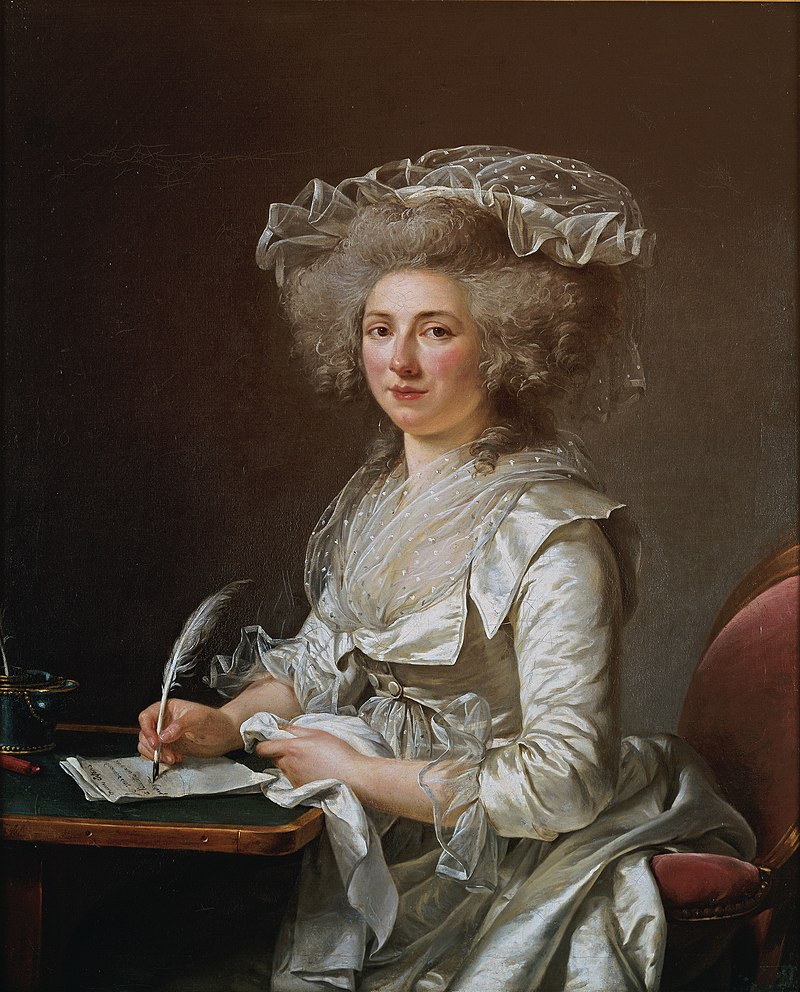 Portrait of a woman thought to be Madame Roland painted by Adélaïde Labille-Guiard in 1787.  Wikimedia Commons 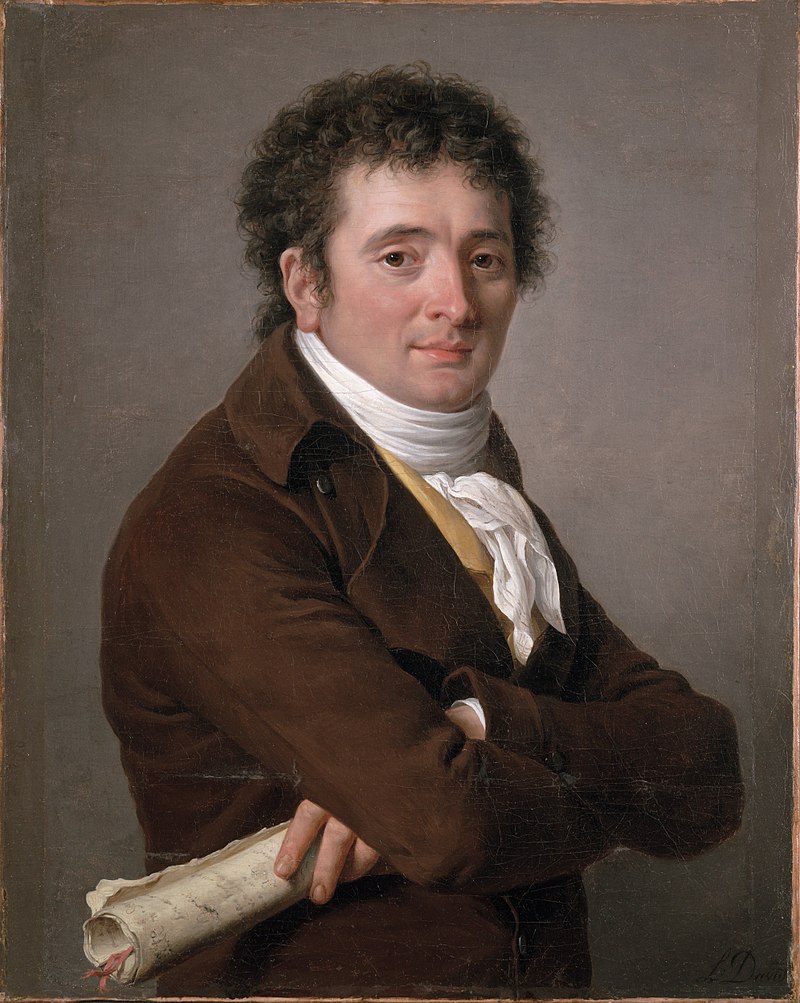 Like so many talented women in the creative arts before and since, Labille-Guiard suffered from snide allegations that she could not be capable of such brilliance. An anonymous poem of 1783 attacked her in sexual terms:

‘François-André Vincent touches up this woman … His love makes your talent. Love dies and talent falls.’ She had supposedly had 2000 lovers: ‘vingt cents [a play on Vincent’s name], or 2,000, it’s all the same’.

The independent and strong-willed Labille-Guiard was outraged:

One must expect to have one’s talent ripped apart … it’s the fate of all those who expose themselves to public judgment, but their works, their paintings, are there to defend them, if they are good they plead their cause. But who can plead on behalf of women’s morals?

In the summer of 1789 the opulent, privileged world of Labille-Guiard – and of all those at Versailles – fell apart, as Louis XVI and his ministers mismanaged a deep financial crisis.

The commoner delegates to an advisory assembly – the Estates-General – effectively seized the political initiative in June 1789, proclaiming themselves the National Assembly, and were supported by waves of revolutionary action in Paris and the provinces. What was previously thought the most stable and confident absolutist regime in Europe was replaced by constitutional government based on the Declaration of the Rights of Man and the Citizen.

She welcomed the revolution

Unlike the royalist Vigée-Le Brun, who fled from revolutionary France to Italy in disgust in October 1789, Labille-Guiard welcomed the Revolution and with others made substantial “patriotic donations” to support the reformist work of the Assembly.

She continued to paint vigorously, from portraits of Madame de Genlis, the governess of the children of the royal family, to the most uncompromising of the revolutionary Jacobins, such as Maximilien Robespierre, whose portrait was one of 14 politicians she painted for the Salon of 1791. 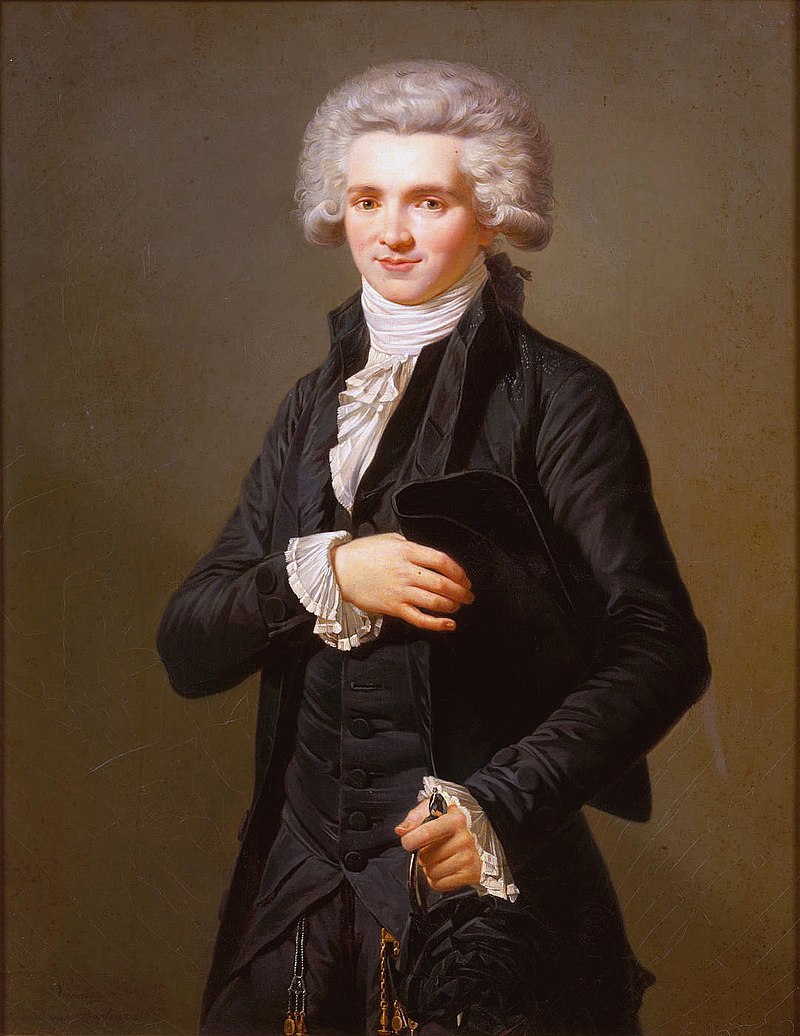 But Labille-Guiard was vulnerable. How could a court painter, the favourite of the king’s aunts, be trusted? Her rival Jean-Bernard Restout attacked her in 1791, mocking her sarcastically for doing “the arts the service of giving us the portraits of Mesdames the king’s aunts … and which would only cost the people 60 or 80 thousand francs.”

Men from the studio of the most powerful figure in the art world, the Jacobin revolutionary Jacques-Louis David, went further:

The rewards destined for artists cannot be without danger for women [since art requires] long and hard study … incompatible with the modest virtues of their sex.

The roles of “mother and wife are more precious for them and for society than their success in the arts … Strong in their virtues, justly respected, they will inspire their husbands and their children to love and serve the nation.” The reformed Academy in 1793 would exclude women altogether.

Once war with Europe broke out in April 1792, and the constitutional monarchy was overthrown by a new revolution in August, Labille-Guiard’s personal safety was at greater risk. Could her republican affirmations protect her from popular suspicion of all former courtiers? Her dreams of establishing a school for women artists were dashed and, with François-André Vincent and Marie Capet, she fled the capital for the village of Pontault, 20km to the east.

There she kept her head down during the great revolutionary crisis of “the Terror” in 1793-94, saying nothing when told her earlier portrait of Louis XVI’s brother, the émigré Comte de Provence, was to be destroyed and her fee of 30,000 livres left unpaid.

However, she used the Revolution’s 1793 marriage reforms to divorce her husband, Louis Guiard, a clerk she had married at age 20 but from whom she had separated in 1777.

After the revolution ended

Labille-Guiard was lucky to survive. Once “the Terror” was over in 1795, she re-emerged and was granted a modest state pension. She began producing brilliant portraits again, this time of revolutionary administrators, dramatists and her partner Vincent, whom she married in 1799. 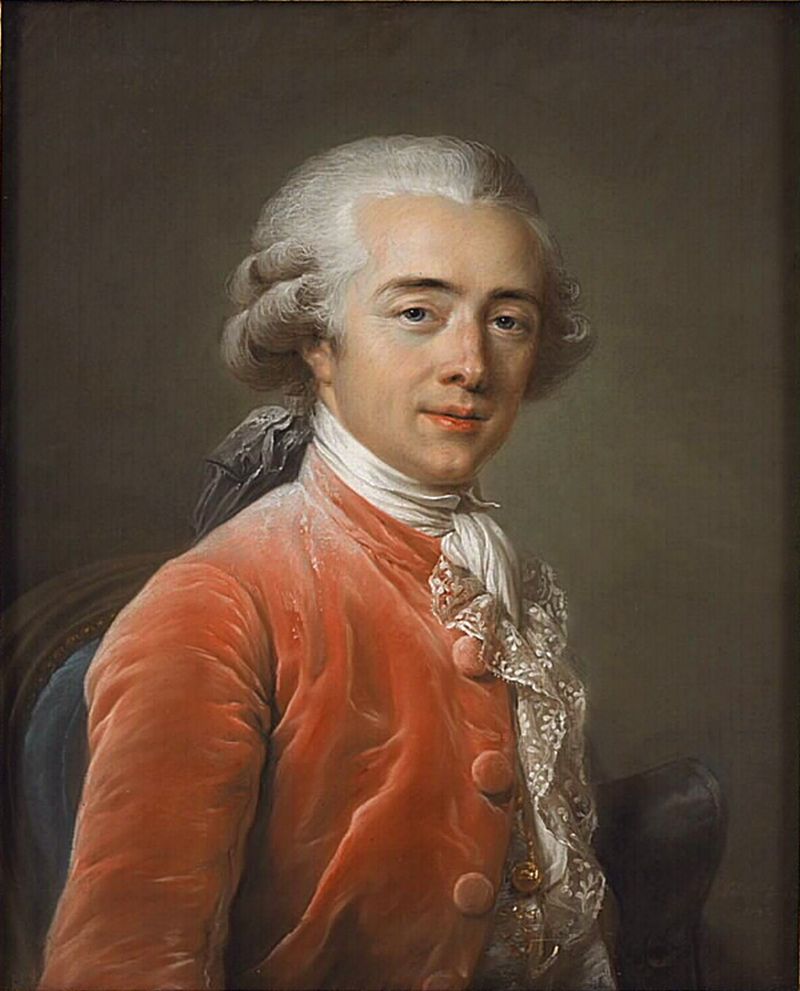 She and Capet re-established their atelier, the first set aside for a woman in the Louvre and depicted in a later study by Capet.

She did not live long, dying in 1803, soon after her old rival Vigée-Le Brun returned bitter and rancorous from 13 years of exile painting in the counter-revolutionary courts of Europe.

Unlike Vigée-Le Brun, the subject of four biographies in the last 20 years and major recent exhibitions in Paris, Ottawa and New York, Labille-Guiard has rarely been celebrated. A superb study of her by Laura Auricchio in 2009, only the third since her death, was a step towards recognition of a prodigious talent expressed in revolutionary times. 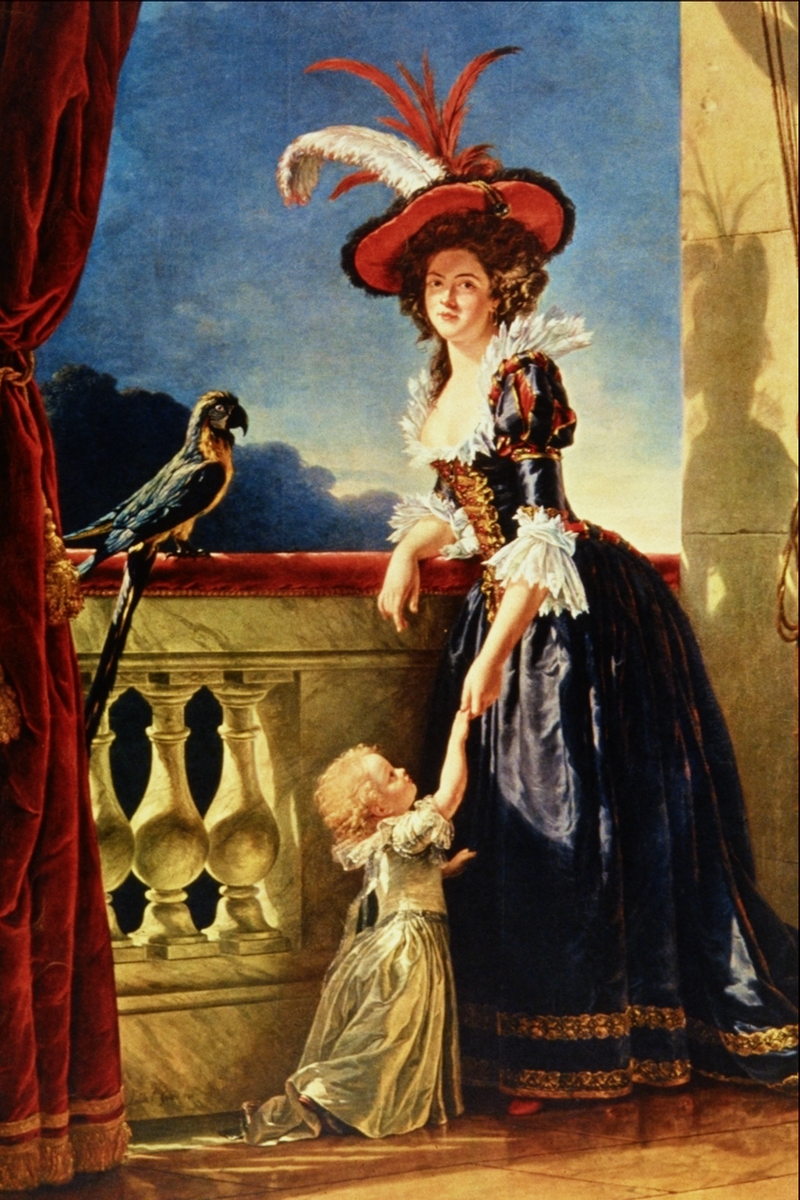 Portrait of Louise-Elisabeth of France with her son, 1788, by Adélaïde Labille-Guiard

The portrait of Madame Louise-Elisabeth of France, Infante d'Espagne, Duchesse de Parme, was commissioned by King Louis XVI's aunts and it shows one of the daughters of Louis XV with her son. The shadows on her face and on the wall in back of her may symbolise death, in fact she died of a smallpox at the age thirty-two. Completed in 1788, one year after the commission, the picture idealises its subject, who stands on a terrace in a relaxed, graceful pose, dressed in the low-cut and elaborately decorated costume popular in late eighteen-century.