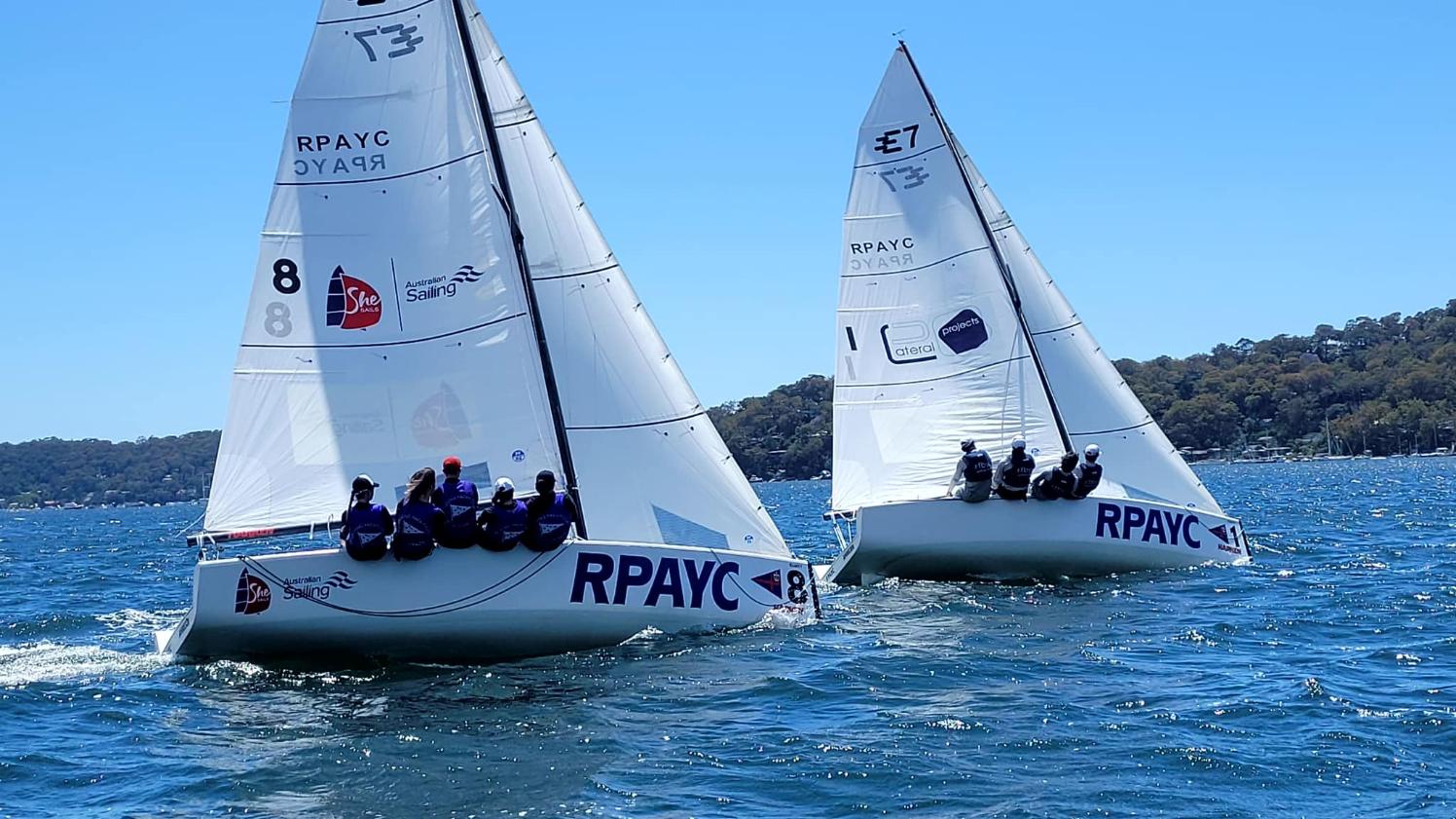 The 2022 Harken International Youth Match Racing Championship hosts the World’s best youth match racing talent, with competitors coming from across the globe including America, New Zealand, New Caledonia and a strong representation from across Australia. After a two-year absence from the International racing circuit, the Championship is shaping up to be the most hotly contested youth match racing event this year.

This year’s event is being managed by one of Australia’s best Match Racing Officials Team including a superb International and local line-up of Umpires.

With the host Club the Royal Prince Alfred Yacht Club (RPAYC) receiving over 30 applicants this year it was a hard decision for the events management committee in selecting the 10 teams to compete. The teams selected sees a new generation of sailors participate together with a number of teams looking to etch their names into the Rockin’ Robin Perpetual Trophy joining a growing list of the world’s top sailors.

Priesto-Low and his team are seasoned Matched Racers who won the JESS Match Cup earlier this year.

Prieto-Low is closely followed by RFBYC representative Marcello Torre, with a ranking of 187 reflecting his recent competition at the Governor’s Cup where he finished 9th in the Grade 2 event.

Across the ditch is growing talent Josh Hyde from the Royal New Zealand Yacht Squadron ranked 331 off the back of the Harken New Zealand Match Racing Nationals where he placed 3rd. Hyde has been steadily increasing his ranking over the year competing in numerous local open Match Racing Events.

Closer to home and one team to watch is Chelsea Williams representing the Cruising Yacht Club Australia and having recently returned from competing in the Women’s Open Worlds Match Racing Championship held in Auckland where her team placed 11th.

Grant Pellew, Harken Managing Director Australasia has wished good luck to all competitors in the lead-up to the event. ‘Harken is proud of our involvement in this international event over the past 25 years, we believe youth sailing is one of the most important forms of our sport. We are heavily committed to youth sailing both here and overseas. The Harken family wish everyone taking part the best of luck in the regatta, may the best team win.’ – Grant Pellew, HARKEN Managing Director Australasia.

Results will be added in when received.

The lead up days racing, as reported and photographed by the great team at RPAYC, runs below. 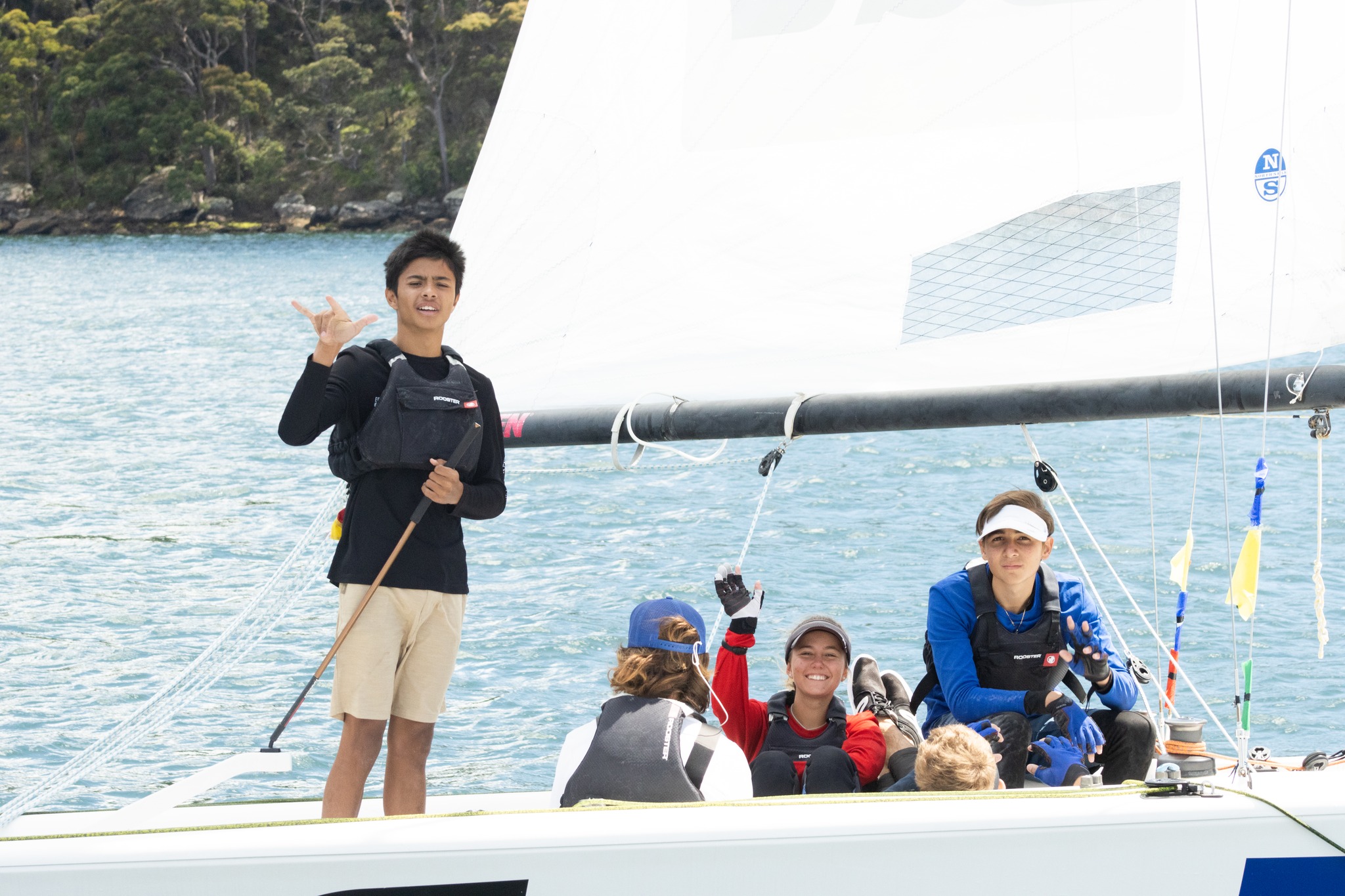 Day 1 of the Harken International Youth Match Racing Championship started the morning off as if it was a winter blizzard, not mid Summer. “Back home its 35 degrees today, we never get this type of weather,” said Feliphe Minier, Coach of the New Caledonia’s Cercle Nautique Calédonien  Team.

Racing got underway on time with a 12-18knt SSE breeze already set in for the day. A with few puffs of 20knts catching some Teams off guard as they tussled towards the windward mark.

With boats sprinting downwind in the conditions, some skippers clearly had remembered the morning briefing reminders on boat damages and were noticeably applying the breaks at the bottom mark roundings to avoid giving their competitors a potential nudge.

No teams have managed to hold on to a perfect score result with tight racing across the competition for the day.

8 Flights, 32 Matches a great day on Pittwater and everything to play for tomorrow. 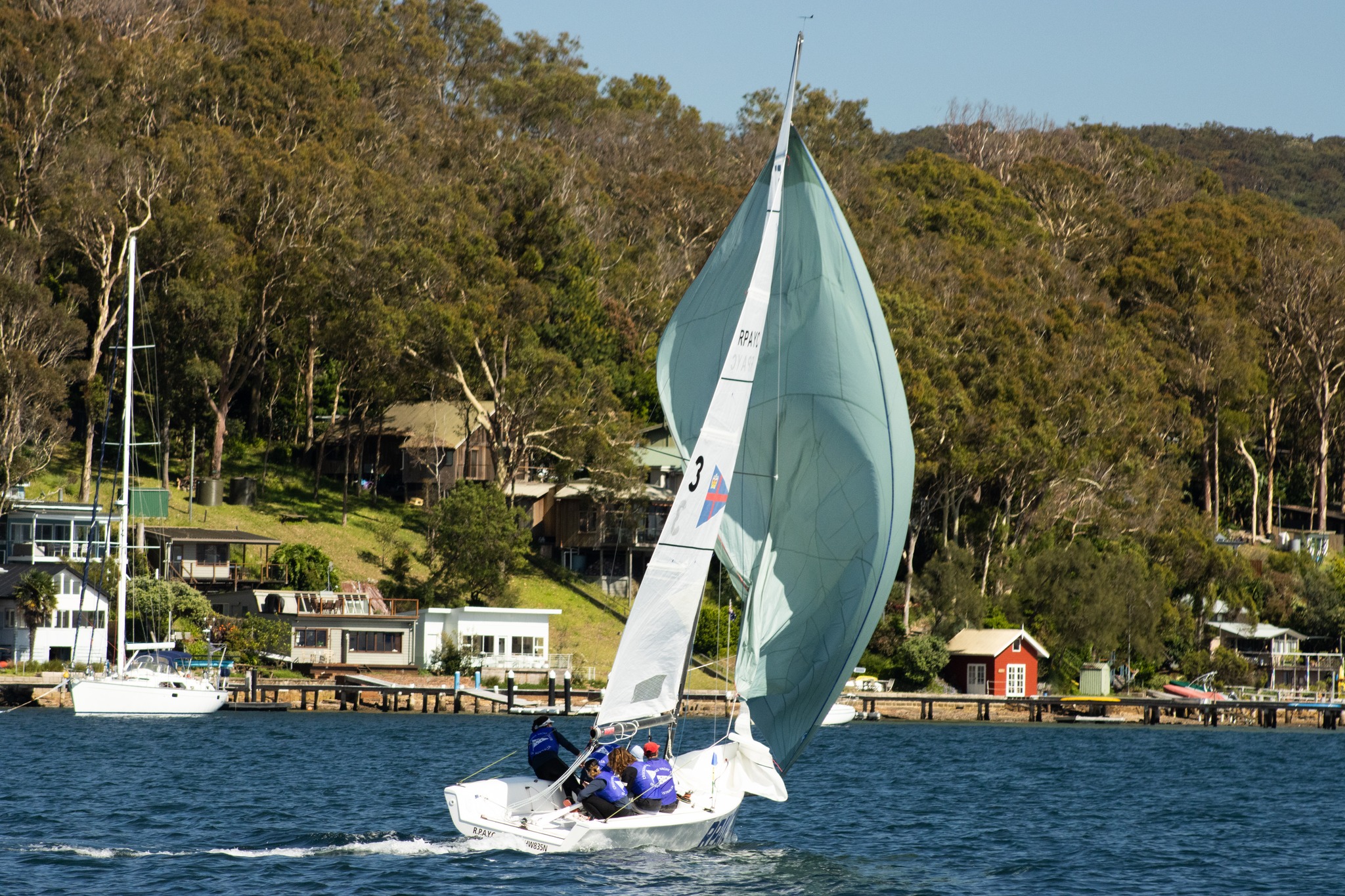 Day 2 of the Harken International Youth Match Racing Championship 2022. Race Officer Ted Anderson was certainly pleased to get racing underway on time with a building 8-15knt, SSE breeze, but, amazingly, the day’s racing ended with a BLACK FLAG, in the very last Match of the day.

As it currently stands at the end of Day 2, it is Ethan Prieto-Low and Max Brennan that are shaping up to be the hot contenders for the finals, but they have a challenge ahead of them, with the in-form Max Paul and Josh Hyde, both displaying outstanding boat skills today on the water too. Day 3 will clearly need all teams to be at the top of their game, to ensure they will be in contention for the finals.

However, as the day closed out and on the other side of the draw, it was an unfortunately tough day for Brayden Hamilton (RNZYS), as he was issued with a BLACK FLAG, which equated to a double penalty prior to the start, not being cleared. He’ll have to reflect on that one, shake it off, then front up again tomorrow.

Apart for the drama at the end, it was another sensational day of racing with beautiful conditions. 37 matches were chalked up, to have a large portion of the double Round Robin nearly completed, as the second day of racing wrapped.

Ending the day’s racing saw the youngest of the Kemp brothers, Daniel Kemp (RPAYC) beat Kevin Le Dréau (CNC), to have 8 wins from his 14 matches.

As the twilight sun appears over Pittwater, the teams have a well-earned meal awaiting them, alongside the Umpires and Race Officials, back at the Club on the sun drenched terrace.

It was another truly massive day of persistence from Race Officer Ted Anderson and his team, plus, Ben Fels and his team of Umpires too. All credit as well to the competitors, for swift change-overs to keeping things rolling, plus racing seriously hard but fair.

Racing will again commence from 1000hrs tomorrow, Saturday 19th November, with the weather forecast looking to provide a solid N’ Easterly of about 10-15kts, which will likely see the completion of Round Robin 2. 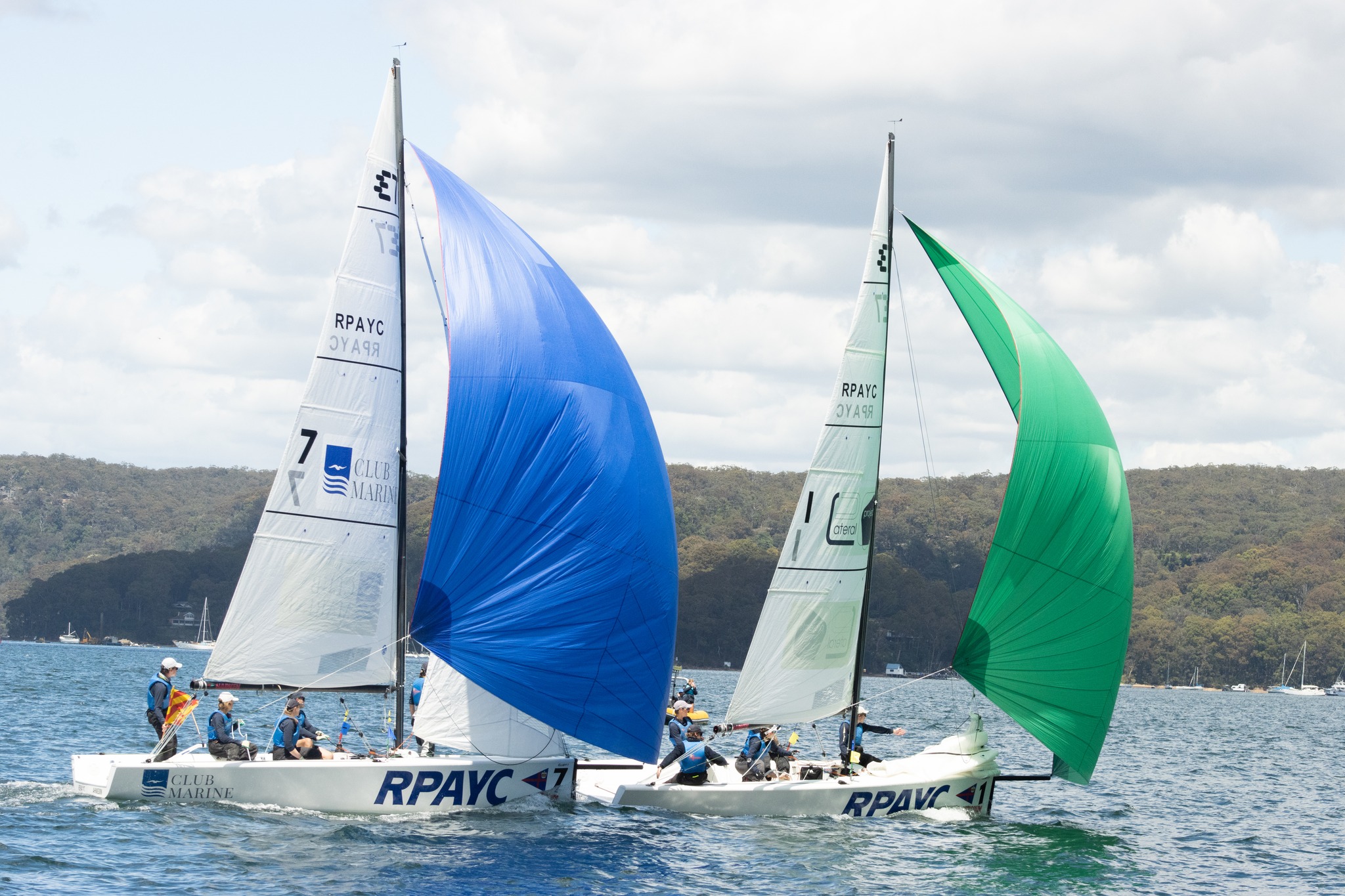 The day on Pittwater provided sparkling conditions and a perfect building north-easterly breeze for competitors and the race management team.

It’s shaping up to be the battle of two Countries, USA and Australia.

Round Robin 2 was completed just after midday with skippers joining the Starting Committee Vessel to for the semi final boat draw.

After 2 round robins the rankings are as follows:

Brennan, Paul, and Prieto-Low continued to assert their dominance over the other Teams, with a great display of tactics and boat handling. In the game of chess that is the start, they were a move or two ahead of their rivals each time.

With the Round Robin Series so tight fourth and fifth was decided by who beat who in the Series. The other noticeable battle that has been raging is that of local RPAYC skippers the ‘Kemp Brothers’. D’Arcy Kemp coming out on top as he scored one over his younger brother Daniel in each of the Round Robin Series.

Results at the close Day 3 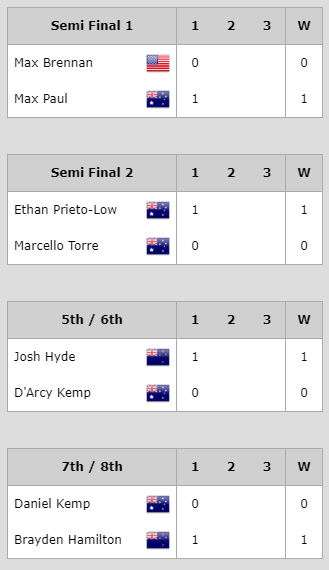 At the closing stages of the day the wind freshened up substantially reaching 17.7kts. As the final matches run their course, and at 1500hrs the race committee displayed AP over A sending competitors back to the club house.

Sunday’s racing will certainly be interesting as Pittwater throws a moderate to fresh Westerly and the temperature is forecast to rise matching the  provides hot action. 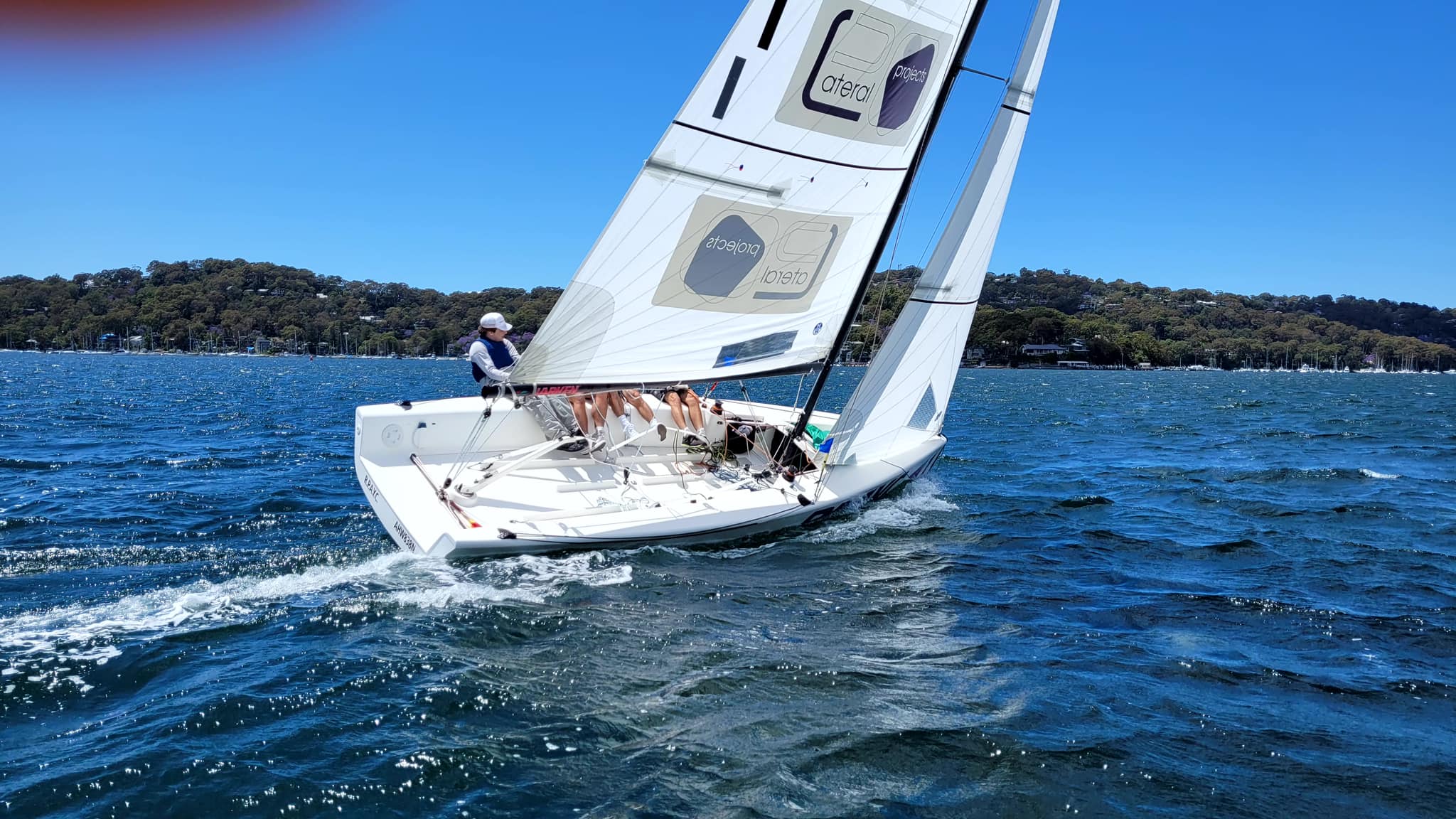 For the first time in 30yrs of the event, racing was Abandoned late in the afternoon on the final day before any racing took place due to weather conditions in Pittwater. As a result, the final placings were based on the team's Round Robin results and placings in the Semifinals, which saw Ethan Prieto-Low from Royal Freshwater Bay Yacht Club crowned the 2022 Winner! A well-deserved win. 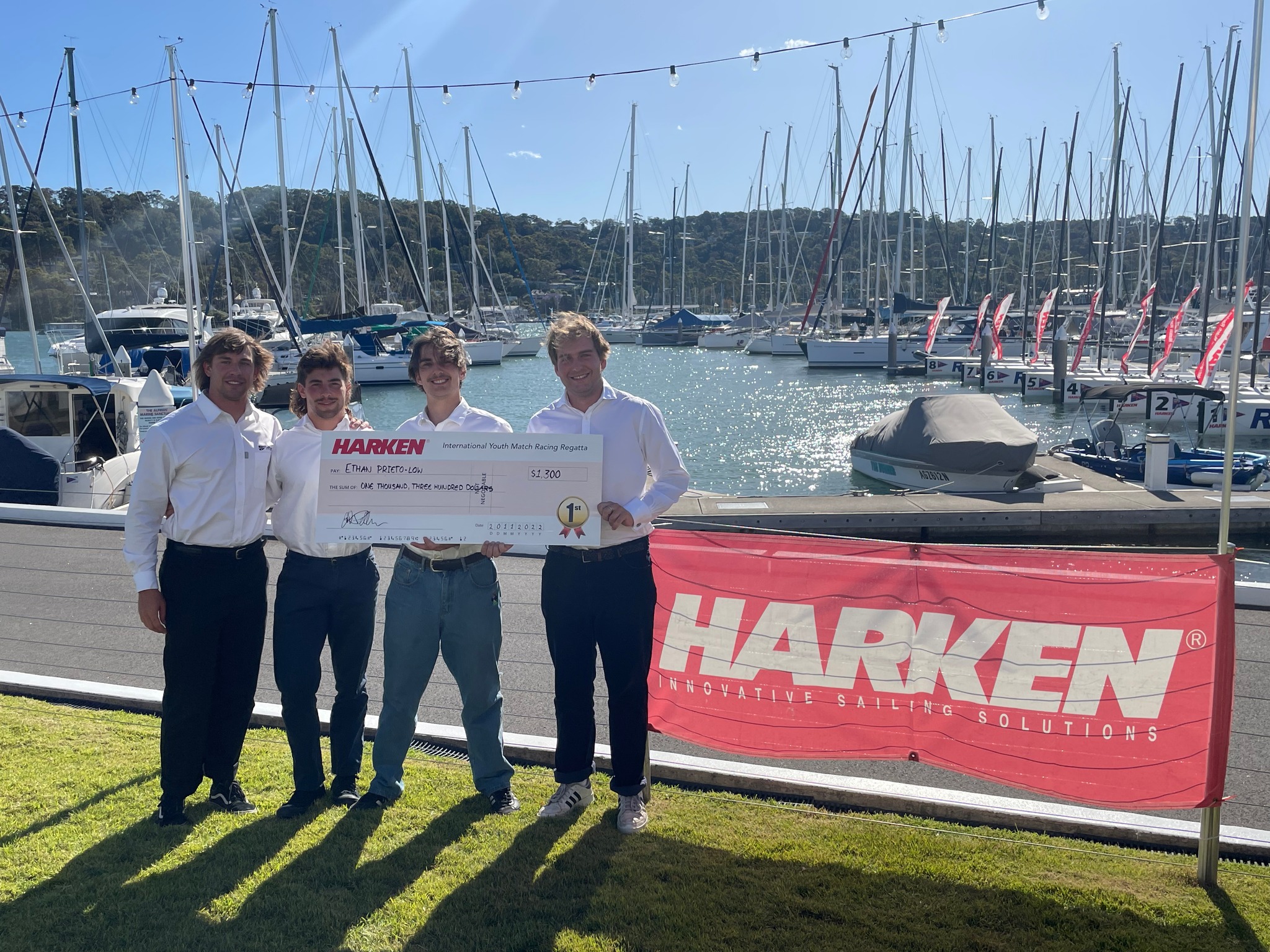 What would have seen teams pushing their limit to outsail each other on Sunday was never to be as a 'crazy day', with wind gusts up to 33 knots; that's sailing where mother nature rules in the end.

Even with the last day not going to plan, teams had a great opportunity to socialise and enjoy the downtime on Pittwater. For some teams, they only have a day's rest before their next event on Sydney Harbour.

The Championship had seen ideal racing conditions on Pittwater leading into the final day of racing. As predicted though, Pittwater was frothing and choppy come Sunday, as the wicked wind from the West, blasted across the 'Big Pond' with gusts of up to 27knts and averaging a solid 21knots.

The race committee vessel displayed 'AP' as the fleet sheltered under the lee of Longnose Point as they reassessed racing in the morning. “We’re in for a bit of a wait…” said this week's Race Officer Ted Anderson. But as the day drew on and conditions suitable for racing on Pittwater grew a distance reality the decision was made to abandon racing for the Championship with Anderson and chief umpire Fels left to do the sums to announce the winner at the Presentation.

First, second and third place took home match racing points plus a well-earnt bundle of cash each, thanks to the event's naming rights sponsor of 26 years, Harken Australia.

"You guys have been written into the event's history books and Harken is proud to be a part of it," Grant Pellew, Managing Director of Australasia said at the awards presentation. "There are a lot of top youth teams who come to this event but it's also about those youth teams who aren't ranked, but who get the chance to learn from the others, and maybe make it to the top one day."

The 'Umpires' Award is new for 2022 and presented by the Chief Umpire and this is awarded for 2022 for the youngest skipper and team - Kevin Le dreau from CNC (FRA) taking home $400 in prize money.

The Harken's striking perpetual Rockin' Robin Trophy was originally donated to by Robyn Wiltshire-Newman. It is named after a crew of young Australian men, including her husband and son plus other club members, who along with their boat Rockin' Robin were tragically lost at sea back in 1990 en route to Fiji.

Ethan Prieto-Low joins a long list of past Harken winners engraved on the trophy, some of whom have gone on to represent their countries and sailing at the highest levels.

Host club the RPAYC looks forward to celebrating 30yrs of its Youth Development Program in 2023. A specific training program for youth aged between 15-23yrs of age that develops sailors' skills, team building, friendships, rules knowledge, and enjoyment of sailing in a multitude of events around the world. Find out more at https://rpayc.com.au/courses/youth-development/