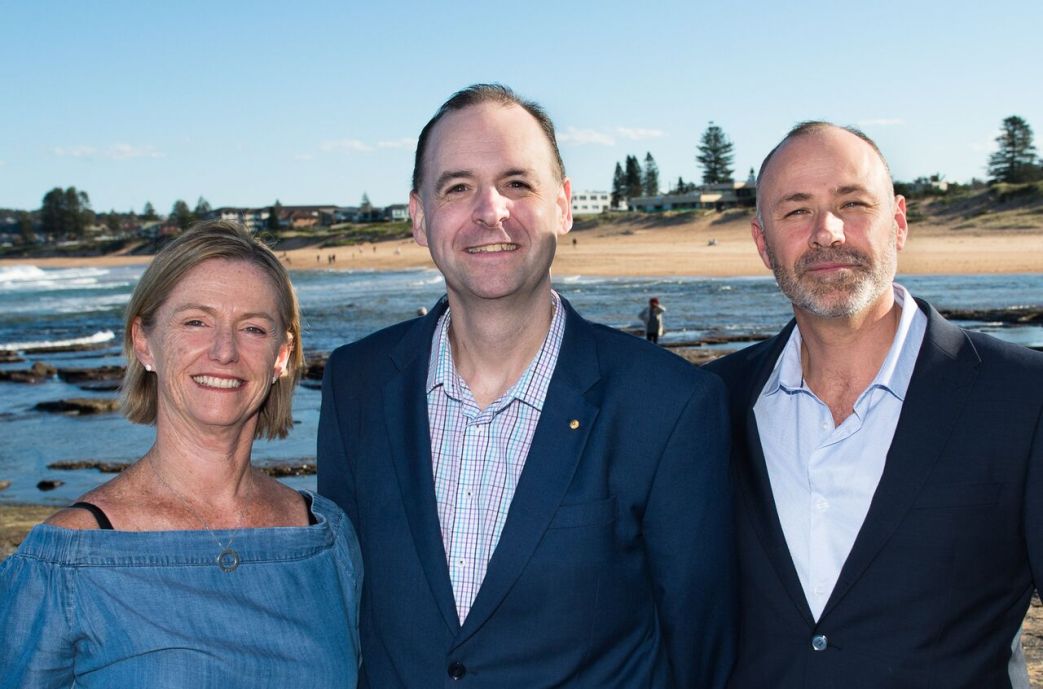 In recognition of his outstanding voluntary service to youth welfare, charitable and sporting organisations in 2004 he was named in the Queen’s Birthday Honours List and awarded the Order of Australia (OAM).

He has been admitted as a Solicitor of the Supreme Court of NSW, and is a Bachelor of Arts and Bachelor of Laws and holds a Graduate Diploma in Legal Practice and previously was an officer in the NSW Attorney General’s Department.
He served as an Independent Councillor on Warringah Council from 2008 – 2016.  In the last term of Council, he was the only true Independent on the Council and only Councillor not a member of any Registered Political Party.
Tony Biasi
Tony has grown up on the Northern Beaches, attended St Pauls College Manly and was a Student Leader.  He is married to Lucia, who was born and bred on the Northern Beaches, and is the father of five children.
Through his own personal participation and that of his children, he has been actively involved in local Rugby League, Junior Rugby Union, Little Athletics, Futsal and Soccer.  During this time he has developed a passion for promoting and serving the Northern Beaches Community. Tony served for several years as President of St Paul’s College, Manly Parents and Friends Association.

Tony is a prominent local Small Business Owner and knows the issues confronting Small Businesses and is determined to ensure a Council that cares about Small Business.  One of his businesses, Tony’s Barbershop in Dee Why, has been established for over 40 years and was founded by his father and has spanned over three generations.  Tony also provides and promotes personal development coaching and workshops through another family run business “Perfect Unison” Mind Body Spirit Centre in Curl Curl.

Tony is extensively involved with and has been an active contributor to several charities, predominately “The Dare The Boss Campaign” to help cure childhood cancer.
Tony is a person of the highest integrity and places ethical principles at the forefront of all he does.

He is focussed on ensuring governance and leadership, with a grass roots understanding, knowledge and experience as a Northern Beaches local.  Tony also aims to achieve results and resolve issues through collaboration and engaging the opinions of the residents he is representing and will best serve the Northern Beaches community as a whole. Tony will aim to assist in areas that greatly impact the Northern Beaches community including promoting community services, youth development programs, continued improvement to sporting programmes and facilities, parking facilities, infrastructure and services for rate payers, residents and local businesses.

Tammy Cook
Tammy, lives in Cromer and is a full time working Mum of with two kids aged 15 and 14 and is currently employed as Commercial Officer.  She holds a Bachelor of Commerce and is a Fellow Member of the Institute of Public Accountants (IPA).
For many years she has been extensively involved with community and sporting group and has been a member of Narrabeen Beach Surf Life Saving Club since 2007 where she has served as Director of Youth & Membership Development 2010-2013, Director of Finance and Administration 2013-2015, currently Administration Support since 2016, has been Co-Ordinator of Narra Water Rats Youth Program since 2013, and is a current patrolling member.   Tammy is a member of Sydney Northern Beaches Branch Education Committee as Youth Advisor since 2016, and is also a member of Sydney Northern Beaches Branch’s Judiciary Committee.

Tammy currently plays for Beacon Hill Netball Club, is the former Hon Secretary of Cromer Netball Club 2010 and was Coach of Collaroy Plateau Netball Club’s junior teams during the 2011-2012 seasons.  She is involved with summer soccer (small sided format) at Rat Park Narrabeen, and was a Team Manager for Cromer Cricket Club.  She helps out at Dee Why Rugby Club, wherever she can (BBQ and Canteen duty) where she hears first hand the problems confronting Northern Beaches families and our community, particularly youth.

Tammy loves community service and with her professional qualifications and experience will be able to be a strong voice for residents to protect their interests and ensure proper financial accountability and transparency of rate-payers money.
Tweet