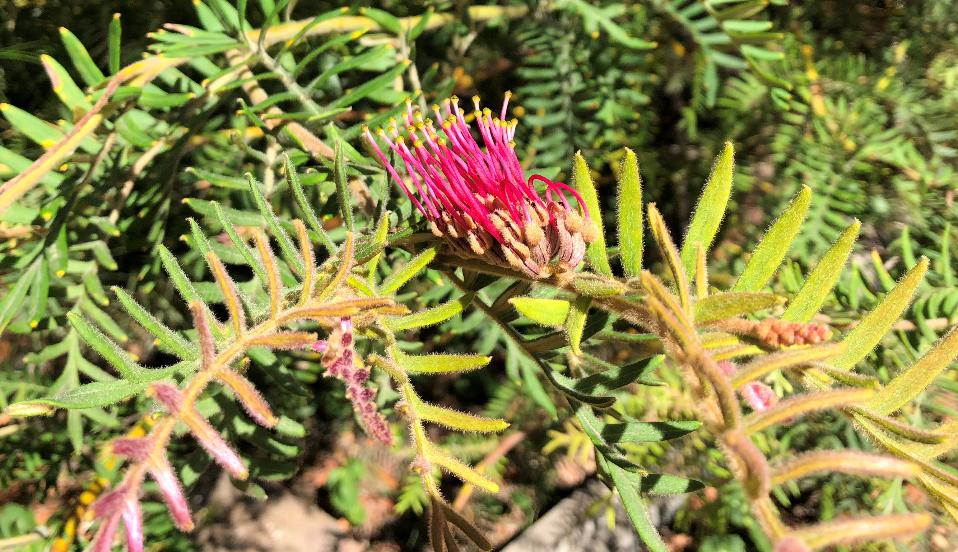 In a sacred patch of bushland on a ridge at Ingleside, a group of volunteers have been working for more than five years to save a plant so rare that the only place it grows is an eight-kilometre square around Terrey Hills. The plant, with deep pink brush-like flowers, is so critically endangered that multiple agencies have pitched in to help the project. However, it is the expertise of local bushcarers that is giving the Grevillea caleyi its best hope of survival.

Visitors to the Baha’i Temple at Ingleside might spot the Grevillea caleyi hiding in woodland in its six hectares grounds. A shrub growing to four metres, it’s as wide as it’s high, with long, lanky branches, adorned from late winter through summer with burgundy toothbrush-like flower clusters – known as racemes. The soft green leaves are divided and covered in rusty coloured hairs. A true treasure of the forest.

David Palmer, coordinator of the project to save Grevillea caleyi, says that it’s a local native found at only five or six sites. The shrub needs iron-rich soil to grow – a lateritic soil – that’s found on certain ridge tops. More sites probably existed but it’s likely that Mona Vale Road was built over them. Work to save it by the Pittwater Natural Heritage Association (of which Mr Palmer is the Secretary), began in 2013.

“This is one of the really long-term projects, where we’ve been able to help it to continue to flourish,” Mr Palmer tells Pittwater Online News.

“It’s a very limited distribution. It’s found nowhere else in the world.

In fact, it’s the only grevillea of its type and most of the sites where it’s found are subject to some sort of pressure. The main threats to its survival arise from human activity. They include changes in land use, urbanisation and associated infrastructure, an inappropriate fire regime, and disturbances such as weed invasion and rubbish dumping. The Baha’i site however, is less degraded than some.

“This is a good site in the sense that there won’t be any more development here because it’s a religious body that runs it and they keep it as it is,” Mr Palmer says.

“But they are not skilled at bush regeneration – so that’s where we come in, as skilled volunteers and project co-ordinators.”

The work will be familiar to any gardener – mainly weeding to allow seedlings to flourish.

“Grevillea caleyi on this site is quite healthy and there’s quite a big seedbank but it has been affected a lot by weeds and that’s our main activity to remove those weeds and help the seed bank to germinate,” he continues.

“There’s a lot of mature plants that are becoming senescent and dying and so there’s a lot of seeds in the ground that need to be assisted to germinate.

“And that happens through a number of ways. But what we focus on is weeding, disturbing the soil a little to allow the light to get in. And we find that’s been very successful in getting new plants growing.”

While many community groups struggle to attract funding, the Greater Sydney Local Land Services and the NSW Office of Environment and Heritage have funded the project for the last five years. They have jointly granted PNHA another $15,000 for this year and promised $50,000 each year for a further four years. Since the project began, it has been approached by government agencies recognising Grevillea caleyi’s significance – and the group’s expertise. The OEH (abolished last week by the NSW state government) has also worked with the group and represented it in negotiations. In the past, Pittwater Council and, since its amalgamation, Northern Beaches Council have also helped.

“We get approached from both (the) Office of Environment and Heritage and the Greater Sydney Local Land Services with offers of funding and we’re quite skilled now at running this project. We administer the funds and get all the work done.” Mr Palmer says.

However, what they are short of now is volunteers. Every two months they gather for a morning’s efforts around the temple but the funding is used to pay professional bush regenerators who, as well as supporting volunteers, do a lot of work at other times.

“It’s strange – it’s been a long project and when we first started it had a bit of novelty value or, for some reason or other, we got a lot of volunteers,” Mr Palmer says.

“But over the years, in spite of our advertising, that’s dropped off and we’ve gone from somewhere between 12 and 15 volunteers per session down to five or six.

“So, I don’t know what’s going to happen in the future, but we could use a few more volunteers.”

For anyone who would like to help save this precious grevillea and who has a couple of hours to spare – such as students, especially studying horticulture or botany, or retirees who enjoy a spot of gardening – your next chance to join in will be at a bush regen morning: on Monday April 8 starting at 8.30am. Please meet inside the grounds of the Baha’i temple. Volunteers should wear long trousers, a long sleeved shirt and boots or closed in shoes (to avoid tick bites). Training is provided as well as morning tea.

To find out more about the project and see a short film go to:

Article and Photos by Miranda Korzy