Greens focus on climate and inequality crises for Senate 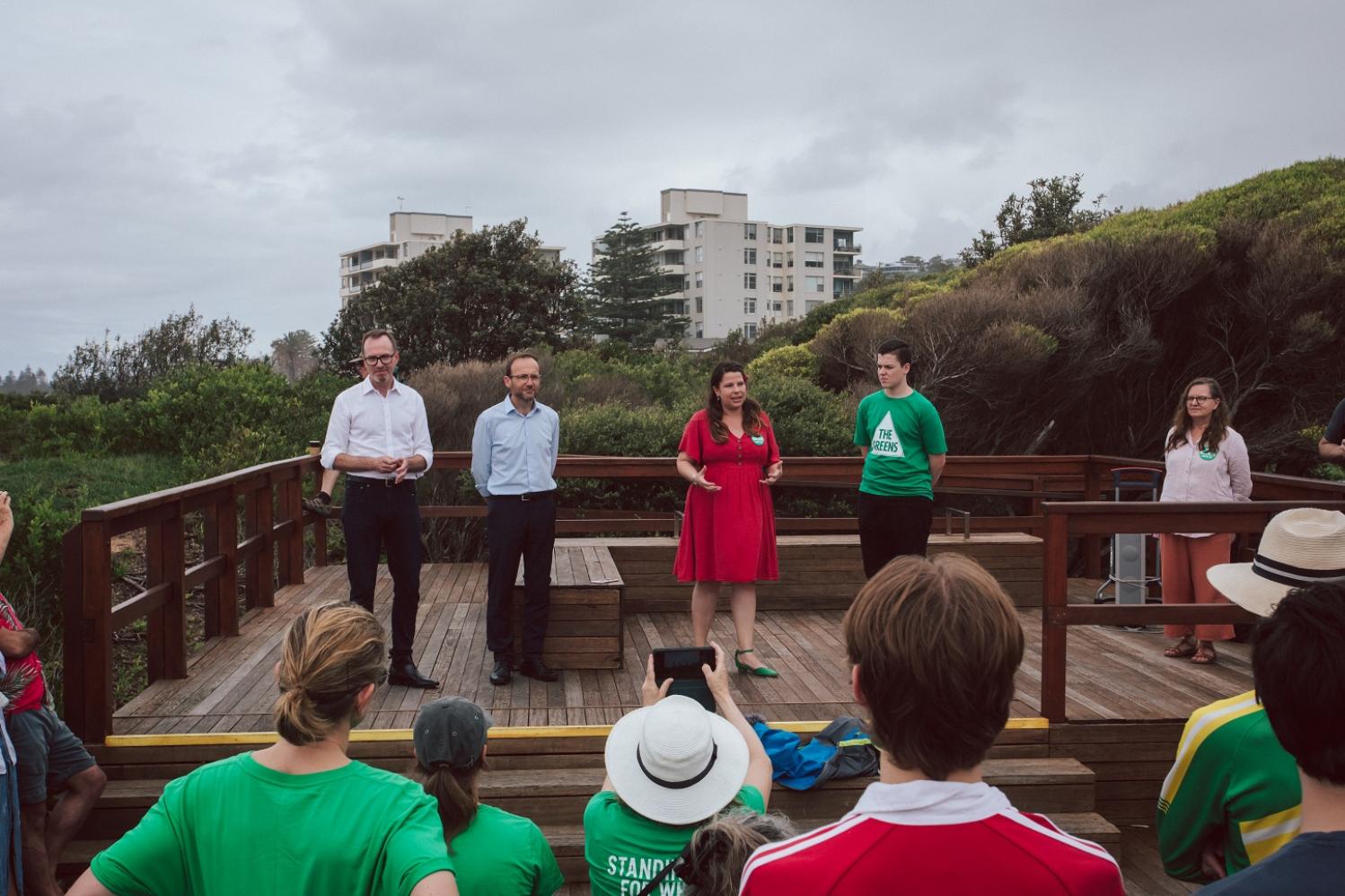 David Shoebridge, Adam Bandt, Kristyn Glanville  and Ethan Hrnjak at the Greens Launch of their 2022 Senate and Mackellar campaign

Mr Shoebridge, known in NSW for fighting corruption, for justice for Aboriginal people and support for victims of child abuse, will stand as the Greens’ lead candidate for the Senate at the election, due by May 21.

Under heavily overcast skies that were the precursor to torrential rain and flooding during the week, Mr Hrnjak said that in the face of imminent global climate disaster, the community needed to seize the chance to create meaningful change in Mackellar at the coming election.

“We are presently witnessing destructive, short-termist planning decisions aimed at adapting to climate change, coastal erosion and sea-level rise,” he told the crowd of supporters, many wearing Greens T-shirts or badges.

“The seawall just down the beach happens to be the most jarring example of this.

“The federal and state governments have forfeited responsibility for this stretch of coastline, resulting in the temporary stopgap solution that is the seawall.”

However, in addition to climate action, the Greens would deliver a federal ICAC with real teeth, he said.

Mr Hrnjak has deferred his enrolment to study Environmental Management and Law at Macquarie University to campaign for the election, after standing for council in Narrabeen Ward last year.

Ms Glanville described the seawall at Collaroy as indicative of the challenges the community faced in coming years.

“It’s not good enough that the government either pretends climate change isn’t a significant threat, or pretends that everything is under control.

“We need a serious discussion, followed by a serious plan, for both reducing carbon emissions, but also mitigating the impacts of climate change which cannot be avoided.

“We need a just transition not just for workers in coal mines or communities reliant on fossil fuels for their livelihoods, but also justice for communities whose environment, homes, and prosperity will be lost due to extreme weather events.

“The cost of paying for justice should be paid by those who caused the pollution - not socialised to the masses, or worse yet, shouldered entirely by the victims of climate disasters.”

Ms Glanville, who specialises in environmental and planning law, is undertaking a Phd focusing on environmental regulation of water in the Murray Darling Basin.

Meanwhile, Mr Shoebridge, who entered the NSW Upper House in 2011 and is giving up his seat in his bid for the Senate, said that votes on the Northern Beaches could be critical to the makeup of the federal Parliament.

This election provided a chance to have 12 Greens Senators “so neither party can get anything done without talking to us”, he said.

“I’m one of only three Greens MPs in the NSW Upper House and we’ve been collectively working on transparency, on pointing out the rorts and we’ve been critical to some of those ICAC inquiries …,” he said.

“Just imagine what we could do with 12 Senators.”

He also stressed the impact climate change would have on the Northern Beaches and the need for the federal government to provide funding.

The local council did not have the money or the power to solve all the problems and the state government had also stepped away from climate adaption, Mr Shoebridge said.

“You can see what happens when the federal government vacates the field on climate action,” he said.

“And you can just go for a walk down there at Collaroy and see that seawall.

“The idea that the answer to climate change is just extending that sea wall all up the Northern Beaches, that’s like a crime against nature.

“Because I’ve committed to this - we’ll always have the Northern Beaches and we won’t talk about the Great Northern Seawall.”

Mr Bandt said that the election would be about tackling the dual climate and inequality crises.

Wealth inequality in Australia was increasing, with a growing gap between the haves and have nots, while the Opposition voted with the government on key issues.

The Greens were part of a nationwide movement to remove the current “terrible government” in less than 100 days.

“If we can get David elected here through the really strong campaigns that Ethan and Kristyn are going to be part of, we could be in the balance of power in our own right,” Mr Bandt said. 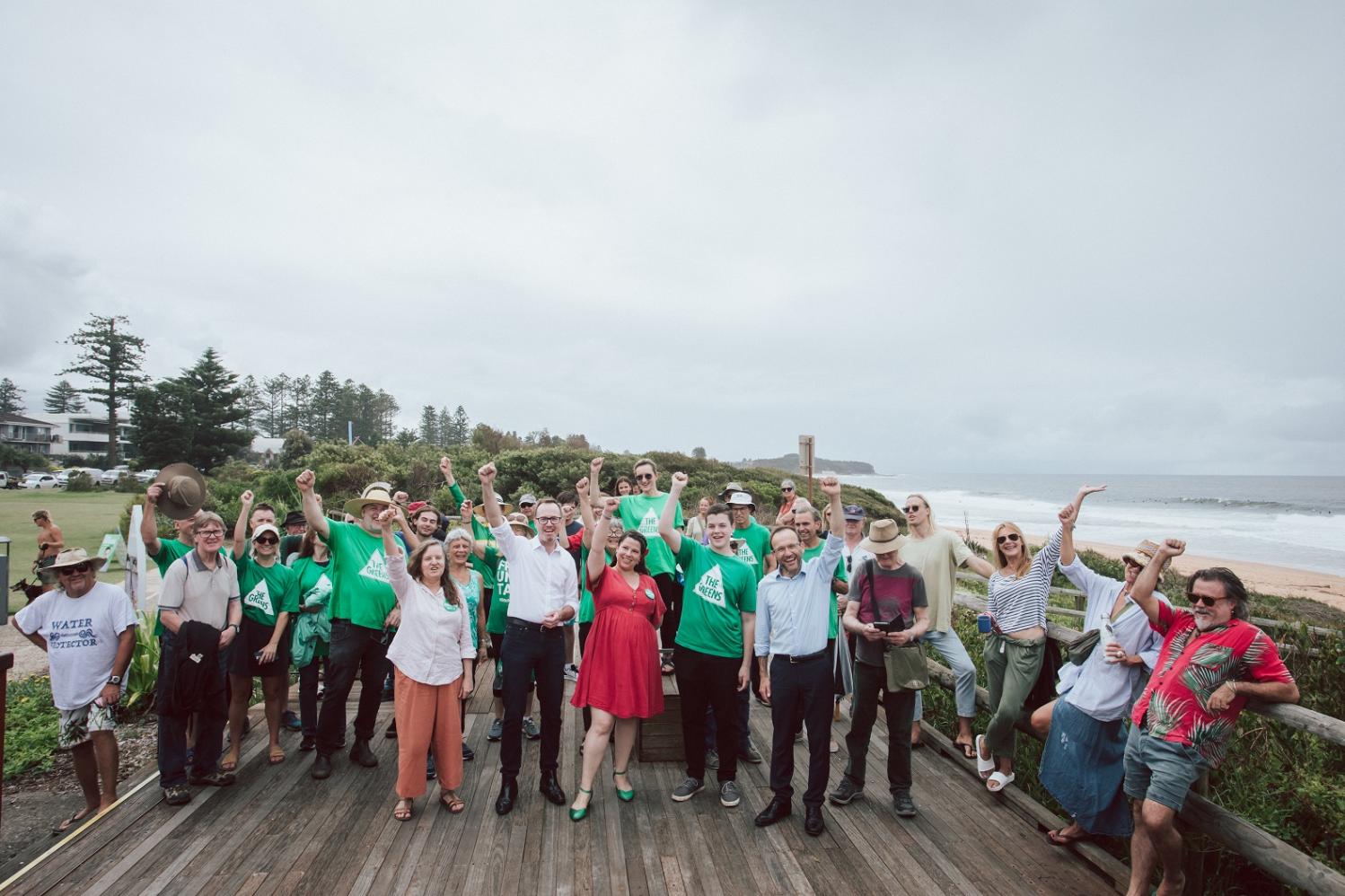 Supporters at the Launch of the Greens 2022 Election Campaign
Tweet