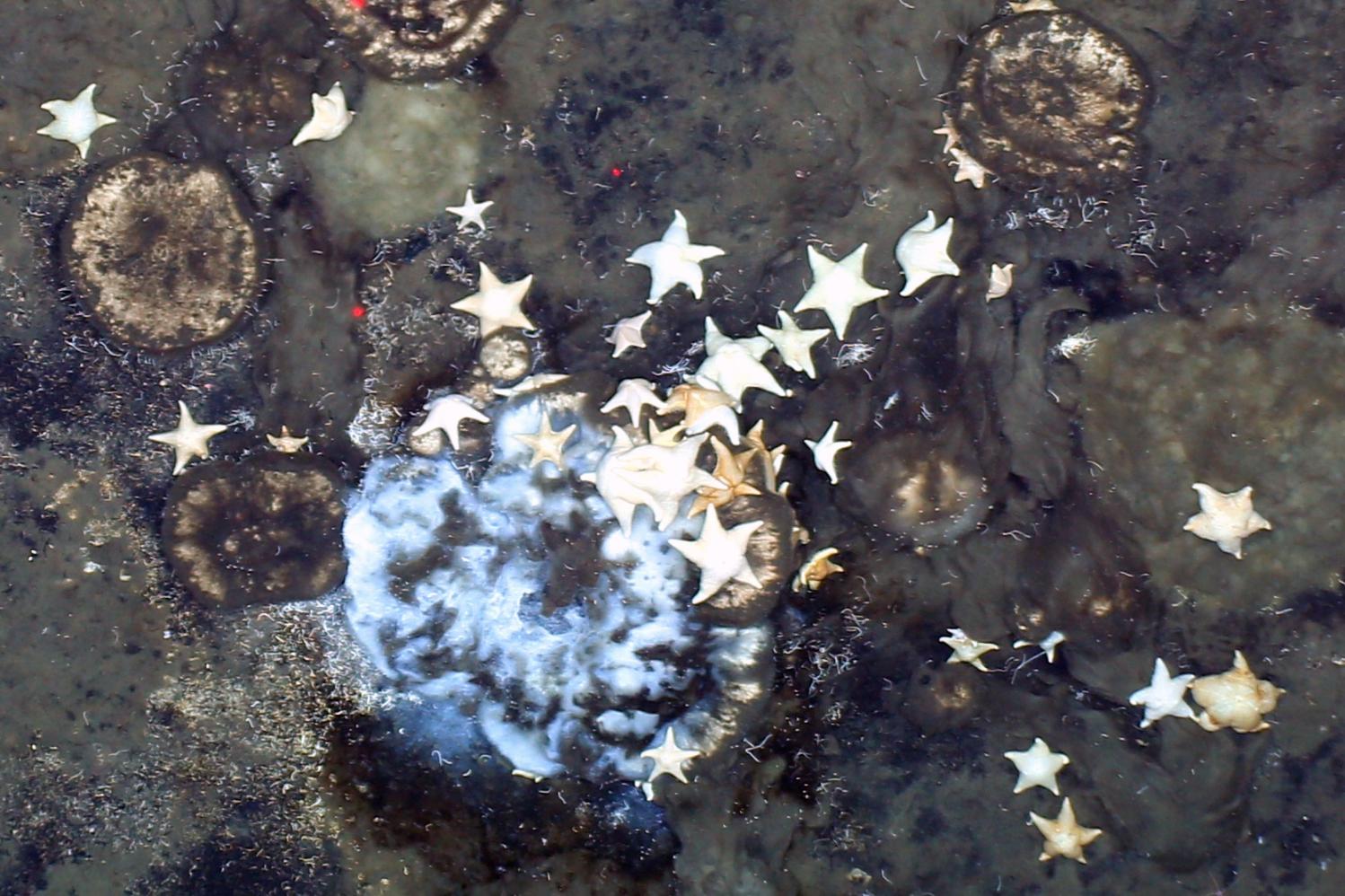 Scientists from Bremerhaven, Bremen and Kiel discovered a surprisingly rich and densely populated ecosystem on the peaks of extinct underwater volcanoes in the Arctic deep sea. These were dominated by sponges, growing there in large numbers and to impressive size. Photo: Alfred-Wegener-Institut / PS101 AWI OFOS system.

Scientists from Bremerhaven, Bremen and Kiel discovered a surprisingly rich and densely populated ecosystem on the peaks of extinct underwater volcanoes in the Arctic deep sea. These were dominated by sponges, growing there in large numbers and to impressive size. Photo: Alfred-Wegener-Institut / PS101 AWI OFOS system
February 8, 2022

Little food reaches the depths below the permanently ice-covered Arctic Ocean, because light limits the productivity of algae. However, scientists from Bremen, Bremerhaven and Kiel now discovered a surprisingly rich and densely populated ecosystem on the peaks of extinct underwater volcanoes, reporting their findings in the journal Nature Communications. These hotspots of life were dominated by sponges, growing there in large numbers and to impressive size.

"Thriving on top of extinct volcanic seamounts of the Langseth Ridge we found massive sponge gardens, but did not know what they were feeding on," reports Antje Boetius, chief scientist of the expedition, head of the Research Group for Deep Sea Ecology and Technology at the Max Planck Institute for Marine Microbiology and director of the Alfred Wegener Institute, Helmholtz Centre for Polar and Marine Research.

Using samples from the mission, first-author Teresa Morganti, sponge expert from the Max Planck Institute for Marine Microbiology in Bremen was able to identify how sponges adapt to the most nutrient-poor environment. Morganti explains:

"Our analysis revealed that the sponges have microbial symbionts that are able to use old organic matter. This allows them to feed on the remnants of former, now extinct inhabitants of the seamounts, such as the tubes of worms composed of protein and chitin and other trapped detritus." 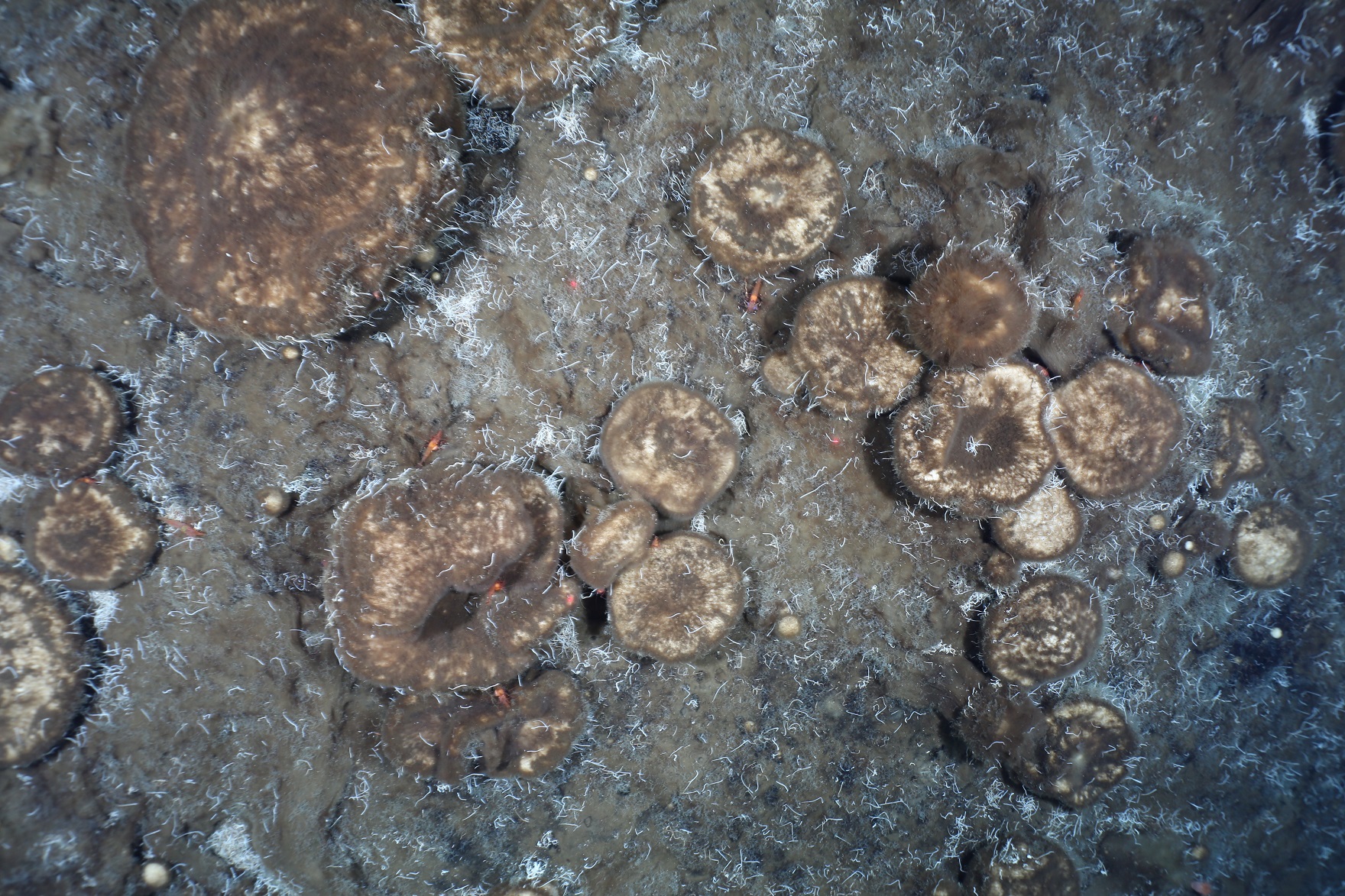 Living on the leftovers

Sponges are considered to be one of the most basal forms of animal life. They are nevertheless successful and abundant in all oceans, from shallow tropical reefs to the arctic deep-sea. Many sponges accommodate a complex community of microorganisms in a symbiotic relationship, which contributes to the health and nutrition of the sponges by producing antibiotics, transferring nutrients and disposing of excretions. This also goes for Geodia-sponges, which dominated the community on the Arctic seamounts. The unity of sponge and associated microbes is called a sponge holobiont.

Teresa Morganti cooperated with Anna de Kluijver, an expert from Utrecht University, and with the lab of Gesine Mollenhauer at the Alfred Wegener Institute to identify the food source, the growth and the age of the sponges. They learned that thousands of years ago, substances seeping from the seabed's interior were supporting a rich ecosystem, home to a variety of animals. When they died out, their remnants remained. Now these form the base of this unexpected sponge garden.

Microbial analysis of the microorganisms supported the researchers' hypothesis.

"The microbes have just the right toolbox for this habitat," explains Ute Hentschel from the GEOMAR Helmholtz Centre for Ocean Research in Kiel, who carried out the microbiological analyses with her team.

"The microbes have the genes to digest refractory particulate and dissolved organic matter and use it as a carbon and nitrogen source, as well as a number of chemical energy sources available there."

The scientists also showed that the sponges act as ecosystem engineers: They produce spicules that form a mat on which they crawl. This may further facilitate the local settling of particles and biogenic materials. The sponge holobionts can tap into this detrital matter, thus creating their own food trap. 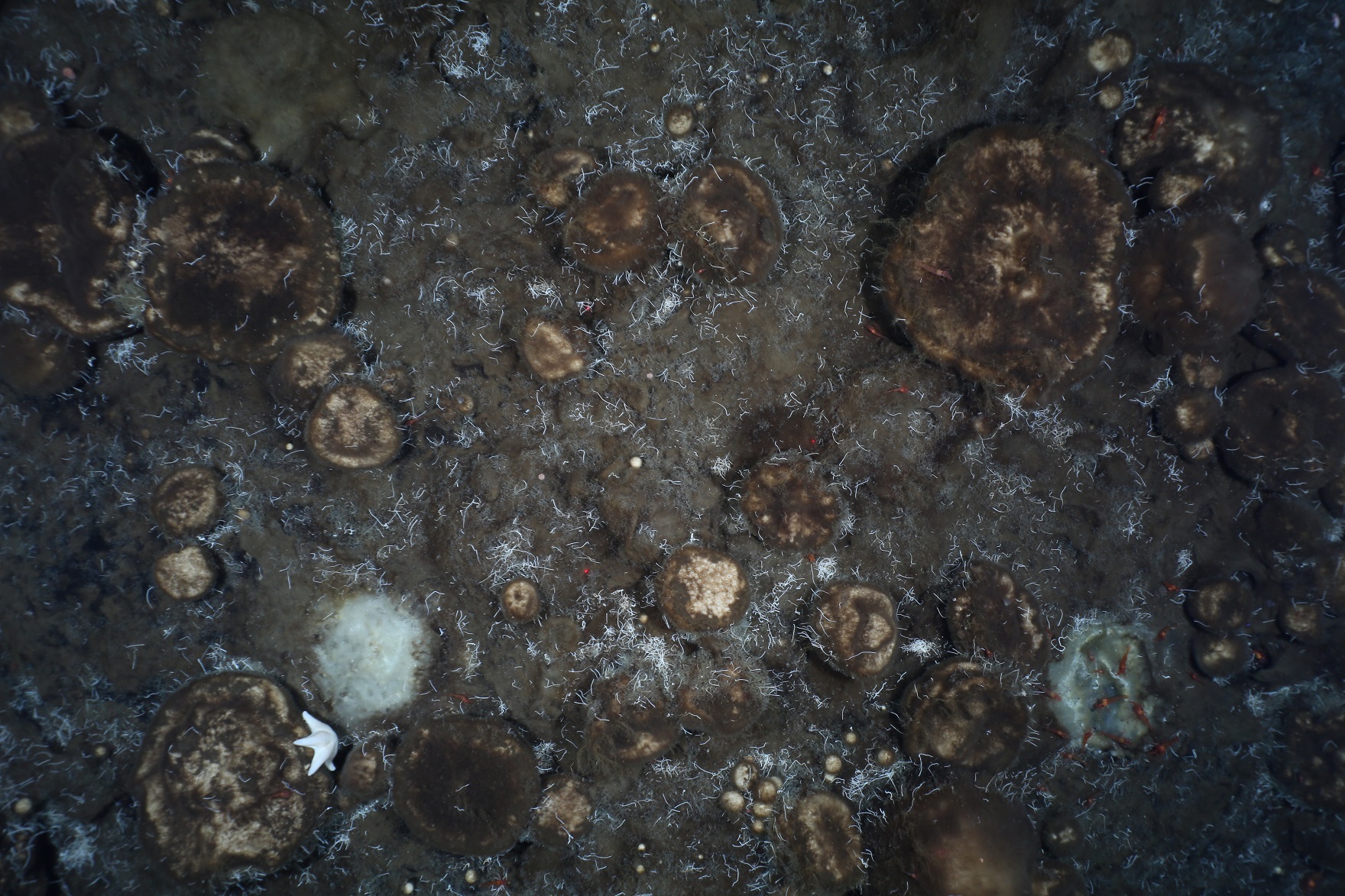 Langseth Ridge is an underwater mountain range not far from the North Pole that sits beneath the permanently ice-covered water's surface. There, sponge biomass was comparable to that of shallower sponge grounds with much higher nutrient input.

"This is a unique ecosystem. We have never seen anything like it before in the high Central Arctic. In the study area, primary productivity in the overlying water provides less than one percent of the sponges' carbon demand. Thus, this sponge garden may be a transient ecosystem, but it is rich in species, including soft corals," says Antje Boetius.

The Arctic is one of the most affected regions by climate change.

"Prior to our study, no similar sponge ground has been identified in the high Central Arctic, an area of the ice-covered ocean which remains understudied given the difficulties associated with observing and sampling such ice- covered deep-sea ecosystems," Morganti stresses.

The close cooperation of scientists from different institutions, including the Max Planck Institute for Marine Microbiology, the Alfred Wegener Institute and GEOMAR, enabled a comprehensive understanding of this surprising hotspot of life in the cold deep.

"With sea-ice cover rapidly declining and the ocean environment changing, a better knowledge of hotspot ecosystems is essential for protecting and managing the unique diversity of these Arctic seas under pressure," concludes Boetius. 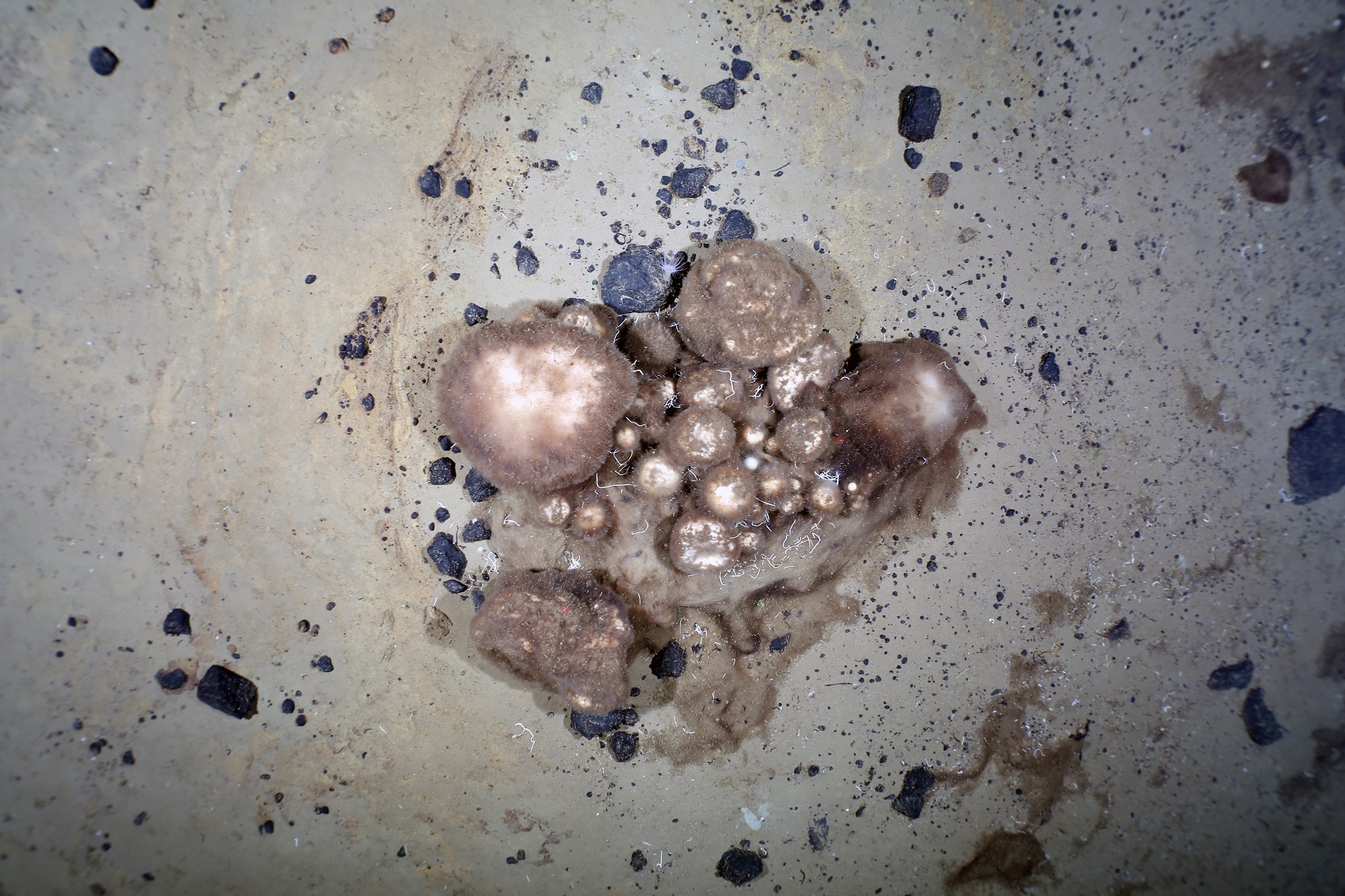 On average, the sponges are 300 years old, many are even older. They accommodate a complex community of microorganisms in a symbiotic relationship, which contributes to the health and nutrition of the sponges.Photo: Alfred-Wegener-Institut / PS101 AWI OFOS system