On day one (July 4th) of the women’s races Anna Östling, clearly a fan of this type of sailing claimed “amazing conditions, couldn’t ask for more.” As well as competing regularly on the World Match Racing Tour, the WIM Series and at many Match Cup Sweden competitions, Anna and her team were a major part of bringing back the GKSS Women’s Trophy, and ensuring the women race alongside the Open Class in the same boats. “We have been here on shore the past few years and it just feels wrong, but now we are out there where we want to be. I know the other teams are really enjoying it. We are really proud and its so nice all the hard work has paid off.”

At the top of the Women’s Class was WMRT newcomer, Renee Groeneveld and her Dutch Match Racing Team. “Today was really intense racing for us, the boat is quite new we have only done four days together and its just awesome racing.” On the subject of transitioning into the M32, Groeneveld said. “This is just a combination of my sailing campaigns actually. I have done match racing in London 2012 and have done two years in the Nacra 17.”

The Dutch skipper was unaware she was at the top of the leaderboard, but couldn’t stop smiling for the remainder of the interview after discovering her position at the close of day one, continuing. “I don’t event know where we are in the leaderboard actually, we are just taking it race by race and we will see where we end up. We are just enjoying the racing so much and want to do as much sailing as possible.”

Fusion Racing was right behind the Dutch team, posting on their team page, “It was a great day out on the water with lots of lessons learnt and incredibly tight racing!

We are currently sitting 1 point off 1st place and on equal points with the New Zealand team. With the final 2 fleet races tomorrow then we move onto match racing we are ready to give it all we got.”

The Fusion Racing Team of Clare Costanzo (Skipper), Hannah Lanz (Bow), Jess Angus (Main Trimmer) and Ruby Scholten (Trimmer) were joined in Sweden by Charlotte Porter, who was part of the RNZYS Youth Training Programme in Auckland. Charlotte had had the opportunity to compete in youth match racing events including Harken, Musto, Hardy, Nespresso and Warren Jones, mainly as a trimmer. In 2017 Charlotte completed her first WIM event in South Korea as main trimmer for Sarah Parker (AUS). Before Sweden Charlotte was competing in Helsinki, Finland at the WIM series event- Helsinki Match Cup with the NZ Women's Match Race Team.

The first day evening was rounded off with the official opening ceremony for GKSS Match Cup Sweden 2018 as all 17 teams were presented to the public and official guests and sponsors.

In their debut sailing in these boats the Fusion Racing team had excellent Qualifying rounds, placing 1st in two of the six races run.

The overnight leader, Renee Groeneveld dropped a couple of scores in the two morning races on Thursday, putting her into the Sail-Off spot to face Portugal’s Mariana Lobato in the first knockout stage. The Dutch skipper, former Olympic match racer and Nacra sailor, showed her match racing prowess as she took a 2-0 lead.

Lobato, also a former Olympic match racer from the London 2012 games, struck hard in the third to take a convincing lead. In the fourth and final match Groeneveld looked dangerous in the boat, won the start and led Lobato around the course. Pre-starts were the key to this pairing, with all four races being dictated by the four-minute pre-start sequence. Strong match racing manoeuvres, often not seen in the multihull era of WMRT, left the opposition high and dry in multiple cases.

The women next raced in Friday’s Semi Final Stage with a slightly lower breeze of 6-8 knots forecast. On the day itself the commentators called the conditions ‘tricky’, explaining the course can have 8 knots of breeze at the top and go up to 16 knots at the bottom.

New Zealand’s Olivia Mackay had made a surprise pick of opponent in Anna Östling, the most experienced M32 racer in the fleet. That left Clare Costanzo to battle Renee Groeneveld. Costanzo is skipper of the youngest team at the competition but flying as the highest ranked female team on the World Sailing Open Match Race Rankings. Renee Groeneveld with her experience as an Olympic match racer and former Nacra sailor and the experience gained through the extra ‘sail-off’ races, had an edge going into the semis.

The Fusion Racing Team also raced well and gained valuable experience in these boats, even recovering from a capsize at the end of the third race.

They now move on the America for the Governor’s Cup hosted by the Balboa Yacht Club in Newport Beach(International Youth Match Racing Championship. 16 – 21 July 2018), hopefully getting a small break to recover from travelling and competing.

Harry Price, team Downunder Sailing, also was knocked out in the Semis, with British team GAC Pindar, skipper Ian Williams, considered the most successful skipper on the World Match Racing Tour after winning 6 World Championship titles in his career, the first to secure place in Open Final with another 3-0 over.

The NZL Sailing Team members Alexandra Maloney and Molly Meech (Kiel 2018 winners in the 49erFX) Olivia Mackay, along with two-time Olympic medallist Jo Aleh and London Olympian Jenna Hansen also went 3-0 down to the Swedish Team Anna, skippered by Anna Östling, which means it will be a Dutch -Sweden dual for Finals and an Australian - New Zealand face-off for the Petit Finals.

by A J Guesdon 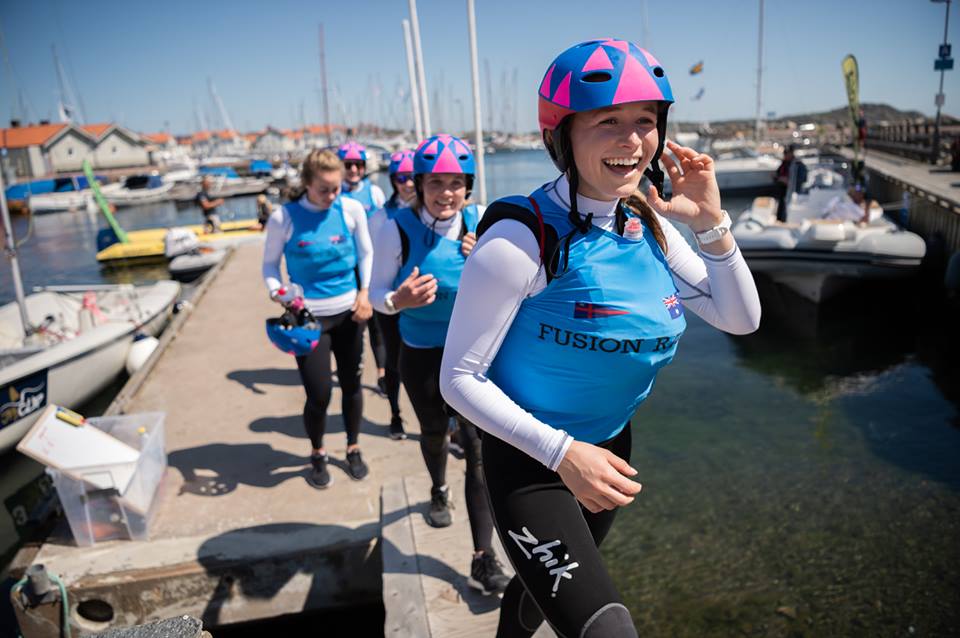