Four key climate change indicators – greenhouse gas concentrations, sea level rise, ocean heat and ocean acidification – set new records in 2021. This is yet another clear sign that human activities are causing planetary scale changes on land, in the ocean, and in the atmosphere, with harmful and long-lasting ramifications for sustainable development and ecosystems, according to the World Meteorological Organization (WMO).

Extreme weather – the day-to-day “face” of climate change – led to hundreds of billions of dollars in economic losses and wreaked a heavy toll on human lives and well-being and triggered shocks for food and water security and displacement that have accentuated in 2022.

The WMO State of the Global Climate in 2021 report confirmed that the past seven years have been the warmest seven years on record. 2021 was “only” one of the seven warmest because of a La Niña event at the start and end of the year. This had a temporary cooling effect but did not reverse the overall trend of rising temperatures. The average global temperature in 2021 was about 1.11 (± 0.13) °C above the pre-industrial level.

Criticizing “the dismal litany of humanity’s failure to tackle climate disruption,” United Nations Secretary-General António Guterres used the publication of the WMO flagship report to call for urgent action to grab the “low-hanging fruit” of transforming energy systems away from the “dead end” of fossil fuels to renewable energy.

In a video message, Mr Guterres proposed five critical actions to jump-start the renewable energy transition. They include greater access to renewable energy technology and supplies, a tripling of private and public investments in renewables and an end to subsidies on fossil fuels which amount to roughly $11 million per minute.

“Renewables are the only path to real energy security, stable power prices and sustainable employment opportunities. If we act together, the renewable energy transformation can be the peace project of the 21st century,” said Mr Guterres.

The world must act in this decade to prevent ever worsening climate impacts and to keep temperature increase to below 1.5°C above pre-industrial levels, he said.

“It is just a matter of time before we see another warmest year on record,” said WMO Secretary-General Prof. Petteri Taalas. “Our climate is changing before our eyes. The heat trapped by human-induced greenhouse gases will warm the planet for many generations to come. Sea level rise, ocean heat and acidification will continue for hundreds of years unless means to remove carbon from the atmosphere are invented. Some glaciers have reached the point of no return and this will have long-term repercussions in a world in which more than 2 billion people already experience water stress.”

“Extreme weather has the most immediate impact on our daily lives. Years of investment in disaster preparedness means that we are better at saving lives, though economic losses are soaring. But much more needs to be done, as we are seeing with the drought emergency unfolding in the Horn of Africa, the recent deadly flooding in South Africa and the extreme heat in India and Pakistan. Early Warning Systems are critically required for climate adaptation, and yet these are only available in less than half of WMO’s Members. We are committed to making early warnings reach everyone in the next five years, as requested by the United Nations Secretary-General Antonio Guterres,” said Prof. Taalas.

The WMO State of the Global Climate report complements the IPCC Sixth Assessment report, which includes data up to 2019. The new WMO report is accompanied by a story map and provides information and practical examples for policy-makers on how the climate change indicators outlined in the IPCC reports played out during the recent years globally and how the associated implications on extremes have been felt at national and  regional level in 2021.

The WMO State of the Global Climate report, which will be used as an official document for the UN Climate Change negotiations known as COP27 to take place in Egypt later this year.

Dozens of experts contribute to the report from Member-States including National Meteorological and Hydrological Services (NMHSs) and Global Data and Analysis Centers, as well as Regional Climate Centres, the World Climate Research Programme (WCRP), the Global Atmosphere Watch (GAW), the Global Cryosphere Watch and the EU’s Copernicus Climate Change services. 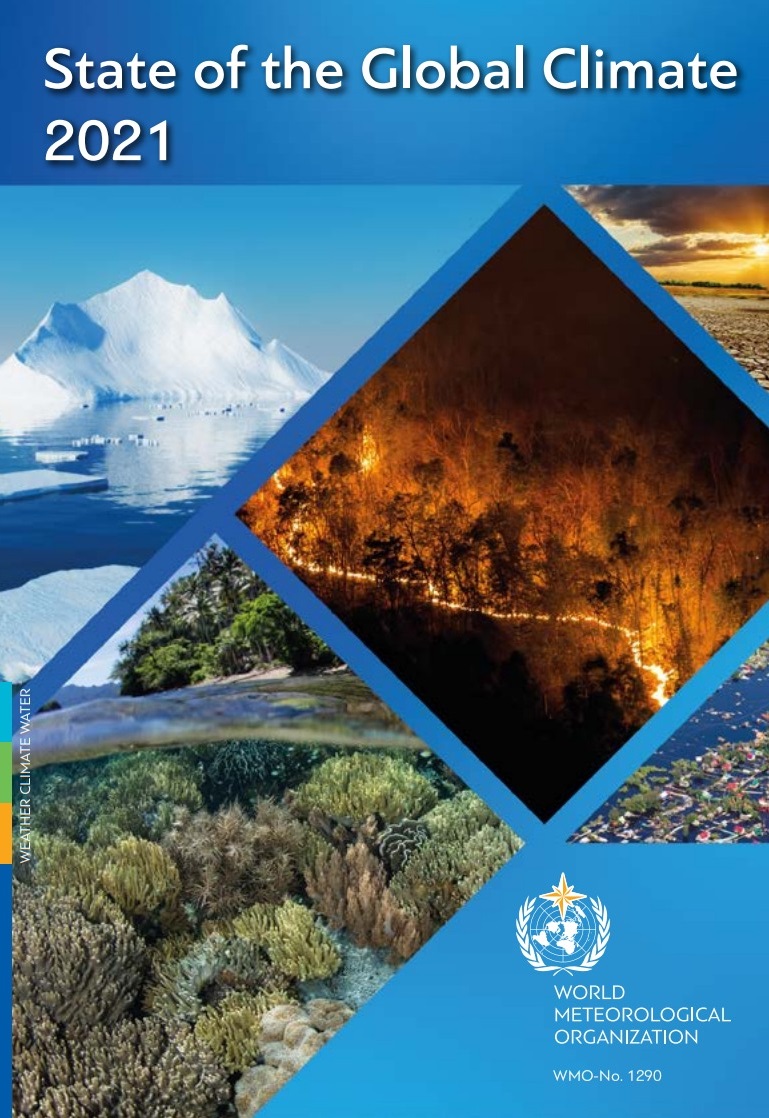 The global annual mean temperature in 2021 was around 1.11 ±0.13 °C above the 1850-1900 pre-industrial average, less warm than some recent years owing to cooling La Niña conditions at the start and end of the year. The most recent seven years, 2015 to 2021, are the seven warmest years on record.

Ocean heat was record high. The upper 2000m depth of the ocean continued to warm in 2021 and it is expected that it will continue to warm in the future – a change which is irreversible on centennial to millennial time scales. All data sets agree that ocean warming rates show a particularly strong increase in the past two decades. The warmth is penetrating to ever deeper levels. Much of the ocean experienced at least one ‘strong’ marine heatwave at some point in 2021.

Ocean acidification. The ocean absorbs around 23% of the annual emissions of anthropogenic CO2 to the atmosphere. This reacts with seawater and leads to ocean acidification, which threatens organisms and ecosystem services, and hence food security, tourism and coastal protection. As the pH of the ocean decreases, its capacity to absorb CO2 from the atmosphere also declines. The IPCC concluded that “there is very high confidence that open ocean surface pH is now the lowest it has been for at least 26,000 years and current rates of pH change are unprecedented since at least that time.”

Global mean sea level reached a new record high in 2021, after increasing at an average 4.5 mm per year over the period 2013 -2021. This is more than double the rate of between 1993 and 2002 and is mainly due to the accelerated loss of ice mass from the ice sheets. This has major implications for hundreds of millions of coastal dwellers and increases vulnerability to tropical cyclones.

Cryosphere: Although the glaciological year 2020-2021 saw less melting than in recent years, there is a clear trend towards an acceleration of mass loss on multi-decadal timescales. On average, the world’s reference glaciers have thinned by 33.5 meters (ice-equivalent) since 1950, with 76% of this thinning since 1980. 2021 was a particularly punishing year for glaciers in Canada and the US Northwest with record ice mass loss as a result of heatwaves and fires in June and July.  Greenland experienced an exceptional mid-August melt event and the first-ever recorded rainfall at Summit Station, the highest point on the ice sheet at an altitude of 3 216 m.

Exceptional heatwaves broke records across western North America and the Mediterranean. Death Valley, California reached 54.4 °C on 9 July, equalling a similar 2020 value as the highest recorded in the world since at least the 1930s, and Syracuse in Sicily reached 48.8 °C. The Canadian province of British Columbia, reached 49.6 °C on 29 June, and this contributed to more than 500 reported heat-related deaths and fuelled devastating wildfires which, in turn, worsened the impacts of flooding in November.

Flooding induced economic losses of US$17.7 billion in Henan province of China, and Western Europe experienced some of its most severe flooding on record in mid-July associated with economic losses in Germany exceeding US$20 billion. There was heavy loss of life.

Drought affected many parts of the world, including the Horn of Africa, Canada, the western United States, Iran, Afghanistan, Pakistan and Turkey. In sub-tropical South America, drought caused big agricultural losses and disrupted energy production and river transport. The drought in the Horn of Africa has intensified so far in 2022. Eastern Africa is facing the very real prospect that the rains will fail for a fourth consecutive season, placing Ethiopia, Kenya and Somalis into a drought of a length not experienced in the last 40 years. Humanitarian agencies are warning of devastating impacts on people and livelihoods in the region.

Hurricane Ida was the most significant of the North Atlantic season, making landfall in Louisiana on 29 August, with economic losses in the United States estimated at US$75 billion.

The ozone hole over the Antarctic was unusually large and deep, reaching its maximum area of 24.8 million km2  (the size of Africa) as a result of a strong and stable polar vortex and colder than average conditions in the lower stratosphere.

Food security:  The compounded effects of conflict, extreme weather events and economic shocks, further exacerbated by the COVID-19 pandemic, undermined decades of progress towards improving food security globally.  Worsening humanitarian crises in 2021 have also led to a growing number of countries at risk of famine. Of the total number of undernourished people in 2020, more than half live in Asia (418 million) and a third in Africa (282 million).

Displacement:  Hydrometeorological hazards continued to contribute to internal displacement. The countries with the highest numbers of displacements recorded as of October 2021 were China (more than 1.4 million), the Philippines (more than 386 000) and Viet Nam (more than 664 000).

Ecosystems: including terrestrial, freshwater, coastal and marine ecosystems – and the services they provide, are affected by the changing climate and some are more vulnerable than others. Some ecosystems are degrading at an unprecedented rate. For example, mountain ecosystems – the water towers of the world – are profoundly affected. Rising temperatures heighten the risk of irreversible loss of marine and coastal ecosystems, including seagrass meadows and kelp forest. Coral reefs are especially vulnerable to climate change. They are projected to lose between 70 and 90% of their former coverage area at 1.5 °C of warming and over 99% at 2 °C. Between 20 and 90% of current coastal wetlands are at risk of being lost by the end of this century, depending on how fast sea levels rise. This will further compromise food provision, tourism, and coastal protection, among other ecosystem services.

The report was released just ahead of the World Economic Forum 2022 Annual Meeting, which brings together more than 2,000 leaders and experts from around the world under the theme “History at a Turning Point: Government Policies and Business Strategies.” Mobilising public-private action to deliver on critical 2030 and 2050 global climate goals is a key topic on the agenda.

“As shown by the recent IPCC report, we already have the means and the know-how to cut emissions and limit global warming. We need to focus our efforts on bold policies and solutions that can quickly transform the way we produce and consume resources. People and partnerships have to be at the heart of our approach, whether it is to create new jobs, provide more access and affordability for everyone and to build a cleaner and greener living environment.”

“The upcoming Annual Meeting in Davos is a key opportunity to strengthen our resolve for climate action, translate ambition to deeds and forge more partnerships to co-create a future we can be proud of,” she said.

The World Meteorological Organization is the United Nations System’s authoritative voice on Weather, Climate and Water

WMO extends its gratitude for all the dedicated hard work from WMO’s network of experts which makes this report an authoritative source of information on the state of the climate and on climate impacts. We are especially grateful to the UK Met Office, which acted as lead author of this report.

Where possible the WMO climatological standard normal, 1981-2010, is used as a base period for consistent reporting. For some indicators however, it is not possible to use this baseline due to a lack of measurement during the whole period or because a longer period is needed to calculate representative statistics.

For global mean temperature, a baseline of 1850-1900 is used. This is the baseline used in recent IPCC reports as a stand in for pre-industrial temperatures and is relevant for understanding progress relative to the aims of the Paris Agreement.