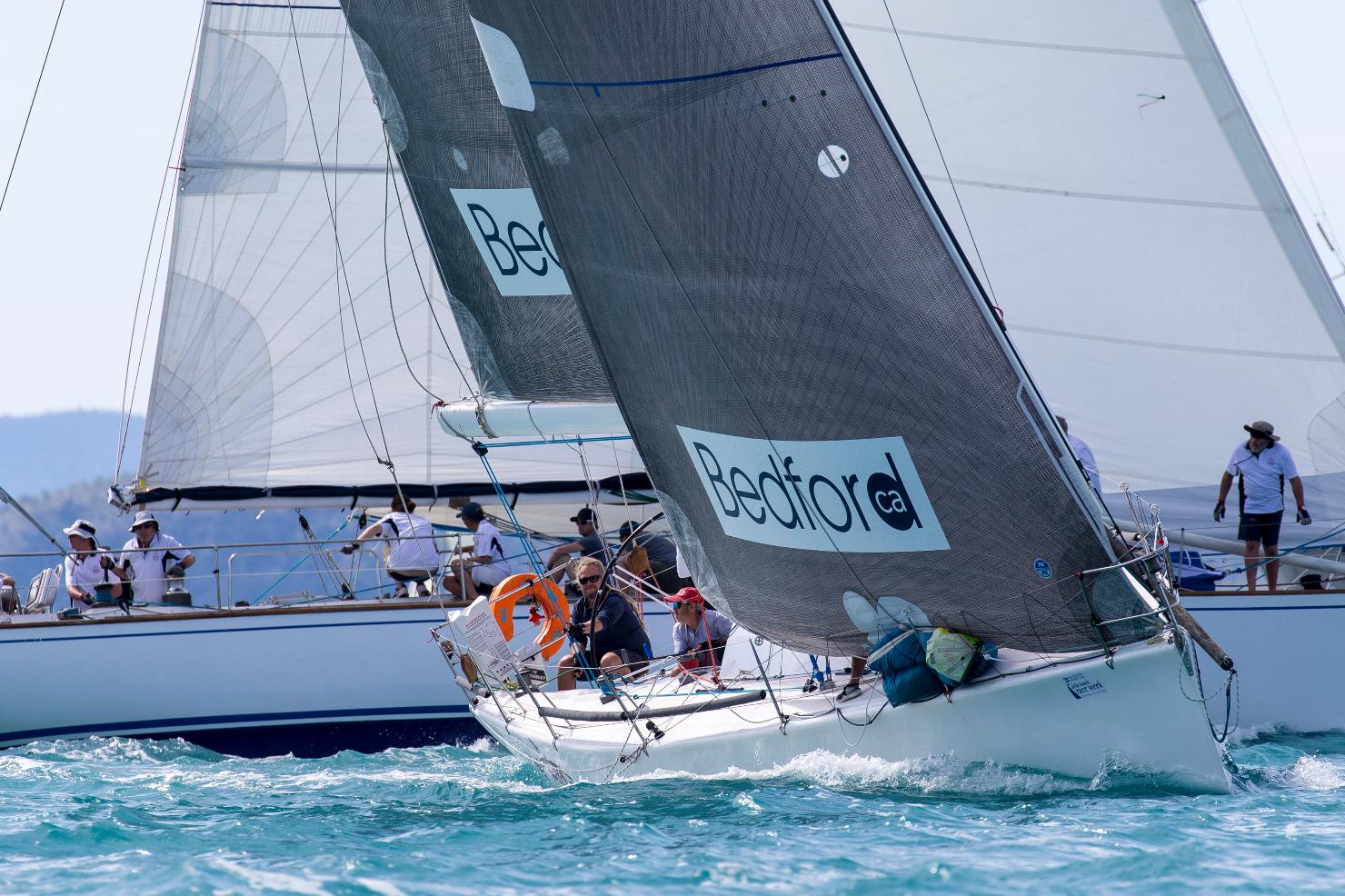 Mako, the much travelled Sydney 40 owned by a Newcastle, NSW syndicate is officially the first entry received for Airlie Beach Race Week 2022, which will be held in the Whitsunday Islands from 11 to 18 August.

Entered by Newcastle Cruising Yacht  (NCYC) CEO, Paul O’Rourke, Mako is a well-used yacht that was originally built for the 1999 Admiral’s Cup. Under the name of ‘Computer Products’, she formed part of the winning Dutch Team that year.

O’Rourke says the crew is fired up and ready to race in the Whitsunday Sailing Club’s (WSC) popular event: “The boat is entered for the whole northern circuit this year, but Airlie Beach is the only event I’ll be doing. Last time we were up there (2019), Mako finished third in Division 2. We plan to better that result,” he promises.

“We pretty much have a set of new sails. We’re just getting the main repaired after the Hobart…” Mako was among the 31 retirements in 2021.

“This is our fourth year as a syndicate of ten on Mako. Four of us, including our Rear Commodore, Adrian Kiely, will be at Airlie Beach. It’s my favourite regatta because it has a nice balance of island sailing and windward/leewards. It’s easy to find good accommodation, is socially fun and I enjoy the good old-fashioned hospitality the Club provides,” O’Rourke explains.

Syndication suits Mako’s owners, who take it turns to attend their calendar of events each year. These comprise the Rolex Sydney Hobart, Sailfest on home waters, Sail Port Stephens, the entire northern circuit of races and regattas, along with Lincoln Week in South Australia and the Festival of Sails in Geelong.

Ross Chisholm, event chairman for WSC’s annual regatta said, “We are pleased to accept Mako as the first official entry for our regatta. Like so many others, they were last here in 2019, so it’s good to see them and others returning.

“We also have 25 entries confirmed that were deferred from last year’s event that were unable to  attend because of Covid restrictions, so their owners requested their entries be held over for this year. So we’re looking forward to seeing a return to the large numbers we usually enjoy,  given the depleted fleets in 2020 and 2021 due to Covid restrictions.

Among those that will join Mako on the courses at Airlie Beach Race Week Festival of Sailing are the fun-loving but competitive crew on Mark Drobitko’s Beneteau First 40, Fruit Salid 3 (Qld). Wine Dark Sea, Peter Lowndes’ Lyons 49, (NSW) will also return.

Others among the 25 include: Skeeter (Peter Robinson), Re-Heat (Luke Ratcliff) and Lickety Split (Kevin Clarkson) in the Sports Boats, while Mike Peberdy will be back with his Extreme 40, High Voltage, to take on the rest.

She’s the Culprit (Culprit Syndicate), Joint Venture (Stephen Green) and Reverie (David Rose) will again be on the Performance Racing start line and Thomas Jordan’s Lunasea is set to vie for the overall win in the Trailable Yachts Division.

Tourism Whitsundays Chief Executive Officer, Rick Hamilton, said The Whitsundays is excited to welcome and host a high volume of entrants in the Airlie Beach Race Week Festival of Sailing in August.

“Events play a significant role in helping to build awareness for The Whitsundays, creating job opportunities across our region and showcasing our community spirit.

Airlie Beach Race Week Festival of Sailing is supported by the Queensland Government through Tourism and Events Queensland and is a feature on the It’s Live! in Queensland events calendar. 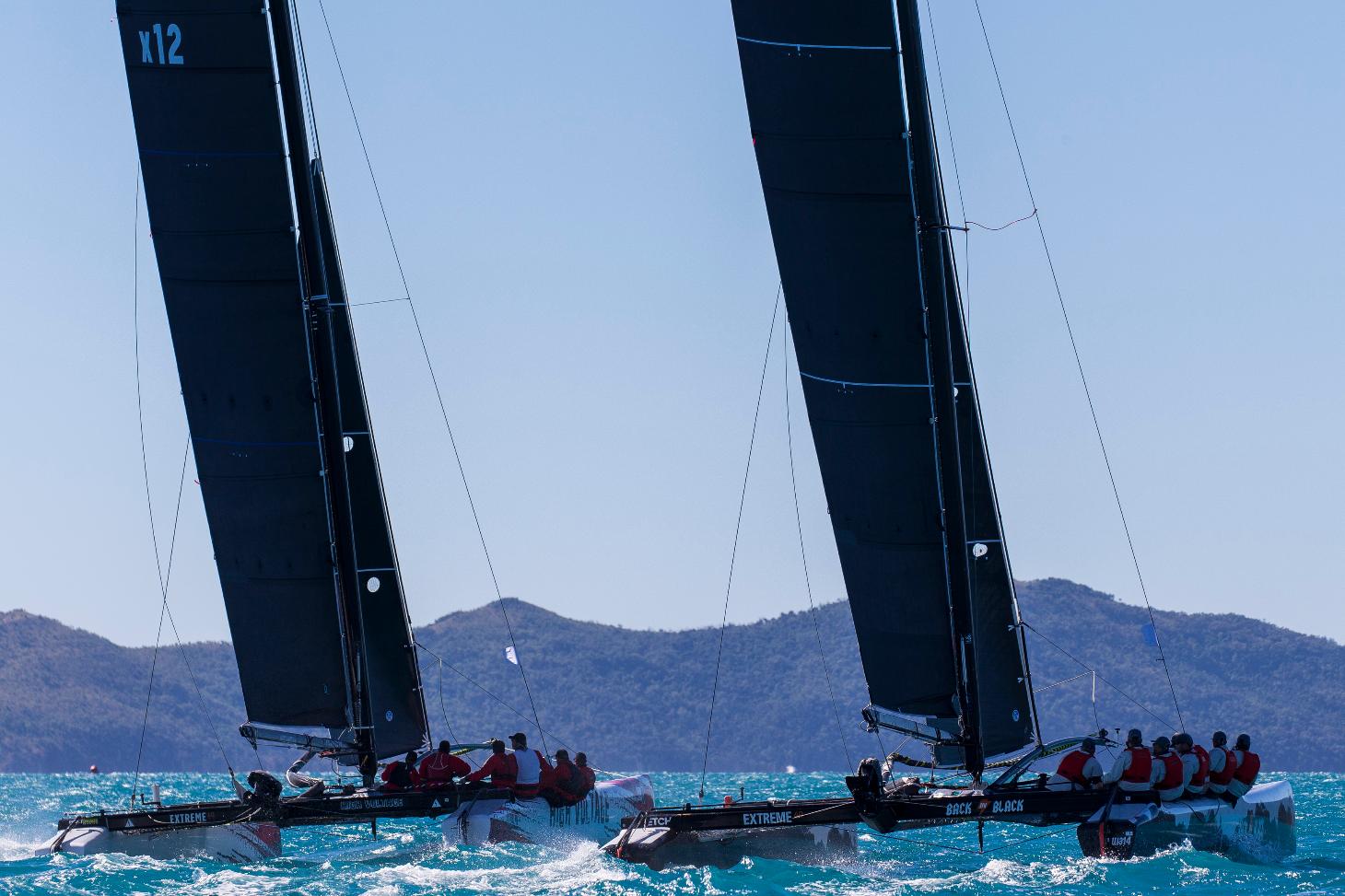 High Voltage and Back in Black went toe to toe in 2019. Photo: Andrea Francolini
Tweet