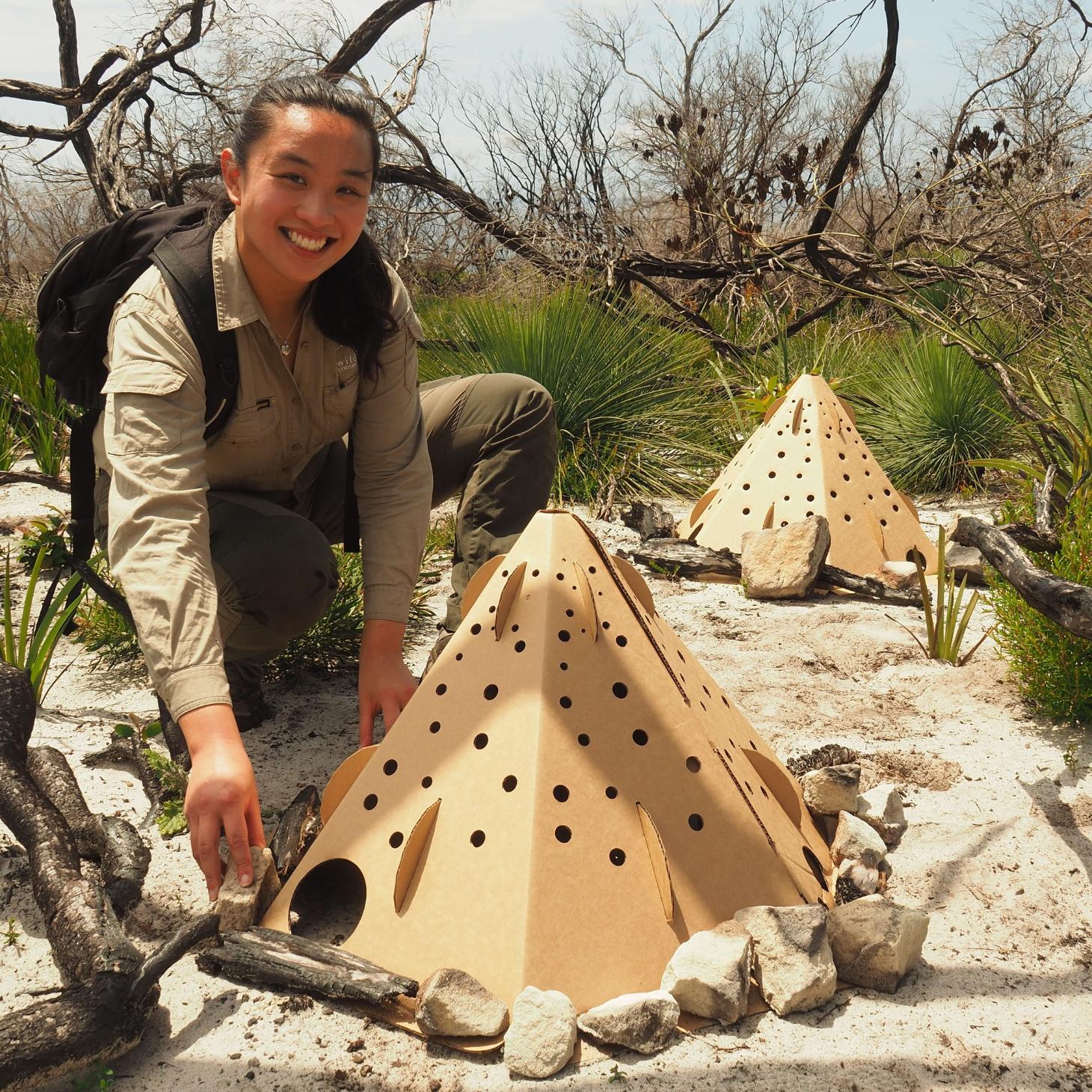 Launched at North Head Sanctuary in Manly is the world’s first biodegradable shelter that can be rapidly installed to provide refuge for native animals left exposed and vulnerable after a bushfire. Angela Raña placing one at Manly.

It’s the latest flat-pack innovation – a biodegradable shelter that can be rapidly installed to provide refuge for native animals left exposed and vulnerable after a bushfire. Newly designed ‘habitat pods’, developed by Dr Alex Carthey of Macquarie University, are this week being deployed as part of a world-first Australian Wildlife Conservancy research project at North Head Sanctuary.

Intense bushfires can be deadly for wildlife, both during the blaze and in the aftermath. The artificial shelters have been designed to address the high mortality of wild animals that occurs in the weeks and months after a bushfire. Indirect impacts, such as the removal of food and shelter, make this a dangerous period for animals, and the threat is compounded by intense pressure from hungry predators. An estimated three billion vertebrate animals were impacted in the 2019-2020 Black Summer fires which burnt across an area of more than 12 million hectares in eastern Australia.

The pods are now part of a PhD project by ecologist and former Australian Wildlife Conservancy intern, Angela Raña, co-supervised by Sydney University. In 2020, Raña set out to study the role of small native mammals as pollinators of North Head Sanctuary’s diverse banksia scrub. However, a hazard reduction burn that jumped containment lines in October 2020 destroyed her experiments and prompted a rethink.

“I’d been studying and monitoring the plants and animals here for two years, but after the fire we mostly found charred skeletons in the ash. It was heart-breaking.” said Raña of the burn.

“With the thick undergrowth almost completely removed, any surviving animals could just be picked off by birds, foxes and cats.” 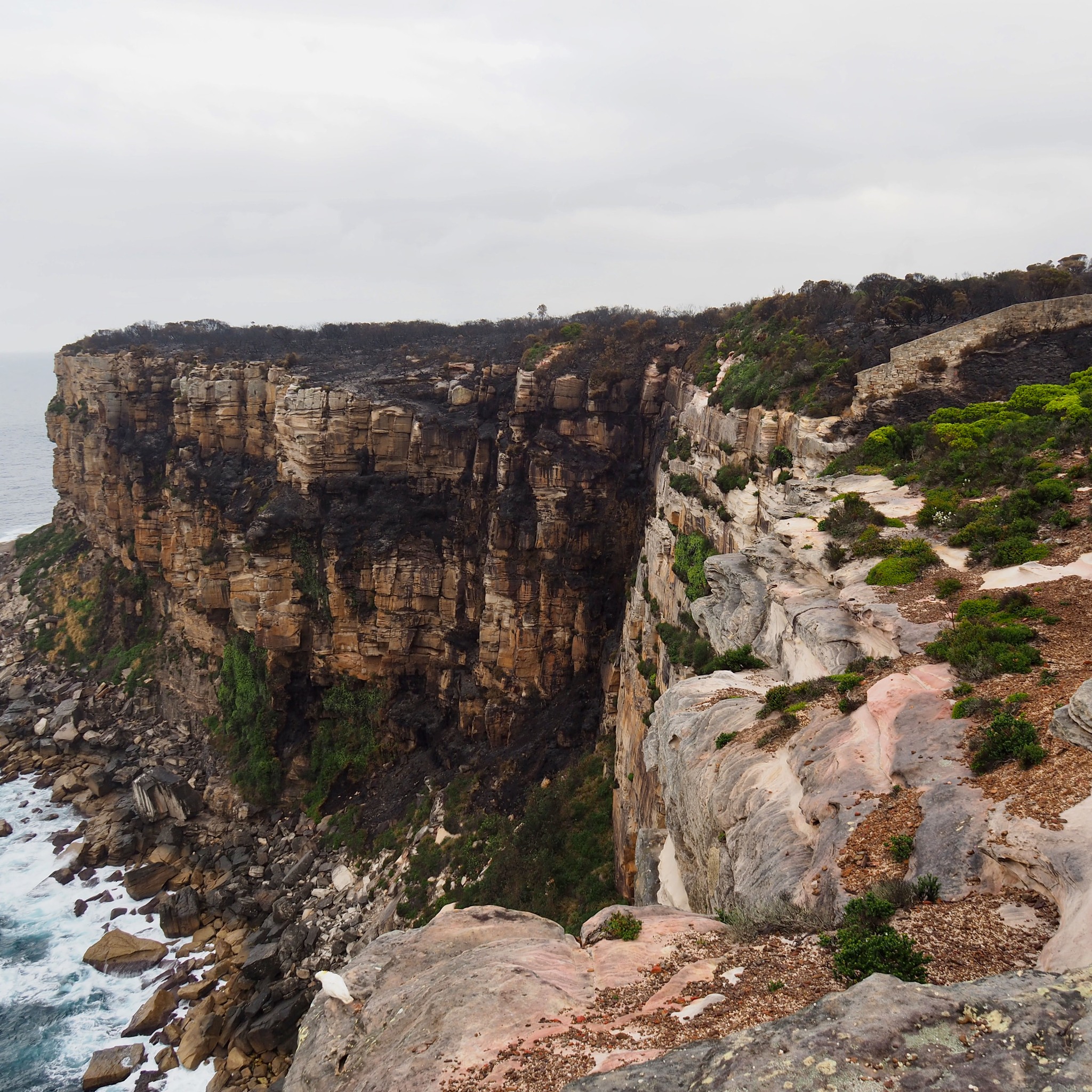 In October 2020, AWC was called in to rescue wildlife, create shelter and assess the impact to the headland after a NSW National Parks and Wildlife Service hazard reduction burn jumped containment lines. Photo: Joey Clarke/AWC

Raña’s project will now investigate the effectiveness of the habitat pods. Two hundred of the cardboard shelters are being deployed across parts of the headland that were impacted by the fire, for an experiment that will run for up to 12 months. It is hoped they will offer small animals short-term refuge from the elements and a place to hide from predators like feral cats, which have been shown to take advantage of easier hunting conditions post-fire.

The habitat pods themselves take the shape of a sturdy, six-sided pyramid made from folded cardboard, perforated with multiple small holes where animals can scamper in and out. Unlike the wire and shadecloth structures that have been used as post-fire shelters previously, the pods are light, easy to transport and set up, and entirely biodegradable.

The basic nature of the cardboard used for these pods is relatively resistant to water. This project will give AWC excellent data on how long they last but preliminary tests show they hold up very well, even with high rainfall. 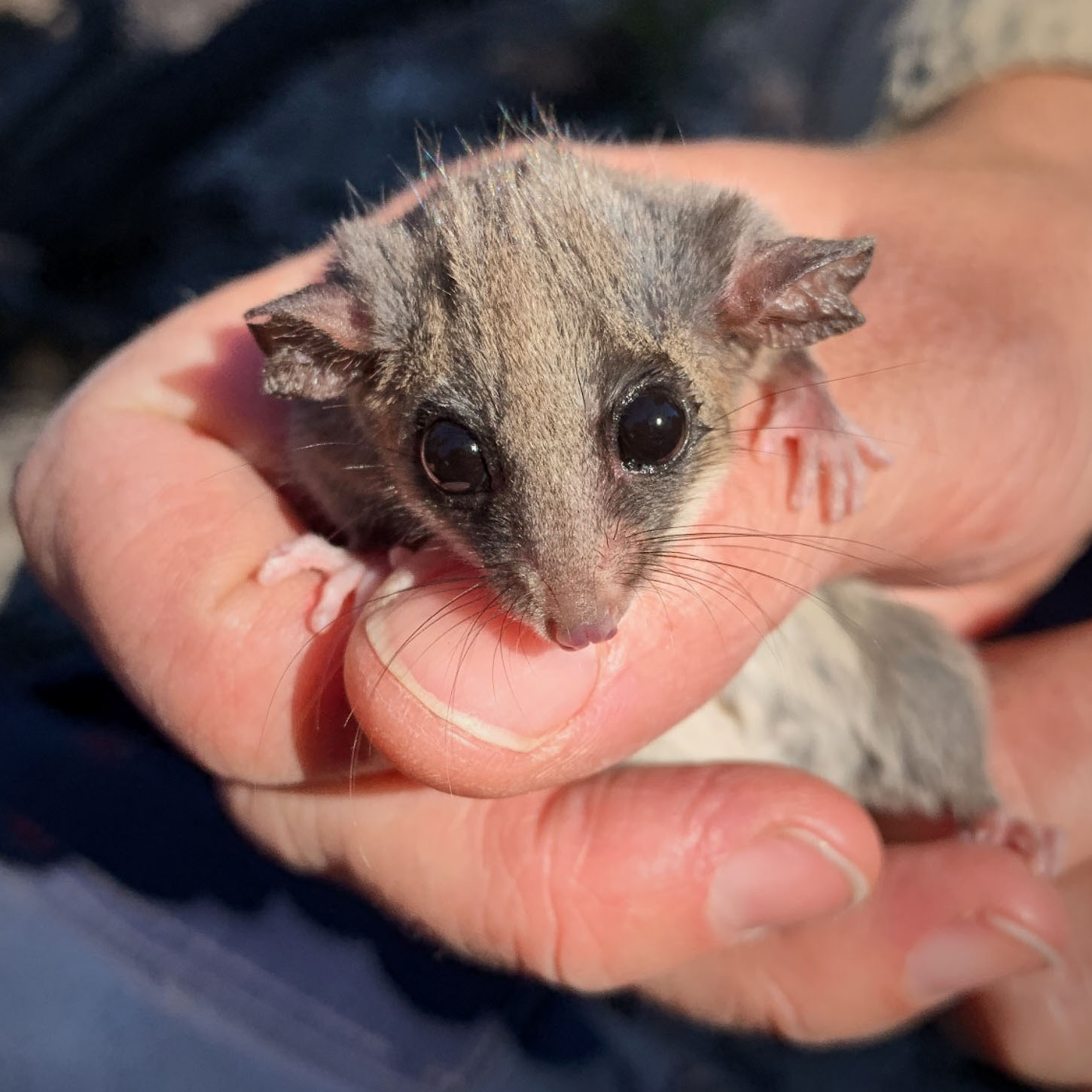 The pods will assist wildlife such as the Eastern Pygmy Possum (pictured) in seeking refuge from the elements and providing a place to hide from predators. Photo: Holly Nelson/AWC

Dr Carthey’s design was informed by her career researching predator-prey relationships and the key realisation that availability of habitat is a critical factor after a burn.

“The Black Summer fires acted as a wake-up call, and that got me thinking about what we could do to help wildlife survive,” Dr Carthey said.

“I had some conversations with the team behind the Living Seawalls project (finalists of the inaugural Earthshot Prize), who are also at Macquarie University, and their designer Alex Goad of Reef Design Lab … we even experimented with 3D-printing some moulds for prototypes from recycled paper pulp, but in the end the folded design held up better in testing.”

Estimates of the numbers of animals killed has been based on how many would have been in the path of these mega fires, says Carthey. Three billion vertebrate animals were said to have been in the way of blazes that burnt more than 12 million hectares in eastern Australia.

“But there haven’t been enough studies to confirm the numbers,” she says. “There is some thinking that more animals might die in the post-fire period from predators and exposure than during the fires.

“Pods like these have a huge potential to make a difference.” 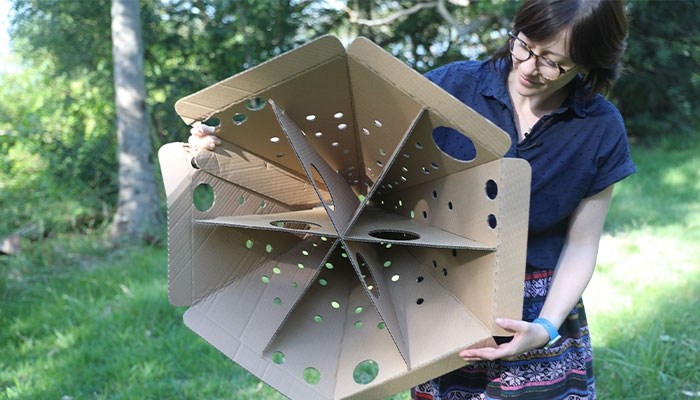 North Head Sanctuary was chosen for the first ever real-world trial of the habitat pods. The headland is the site of an ambitious mammal reintroduction program run by Australian Wildlife Conservancy, working in partnership with Harbour Trust.

Three small mammal species which were locally extinct on North Head have been restored since 2017: the Eastern Pygmy Possum (Cercartetus nanus), Brown Antechinus (Antechinus stuartii), and Bush Rat (Rattus fuscipes). All three species have been recorded since last year’s blaze, and are likely contenders to use and benefit from the installed habitat pods. 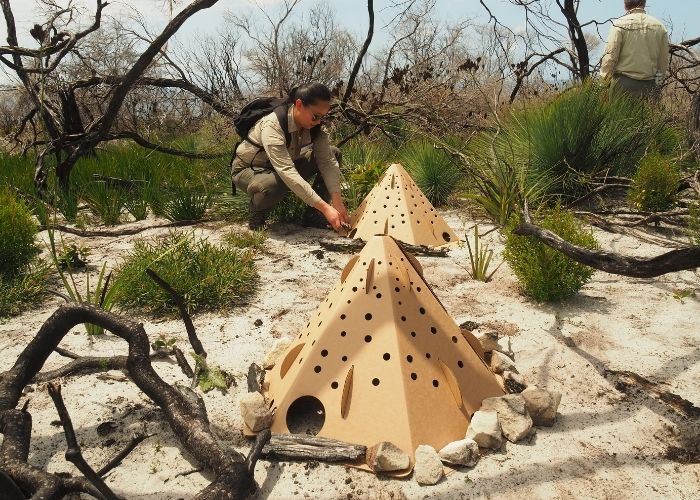 Two-hundred Habitat Pods will be deployed across the headlands ahead of the upcoming bushfire season. Photo: Joey Clarke/AWC

The ecologist leading the reintroduction program, Dr Viyanna Leo, had input into the design of the habitat pods, established the research at North Head and co-supervises Raña’s research project.

“I think this work has huge potential,” Dr Leo said. “Large-scale bushfires are an ongoing concern for conservationists, especially as the climate heats up. The habitat pods could be an effective new tool for bushfire response that makes the difference between life and death for thousands of native animals.”

A further 100 will be used in a field trial in the Marramarra National Park, led by a student of Carthey’s, comparing the effectiveness of the pods in recently burnt areas with nearby unburnt areas.

Remote sensing wildlife cameras, triggered by motion and heat, will capture the comings and goings. Surveys of both the pods and vegetation regrowth will be assessed once a month during what is expected to be a 12-month project.

Each year on December 4th, Wildlife Conservation Day seeks to spread awareness about the need to preserve and protect the natural world and its inhabitants.

Australia has the worst rate of mammal extinction in the world. Since European settlement in 1788, more than 10 per cent of mammal species have disappeared due to predation by introduced species, such as feral cats and foxes, and habitat degradation.

As a leader in the field, the Australian Wildlife Conservancy's' mission is the effective conservation of all Australian native animal species and the habitats in which they live.

Find out more at: https://www.australianwildlife.org/