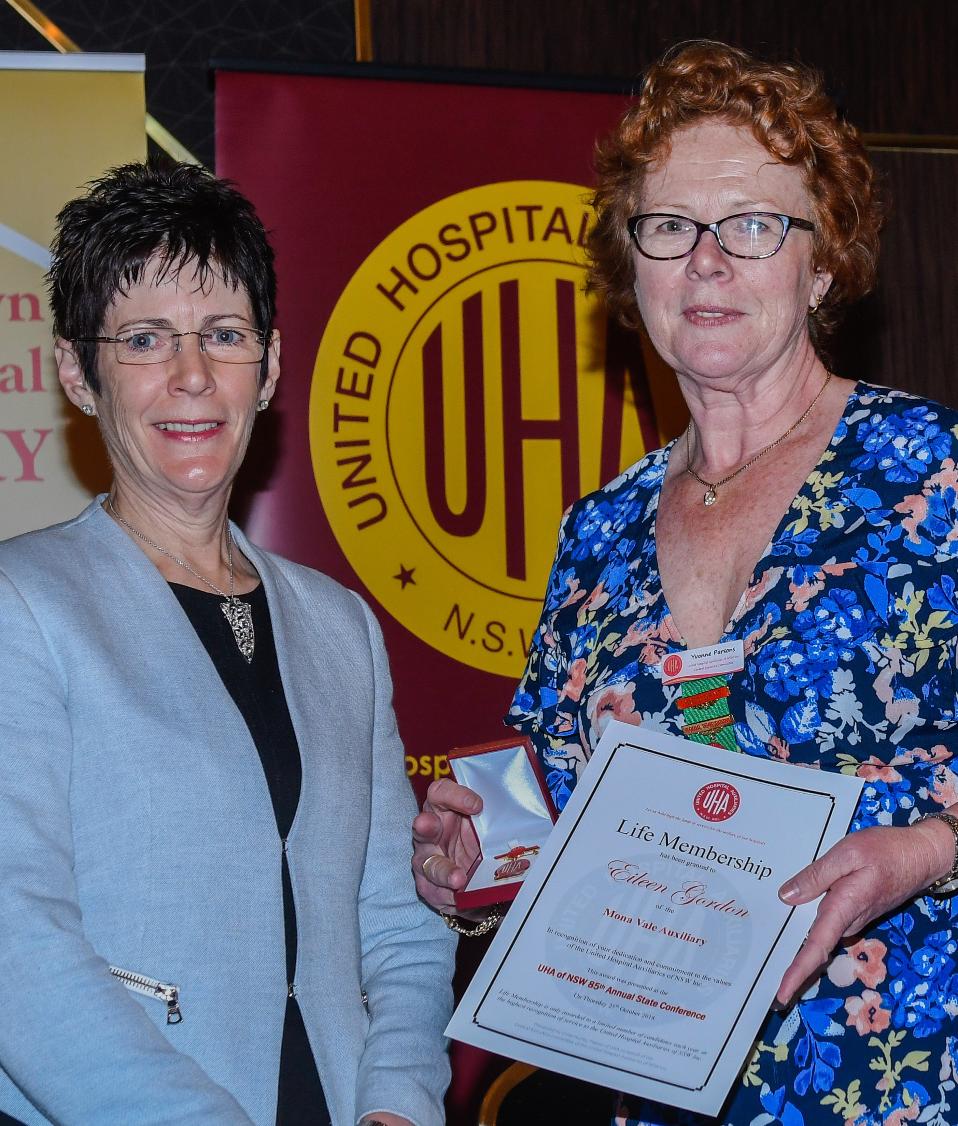 Community leader Eileen Gordon has been awarded Life Membership of the United Hospitals Auxiliary. Life Membership is the highest honour that can be bestowed on a UHA Member.

Unfortunately Eileen could not attend and her award was accepted by Mona Vale Hospital Auxiliary President and Regional Representative Dr. Yvonne Parsons from Mrs Linda Hurley, wife to the NSW Governor and Patron of the UHA.

The 85th UHA State Conference took place this week, October 24th and 25th, at Bankstown Sports Club. This year's conference was hosted by United Hospital Auxiliary Campbelltown Branch who decorated the tables beautifully, including items to reflect Cambelltown's history, and ran a raffle to raise funds for their hospital - Campbelltown.

Since 1933 more than 190 branches of the Auxiliary throughout NSW have supported their individual local health services, providing equipment and services for the benefit of patient comfort and care. In the year 2016-2017 they raised $10,772,339.89 of which the local Mona Vale Hospital Auxiliary was the highest achiever. MVHA again received awards for their fundraising this year at the UHA Conference.

Eileen Gordon has been one of our foremost workers for Mona Vale Hospital through the Hospital's auxiliary, having given 18 years service to the Mona Vale Branch. Prior to that Eileen was responsible for combining the original Mona Vale, Newport, Avalon, Narrabeen and Elanora Branches.

With each new monthly fundraising activity, Eileen organised the initial activity and then passed that responsibility to other members of the Auxiliary. The MVHA relates Eileen instigated all the fundraising activities they now have; stalls, sausage sizzles, fashion parades, raffles etc. Under her leadership Eileen increased the amount of funds raised markedly. MVHA states Eileen was mainly responsible for the UHA certificates issued to their branch for funds raised year after year.

Her Promotion of the Branch within the Community has been phenomenal too. Making the Auxiliary known to the public, interacting with clubs in the district such as the art centre, Mona Vale Garden Club, local bridge club, politicians, local council and the media to name a few, has been her object and achieved aim.

Eileen has outstanding experience in nurturing new members and organising events. Her mentoring of new and existing members,  after finding out their skills, has meant many have taken a place in a suitable position.

Eileen was Pittwater Woman of the Year in 2010, and the recipient of the Federal Member's Award for Contribution to the Health Service to the Community in 2012.

ln 2013 Eileen was awarded the Community Service Award from the Rotary Club of Brookvale.

She continues her involvement with this branch as Public Relations Officer and organiser of the fundraising monthly Sausage Sizzle.

MONA VALE HOSPITAL AUXILIARY CONTINUES TO WORK FOR THE COMMUNITY

The Mona Vale Hospital Auxiliary members advise that they will still be working hard raising funds for the renovation of the rehabilitation units and ongoing maintenance of the hydrotherapy pool and amongst other requirements on site when patients and staff move to the Northern Beaches Hospital.

The Auxiliary is grateful for the donations from our community and craft, knitting and sewing donations and the stalls will continue in the future.  They will be holding one in the vacant shop in Pittwater Place, Mona Vale from October 29th to November 3rd.

The Auxiliary organises weekly high teas for rehabilitation patients and the breakfast club to assist patients to become independent after suffering strokes etc.  The monthly sausage sizzles will continue also.

The kiosk will remain open on its current site during the period the hospital has closed until it is relocated next to the new Urgent Care Centre early next year.

Find out more at: www.monavalehospitalauxiliary.org