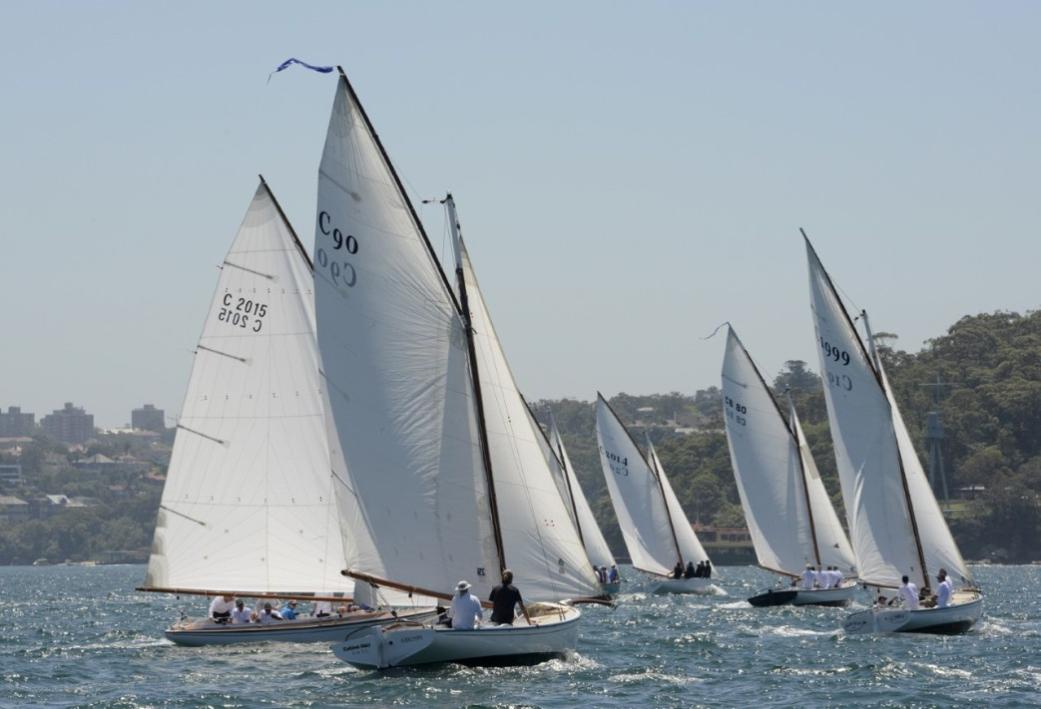 Coutas on the harbour 2015 Gaffers Day - photo by John Jeremy

When Jim Wilshire’s rudder came loose and went missing off his Couta Boat Eclipse, which was travelling east from Perth atop a delivery truck between Bordertown in South Australia and Horsham in Victoria, the owner’s shot at Couta Week and the class’ national championship hit a snag.

The Sorrento and Sydney fleets rallied to help Wilshire and Eclipse’s co-owner Allister Inglis, two other owners offering spare rudders and Couta Boat builder Tim Phillips supplying a standard blank rudder to be faired and shaped to suit, the option they went with.

“As soon as the trucking company realised the rudder had shaken loose they sent someone to drive back three hours and found the spot on the road where it came off, but couldn’t find it,” Wilshire said, adding, “the goodwill from the class has been fantastic.”
Coutas head to Sydney - photo by Tim Phillips
Wilshire is very much back in the game with a state-of-the-art rudder for his 1999 built Couta and on  Wednesday October 4 the last of the 10-strong Victorian fleet arrived into Sydney on B-double-trucks, completing the fleet in time for a fully packed 10 day program.

Twenty-two Couta Boats from the traditional and modern-built eras will race on Sydney Harbour in the Royal Prince Edward Yacht Club’s two-race Thistle Cup on Friday October 6 then on Saturday in the Sydney Amateur Sailing Club’s Muriel Trophy.

Sunday’s biennial Gaffer’s Day, another SASC event, will boast a 90-strong line up of sparkling mostly white hulls, timber decks and tillers, gleaming varnish and glorious gaff-rigs. The harbour race will feature a bolstered Couta class in town for next week’s national title on Pittwater plus special international guest Dorade, the Olin Stephens 1929 designed 52-footer from the USA. There may even be an Australian Prime Minister sailing his Couta Boat called Rob Roy.

Monday is a rest day then the Coutas will cruise in company past the impressive sandstone cliffs of North Head and onto Broken Bay for a relaxed Wednesday twilight organised by the Woody Point Yacht Club, mixed in with various midweek social gatherings.

Frivolities will end to some extent when the Couta Boat Association Nationals in conjunction with the Wattle Cup begin on Saturday October 14 from the Avalon Sailing Club, the first time the national title has been held outside the birthplace of the Couta Boat, Victoria and in particular the Mornington Peninsula.

NSW class president Larry Eastwood says: “The nationals will follow the traditional Wattle Cup format which includes windward/leewards on Saturday then Sunday’s very tricky passage race around both Lion Island and Scotland Island. The latter is a lottery and can throw the average punter way off if they aren’t paying attention.

“We’ve amended the sailing instructions this year so the Wattle Cup trophy will go to the handicap winner of the traditional Coutas, the original fishing boats or those built as replicas, rather than the five modern-built Coutas among the fleet.”

On the host club Eastwood added: “Avalon Sailing Club has been terrific with lots of good volunteer help, energy and enthusiasm, which makes or breaks these types of regattas.”

Separate to the Wattle Cup trophy is the CBA Nationals trophy sent up from the Sorrento Sailing Couta Boat Club for the occasion. In all the years of the Australian title only Victorians teams have made it onto the trophy, providing plenty of motivation for the NSW fleet and two WA entries to play their hardest game. 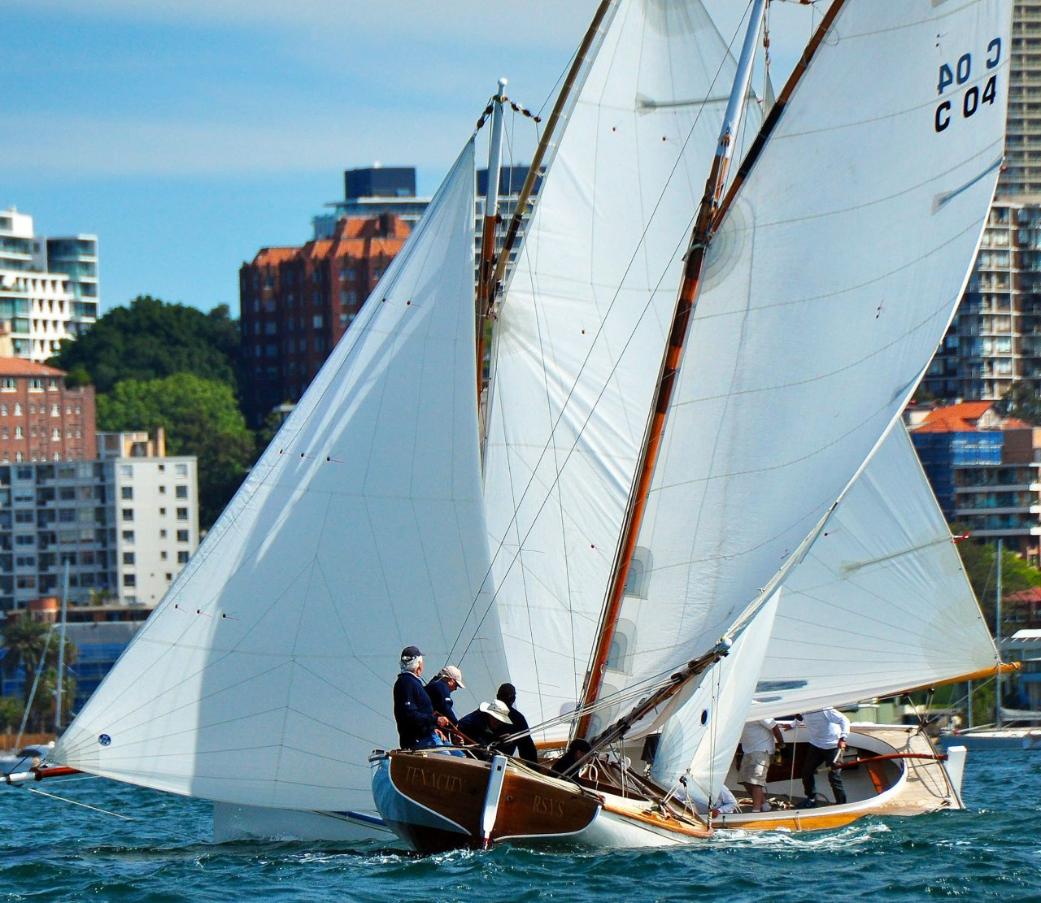 October 10, 2017
Event: Couta Week 2017, October 6-15, 2017 involving three NSW yacht clubs and incorporating three Sydney Harbour events plus the Wattle Cup/Couta Boat Nationals on Pittwater on the final weekend
NSW Couta Boats are among the placegetters in individual races, but it’s the Sorrento crews at the top of the tree in the Sydney Harbour Couta Boat Series combined results from the Thistle Cup, Muriel Trophy and Sunday’s spectacular 95-strong Gaffer’s Day fleet.
Four races into Couta Week 2017 and the Victorians are oiled up and flexing as the class prepares for the first Australian title to be held outside their state this weekend, October 14-15. Seems they have no intention of letting the NSW drought of national champions be broken, even though the Sorrento crews find themselves in less familiar waters.
This is Mitchell’s fifth trip to Sydney in six years and speaking on the impending CBA Nationals he reckons “we’ll be up there, though you never really know with Pittwater. We’ve come up from Melbourne to take every line honours in every race and if the handicap results go our way that’s a bonus. Rhapsody is probably rated tenth in the fleet in terms of speed but we sail it well, to beat the lighter, faster and more expensive boats.”
Second in the Gaffer’s Day race and the best-placed NSW boat in the series in fourth, Maurice Drent’s Emily, is one of the Coutas built from the original fishing boat design. Helm and tactician Bob Fowler said “Sunday’s building NNE breeze and washing machine” conditions suited the heavier boat, the extra weight providing stability in the choppy waters. “There’s a huge difference in how weight is distributed between the heritage Coutas and those built purely for racing.”
Prime Minister Malcolm Turnbull was aboard the Couta Boat Rob Roy he co-owns, and back at the host Sydney Amateur Sailing Club he agreed to present the Gaffer’s Day trophies.
According to SASC Rear Commodore and chairman of the organising committee, Peter Scott, the Kelpie Trophy is awarded for “gracing and racing”, and following the Gaffer’s Day race luminaries of the classic boat world, including Bill Gale, Sir James Hardy and Merrin Maple-Brown, selected Matt Brooks’ stunning S&S 52 Dorade.
Prime Minister Malcolm Turnbull and trophy winners Dorade (Bermudian 1 PurHC Division) from the New York Yacht Club at the host club SASC - photo by Bob Fowler
Dorade, designed in 1929 by Olin Stephens, on Sydney Harbour last weekend - from Dorade facebook page (Before taking on the 628-nautical mile Rolex Sydney Hobart Race in December, the “Dorade Down Under” team will head to New South Wales in October for the Bass Island Race and to Sydney in November for the Bird Island Race. )
A new Gaffer’s Day trophy called the Classic Cup was awarded to Rana’s young skipper Peter Langman, the shipwright given the task of completing the restoration of the 1913-built AC Barber design during his final apprenticeship year. It was also his 21st birthday present, gifted by another classic boat tragic, dad Sean Langman.
Peter Langman with Classic Cup trophy and Australia's PM,The Hon. Malcolm Turnbull- photo by John Jeremy SASC
The Couta fleet is making its way north to Pittwater for the second half of the itinerary with a series of informal races and soirees put together by the NSW chapter before the pinnacle, the CBA Nationals and Wattle Cup October this weekend out of the Avalon Sailing Club.
Couta Series results
Muriel Trophy results thanks to the Sydney Amateurs Sailing Club, congratulations to the placegetters Couta-Tah (Andrew McMillan), Sylvia (Larry Eastwood) and Georgia (Jeffrey Richardson).
Thistle Cup, RPEYC
Gaffer’s Day scratch results
Check the Facebook page for more videos and images of the Sydney Harbour events.
Key dates - Pittwater
Saturday 14 October CBA Nationals / Wattle Cup. ASC, format 3 windward/ leeward races
Sunday 15 October CBA Nationals / Wattle Cup. ASC, format 2 island passage races
By Lisa Ratcliff 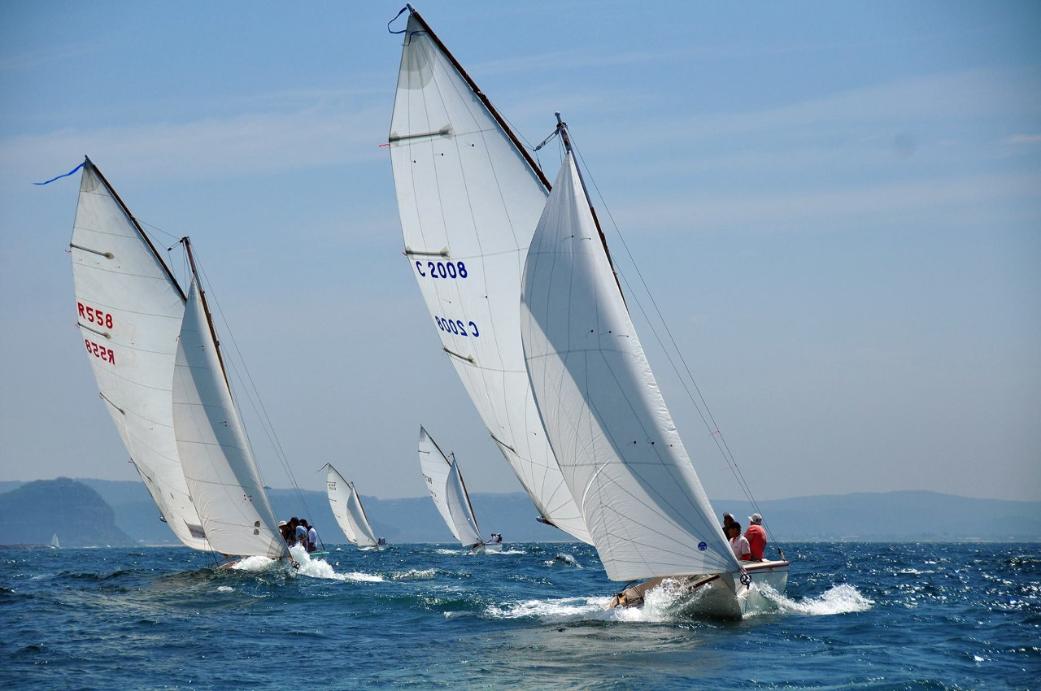 Couta delivery from Pittwater to the harbour - photo by Bob Fowler 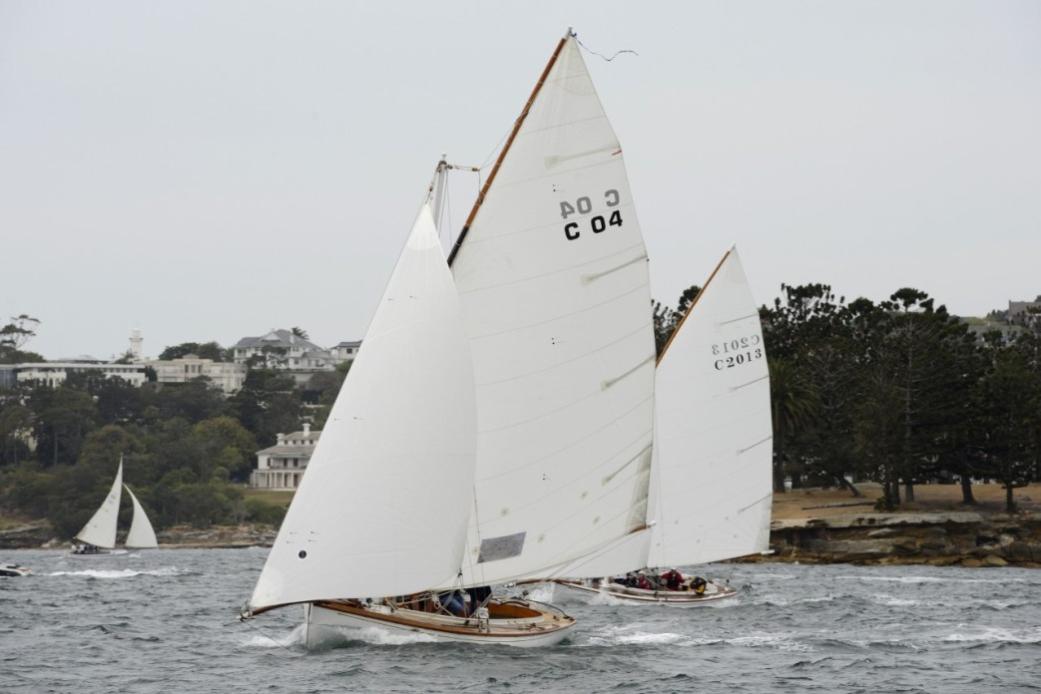