This week a few photos of an eastern grey kangaroo and joey taken during our school holidays. This pair were part of a female mob of around 20 mums and bubs that live in Western Sydney, on Cumberland Plain Woodlands and are what we at Pittwater Online News call 'Urban Kangaroos' because they live in the remaining patches of bushland in urban areas. Fortunately, where this pair live, hundreds of hectares have been permanently set aside by those who developed this housing estate to ensure they can continue to thrive. 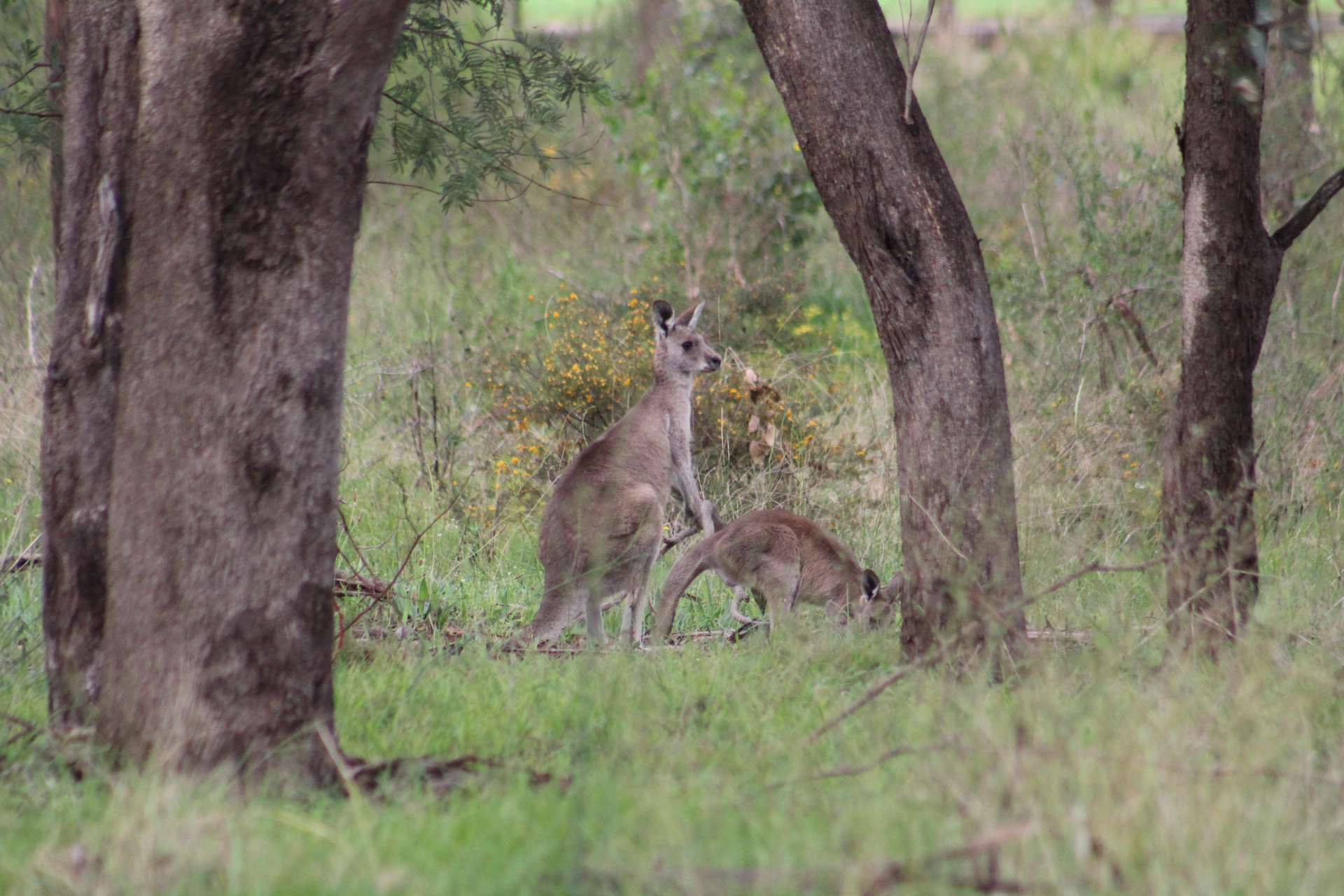 The eastern grey kangaroo (Macropus giganteus) is a marsupial found in the eastern third of Australia, with a population of several million. It is also known as the great grey kangaroo and the forester kangaroo.

The eastern grey kangaroo is the second largest and heaviest living marsupial and native land mammal in Australia. An adult male will commonly weigh around 50 to 66 kg (110 to 146 lb) whereas females commonly weigh around 17 to 40 kg (37 to 88 lb). They have a powerful tail that is over 1 m long in adult males. Large males of this species are more heavily built and muscled than the lankier red kangaroo and can occasionally exceed normal dimensions. One of these, shot in eastern Tasmania weighed 82 kg (181 lb), with a 2.64 m (8.7 ft) total length from nose to tail (possibly along the curves). The largest known specimen, examined by Lydekker, had a weight of 91 kg (201 lb) and measured 2.92 m (9.6 ft) along the curves. When the skin of this specimen was measured it had a "flat" length of 2.49 m (8.2 ft).

The eastern grey is easy to recognise: its soft grey coat is distinctive, and it is usually found in moister, more fertile areas than the red. Red kangaroos, though sometimes grey-blue in colour, have a totally different face than eastern grey kangaroos. Red kangaroos have distinctive markings in black and white beside their muzzles and along the sides of their face. Eastern grey kangaroos do not have these markings, and their eyes seem large and wide open. 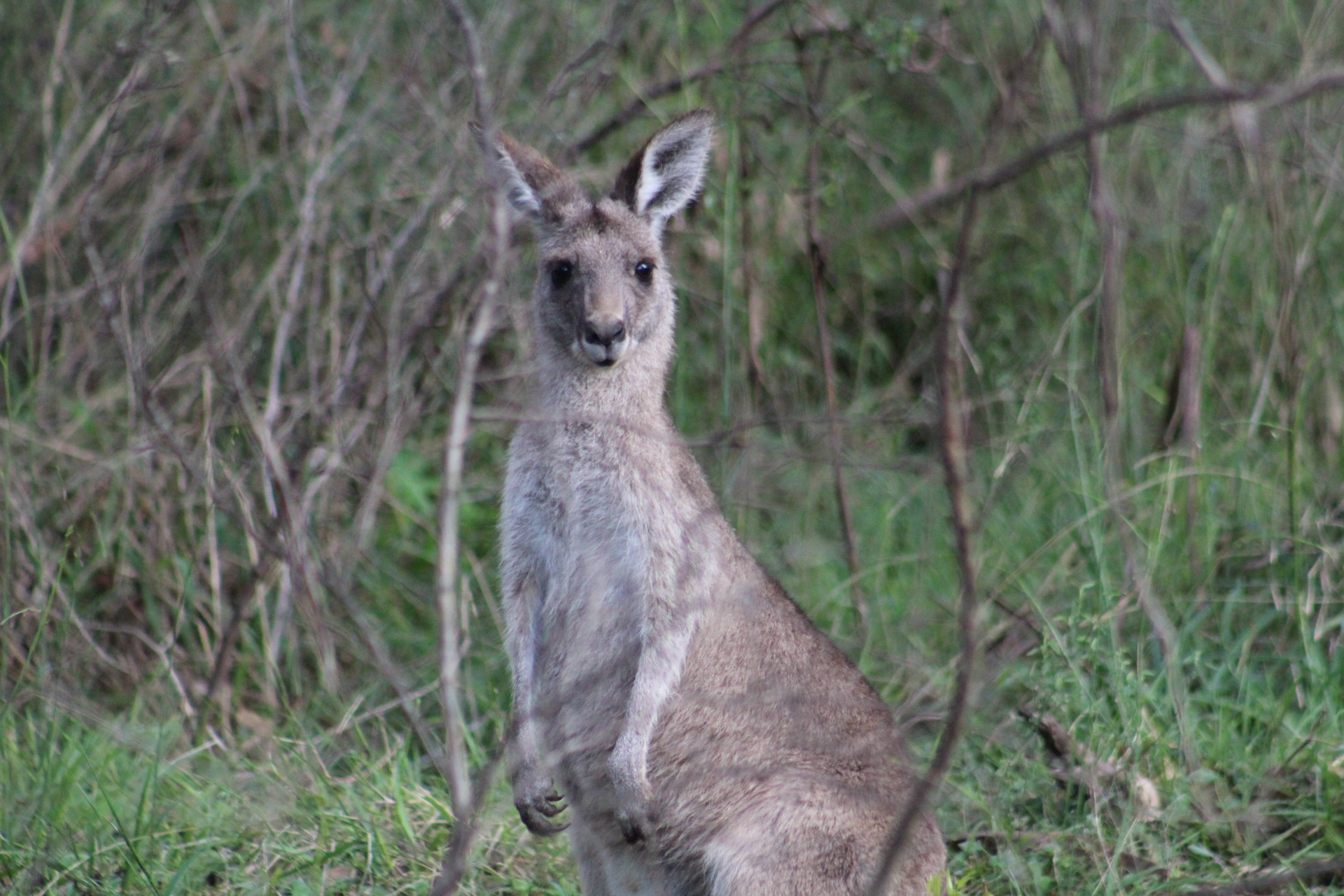 Where their ranges overlap, it is much more difficult to distinguish between eastern grey and western grey kangaroos, which are closely related. They have a very similar body and facial structure, and their muzzles are fully covered with fine hair (though that is not obvious at a distance, their noses do look noticeably different from the noses of reds and wallaroos). The eastern grey's colouration is a light-coloured grey or brownish-grey, with a lighter silver or cream, sometimes nearly white, belly. The western grey is a dark dusty brown colour, with more contrast especially around the head.

The highest ever recorded speed of any kangaroo was 64 kilometres per hour (40 mph) set by a large female eastern grey kangaroo. That's fast! These are the only known animals that move by bounding, or 'hopping'.

Sometimes, when out in the bush up on the north coast, you can hear a soft 'thump, thump, thump' as they bound across the grassy forest floor, even before you see them. This is a lovely sound. 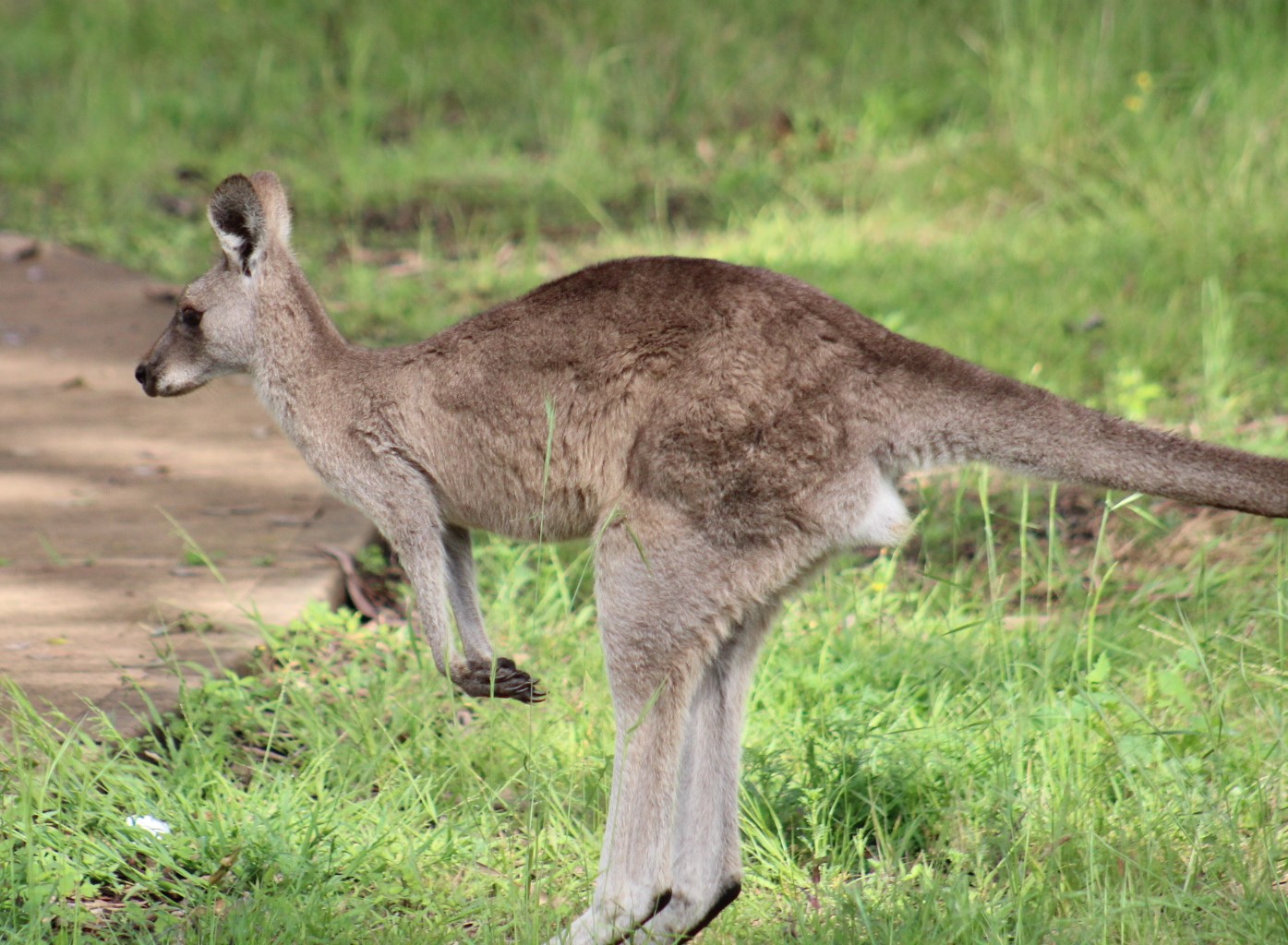 Although the red is better known, the eastern grey is the kangaroo most often encountered in Australia, due to its adaptability. It inhabits coastal areas, woodlands, sub-tropical forests, mountain forests, and inland scrubs. There are even some in our area.

Like all kangaroos, it is mainly nocturnal and is seen early in the morning, or as the light starts to fade in the evening. In the middle of the day, these kangaroos will rest in the cover of the woodlands and eat there but then come out in the open to feed on the grasslands in large numbers. The eastern grey kangaroo is predominantly a grazer, eating a wide variety of grasses, whereas some other species (e.g. the red kangaroo) include significant amounts of shrubs in their diet. 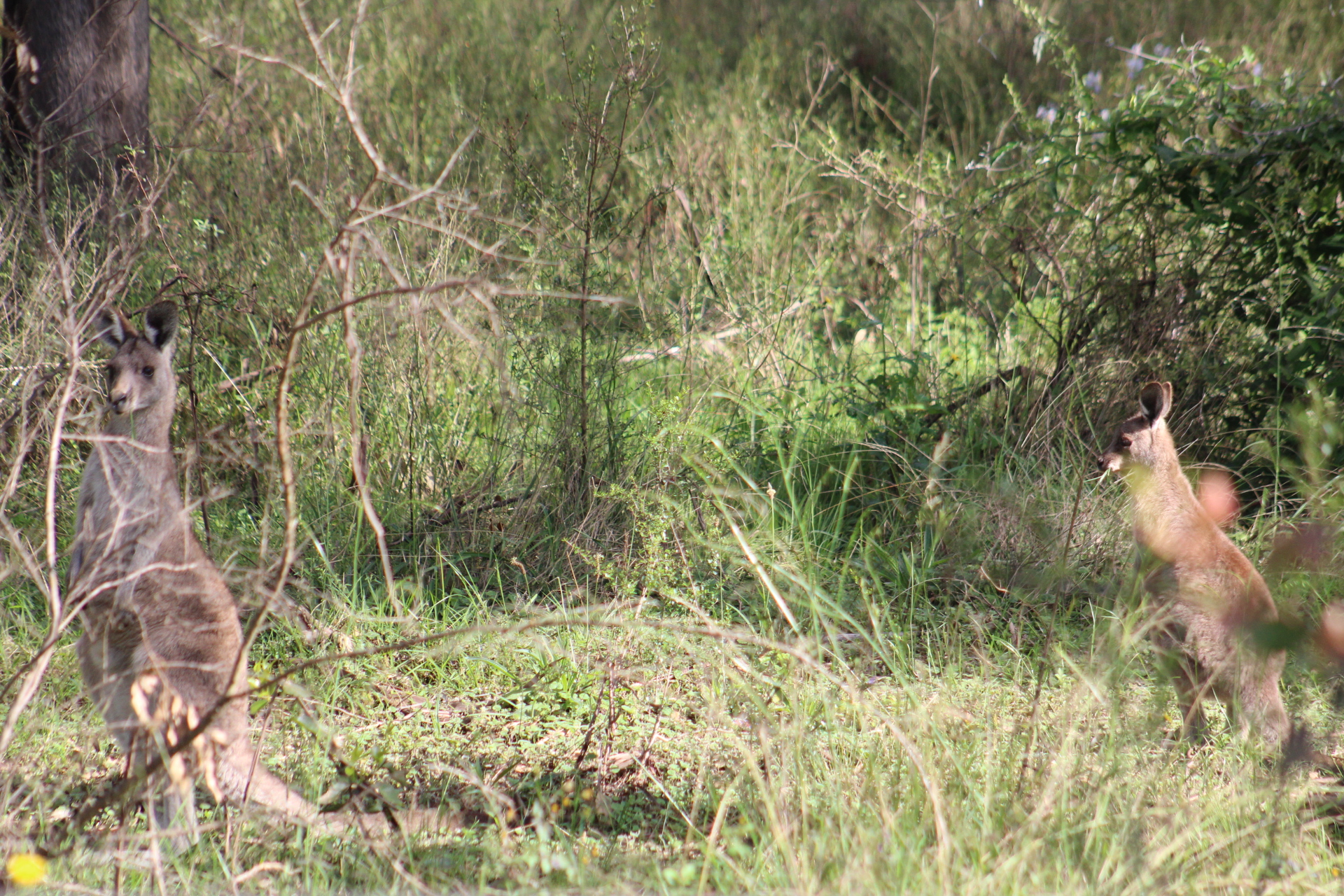 Eastern grey kangaroos are gregarious and form open-membership groups. The groups contain an average of three individuals. Smaller groups join together to graze in preferred foraging areas, and to rest in large groups around the middle of the day. They exist in a dominance hierarchy and the dominant individuals gain access to better sources of food and areas of shade. However, kangaroos are not territorial. Eastern grey kangaroos adjust their behaviour in relation to the risk of predation with reproductive females, individuals on the periphery of the group and individuals in groups far from cover being the most vigilant. Vigilance in individual kangaroos does not seem to significantly decrease when the size of the group increases. The open membership of the group allows more kangaroos to join and thus provide more buffers against predators.

Females may form strong kinship bonds with their relatives. Females with living female relatives have a greater chance of reproducing. Most kangaroo births occur during the summer. It's worth noting that Eastern grey kangaroos are obligate breeders in that they can only reproduce in one kind of habitat.

The female eastern grey kangaroo is usually permanently pregnant except on the day she gives birth; however, she has the ability to freeze the development of an embryo until the previous joey is able to leave the pouch. This is known as embryonic diapause, and will occur in times of drought and in areas with poor food sources.

The composition of the milk produced by the mother varies according to the needs of the joey. In addition, the mother is able to produce two different kinds of milk simultaneously for the newborn and the older joey still in the pouch. Unusually, during a dry period, males will not produce sperm, and females will only conceive if there has been enough rain to produce a large quantity of green vegetation.[14] Females take care of the young without any assistance from the males. The joeys are heavily reliant on their mothers for about 550 days, which is when they are weaned.

Where does the word 'kangaroo' come from?

In 1898, anthropologist Walter Roth wrote to the editors of The Australasian to set the record straight: “kangaroo,” he said, is clearly derived from “gangurru,” meaning “black kangaroo” in the language of the Guugu Yimidhirr people of north Queensland. It’s their name for the eastern grey kangaroo. But lexicographers took no note of this until 1972, when linguistic anthropologist John Haviland began his work on Guugu Yimidhirr and was able to confirm the “gangurru” etymology.

Kangaroos are well-known for their calm and peaceful nature and do not like to get involved in any fight unless they are threatened.

There have been lots of stories and poems written about kangaroos - this is one is short but sweet:

'Twas in the gloomy Winter, when I walked about the zoo.;

The creatures had the blues, except the leaping kangaroo.

"How can you be so cheerful at this dismal time?" I cried.

"It's always spring with me, my friend," the kangaroo replied. 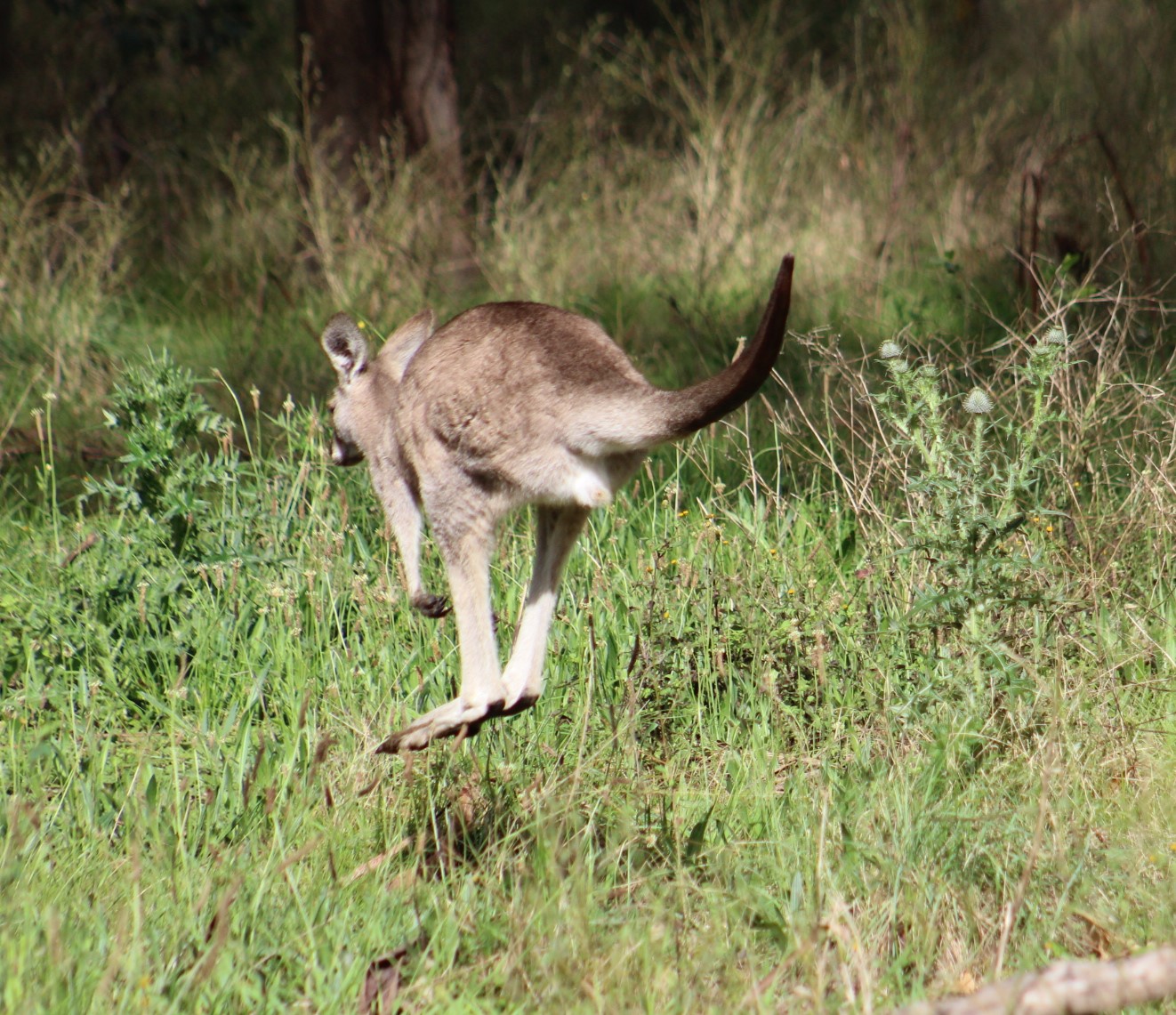