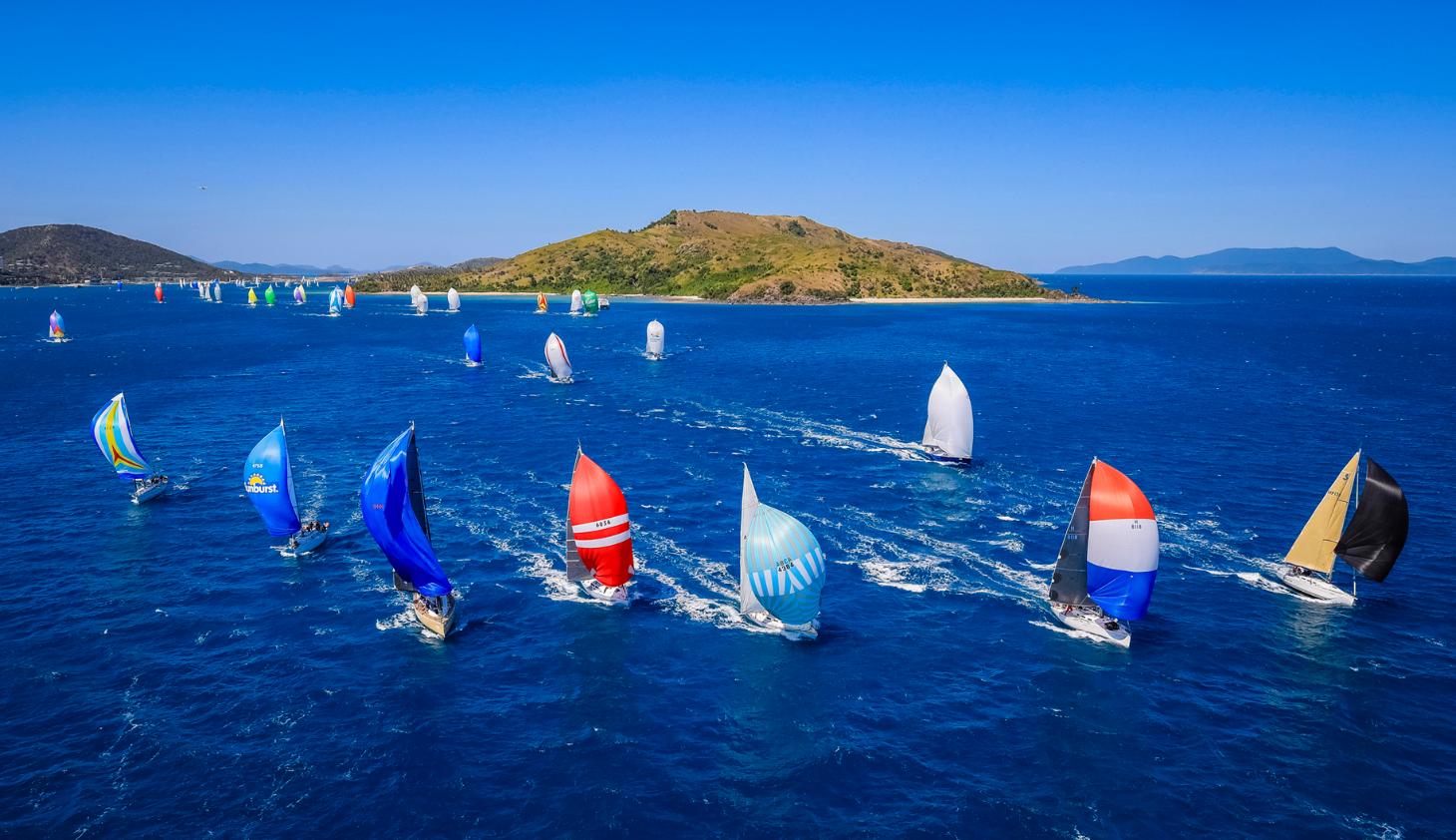 Sailors will travel vast distances and boats will be delivered by road and water from far-reaching ports to be part of Australia’s premier destination regatta, Hamilton Island Race Week, from August 20-27.

This year is the third attempt to join the Race Week fleet for David and Michelle Parsons from Seacliff Brighton Yacht Club in South Australia. They’ll tow their Sonata 7 trailer sailer 2,500kms north in company with other Sonata owners, stopping at pre-arranged locations. “We only race now and then back home and expect to learn from the Sonata people, who are very enthusiastic, while up north,” David said.

Seven IRC 52s will battle for the silverware in both the Rating Series and Australian Yachting Championship including New Zealand built Caro, a Botin 52 launched in 2021 for offshore sailing and a Race Week first timer.

The original plan was for Caro to contest the 2020 Rolex Sydney Hobart as its first event however COVID-19 delayed the build by six months. After a brief sea trial in Auckland, Caro was shipped to Europe just in time for the Rolex Middle Sea Race followed by the Transatlantic Race to the Caribbean for Voile St Barts.

“Hamilton Island Race Week is an event we have always wanted to do,” said Caro’s project manager Justin Ferris. “Location, sun, wind and racing against the best IRC 52 fleet in the world is an unmissable opportunity.”

If the trade winds kick up, Shaun Carroll’s ORMA 60 Rex, formerly Team Vodafone, will make an impressive sight leading the Multihull Racing Class as it tears around the spectacular island courses at 25 knots plus of boat speed.

All the while crews will be keeping an eye out for mother Humpback whales and their calves playing around in the waters adjacent to Hamilton Island.

Longstanding regatta director Denis Thompson and his team of 23 race officials are equally excited for the sailing community’s overdue gathering away from Sydney’s never-ending rain and chilly winter in the southern states.

Latest news from regatta director includes the creation of a Super 40 class for the owners of planing, asymmetric boats in the 35’ to 42’ size range such as Ray Roberts’ high-performance Botin 40 called Team Hollywood and a number of MC38s, which were last at Race Week for their Australian Class Championship back in 2014.

“The capacity fleet and impressive onshore line up shows that even after a two year hiatus, Hamilton Island Race Week continues to stand as Australia’s premier offshore regatta and undoubtedly one of the best sailing events in the world. We are looking forward to welcoming back the sailing fraternity and their family and friends for some great competition and camaraderie on and off the water.

“This year Hamilton Island will also play host to the Australian Yachting Championships which is the sport’s national authority-sanctioned series and 52 of the 225 entrants have signed up for this prestigious event which will run in conjunction with the Hamilton Island Race Week Rating Class.

“The Race Week social calendar is as varied as the offshore action, with highlights including a Paspaley luncheon at qualia and a series of exclusive lunches and dinners across the island with visiting top chefs Peter Gilmore, Paul Carmichael, Analiese Gregory and Will Cowper.”

SKIN CHECKS ARE BACK

Scott Maggs (formerly Jimmy Niggles) and his skin check clinic will return to Hamilton Island for the fifth year to provide free, quick and easy skin checks conducted by certified nurse dermoscopists. Be sure to book your session well in advance at skincheckchampions.com/hirw

All information about this year’s Hamilton Island Race Week is on the website: www.hamiltonislandraceweek.com.au