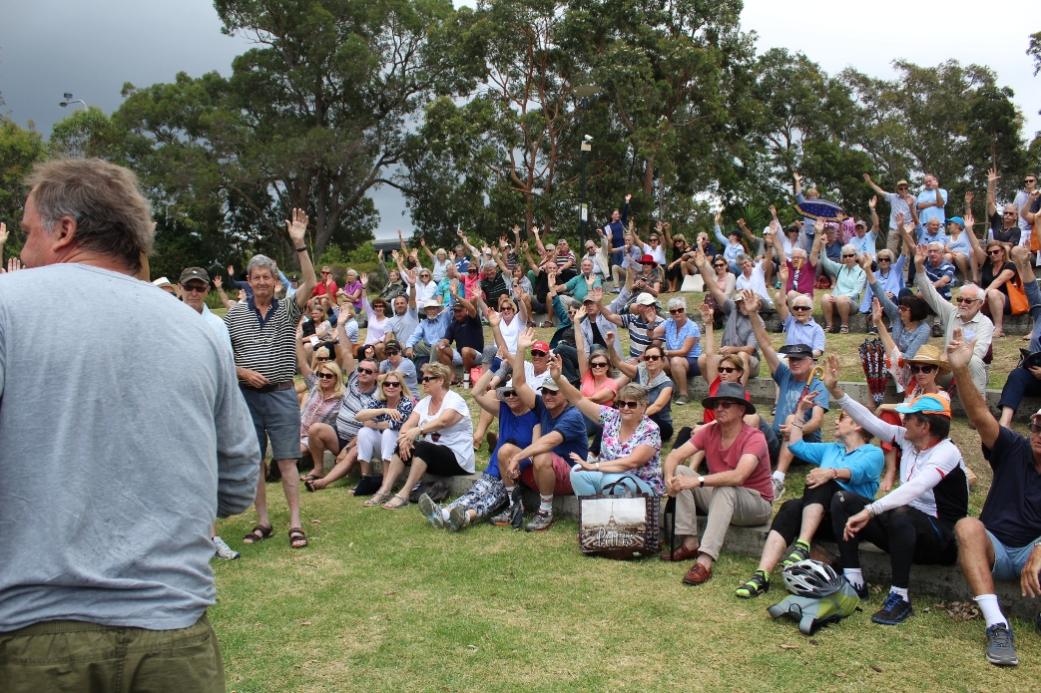 The Mona Vale Rally on November 20, 2016 went ahead despite an announcement that week of 'further community consultations' and the then current Mona Vale Place Plan would be placed on hold until after elected representatives were in place and in charge of an amalgamated Pittwater

Who is listening to us? Is the age of democracy, activism and advocacy over?

I’ve been reflecting lately on change and on the role of community leadership and what well managed change can look like. Change can be sudden and disruptive or slow and incremental. You can fight it or just go with the flow. Its outcomes can range from transformative to disastrous depending on timing and impact on the individual, community, environment. It is complex and when a change process is underway three things are VERY important. Consultation, Communication, Consistency.

Good consultation requires open, constructive two-way conversations between stakeholders supported by a complete set of facts. Consultation should involve listening and talking, reflecting and synthesising and informed negotiation through exchange.

Consistency is achieved by a well articulated approach, a strategy, treatment of stakeholders and sticking to the plan.

Effective leaders listen to their communities and are able to then act on their behalf to influence outcomes for them.

Each day as I commute to work on the other side of the city, I travel past the new hospital site on Warringah Road and past the light rail on ANZAC parade, both ugly, both destructive, both pushed through without listening to the public concerns and both changing by the minute and manifesting larger and more disruptive than ever communicated. I listen to the radio on the journey, in and back, hearing complaints about lock out laws and local council amalgamations, WestConnex, changes to laws around Local Govt. Act, Crown Lands Act, Environmental Protection,  ….  I don't think I have ever heard so much dismay, disbelief, and frustrated helplessness ever. I consider ‘why?’

After some thought I view it is because the people and communities of NSW feel they no longer have a voice that is listened to and they are change fatigued. This seems to be because the avenues they usually take their voice to have been taken away or are no longer listening – consultation is shallow, curated, or only paid lip service and ignored in any case, particularly if outcomes do not align with a preconceived plan. All the traditional advocacy methods appear ineffective, protesting, petitions and marches. Social Media is difficult to target and leverage for anything serious. On the peninsular we have been particularly let down by our State Government representatives who have consistently ignored community sentiment over increased density of development, Mona Vale Hospital downgrading and Local Government Amalgamations to name a few.

The last removed the community voice, which was represented by dedicated and locally connected councillors, replacing it with a single administrator. If you ever attend or watch the council meetings online for which he sets the agenda, chairs the meeting and is the only voter, you will see members of our communities trying to get local concerns heard and being glibly, and oft tersely, cut short by someone who neither lives in nor understands our local communities. This gentleman recently sacked me from a role on the LRC of the newly formed council. One I had not chosen to apply for, but he personally asked me to fill. I took on the role in a positive spirit hoping to represent the community who elected me in some way in the new beast. When I called to ask why I was sacked; I thought it may have been because I had questioned the unclear process through which the Strategic Reference Groups were selected – something a number of community members had raised concerns me about, I was very rudely spoken to then hung up on. Upon further correspondence he claims that I have attended less than half the meetings. This is untrue, I don't always sign in. He also chided me for choosing to attend, and present a speech and award at, a school speech night and for opening a local art exhibition (ironically sponsored by the council)  - both important community events and activities which as a community leader, educator and advocate / supporter of creative industries I see much greater value in than attending a meeting where we are talked at, rather than consulted.

Our community deserves so much better representation than it is getting right now.  It also deserves to be heard. I’m interested to hear any fresh ideas on how we as a community can do this.