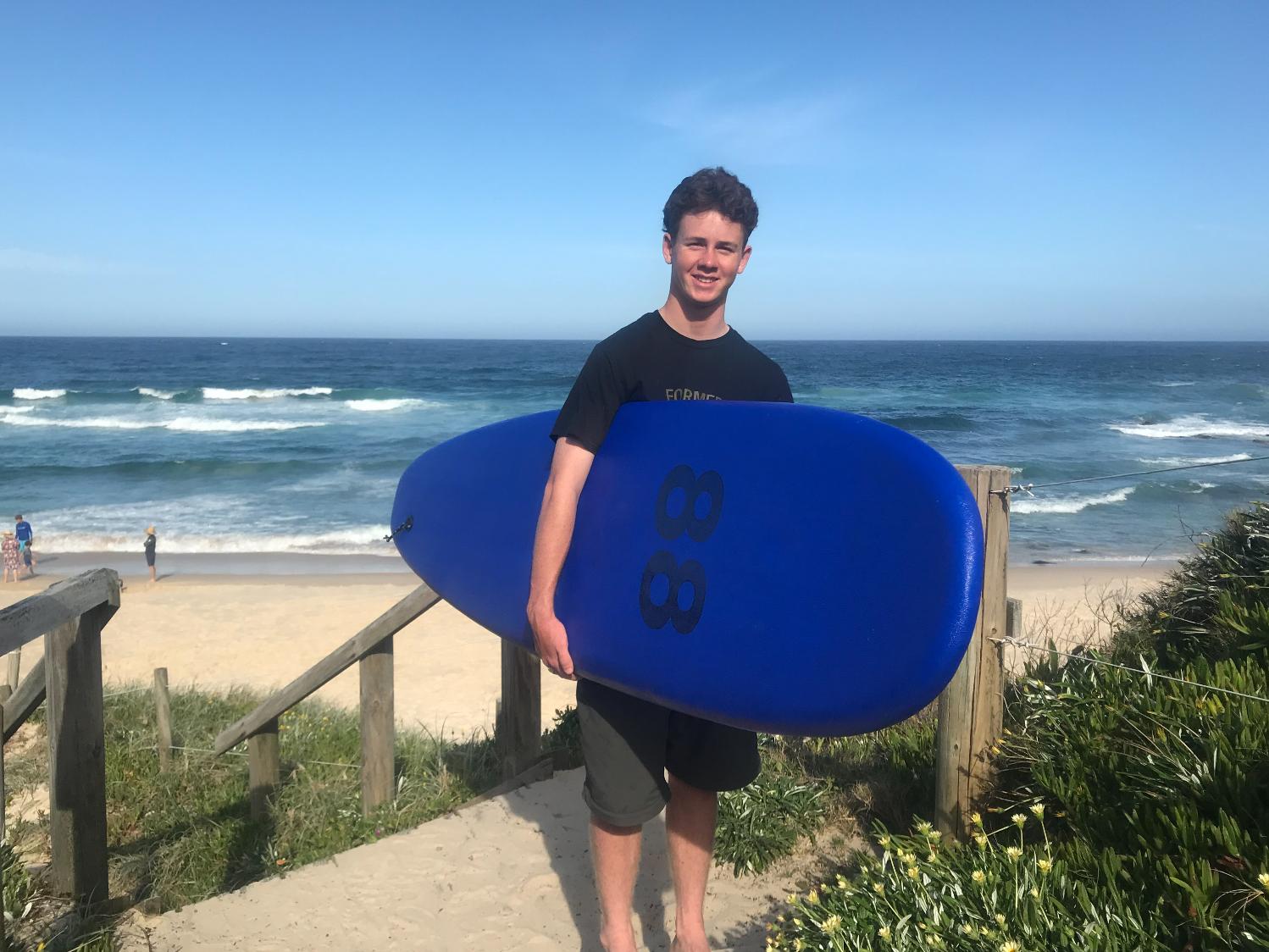 “I didn’t think anyone was coming.”

Lachlan Arnold says it chills him to the bone to recall those words, spoken by the teenage girl lying on the beach waiting for the Ambulance to arrive.

Luckily for the young schoolie from Taree, Lachlan and his son Max happened to be on the unpatrolled Boomerang Beach that day and had the courage and the skills to save her life, reaching the drowning girl with just seconds to spare.

Max Arnold is just 16 years-old but has been involved with his local surf club since he was a six-year old Nipper and is a member of North Avalon Surfriders Association. Completing his Bronze Medallion just a year ago, he has been actively patrolling at Avalon Beach, yet his deep understanding of the ocean and ability to act quickly under pressure is a tribute to himself, his club and his family.

On Thursday 26 November Max and his dad Lachie were surfing and enjoying the sunshine at the southern end of Boomerang Beach on the NSW lower-north coast. The beach is a popular tourist destination – even more so in 2020 with traditional schoolies destinations out of reach due to COVID-19 restrictions.

Lachlan recalls the beach being busy that day with people on the sand and in the water right along the unpatrolled 1500m stretch. 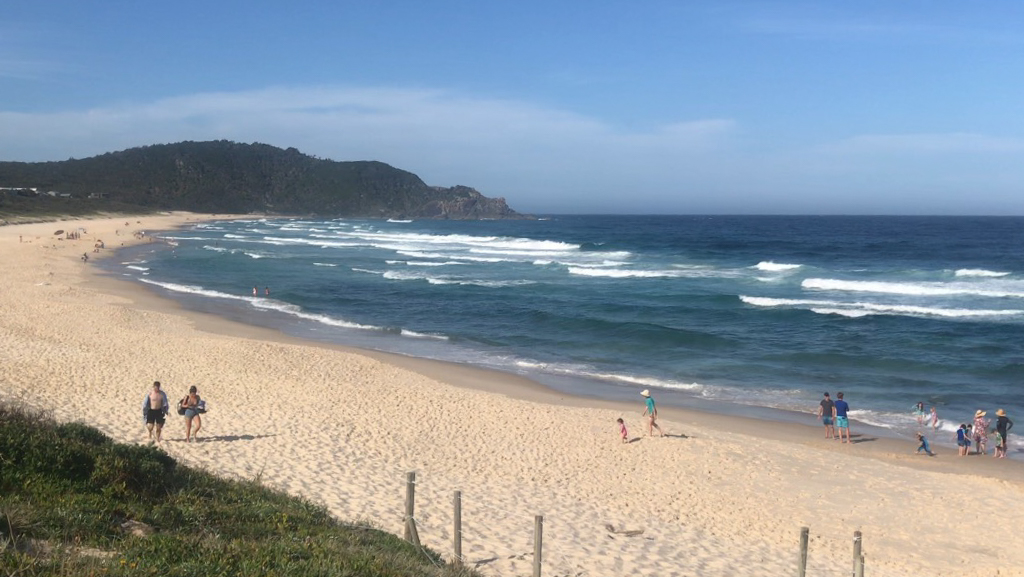 “We were sitting on the beach and this young guy came running up yelling, ‘my girlfriend has been pulled out in a rip, can you help?’”.

When the boy pointed out his girlfriend, Lachlan was shocked to see she was over 150 metres from shore. In the rough conditions, the boyfriend recognised he was unable to help by attempting to rescue her himself.

“We watched as he ran towards us, asking people if they could help as he made his way down the beach,” said Lachlan “but no one he asked could help.”

Lachlan and Max were staying at a house just a couple of hundred metres from where they were sitting on the beach. Immediately Max ran up to the house to grab a foam surfboard. A strong swimmer and surf lifesaver himself, Lachlan began to swim out towards the girl.

“Max and I got to the girl at about the same time. I was holding her up in the water and she was gone. She was probably 30 seconds from going under,” said Lachlan. “She was in the worst condition I’d ever seen anyone out in the water.”

Max had done an incredible job to sprint to get the board and complete the long paddle out so quickly to meet his dad. The pair were able to get the girl onto the board and Lachlan began paddling the girl back to shore while Max swam alongside.

“Miraculously we caught this wave that took us all the way to the beach – it really was the magic wave and the most welcome one I’ve ever caught,” recalls Lachlan.

Back on shore, the girl was completely exhausted so Max and Lachlan carried her up the beach where they called an Ambulance and performed checks of her condition.

“She could barely talk,” said Lachlan “and she said to me when she got her breath back, that she felt like she was breathing water.”

The proud dad said he had complete confidence in his young son throughout the rescue effort.  “He knew exactly what to do and when to do it. He’s only 16 and he was just so calm and just having done his Bronze Medallion, it’s amazing.”

Lachlan said the surf life saving training and the family’s love of the ocean meant he wasn’t once worried for his son’s safety. “Max paddled out on the board and the surf was rough, but I didn’t once think he couldn’t do it,” he said.

“I know he’s a strong swimmer and a good lifesaver. He’s done all the right training. I think it’s a really powerful thing that I was able to bring the girl in on the board and not have to worry about him still out there.”

A proud dad himself, Dave Roberts has been Max’s Nippers Age Manager since Under 6s at Avalon Beach SLSC and has been part of his journey right through the surf club. He says it was quite emotional and very humbling knowing the skills and knowledge he and fellow trainer Bernadette Mckay have imparted to Max have given a family back their daughter.

“It was amazing hearing about the successful rescue by Max and Lachie, we’re all very proud and got goosebumps hearing the story,” said Dave. “Bernie and I realised all the hours and years we’ve put into developing these kids has paid off.

“When Max was a young kid he wasn’t that strong in the water, but years in Nippers with a group of now life-long mates, he’s turned into a really strong waterman on all craft, just like his dad. He’s so competent out there and it’s no surprise he was able to handle this rescue like he did with maturity beyond his years.”

Post the dramatic rescue, Lachlan Arnold has quietly contemplated just how valuable his family’s involvement in surf life saving has been.

“I think spending much of our lives at the beach just paid off,” he said. “It’s not just about patrolling between the red and yellow flags, it’s lifesavers on holidays like us, who can be there to help when it’s needed – on or off the beach.

It also brought home to Lachlan with a thump, how easy it is for people to get into serious strife at unpatrolled locations.

“Along with there being no one around who had the skills to help, there was no access to a defibrillator or oxygen because the nearest surf club is a beach away to the north.

“You don’t have to go too far to realise that there is no one to help.”