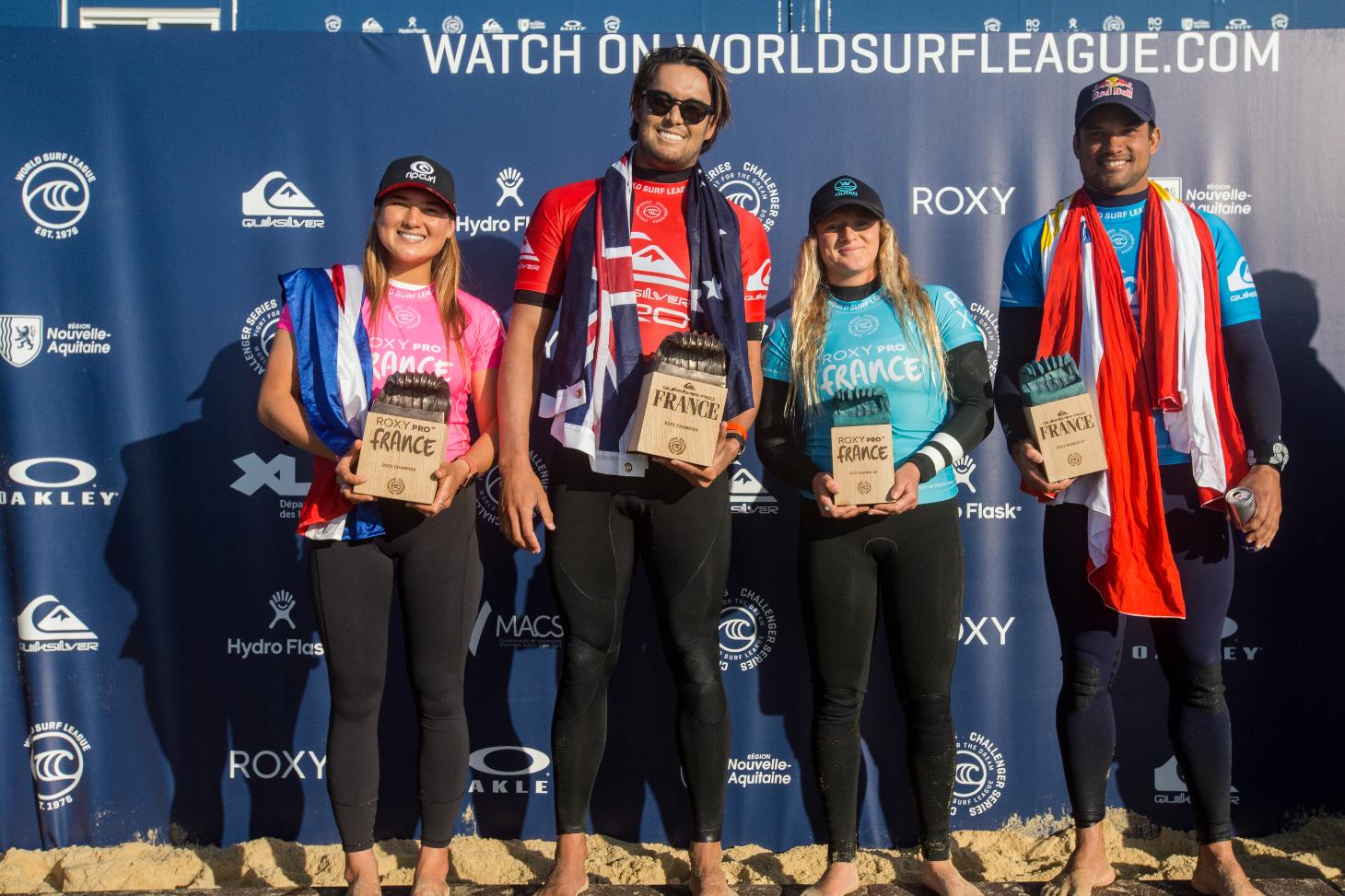 Stop No. 3 of 4 on the 2021 World Surf League (WSL) Challenger Series, the Quiksilver and ROXY Pro France had to negotiate through a very tricky forecast and timed competition perfectly to finish in classic French beachbreak conditions to crown the event winners in front of capacity crowds once again.

“I’m so happy to win and to have all the support from my amazing family and friends it’s a really special moment for me,” Hennessy stated. “India is a great competitor, I’m so proud of her and I believe she deserves to be at the top. It was definitely back-to-back and the waves totally changed and I was grateful I got that wave at the end.”

After two seasons on the Championship Tour, Hennessy failed to retain her spot at the end of the 2021 season but today took a big step forward in her requalifying effort for next year. Her path to the Final was flawless as she defeated all the form surfers of the moment to claim her first win at this level of competition. Coming into France ranked second on the Challenger Series after a 5th place in Portugal, Hennessy moved into 1st overtaking Gabriela Bryan (HAW) who had an uncharacteristic first-round exit in France.

In the Final, Hennessy swung first with a quick two-turn combo and a 6.83 to jump in an early lead and apply pressure on Robinson. The next exchange happened on smaller waves that didn’t offer quite as much wall to work with and both surfers walked away with an average number for their effort, the Australian with a slight advantage.

Under priority, Hennessy managed to find a couple of inside lefts to further improve her lead while her opponent was unable to position herself in the shifting sets out the back. On the 5-minute mark, Robinson finally found herself on a bomb and tagged it a number of times on her backhand for a 7.83 to turn the heat. But the Costa Rican answered right away with two massive turns for an excellent 8.40 to seal the deal on her ROXY Pro France victory.

Jan Juc surfer India Robinson’s runner-up today marks her career-best result so far. The Australian has been building momentum since the series started at the US Open and posted a huge statement today. The result will propel her into qualifying discussions in the 4th spot on the rankings before the final stop of the season.

“I’m super stoked on making my first Final at the Challenger Series level,” Robinson said. “I knew going up against Brisa was going to be tough, but ultimately my goal is to make the CT so I better get used to it. I’m super excited to go to Haleiwa next, where I’m from we have a lot of waves and power so I feel like I’m going to be comfortable there. The whole Aussie crew we’re such a close bunch and to see Connor win was really cool!”

In the Men’s Final, a pretty even first half of the heat saw Michel Bourez (FRA) and Connor O'Leary (AUS) exchange similar scores on the rights and lefts of Culs Nus with an advantage for the Australian. O’Leary pushed the Tahitian’s requirement a touch higher with a good little left he punctuated with a clean straight air midway through the heat.

Unfortunately for the Frenchman, the rights that gave him his best scores so far had disappeared and the lefts clearly favoured O’Leary’s forehand attack and air game. As the clock ran down, Bourez was unable to fight back and O’Leary walked away with the win in the Quiksilver Pro France.

“I feel amazing, it’s been a huge day,” O’Leary said. “I’m literally on top of the world right now and cramping up, can’t wait to have a beer! I’ll just really enjoy the afternoon with the lads, they’ve been incredibly supportive so we’ll try to keep it up and finish the year strong!”

After a terrible start both in California and Portugal, the Australian from Cronulla needed something big in France and delivered with his first major win since Ballito in 2016. Today’s 10,000 points moved him up 94 spots into 6th on the Challenger Series rankings and virtually within reach of a fourth season among the world’s best in 2022.

Connor O’Leary was one of seven impressive rookies who graduated to the Championship Tour in 2017. Of the bunch, he was easily the most unsung. During his journey to the top of the Qualifying Series rankings in 2016 the lanky goofyfooter from Cronulla, New South Wales, barely registered on other media’s radar. Not that that bothered the genial workhorse who grew up the son of two hardcore surfing parents.

His mother, Akemi, was a Japanese champion before moving to Australia. She met Connor’s dad, Finbar, at a pro event there in the late 80s. They taught Connor how to surf at the same breaks where Aussie surf legend Mark Occhilupo got his start.

Over the past few years, the tight-knit Cronulla community has been rallying around O’Leary’s climb. At the start of 2016, he was still putting in hours at his local surf shop, not because he needed the money, per se, but the satisfaction of helping others is something that drives him.

O’Leary actually prefers flying under the radar. It certainly worked for him in 2017, with his Quarterfinal appearance at Snapper and runner-up finish in Fiji leading him to his No. 13 spot on the Jeep Leaderboard. That year however proved a tough act to follow up and he failed to make the cut in 2018. Having made the move to Lennox Head O’Leary, in typical fashion, simply went back to basics.

He won two QS events in Australia and remained consistent if not spectacular for the remainder of the year. The end result was a CT spot in 2020 and a sense that he very much has unfinished business at surfing's top table.

Tahiti’s Michel Bourez (FRA) was in a similarly tough position coming ranked 108th before today. The Championship Tour veteran, a former winner on tour at Pipeline, Margaret River and Rio, grabbed the runner-up points to move into the Top 20 with one event remaining in Hawaii, a place where Bourez has performed exceptionally well in the past.

“Second place is good but first is always better,” Bourez said. “I’ve really tried my best and unfortunately it got a little tricky at the end there and he got the best of me. Connor’s one of the best surfers on tour and I want the best for him so I’m really happy for him. Hawaii and the good waves are coming so I’m really going to focus on that right now.”

Other big winners in France this week include Lucca Mesinas (PER), Joao Chianca (BRA) and Carlos Munoz (CRI) who all moved within the qualifying Top 12 currently. Semifinalist Mateus Herdy (BRA) got closer in 17th position, and Kanoa Igarashi (JPN) takes the rankings lead, but has already qualified via the CT.

In the women’s rankings, Sawyer Lindblad (USA) and Vahine Fierro (FRA) both move into the current Top 6 and Caitlin Simmers (USA) regains a little breathing room with her Semifinal finish in France that anchors her in 3rd on the rankings.

Narrabeen's Jordan Lawler advanced furthest. Jordy was eliminated in Heat 8 of Round 16 by Portugal's Frederico Morais, who won a spot in quarterfinals. Morais scored higher in his first three waves, while Jordan scored very low on the 9 waves he did take on. Lawler still clocked up 3,500 points for his efforts and finished 9th overall.

Dylan Moffat surfing during Round of 24 of the Quilsilver Pro France on October 22, 2021 in Hossegor, France. Credit: © WSL /  Poullenot

The Japanese surfer took full advantage of the jetski assist to surf as many waves as he possibly could and eventually found himself on two absolute bombs, amassing points for power carves in the committed sections of the rights on the North bank.

“I feel bad for the drivers actually, I took a lot of waves out there,” Igarashi said jokingly. “So thanks to these guys they’re definitely working the hardest today. This is France and we’re going to surf every kind of conditions in this event. I feel like in the past this has been my weakness and that’s why I’m here trying to work on it.”

Friday's waves were a solid six-to-eight foot surf at Culs Nus on the back of the storm front that hit the French coastline on Thursday. Kanoa was eliminated by Connor in the semi-finals.

Cooper Chapman was eliminated in Round of 96 - Heat 18 on Wednesday, October 20. He too put in a persistent effort, alike his work in Ericeira, Portugal earlier in October.

The experience of France will set these young former Narrabeen Sports High surfers up to confidently persist - to get to the gnarly end of the week's comp. shows their potential and their determination to go one better next time, and the time after that.

Cooper Chapman of Australia surfing during Round of 96 of the Quilsilver Pro France on October 20, 2021 in Hossegor, France. Credit: © WSL /  Poullenot

The final stop on the 2021 Challenger Series will bring some of the world’s best surfers to Haleiwa, Hawaii from November 26 - December 7, 2021.

For all results, photos, video highlights and press releases, log on to worldsurfleague.com.

Here are the current Men’s Top12 and Women’s Top 6 on the Challenger Series: 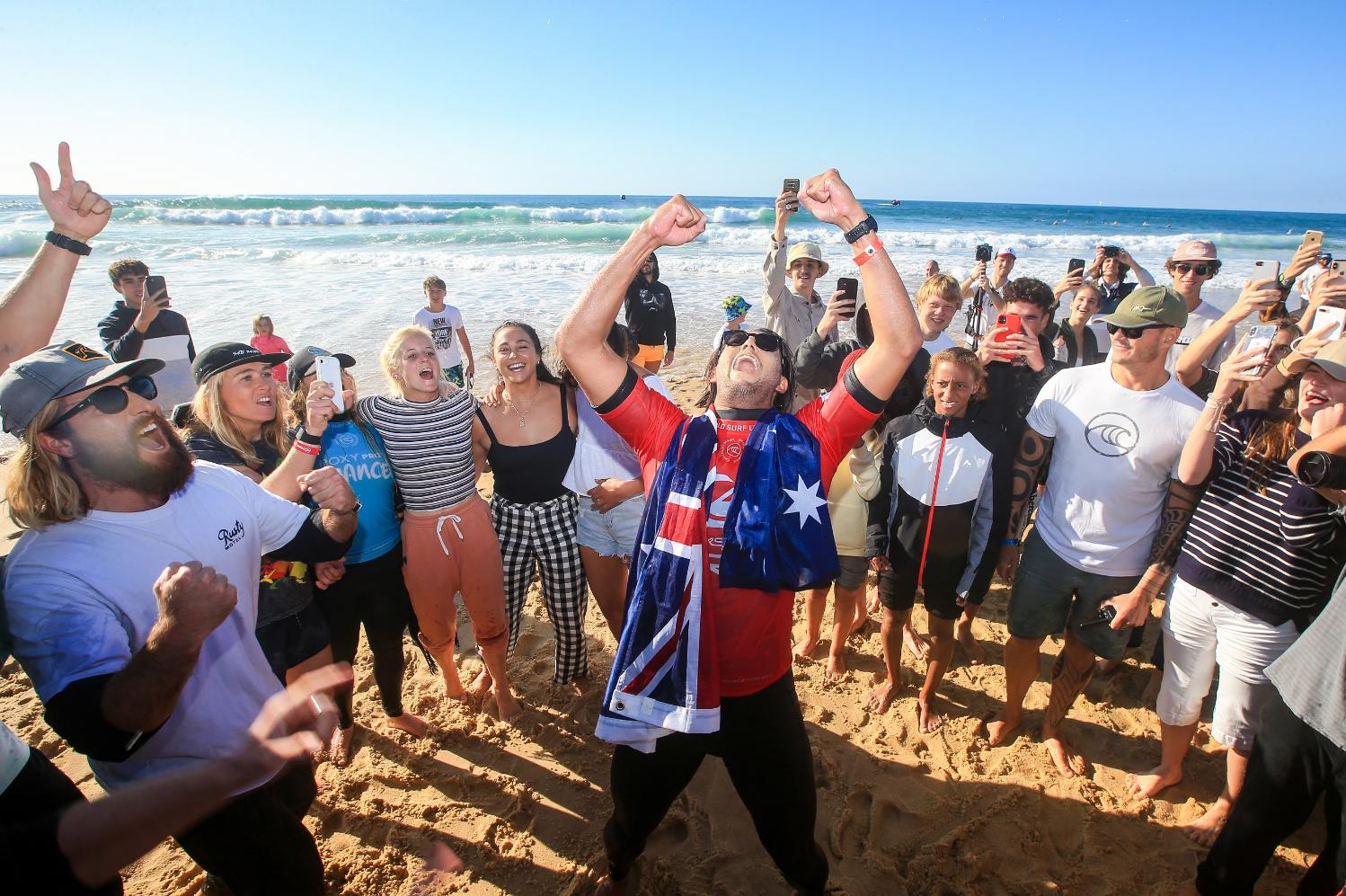