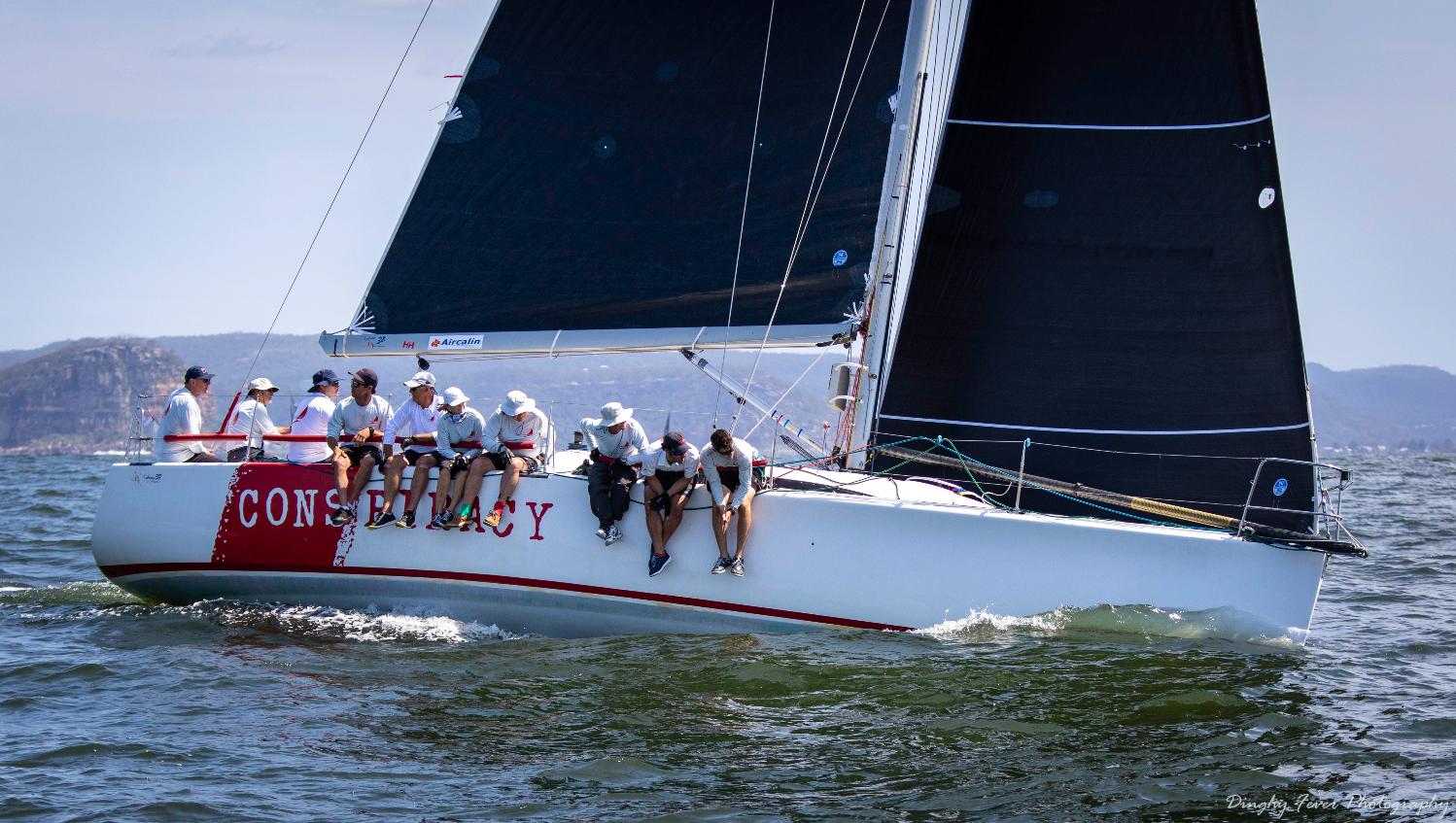 Class President Byford and Hudson, co-owners of Conspiracy, reeled off four wins, interspersed with a trio of second places and a third to outclass the opposition. They were relentless in their pursuit of carting off their first Sydney 38 One Design Australian Championship trophy.

The two finished third at the 2018 Australians and led the 2019 Championship, but let Outlaw slip through the net and ultimately finished second. No such mistake this time, they stayed focussed and resilient throughout, despite a couple of breakages and some very close finishes, with only seconds separating the top three at times.

Sorensen won Race 6, while Williams took out Races 1 and 4 and Greg and Wade Croak’s Challenge (Royal Motor Yacht Club Toronto) Race 7 to finish fourth on countback to Calibre. However, none could put a dent in Conspiracy’s performance.

Back at the RPAYC after racing, Byford and Hudson shared their thoughts on finally claiming the title that had escaped them in the past.

“You never really think you’ve got it in the bag. We had a block break on the jib halyard in Race 8, but the crew fixed it and we finished third,” Byford said.

Hudson commented: “We worked very hard for the win and we were consistent on the starts and had consistent boat speed.”

Byford added: “And good tactics helped us. It’s a relief to finally win.”

Hudson: “After Day 1 we were on the right track, but we had two more days of racing – you can blink and you are out the back door easily.”

Hudson: “The first regatta we went in, we were stone motherless last, but we’ve worked our way up. It comes from a lot of preparation.”

Byford: “That’s good encouragement for people out in the field today, to know if you work hard you will get there.”

Both heaped praise on their crew. “The other thing that got us here is the fantastic crew,” Byford conceded. “Without them, we wouldn’t be anywhere near it. When we broke gear and they got us back into it. Tactician Allen Storman (Rear Commodore Yacht Racing at RPAYC) and boat captain, Mitch White, did such good jobs.”

From us, the co-skippers, Mitch gave us a lot of confidence. He does a lot of sailing on well-known boats.”

Byford also paid tribute to Challenge’s owners and crew. “They were fourth on countback – they race at Port Macquarie in limited fleets. It’s bloody brilliant that they come down here and do so well.”

Special awards were given in recognition of various efforts. Thirlmere (Mike Logan, CYCA) received Most Improved. Tony Levett (TSA Management, MHYC), a 16-year member of class and a big supporter of it, received Longest Serving Contribution. Lisa Callaghan and Stephen Teudt (Mondo) were given the Spirit of the Class award.

“They rebuilt their boat and keel recently to get their boat here, and are hanging in and keep on having a go,” Byford said.

“Richard Williams finished first Corinthian and third overall. He’s been a long term campaigner. His tactician was Brenton Carnell, the owner of the 2015 and 2016 Championship winner, Phoenix.

“Thanks to Risk’s Chris Heraghty and Greg Moore who had a good regatta to finish fifth and helped organise the Championship.”

Byford ended: “This is 20 years of Sydney 38 racing. The first event was at Hogsbreath Airlie Beach Race Week, where Rosemary Merrington raced on Blowfly and Learne Dooley on The Business. Both were on the Race Management team at these Championships. It’s good to see them still involved.”

Friday consisted of four races inshore in 12-20 knots. “Saturday we attempted one offshore, abandoned it, as it was lumpy in 5-8 knots. We came back inside Pittwater for two races and had three offshore today. A good day out - 12-14 knots and a nice seaway,” Hudson said.

The Sydney 38 class thanks Gold sponsors for the Championship: E3 Advisory, a leading infrastructure advisory consultancy (of which Peter Byford is co-chairman), and Hood Sails Australia.

All information on the Sydney 38 class at: www.sydney38class.com/