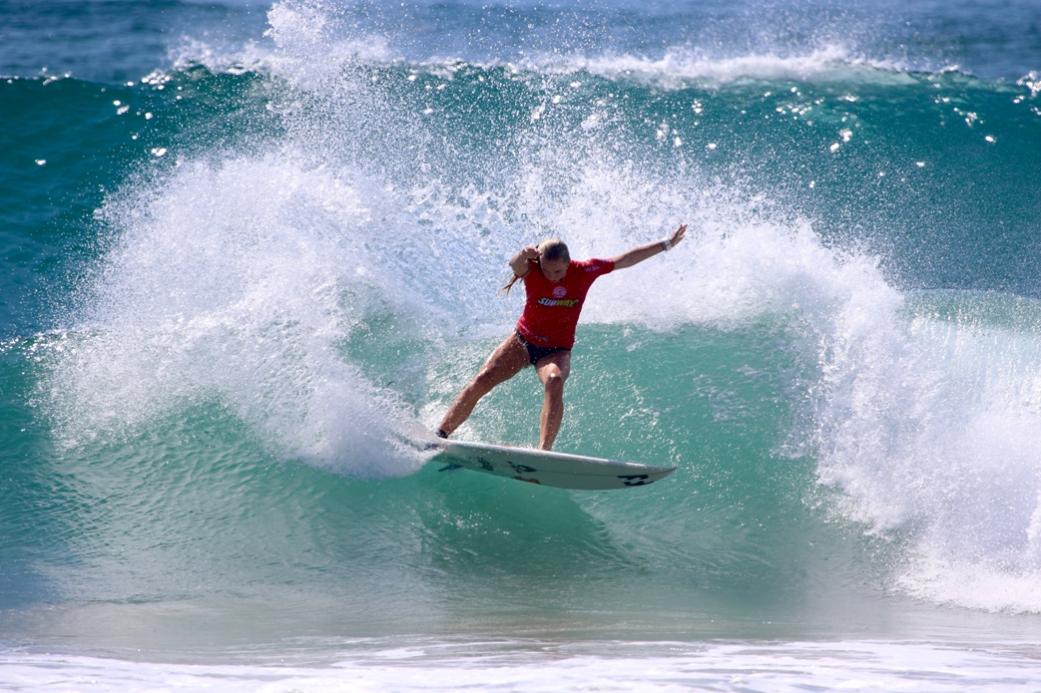 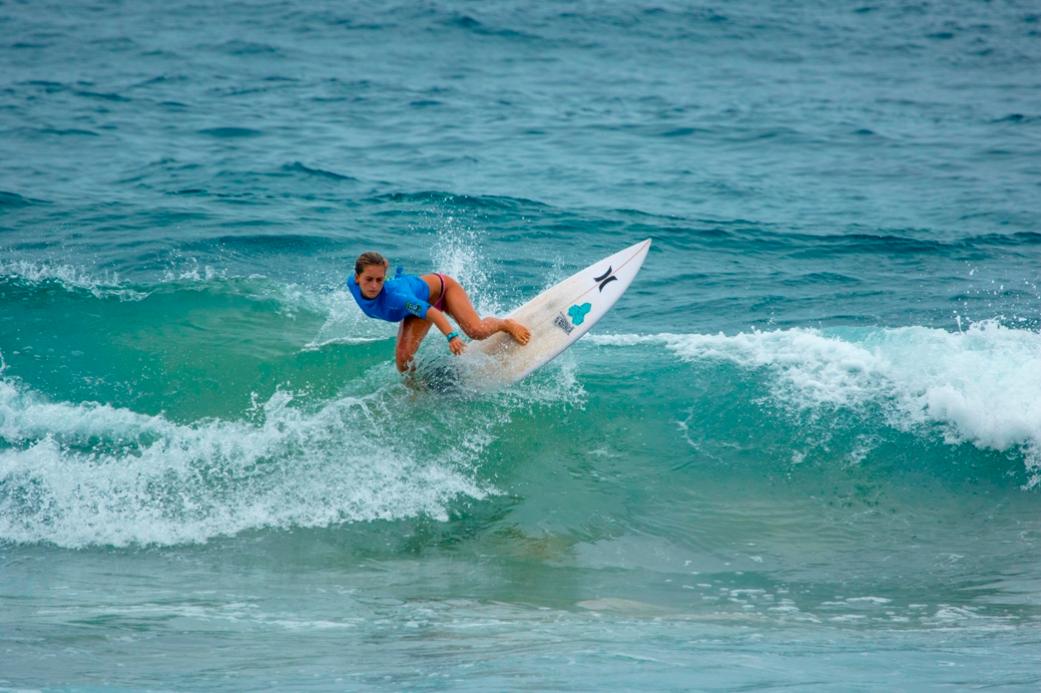 Lightening fast goofy-footer Reef Heazlewood (Moffatt Beach, Qld) capitalised on his solid early round performances, notching up a giant 16.35 heat total (out of a possible 20 points) to take out the Men’s division, the highest of the whole event. Heazlewood, turned the heads of judges and spectators in the final, executing an array of critical turns to claim the top spot on the dais.

“I’m so stoked to take this out and that there was a pulse of waves in the final,” said Heazlewood. “Kyuss was definitely in form all event and I knew I’d have to fight hard to beat him. Overall, that was a really fun final.”

Despite falling short of the victory, Kyuss King (Byron Bay, NSW) is walking away from the Subway® Surf Series with his head held high, following the exciting final with Heazlewood. King put up a valiant effort in the final, but was unable to find the 8.85 wave score needed to usurp the top spot from Heazlewood.

“That was great to have a heat with Reef,” said King. “I really wanted to do well in this event following a poor start at Bells, so I’m stoked to do it here. Hopefully, I can get a few more over the course of the year.”

Macy Callaghan (Avoca, NSW) continued her tear through 2017, taking out the Women’s division. Following her recent victories at the World Junior Championship and the 2017 Carve Pro QS1000, Callaghan continued to blow away her opposition with her trademark style and flair to make it a hat-trick of victories. Callaghan is now focused on making a solid mark on the Qualifying Series as she attempts to qualify for the World Championship Tour.

“It feels great to take this out,” said Callaghan. “This win really hasn’t sunk in yet, but I’m sure I’ll be elated when it does. The start of this year is all a bit of a blur, I’d love to keep the roll going. The goal now is to qualify for the World Tour.”

Bodhi Leigh-Jones (Whale Beach, NSW) opted to stay busy over the duration of the final, notching up 13 waves over the course of the 30-minute affair. Leigh-Jones knocked out an array of manoeuvres but was unable to find the necessary 7.60 needed to knock Callaghan from the top position.

“I’m stoked with this result,” said Leigh-Jones. “My previous best result was a quarterfinal finish in a Pro Junior, so this has definitely beaten that and to share it with a World Champion is an amazing feeling.” 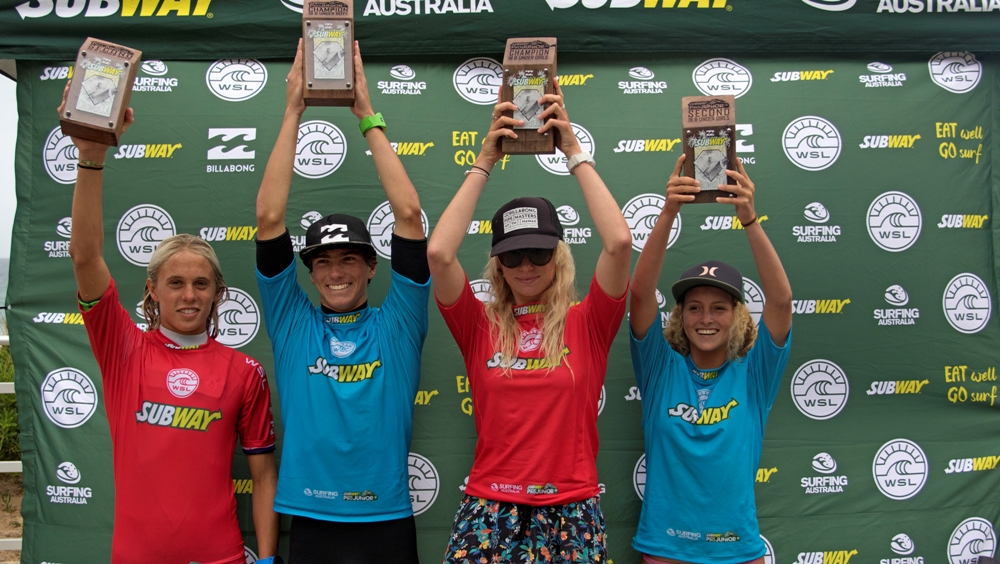 “My whole tactic originally was to just catch the best waves I possibly could, but because it was quite slow, I had to get busy to put some scores on the board,” said Heazlewood. “That heat was definitely the prime example of how priority can work for-or-against you as you tend to stay busy when you don’t have it, but when you hold first priority, you tend to sit and be a bit pickier.”

Mikey McDonagh (Lennox Head, NSW) managed to just hang onto a quarterfinal berth, following an intense to-and-fro battle in the third round of competition. McDonagh appeared to be in the box seat to take the heat convincingly, but had an uncharacteristic fall on one of the waves on the day and had to rely on smaller waves to notch up scores to take the runner-up position.

“That was a nail-biter that heat,” said McDonagh. “I had to change my boards around to suit the conditions and rode an epoxy, which felt a bit more sparky. Whichever way that heat went, I think I would have been happy following the result I got at Bells but it’s definitely nice to back it up it up here.”

Alyssa Lock (Tweed Heads, NSW) set herself up for a semi-final battle with World Junior Champion Macy Callaghan (Avoca, NSW) tomorrow following a quarterfinal victory over Northern Beaches native Tru Starling. In the low scoring affair, Lock managed to sneak in a mix of frontside and backside snaps to take the victory. 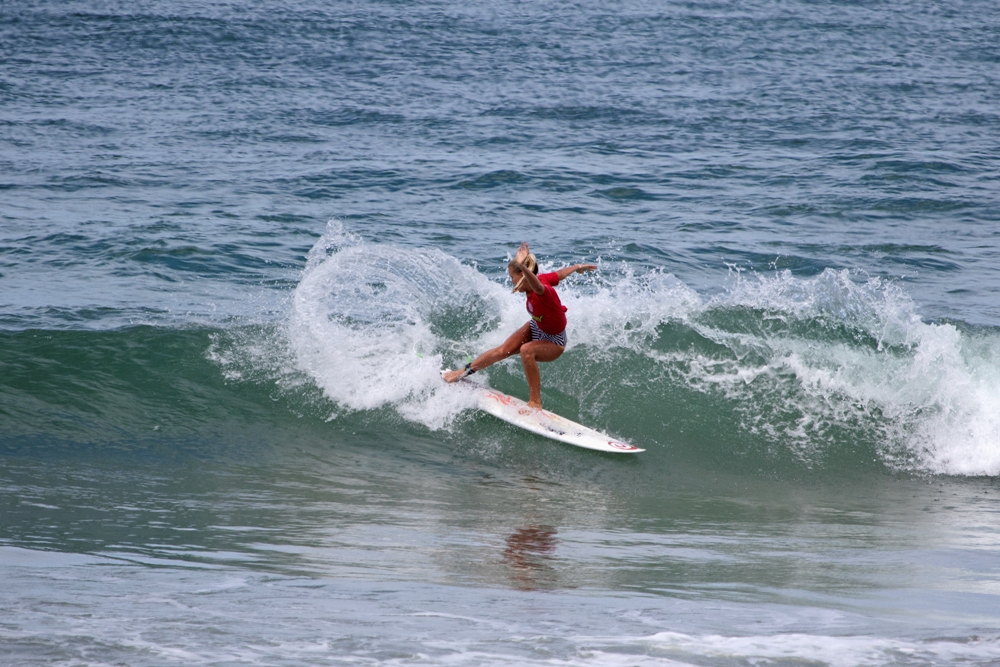 Tru Starling this week - photo by Ethan Smith/Surfing NSW
“It’s quite nerve-racking getting set to take on a World Champion, but I want to give it a good go,” said Lock. “Hopefully the swell increases tomorrow for our heat and we can make a bit of a show out of it.”

Wanting to surpass her previous best result of a quarterfinal finish in a Pro Junior, Bodhi Leigh-Jones (Whale Beach, NSW) went one step further today when she took down Kiara Meredith (Barrack Heights, NSW) to cement a spot into the semi-finals where she’ll face off with Sophia Fulton (Mollymook, NSW).

“I’m so stoked to make it this far in my second Pro Junior ever,” said Leigh-Jones. “I really wanted to just make it past the quarters, so I feel like I’ve achieved that goal. Everyone in the event at this point is an amazing surfer, so I just really want to go out there and do my absolute best.”

CRONULLA, SYDNEY
Monday 23 January 2017: by Surfing NSW
An array of international and Australian junior surfers hit the water today for day one of the Subway® Surf Series Pro Junior event at Cronulla. The second event on the seven-event series was blessed by playful three-foot peaks as male and female surfers attempted to move through the first rounds of competition.

Ryland Rubens (USA) has made his maiden voyage to Australia worth the flight, moving through the first two rounds of competition at Cronulla. Rubens went berserk in the second round of competition posting an impressive 14.80 heat total and cemented a position into tomorrow’s third round.

“That was fun,” said Rubens. “This is my first time surfing in Australia and everything is so sick. It feels great to get a few little corners on the waves I picked which allowed me to progress through the heat.”

Fresh off a recent victory at the Rip Curl GromSearch National Final, local surfer Jay Brown (Cronulla, NSW) appeared to have continued to build momentum as he tore apart the opening rounds of competition at his homebreak. Brown found a handful of rare lefts in the predominate righthand peaks to unleash a flurry of powerful turns and seal a win in his first round heat, followed by a runner-up finish in the second round.

“I think knowledge definitely played a part in that win,” said Brown. “This sandbank wasn’t actually here until a few days ago and it’s been really fun. I’m going to just keep taking it heat-by-heat as the comp ramps up and hopefully, I can keep the ball rolling.”

Having honed his forehand on Indonesia’s punchy beachbreaks, Rio Waida (Indonesia) felt at home in Cronulla’s playful peaks. Waida linked a chain of innovative fins-free turns to post a respectable 13.75 heat total and take the win in the nail-biter of a heat with Finn Hill (Avoca, NSW), Gabe Ley (Gold Coast, Qld) and Justin Becret (France) who finished in second, third and fourth respectably.

“The waves are so fun out there. I feel like I’m at home,” said Waida. “I looked who I had in my heat last night and knew they were all really good surfers, so I knew I’d have to do my best to beat them.”

Renowned for his wild aerial antics, Mateus Herdy (Brazil) opted for more traditional power-based turns when he surfed his round one heat. Herdy posted a massive 8.75 wave score, but failed to find a backup score to claim the lead and fell into second position behind Joel Buxton who claimed the win. Herdy turned heads recently at the World Junior Championship at Kiama and is looking at continuing the same form in more events over the Australian leg of comps.

“I’m pretty happy to get through that heat,” said Herdy. “I’m really looking forward to the other QS1000 events while I’m here in Australia and hopefully I can get a few good results. It’s been a really fun trip so far.”

Macy Callaghan (Avoca, NSW) has continued her tear through the 2017 competitive year, notching up a giant 15.00 heat total to claim a win in the first round of the Subway Surf Series at Cronulla. The recently crowned World Junior Champion put her opposition on the ropes and left her nearest rival Alyssa Spencer (USA) chasing a near perfect 9.00 wave score to take away her win.

“Those righthanders have really been dishing up some nice waves,” said Callaghan. “I’m stoked I found a few that allowed me to open up and do a few decent turns. If the conditions continue like this I think we will see some amazing surfing going down.”

After claiming event one on the Subway Surf Series at Bells Beach, India Robinson (Jan Juc, Vic) headed to Cronulla full of confidence and was able to claim her opening heat. With an increasing onshore wind making conditions difficult, Robinson managed to find several diamonds in the rough and executed a barrage of technically sound forehand snaps.

“It’s good to get that monkey off your back with a round one win,” said Robinson. “I really wanted to just get two quick waves out there as the onshore wind increased.  Over the course of the event I’d like to get a few bigger scores if I can.”

Having claimed a Pro Junior win at the same Cronulla Beach back in 2014, Kobie Enright (Tweed Heads) felt right at home as she tackled her first round heat head on. Enright gained the upper-hand against her rivals, posting a 14.00 heat total and made it known she’d be a solid threat going into round two tomorrow.

“All the girls in this event absolutely rip and I’m coming off a first round loss in Victoria recently, so I was trying not to think too much before I went out in that heat,” said Enright. “I’ve always loved Cronulla since I won a Pro Junior a few years back, the waves are usually fun and it’s a bit of a natural amphitheatre.” 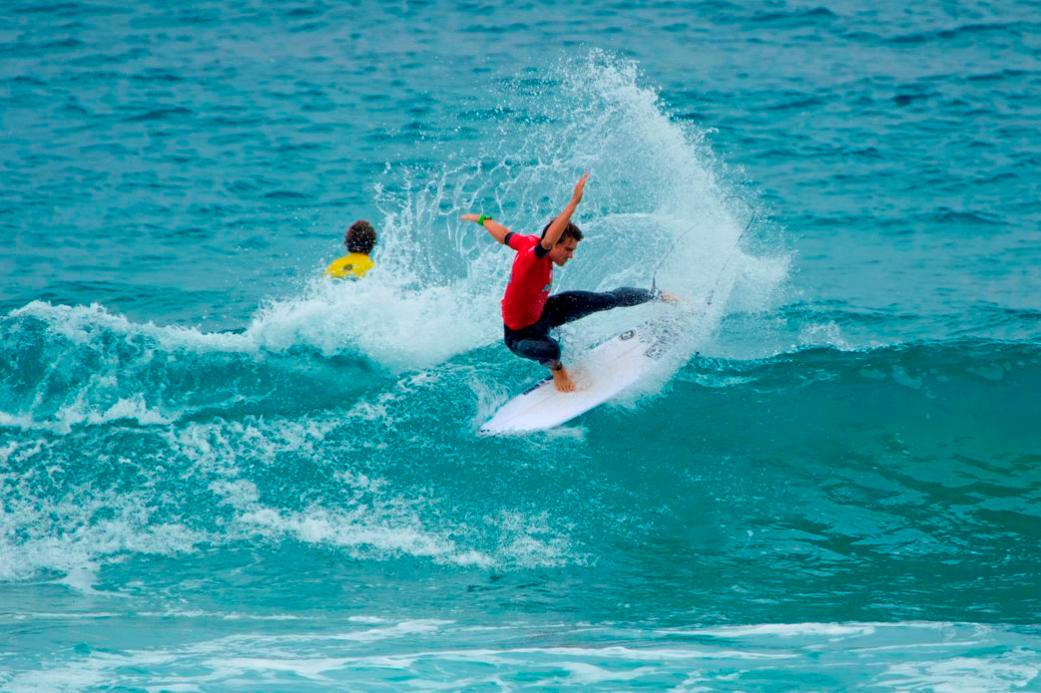 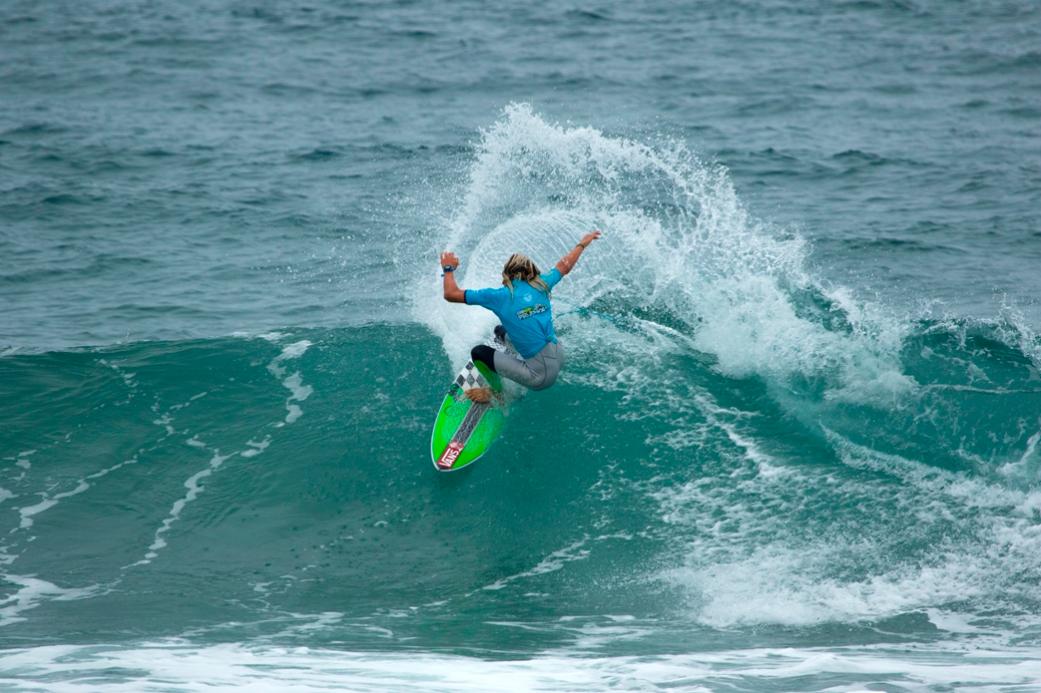