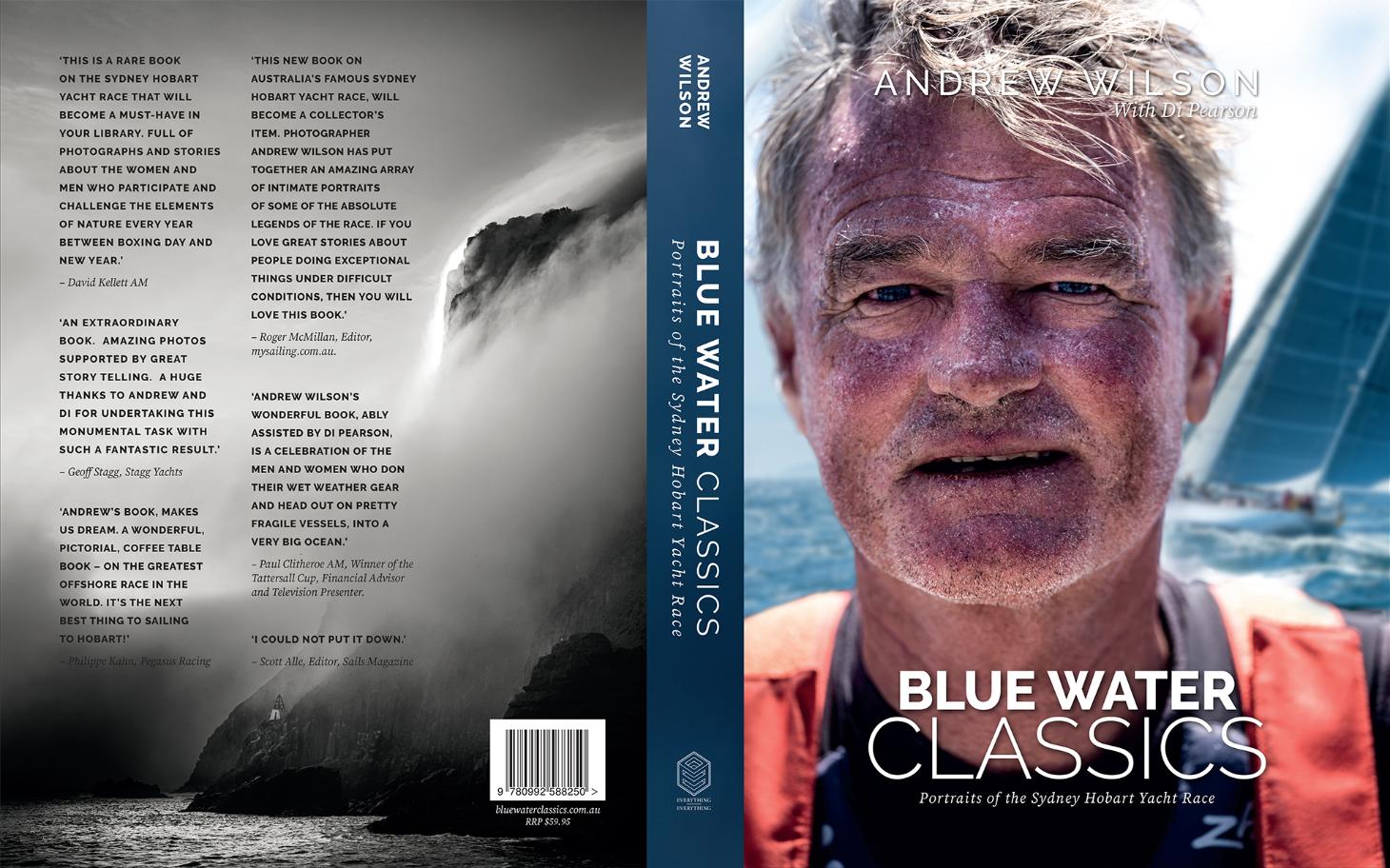 A brilliant new book ‘Blue Water Classics: Portraits of the Sydney Hobart Yacht Race’ by Andrew Wilson, author of the much-loved series ‘Old Sea Dogs of Tasmania’, in collaboration with journalist and Sydney Hobart Media Director Di Pearson, is due for release on November 7th.

The 520-page book takes readers behind the scenes via a vast array of intimate and drama-filled interviews with some of the legends of the race, inclusive of owners, competitors, officials, search and rescue personal and more. The interviews are interspersed by Pearson’s personal accounts from her 30 plus years involvement in a sporting event watched by millions every year.

Combined, these ocean racing escapades encapsulate the Sydney Hobart’s line honours and overall winning victories, the near misses, disputes, rivalries and emotive accounts of the tragic storm ravaged years synonymous with this iconic race. All are illustrated by over 400 portraits and seascapes captured by Wilson during the four years he documented the race.

Each photo captures the salt encrusted faces of yachties and breathtaking scenery from the start on Sydney Harbour to rounding Tasman Island, sailing in Storm Bay and finishing under the mountain in Hobart to cheering crowds.

An extract from David Kellett AM foreword for Blue Water Classics: Portraits of the Sydney Hobart Yacht Race:

Knowing my passion for the Sydney Hobart Yacht Race and therefore most things Tasmanian, Christian Brook, the owner of Boat Books, made me aware of Andrew Wilson’s book in 2013. He suggested I would like Old Sea Dogs of Tasmania. How right he was. The photography was superb and the stories were well researched, well written and entertaining.

Andrew followed this up in 2016 with Old Sea Dogs of Tasmania – Book 2, again with remarkable photographic portraits of the weather-beaten faces of Tasmanian seafarers, including several I knew particularly well.

Little introduction or encouragement was therefore needed to be involved when Andrew made contact with me in 2018 about doing a photo portrait book on the sailors in the Sydney Hobart Yacht Race. The enormity of selecting who should be featured was a difficult and monumental task, when so many famous faces and talented sailors had participated over the years. Fortunately, Di Pearson came on board the project and names were circulated, with Andrew and his camera making the hard decisions on the compilation. Having participated in 46 Sydney Hobart races since 1968 – 26 racing and the last 20 as the chief radio operator on the Radio Relay Vessel controlling the safety of the race – I have made many friends within the fleet over the years and whilst we have had a few ‘quiet little drinks’ after the races, it has been fascinating to read their stories. This is a rare book on the Sydney Hobart Yacht Race, full of stories not about the yachts and the results, but about the sailors: the women and men who participate and challenge the elements of nature every year between Boxing Day and New Year. The underlying thread in all the stories has been the challenge, the skill, the seamanship and, most importantly, the comradeship – as well as, in some cases, the incredible story of survival, like that of my close friend Bruce Gould.

All aspects of the race from the preparation to the finish and everything in between, including the personalities involved in the control of the race, the safe haven of Eden, and the officers of the vital search and rescue organisations, have been covered. With Andrew’s photographs and interviews combined with Di’s encyclopaedic knowledge of the race, this book will become a must-have in your sailing library. Having been passionate about the race since I was a small boy, the race has become a part of my life. I can’t imagine what I would do if I did not go to Hobart each Boxing Day.

Andrew is a professional photographer based in Hobart.  Andrew’s work is primarily focused on storytelling through people and place, being strongly influenced by the moods of Tasmania’s landscape.

Blue Water Classics: Portraits of the Sydney Hobart Yacht Race is Andrew’s latest publication, written in collaboration with Journalist and Race Media Director, Di Pearson. Over a four year period Andrew travelled from Hobart, to Melbourne, Eden, Canberra and Sydney to document the great race, photographing and interviewing not only the sailors and owners, but the organisers and search and rescue personnel as well to create a 520 page publication that has been described as an ‘Ocean opus’, ‘a rare book on the Sydney Hobart’, ‘an extraordinary book’, ‘a celebration of a globally iconic event’ and ‘a collector’s item’. 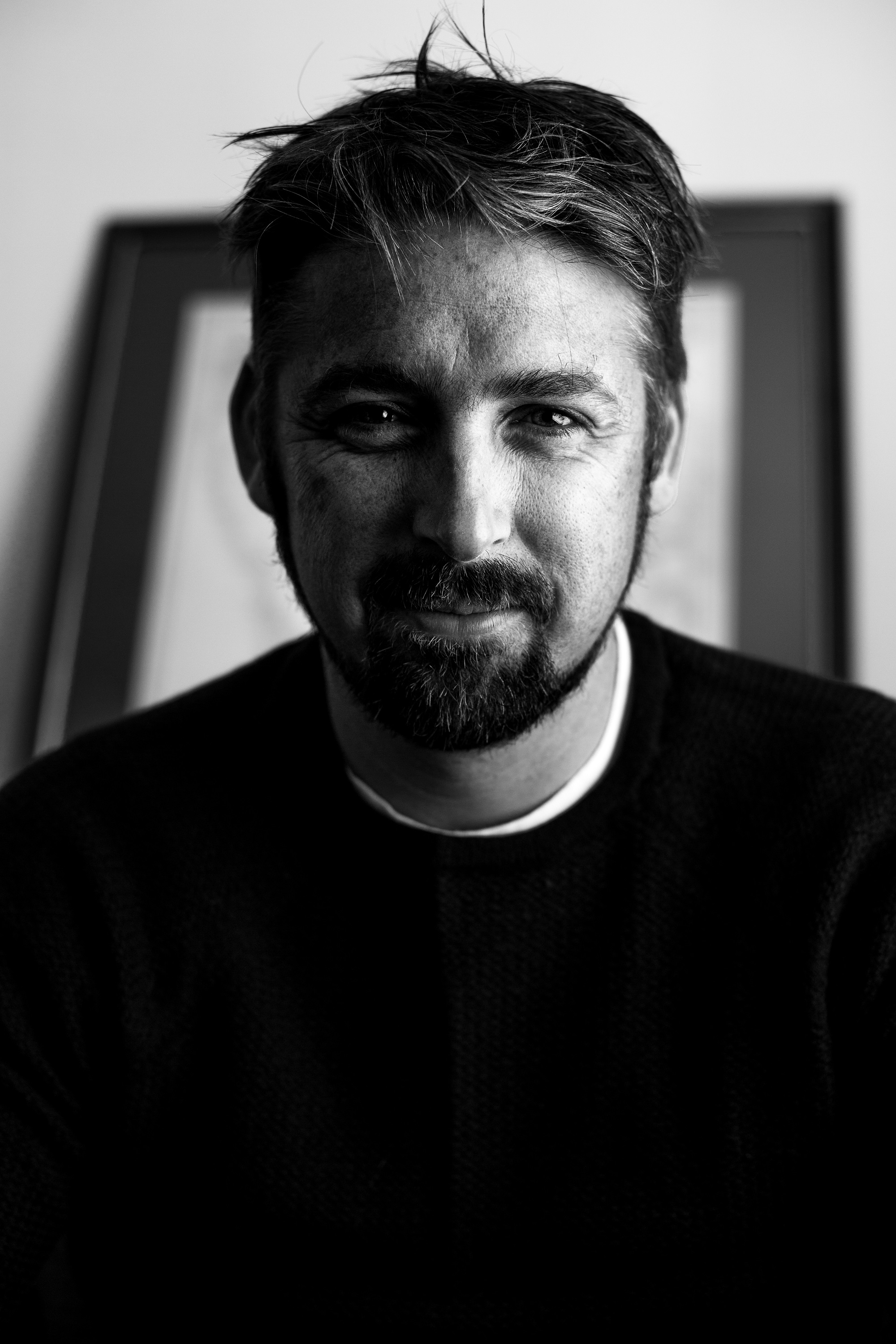 Di has worked as a sailing journalist and media manager for over 30 years and has had a working association with the Sydney Hobart Yacht Race for 30; working in the media team from 1989 until 1995, and going on to cover the race for magazines and websites before re-joining the media team in 2009, and being made media director in 2011.

Di has media managed or covered all major Australian and international yachting, Olympic classes, skiff classes, disabled sailing and small boat events. She has been a past editor of both Sail-World and boatingOz websites, is the weekend editor of MySailing website and is a major contributor to sailing magazines, winning awards for her work in Australian and Asia. From a sailing family, and passionate about sport in general, Di has raced skiffs and yachts (inshore and offshore), starting in 1972. 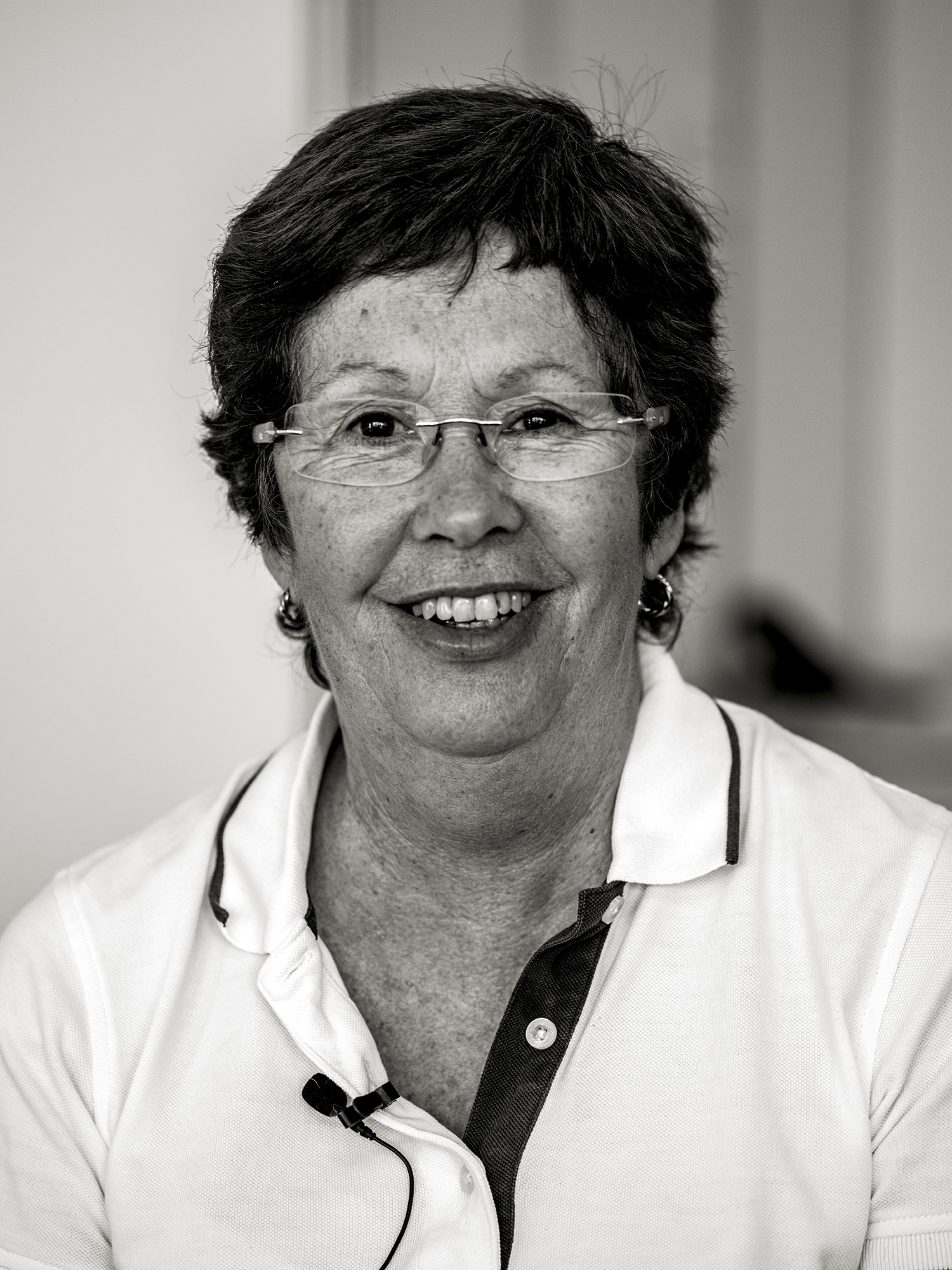 What early reviewers are saying:

‘This is a rare book on the Sydney Hobart Yacht Race, full of stories about the sailors - the women and men who participate and challenge the elements of nature every year between Boxing Day and New Year. The underlying thread in all the stories has been the challenge, the skill, the seamanship and, most importantly, the comradeship - as well as, in some cases, the incredible story of survival.’ – David Kellett, AM, Australian yachting identity/yachting administrator/past winner of the J.H. Illingworth Trophy and Tattersall Cup

‘Andrew’s book makes us dream. A wonderful, pictorial coffee table book – on the greatest offshore race in the world. It’s the next best thing to sailing to Hobart! – Philippe Kahn, technology innovator/entrepreneur/international yachtsman

‘An extraordinary book. Amazing photos supported by great story telling. The Sydney Hobart is tougher than the Round the World Race and without a doubt the most challenging offshore race on the planet. A huge thanks to Andrew and Di for undertaking this monumental task with such a fantastic result.’ – Geoff Stagg, international yacht designer/elite yachtsman

‘Andrew Wilson’s wonderful book, ably assisted by Di Pearson, celebrates the real reason why this race is so well known. Sure, the boats are beautiful, but at the heart of the race are those who sail in it. They make the race, its culture and its history. This book is a celebration of a globally iconic event, but most importantly, of the men and women who don their wet weather gear and head out on pretty fragile vessels into a very big ocean.’ – Paul Clitheroe AM, past winner of the Tattersall Cup/financial advisor/television presenter. 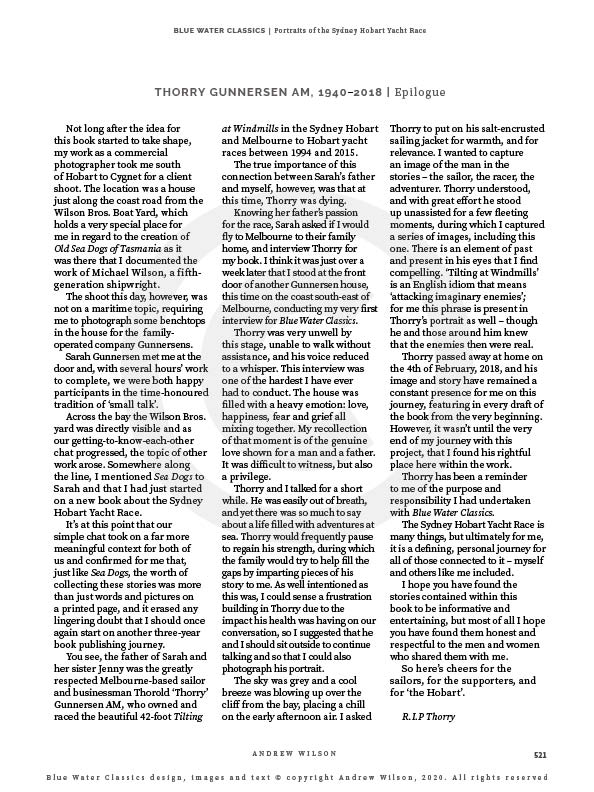 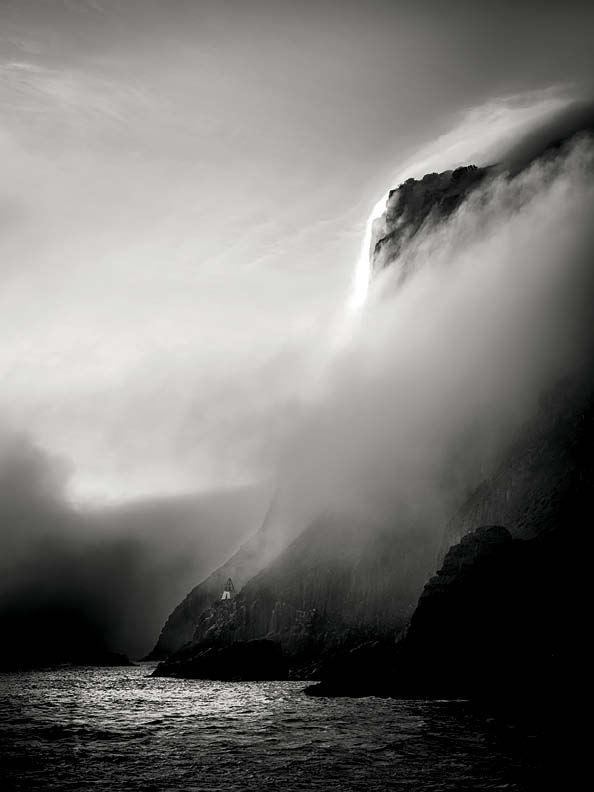 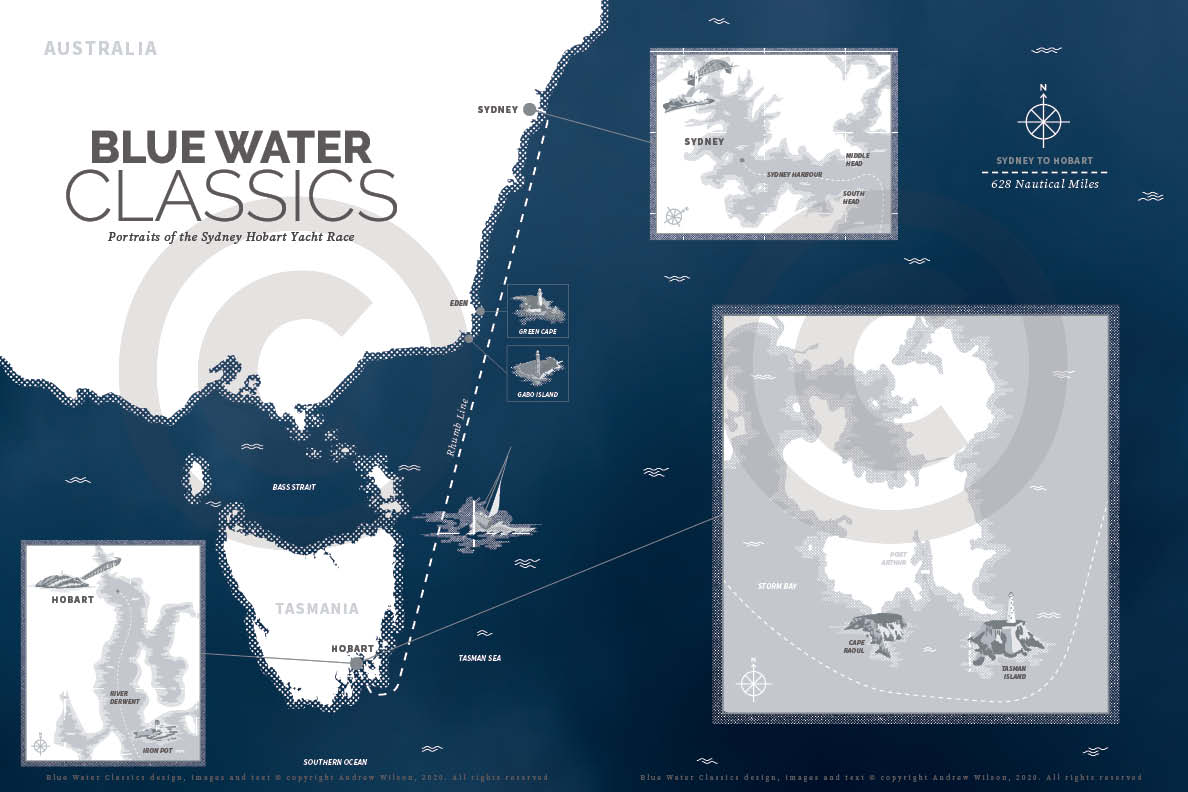 Blue Water Classics is self-published by the author and will be available in all major book shops Australia-wide from November.

Pre-orders available now at: bluewaterclassics.com.au or through your local book shop.

Photos and Biographies of Andrew and Di by Everything Everything media