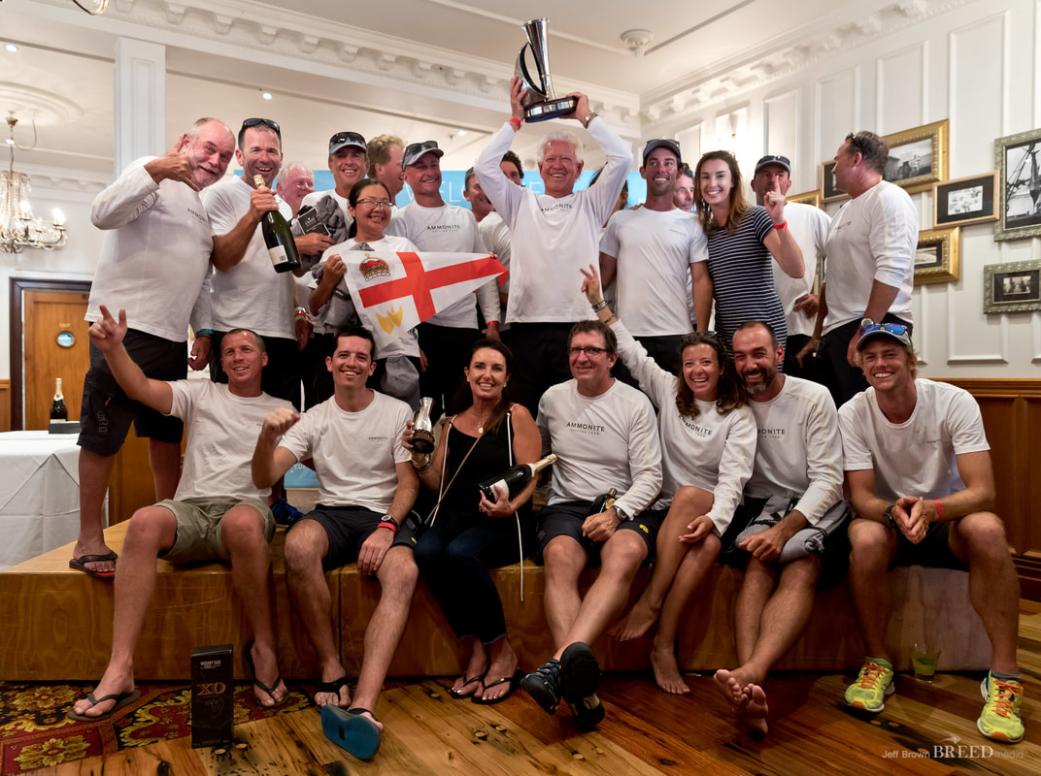 The New Zealand Millennium Cup features three days of racing in one of the most picturesque cruising destinations in the world.  With courses that thread through more than 140 sub-tropical islands. beautiful scenery and challenging navigation are assured at this popular and challenging regatta.

An innovative handicap system (ISYR) ensured for spectacular racing in the Bay of Islands, with competitors finishing within minutes of each other.

Even though it was her first time competing at the NZ Millennium Cup, there was no stopping Ammonite, who was representing the Royal Nomuka Yacht Club of Tonga. The SW82’s tightly knit crew included Olympic sailors Mathew Belcher and Will Ryan in addition to her owner, Marcus Blackmore, a sailing force to be reckoned with in his own right.

Sailing strong in all of the six races that make up this three-day event, Ammonite was confirmed as the overall winner with four wins out of six races.

“There’s no better place in the world to sail,” said Ammonite’s owner Marcus Blackmore at the prize giving ceremony. “Thanks go to all the sponsors and in particular Doyle Sails New Zealand’s Mike Sanderson who helped us understand local conditions,” he continued adding that Ammonite would enjoy defending the title next year if possible.

Thanks so much owners and Life Members Marcus and Caroline Blackmore for giving us such an amazing time here in NZ. To the crew of Olympic Gold Medallists, multiple America's Cup sailors, multiple Volvo sailors, skippers and winners including the worlds BEST navigator and some crazy inspiring sailors and beautiful Italians...WOW!! THANKS...your all an inspiration!!!"

The Royal Nomuka Yacht Club of Tonga Charter…To reintroduce the lost art and traditions of Vaka sailing to the youth (15-25) of Tonga and then the Greater Pacific thought the establishment of a “Vaka” and “Vaka Voyaging Canoe” One Design class and implementation of Vaka training programs and sailing events. To support the formation of a Tonga Sailing Federation and to introduce the INTERNATIONAL OPTIMIST dingy to Tongans 9-15 years of age using a mobile training package of five optimist yachts to share with Tongan sailors throughout the island groups.

The Royal Nomuka Yacht Club (RNYC) was formed with a letter of assent from His Royal Highness Crown Prince Tupouto'a 'Ulukalala who holds the esteemed position of Patron. The club was founded by Adventurer, Explorer and Sailor Don McIntyre specifically to reintroduce the lost art of Vaka sailing to the youth of the Kingdom of Tonga.The RNYC opened on October 22nd 2015 with a simple flag raising ceremony by HRH the Crown Prince on Nomuka IKI. Official Blessings, a Tongan Feast with cultural dancing, and the exchange of Traditional gifts marked the occasion.

The club will embrace all forms of water sport and sailing, with a focus on Vaka and Vaka Voyaging Double Canoe training, OPTIMIST DINGIES, youth development and adventure. An annual TONGA VAKA FESTIVAL held in October each year commencing in 2019 will be hosted by RNYC. Situated on the picturesque tropical Island of Nomuka IKI in the Ha’Apai group of the Kingdom of Tonga, a traditional Tongan Club House (to be built in 2018) will look out across white sand beaches and crystal clear waters to the main Island of Nomuka and it’s vibrant community just one mile distant.

Since her launch at Southern Wind Shipyard in Cape Town in 2016, this 82’ (24.72 metre) sloop has already sailed in almost all of the world’s oceans. After her maiden voyage from South Africa to the Med (7200 nm,) she crossed the Atlantic headed for the Caribbean. During Spring 2017 and Summer 2017-2018 she has cruised in the Pacific before heading for Australia and on to New Zealand.

She is named for Ammonite after an extinct group of marine mollusc animals in the subclass Ammonoidea of the class Cephalopoda.

As Godmother, my task today is to christen this boat “Ammonite”. The name is taken from the fossil of an marine creature that died out with the dinosaurs. In many cultures, these beautiful spiral fossils are believed to have healing powers. I can’t help but see the happy association with her owners, who themselves are a couple that bring together beauty and healing. - Godmother Speech at SW82 Ammonite launch, 2016.

This speech has added resonance when you take into account the Blackmore Foundation, Marcus and Caroline Blackmore's personal philanthropic trust, and Australian natural health company Blackmores, each gifted $5 million to the Western Sydney University in April 2017. WSU's NICM is Australia's leader in integrative and complementary medicine research and policy. Seed funded by the Commonwealth and NSW State Governments, NICM plays a key national role in ensuring Australians have access to reliable evidence on complementary medicines and treatments in wide use.

But about that Australia Day set of final races over the pond in the 2018 NZ Millennium Cup...

Despite a postponed start due to light airs on January 26th, entries weren’t complaining as a pod of dolphins swam around the fleet in the mouth of the Bay. A Silvertip crew member lay stretched along the yacht’s prod with dolphins in the bow wave beneath him rising up for a closer look, as competitors waited for the breeze to build.

“It’s a light air regatta, which makes it very difficult for competitors to find the right places to go and forced them to search for wind,” said ISYR creator and regatta handicapper, Jim Teeters who was onsite in New Zealand for the regatta. “The ones who did that best came out on top.” ​

A changeable wind rose towards midday with racing getting underway at 12.30 for the first of two races to cap the series. That first race saw the fleet on a leg straight down to the Orams Marine mark and back to the finish line off Long Beach.

Sassafras was first to the top mark, tacking on the nose of Tawera and Ammonite, while on the final lay line to the mark, Tawera had to dip Enso.

It was Tawera to the finish line first however, taking the first race of the day and securing a series standing four points behind leaders Ammonite and two ahead of challenger Silvertip.

The second race of the day and sixth of the series started just after 14.30 with the short course to the Orams Marine mark and a finish off Russell, a nod to the changeable light breeze.

Consistent with her strong performance throughout the week, Ammonite winning the first two races of the regatta, Ammonite rounded the mark first followed by Sassafras, then Tawera, after the Royal Huisman overhauled her on the first leg. Enso followed, then it was Janice of Wyoming around the mark while high drama unfolded behind her - crowd favourite Silvertip was forced to retire due to a mechanical failure.

The Ammonite finished the series in the strong style she’d demonstrated all week, taking not only the race, but the NZ Millennium Cup 2018.

Peter Montgomery MBE and legend of New Zealand sailing, closed the regatta as it had started - with his unmistakeable tones ringing out over the waters of the Bay of Islands.

Thanking sponsors, organisers and competitors, there was also time to acknowledge the highly skilled race management team; while the increasing number of overseas guests the regatta attracts as word of New Zealand’s cruising grounds spread, looked on.

“The NZ Millennium Cup is a nice environment, in a great locale, with very good competitors, and a very friendly atmosphere,” US-based Teeters said with a smile. “It feels good to be here.”

The New Zealand Millennium Cup is organised by the NZ Marine Export Group and a group of dedicated New Zealand superyacht figures. With three days of high quality racing, exceptional hospitality and stunning views in one of the most picturesque cruising destinations in the world, this event is truly unique and a must do for adventurous owners.

As a focal point for both the local industry and for the global brands looking for more exposure in the growing South Pacific market, the NZ Millennium Cup is supported by a number of sponsors, including platinum sponsor Orams Marine, and gold sponsors Smuggler Marine, Bay of Islands Marina, Doyle Sails New Zealand and Servcorp.

Our sincerest congratulations go to Ammonite, her owners and crew. We look forward to more of her regatta news in the future.

Organised by the NZ Marine Export Group and a dedicated committee of some of New Zealand's most pre-eminent superyacht industry figures, the NZ Millennium Cup is a celebration of good racing, great cruising grounds and exceptional hospitality.

Drawing attention to New Zealand’s beautiful cruising grounds, skilled workforce and innovative industry, we’re looking forward to delivering an event which showcases the best of our superyacht sector in a relaxed, recognisably-Kiwi style. A key focus of the regatta is to encourage extended cruising within the country, and the committee will be working closely with the wider industry to ensure yachts are aware of the diversity New Zealand waters present, as well as the opportunity for world-leading refit and repair services.

The Cup is raced under the auspices of Russell Boating Club

Russell Boating Club is located in scenic Matauwhi Bay, Russell. The club was established in 1971, and owns and maintains an approximate 100-year old boat building shed with local historic value as its clubhouse. The club has approximately 300 members and is an important local promoter of boating, both recreational and sport. In additional, the club serves as a social hub in the community for those with an interest in boating.  ​

For 42 years, the Club has been organizing a “Tall Ships Regatta” in January of each year as its signature public event. The all-volunteer-based regatta draws close to 1000 people to participate in the day’s activities. 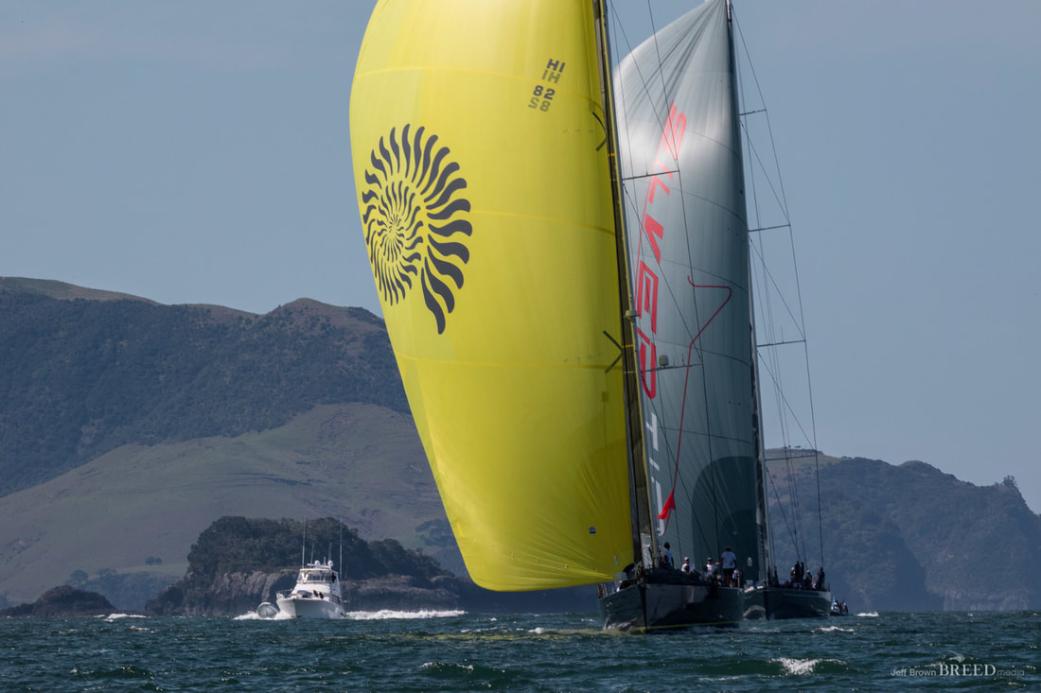 Ammonite with her spinner up. Photo by and courtesy  Jeff Brown, Breed Media