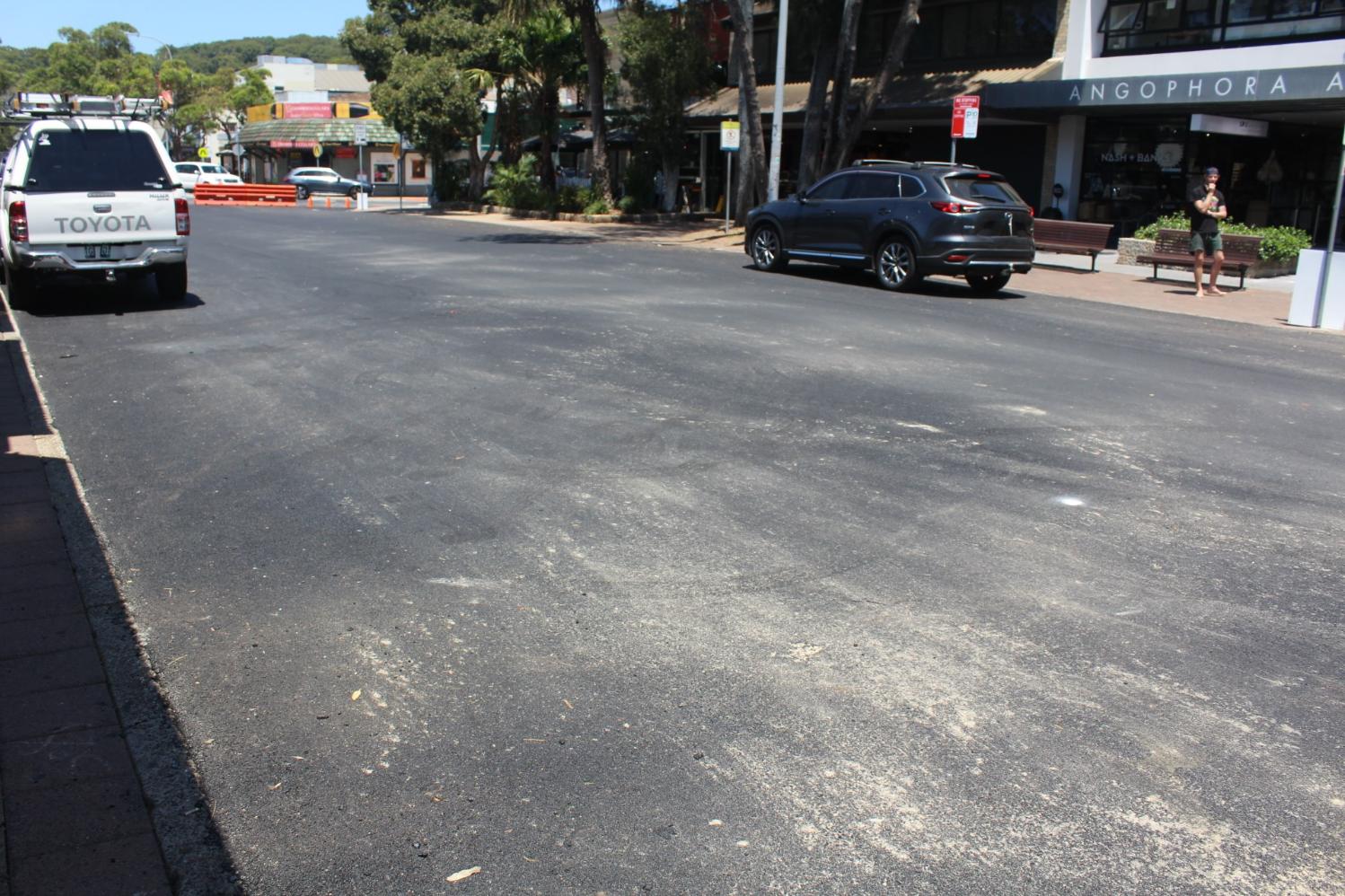 The section of Old Barrenjoey Road, Avalon Beach after the asphalt had been installed and prior to milling works for drainage taking place.

Pittwater Councillors Rory Amon (Liberal), Michael Gencher (Your Northern Beaches) and I met with members of the Avalon Business Chamber on Thursday morning to hear about the impact of the road works on local shops and cafes.

Many businesses are concerned about the noise of heavy machinery, delays at the intersection of Old Barrenjoey Road and Avalon Parade, as well as relocation of bus stops. The problems are a culmination of misfortunes following nearly three years of Covid, the closure of Woolworths plus the council carpark during the year, and work by Sydney Water in recent weeks.

However, I’ve spoken to most shop owners or managers near the intersection this week, and a number are positive about the trial and think it will improve the village, some are relieved to see the change of position for the intersections (where they’ve seen too many close calls), and I’ve even had one business owner tell me that although their takings were down in the first week of the road works, since then business has been booming!

Frustrations for residents and shop owners alike were exacerbated when contractors laid bitumen incorrectly last Sunday night on the new shared zone on Old Barrenjoey Road. The surface was meant to have a 2 degree slope from both sides towards the centre of the road, designed to drain rainwater into the stormwater pipes below Avalon Parade, at the north-west corner of Old Barrenjoey Rd. However, the bitumen was spread so that the whole road surface was flat - creating a potential flood hazard and alarming nearby shops.

Pittwater councillors then met with council staff on Thursday afternoon to nut out the best way forward. The following points were made:

Work recommenced on Thursday night, with the milling machine breaking down the surface of the road near the library and starting on the southern side. This continued on Friday, and no work was planned for Saturday.

The workers explained how the milling machine works - there's a big drum, two metres wide underneath. They fit a band of metal teeth over it, that then gouges into the road surface. The long arm out the front directs the dug up asphalt  into the truck.

Close up: - you can here there's a little ledge that sticks out the side - they use that to set the level. Then they program how deep they want to go:

The shoulder for the pedestrian crossing outside Ecodownunder was completed.

Also on Thursday night, staff were surprised to see Sydney Water out digging holes in the road.

Sydney Water joining in on the action

Staff will give councillors another update on Monday night at our normal briefing before the Tuesday night council meeting.