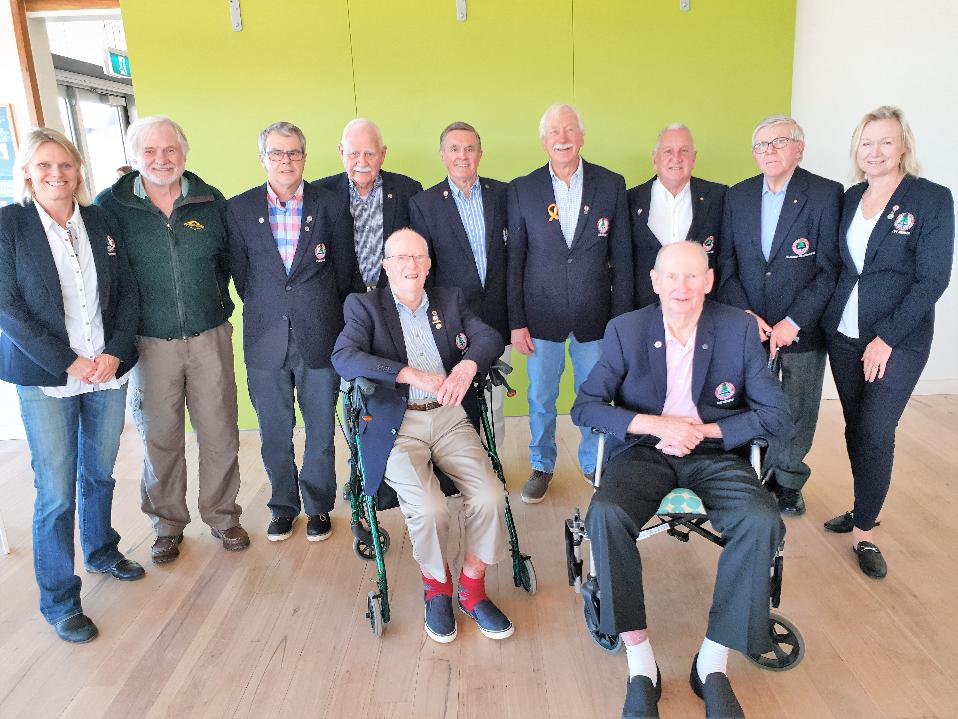 Another successful year for the best Surf Club in Australia...Avalon Beach SLSC.

At Sunday's AGM the annual report was presented, Avalon Beach SLSC's 94th. All official positions were refilled with few exceptions, with Ashley Cardiff doing a great job as President. Club Captains this year will be Melinda Akehurst and Mike Stanley Jones. Mike is currently on an SLSA Exchange in Japan.

Daryl joined Avalon Beach SLSC in 1978, receiving his Bronze Medallion the same year as well as over 28 other awards throughout his service to surf lifesaving at Avalon Beach. He has been a patrolling member at both Avalon Beach and Warriewood and has been the recipient of major Club awards such as, Patrol Person of the year and the Norman Cook Memorial Award for most outstanding member. Daryl has also received Branch honours with bravery awards for great rescues performed throughout his career.

Daryl has performed over 1500 volunteer patrol hours including 8 years as Patrol Captain and has held the position of Club Captain and Caretaker. He started competing for the Club in the early 80’s winning a vast range of State, Inter Branch and Branch medals, the pinnacle was the Australian Gold medal in Open Surfboats in 1993 - Avalon Beach’s first Surf Boat gold medal. Daryl has represented Australia in the world Surf Life Saving Championships in America in Surf Boat rowing and also competed in other events such as IRB, Board paddling, Surfing and swimming events and is still competing in Masters events.

Daryl is a long serving member, with a can-do attitude. He is one of those members that every club needs. Daryl goes about his undertakings quietly, engaging in a whole range of tasks from shelving in the boatshed and patrol rooms and bar area to fixing rescue boards, racing boards, patrol signs, repairing oars and boats along with any other menial task to keep Avalon Beach SLSC as the most outstanding surf club in Australia.

The NSW Government Premiers Volunteer Recognition Program celebrates volunteering and acknowledges the desire to take part in community life across all ages. It also recognises the contribution volunteers make towards strengthening our communities. Launched by the Premier 2015, since then more than 28,000 volunteers have been recognised across NSW under the program. At our AGM the following members were recognised for 40 years volunteering service and those present collected their certificate; Ian Wright, Jack Watt, Warren Mitchell, Stephen Davey, Michael Byrnes, Kevin Watt, Geoffrey Harris, Reg Wood, Daryl Johnson, Robert Head, Don Imison and Ken Davidson (dec.)

Cr White also presented the following members with a 25 year certificate who were not duly recognised at last year’s AGM due to a records upload error; Shaun Wolthers, and Life Members Roger Sayers and Roland Luke. Life Member Bruce Muston was presented his 25 year Award last year by David Mehan, MP for the seat of The Entrance at a separate ceremony.

Congratulations to all recipients.

Ken Davidson, was also a recipient of a 40 year Award this year, and this will be presented to his family at Ken’s memorial in the Bangalley Bar on Sunday August 11th, 2019

NSW Volunteer of the Year Awards

Volunteers are the unsung heroes in all our communities – although they don’t seek recognition for all they do, they certainly deserve it. The Centre for Volunteering holds the NSW Volunteer of the Year Awards each year and last season the following Club members were nominated.

The following awards were presented at our Presentation night in June:

Well, what a year it has been for our humble surf club. Being named both NSW and National Club of the Year is a once in a generation achievement and one for which we must rightly be immensely proud. It really is a credit to our membership and the tireless work of the Board of Management that has the Club basking in the glory of these accolades. Of course, none of this would be possible without the work of current Vice President, Richard Cole. Richard was the architect of the submission initially lodged with SLSNSW. A very excited group attended the awards ceremony at Darling Harbour and were delighted to bring home the trophy. This achievement resulted in a nomination for the National award. The submission was redone and a group started preparing for the presentation and question and answer panel session that was ahead. Richard, Bernadette McKay and Nick Sampson formed our delegation and it is with immense pride that we can say that we were successful.

These accolades are only possible because of our membership base and this year we once again achieved our primary goal with no loss of life at Avalon Beach during patrol hours. We patrolled for more than 7000 hours this season and the dedication of our patrol members cannot be understated. The work of our Club Captains, Melinda Akehurst, Pete Carter and deputy Jason Dale getting all the patrol rosters sorted made it fair and equitable for all our active members. Making sure our gear and equipment is ready for gear inspection and well maintained throughout the year is a huge task. One of the great initiatives of our lifesaving management team is getting all our Patrol Captains together on the first and last patrol of the year to share ideas and knowledge and debrief about aspects of patrols that could be improved on.

Our trainers this year had another fantastic season putting plenty of new Bronzies through their paces and upskilling many of our existing members. I was glad to be part of an ARTC course and see first-hand the skill and dedication of our training group. Congratulations to Michael King our Director of Education for a fantastic year putting 157 people through awards and co-ordinating proficiencies. Some of his trainers include Mark Head, Rick Mitchell, Louise Billia, Louise Lindop and Mike Stanley-Jones. I would also like to acknowledge McGrath Real Estate in Avalon Beach for their support of our trainers by supplying new long sleeve shirts to keep them protected whilst out in the sun. Congratulations must also go to the two new Gold Medallion Award recipients Louise Billia and Lachie Mills as well as Mike Stanley-Jones who gained reaccreditation.

We ran our community events once again this year including the McGrath Avalon Carols at the Beach, Lion Island Challenge and the Surf and Around the Bends swims. These events would not be possible without the volunteers that set up, pack up and keep it running. Volker Klemm has once again done a fantastic job co-ordinating the lunar calendar to our advantage.

Our surf sports team has had an outstanding year with some great results across the board. A big thank you to Nick Sampson, our Director of Surf Sports who has done a great job once again. The season began with the tragic loss of surf boat sweep and Club mentor Rick Millar. It was an extremely sad day when Rick was farewelled by members of the Club after his long health battle was lost. When his ashes were scattered and the Memorial Day was held, his impact on the boat community right across the country was evident as rowers and crews from far and wide attended to celebrate his life. No one was sure what the first carnival would be like without the presence of Rick on the beach, but Pete Carter, Nathan Wellings and upcoming sweep Matt Mayall really stepped into the breach and led the team throughout the year. Pete took both of Rick’s junior crews and they once again excelled with selection in the Branch and NSW State teams and The Hueys went on to claim a Bronze medal at the Aussies. Nathan had several crews once again and led his Open Women’s Crew to outstanding results in the Ocean Thunder event and came a heartbreaking 4th place in the Aussies final. The Masters’ team did outstandingly well with a Gold medal to the DB’s, a Silver to the Rockstars and a Bronze to the Antiques. Boatie of the Year was awarded to Pete Carter at Presentation Night. Well deserved and congratulations.

Other results of note at the Aussies include Jean Harper, who got a Bronze in the Beach Flags and one of the most outstanding results was from the youth team under Dave Roberts. Watching the future of our Club compete in challenging conditions at North Burleigh was an absolute privilege. Harry Schaut did a great job to place 4th in the 2km Beach run and Jack Roberts placed 8th in the Malibu Board Paddle and took out the Surf Board Riding event.

Presentation Night was once again a raging success and without the dedication of Amelia Barber the Avalon Apres themed night would not have been possible. The Norman Cook Award winner was Louise Billia, President’s Award were given to Matt Mayall and Shannon Fletcher and the Steve Parkes Award for Education was awarded to Mark Head. Congratulations also to Lachie Mills who was the Most Outstanding Junior and Chris McGuckin who once again claimed the Max Watt Award for Competitor of the Year.

As part of the Club of the Year responsibilities we hosted the first board meeting of the year for the SLSA Board of Management. Our Touch of Gold themed cocktail party the night before was a huge success. Leanne Austin did an amazing job dressing the Bangalley Bar and co-ordinating music and food for the night. The Bangalley Bar will be undergoing some renovation during the off season and hopefully a new fresh look will welcome us into the new season.

Nippers this year has been another huge success under new President, Tom Waters. Tom has a relaxed go-to attitude and has inspired and led his team extremely well. Looking over the beach and seeing all our kids having fun on a Sunday is a huge part of the Club and the future is in good hands. Thanks to all the Age Managers who also devoted their time to helping and encouraging the children. This year Tom has taken some of the age groups up to Palm Beach on Sunday mornings to try and spread out the numbers at Avalon Beach and give the kids more quality water time.

The faces on our Board of Management will mostly be the same as last year with no major changes foreseen and the continuity is a good thing for the Club.

Thanks to my wife Melinda and children for your support and love through this first year into my role. It is a challenging role, with plenty of time investment required but I couldn’t have done it without you.