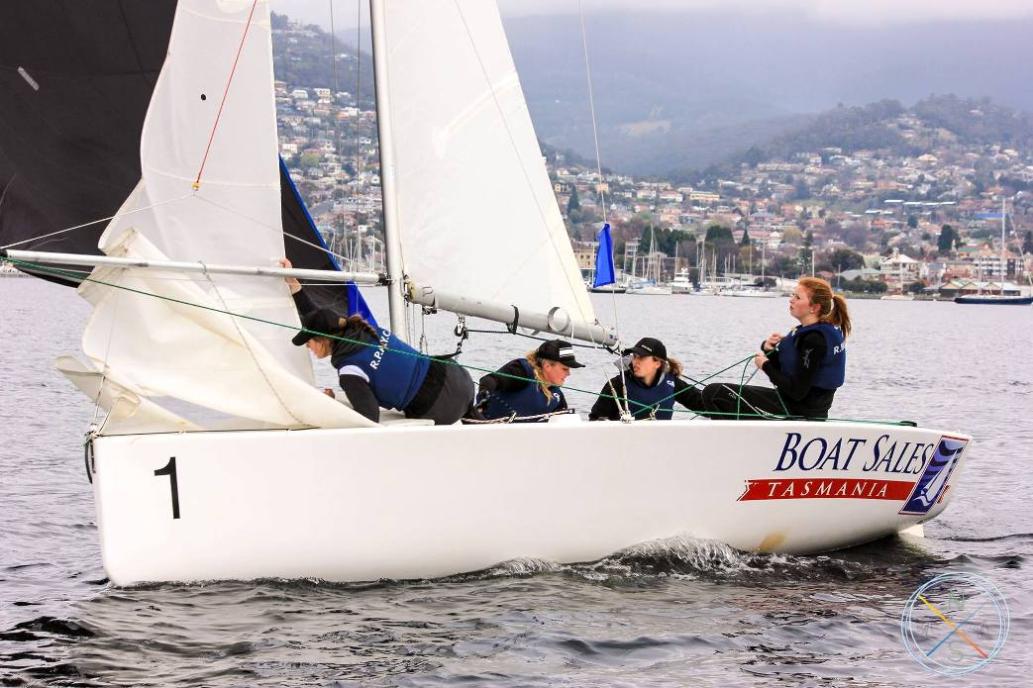 2016 Australian Women's Match Racing Champion Clare Costanzo and her crew on the River Derwent. Photo by and courtesy Nick Smart

After narrowly missing out on the title last year in the final race, it made this year's win that much more rewarding. Lauren Crossman, Emma May and I sailed together at the Australian Women’s Match Racing Nationals hosted by RPAYC in 2015. We decided to team up again this year to give it our best shot at victory, with my younger sister Juliet Costanzo joining us on bow.

The three-day regatta started in light breezes, slowly increasing as the day went on. Our first race of the regatta was probably the most eventful and stressful. We were half way through the pre start against Kirsten Norris to realize our kite halyard was, in fact, stuck at the top of the mast. We tried to retrieve it during the prestart but no one was quite able to climb up the mast. We started the race in front after a good prestart and spent the entire upwind trying to think of solutions. It was Emma May’s offshore bow experience, which got her thinking outside the square. She suggested we drop the jib and hoist the spinnaker on the jib halyard. We managed to pull this off and win our first race of the regatta.

The second day was extremely light and shifty; the race committee was only able to fit in a few races before we went ashore for the day. The race they cancelled before returning ashore was in fact the grudge match of RPAYC vs RPAYC where we were in fact both drifting backwards in the Prestart with the strong tide of the Derwent River.

On the third day the race committee told us we should be careful what we wish for. We all woke up to a shifty 20+ knots to finish the round robin and complete finals in. The race committee finished the first round robin quickly and then we went into semi finals. We finished the double round robin in 1st place with 12 wins and therefore raced against 4th place, Sam Bailey from RYCT. This left Sarah Parker RPAYC 2nd place to race against Caitlin Tames CYCA 3rd place. The semis were raced in shifty and puffy conditions with the wind coming directly off the land in short sharp bursts. We won our two races against Bailey, which gave us a spot in the finals.

After we finished our races, we were watching Sarah Parker approaching the finish line about to win her second semi final when the team was hit by a huge gust and went into a Chinese gybe. The crew was unable to drop the kite due to a knot in the halyard. Sarah fell out of the boat during the incident and managed to hold onto the back until they crossed the finish line, however Caitlin Tames managed to come from behind and win the race. Caitlin then went on to win the next race, giving 2 wins to Tames from the CYCA. It was disappointing to not get to race against our club mates in the finals, however they gave it their all in the petite finals to come away with 3rd.

We then went on to race Caitlin Tames from the CYCA in the finals. Due to time limits it was first team to get two wins. We went into finals determined and fired up to leave everything on the racecourse; we ended up coming away with the win 2-0.

We would like to thank The RPAYC for their support not only for the regatta but throughout the past few years in Youth Development, the RYCT and race committee for hosting the event, Sarah Parker for some strong competition and Super Coaches Malcolm Parker (who came down to Tasmania to support us) and Tom Spithill.

The RPAYC team beat another Sydney crew, Caitlin Tames, from the Cruising Yacht Club of Australia's Youth Sailing Academy 2-0 in the Grand Final at the end of hard sailing in a gusty 25 knot nor'wester.

However, the luckless skipper was Costanzo's club mate, Sarah Parker, who spectacularly crashed out of contention in her semi-final against Tames.

Parker had come through two round-robins with 12 wins, as did Costanzo, and looked near certain to win the semi-final against Tames, taking out the first match and holding a substantial lead in the second as she neared the finish.

Caught by a sharp gust, Parker's spinnaker got out of control, the boat went into a massive 'chinese' gybe and Parker fell overboard, hanging on the transom.

With her crew unable to drop the spinnaker, Parker was being dragged astern in the chilly waters of the Derwent. Eventually, she let go and swam to a nearby official boat as Tames surfed past to make the score 1-all.

Parker and her crew fought valiantly in the third match, but appeared rather shaken up by their ordeal, going down 2-0 in the semi-final

However, Tames was no match for Costanzo in the grand final, losing 2-0 while Parker's crew regained their composure to win the petit final against Sam Bailey and her crew of Jill Abel, Kirsty Gray and Amelia Catt from the Royal Yacht Club of Tasmania/Athena Sailing, 2-0.

Light winds featured on the first two days of the championship, but on Day 3 it blew and blew.

Report from and courtesy Royal Yacht Club of Tasmania