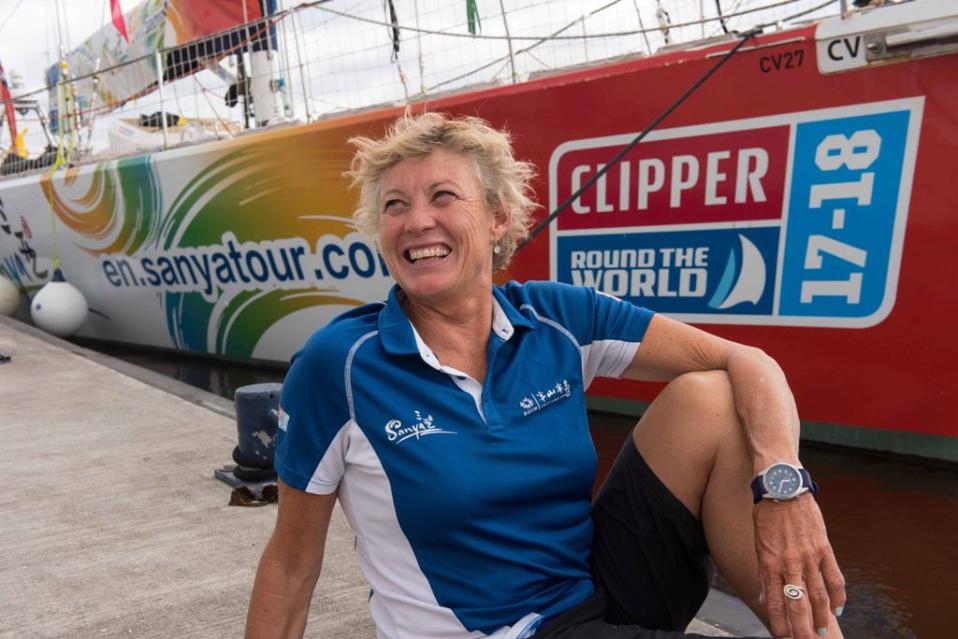 History was made last weekend as Australian Sailor Wendy Tuck becomes the first woman to ever win a round the world yacht race after clinching the overall victory in the Clipper 2017-18 Race.

And in an additional win for women’s sport, second place went to British Sailor Skipper Nikki Henderson, 25, the Skipper of Visit Seattle.

Wendy and her Sanya Serenity Coast team went into the thirteenth and final race of the Clipper 2017-18 Race on top of the overall standings and have done enough to put the result out of reach for the other ten teams ahead of the sprint finish up the Mersey to Royal Albert Dock Liverpool, UK.

Wendy, 53, from Sydney, said: “I can’t believe it. It hasn’t really sunk in really but I am just so happy. It is so, so special.

“I don’t think it’s about being a woman. It’s just do what I do. But I am very proud and even prouder of my team. They are the ones that did all the work and considering many had never sailed before, what they have accomplished is incredible.”

Tuck first competed in the event in 2015/16, becoming the first female Australian skipper to do so. In the 2015 Sydney to Hobart she was awarded the Jane Tate Memorial Trophy for being the First Female skipper over the line. She completed her 10th Sydney to Hobart last summer.

It was a battle to see who would seal the win – Wendy or Nikki Henderson, the youngest ever Clipper Race Skipper. Despite Visit Seattle playing its Joker Card (a device which double the race points earned) Nikki Henderson fell just short of the overall win but her four podiums over the last year meant she and her team will take second place overall, despite the results of Saturday’s sprint.

Visit Seattle Skipper Nikki Henderson said: “Congratulations to Wendy and her team – you were just too quick for us!

“We didn’t get the win but I am so proud of how my team dug deep and kept fighting right until the end. No matter how hard it got, they turned up on deck ready to work and deserve every bit of this success in coming second.

“It will take a bit for it all to sink in. We still have once last sprint to go on Saturday and we will be sailing with style right until the very end.”

Delighted with the female one-two finish, Clipper Race Founder and Chairman Sir Robin Knox-Johnston, the first person to sail solo and non-stop around the world, said: “There’s never been a race, a round the world race, where you’ve had the two leading Skipper both be women. This is a first. And when you look at what they are racing against, the experience of the other Clipper Race Skippers, you realise that this is really very special.

“The impact of the success of both Wendy and Nikki cannot be underestimated. If this gets even one more girl start sailing and dreaming big, then I’ll consider everything we have done over the last eleven months a huge success.”

The other Chinese Clipper Race entry, Qingdao, won Race 13, the final stage of the Clipper Race from Derry-Londonderry to Liverpool, crossing the line at 10:04:04 UTC on Friday 27 July to finish 28 minutes ahead of the second placed Liverpool 2018, whilst Garmin was third.

Qingdao Skipper Chris Kobusch says: “It has been a fantastic race and I am extremely happy and proud of the effort my team has put in.

“To be able to not only secure the Race 13 victory but also guarantee our Race Team Partner Qingdao its first ever overall podium is extremely satisfying. The entire team has been working towards this goal for the past year and it is amazing to realise that we have done it.”

This is the fourth podium of the 2017-18 series for Qingdao and the second win after the team previously claimed victory in Race 9 across the mighty North Pacific from Qingdao to Seattle. Qingdao has also been the champion of the Scoring Gate, with the team collecting a fleet high 19 bonus points from Scoring Gates.

Although podium positions have been decided, bonus race points will be awarded to the first three teams that cross the sprint finish line off Royal Albert Dock Liverpool, where were expected to arrive between 0930 and 1000 on, Saturday 28 July.

The Clipper Race is unique in that it trains non-professionals to be ocean faring sailors. Established in 1996 by Sir Robin Knox-Johnston, the first man to sail solo, non-stop around the world, 40 per cent of Clipper Race crew have no previous sailing experience before signing up and undergoing the compulsory four weeks of training.

In total, 712 people representing 41 different nationalities and from all walks of life have taken part in the 40,000 nautical mile Clipper 2017-18 Race, the event’s eleventh edition.

Find out more via the Clipper Race website:  https://www.clipperroundtheworld.com/

Wendy Tuck
Wendy Tuck is a Sydney yachtswoman and chief instructor and principal at the Clipper Race Base in Sydney, Australia. she has previously worked as a Sailing Instructor, Charter skipper, and even did a turn as First mate on the sydney Fast Ferries for two years.
For Wendy 'Wendo' Tuck, one race around the world was never going to be enough, and now she’s making history as the first Australian skipper to take part in the arduous ocean challenge twice.
"I love the Clipper Race so much, it’s still in my blood," says Wendy.
"It was such an achievement, and I’m just so proud to once again be representing Australia in this epic challenge."
It’s not the first time Wendy has made Clipper Race history. In the previous 2015-16 edition, she was the first Australian female skipper ever appointed to lead a team of amateurs on the epic 40,000 nautical mile race across the world’s oceans.
Before setting off on a second Clipper Race, Wendy rang in 2017 by achieving her life-long goal of making the CYCA honours list, after competing in a tenth Rolex Sydney Hobart Yacht Race.
The RSHYR is a race close to Wendy’s heart. The 52-year-old was awarded the Jane Tate Memorial Trophy after being the first female Skipper across the Finish Line, plus she led her team to win the Clipper Race class of the 2015 Rolex Sydney Hobart Yacht Race, which doubled as Race 5 of the All-Australian Leg.
Wendy knows a thing or two when it comes to handling a diverse and inexperienced crew. In the 2015-16 edition, there were twelve nationalities and 47 careers in her crew, with the ages ranging from 18 to 66.
Wendy’s appointment continues Australia’s proud association with the Clipper Race. She is the sixth Australian Skipper in the history of the race. Richard Hewson claimed victory with Gold Coast Australia in 2011-12, whilst Spirit of Australia, skippered by British Skipper Brendan Hall, was the winner of the 2009-10 race edition.
Additionally Qualified Persons on board Sanya Serenity Coast:
Race 4, Fremantle to Sydney: Tom Salt
Race 5, Sydney to Hobart: Tom Salt
Race 6, Hobart to Whitsundays: Tom Salt
Race 7, Whitsundays to Sanya: David Graney
Race 8, Sanya to Qingdao: David Graney
Race 9, Qingdao to Seattle: David Graney
Race 10, Seattle to Panama: Campbell Mackie

The Clipper Round the World Yacht Race

The Clipper Round the World Yacht Race is a sailing race around the world in 8 legs, with trained amateur crew members. The organisers own a fleet of identical yachts, the Clipper 70, and provide qualified skippers to lead each team. Crew can either sign up for the whole race, or one or more legs. The race was conceived in 1995 by Sir Robin Knox-Johnston who founded Clipper Ventures plc as a company to run the race. The race ran every two years between 1996 and 2002, and then skipped a year, with subsequent races beginning in 2005, 2007, 2009, 2013, 2015 and 2017.
In contrast to the slightly older but now defunct Global Challenge the Clipper Race uses lighter, faster boats and the route follows the prevailing currents and winds. The current fleet of yachts are 12 Clipper 70 yachts first used in the 2013-14 race. The race has used two other previous classes of yacht comprising 8 Clipper 60s and 10 Clipper 68s.
The origins of the term "Clipper" in the race name comes from the historic tea clippers. In the 1830s tea clippers were small, fast, cargo carrying sailing ships. Premium prices were paid for the season's first consignment of tea from China to reach London. In the Great Tea Race of 1866, four such ships held an unofficial race, and this inspired the name of the modern day race. The eight Clipper 60 yachts were initially named after tea clippers including Ariel, Blackadder, Taeping and Thermopylae.

In the middle third of the 19th Century, the clippers which carried cargoes of tea from China to Britain would compete in informal races to be first ship to dock in London with the new crop of each season. The Great Tea Race of 1866 was keenly followed in the press, with an extremely close finish. Taeping docked 28 minutes before Ariel - after a passage of more than 14,000 miles. Ariel had been ahead when the ships were taken in tow by steam tugs off Deal, but after waiting for the tide at Gravesend the deciding factor was the height of tide at which one could enter the different docks used by each ship. The third finisher, Serica, docked an hour and 15 minutes after Ariel. These three ships had left China on the same tide and arrived at London 99 days later to dock on the same tide. The next to arrive, 28 hours later, was Fiery Cross, followed, the next day, by Taitsing.
Given the close finish, and fearing that the consignees might find reason to avoid payment, the prize, or "premium", was claimed by Taeping but shared between them and Ariel, by agreement of their agents and owners. 1866 was the last time that a premium was written into the bill of lading of a tea clipper for docking in London with the first of the new crop. Though clippers raced with cargoes of tea for a few more years, the only commercial advantage was in the reputation as a fast ship, thereby securing a better rate of freight in the future.
Ariel and Taeping, by Jack Spurling 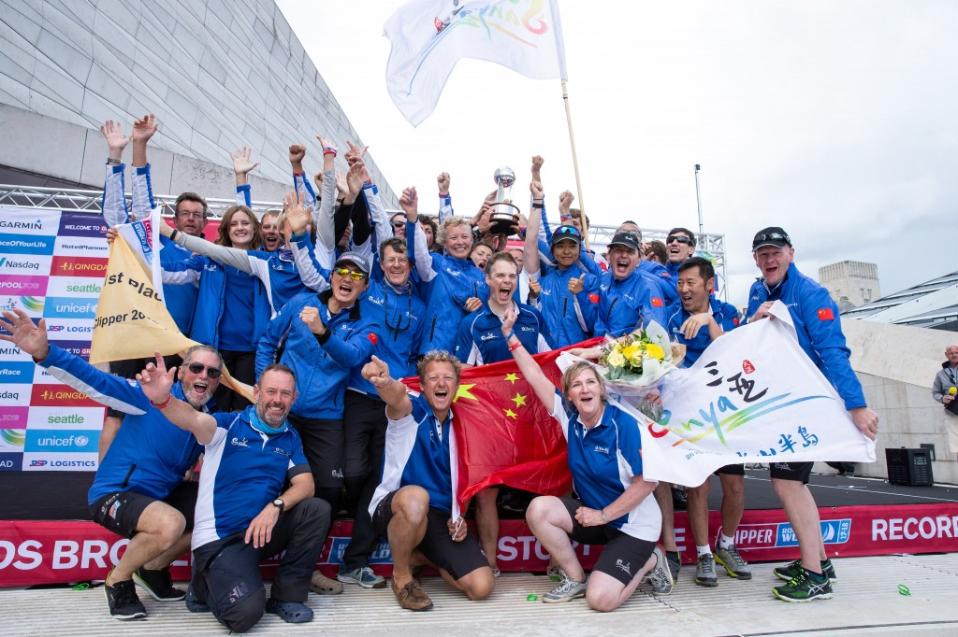