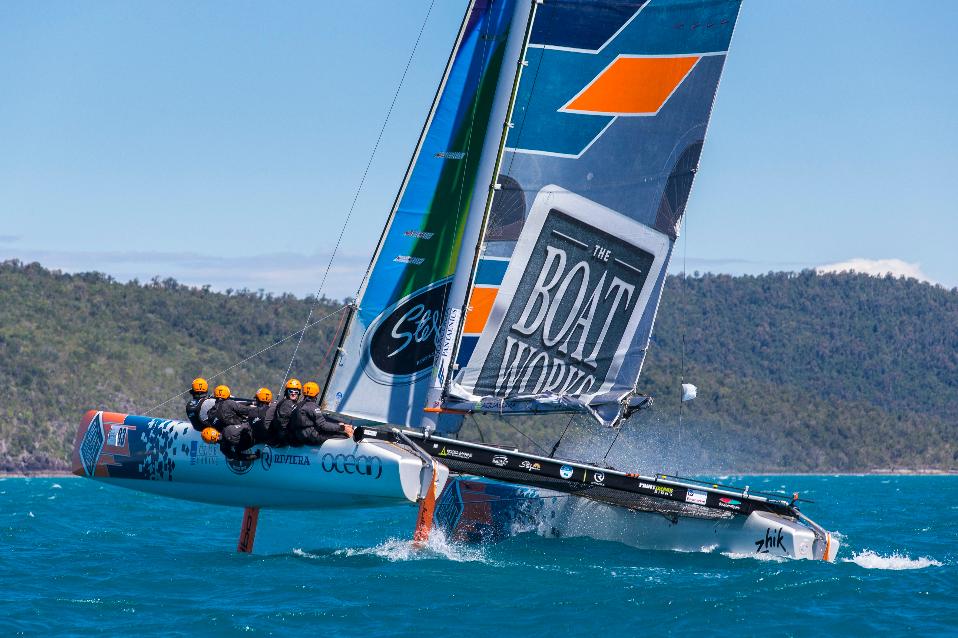 Some of the largest and fastest multihulls, both catamarans and trimarans, will descend on Whitsunday Sailing Club’s (WSC) Airlie Beach Race Week Festival of Sailing to compete in the 2019 Australian Multihull Championship, to be held from 8-15 August.

The multis will make the trek to the Whitsundays where the weather, warm welcome and scenery are second to none, and an onshore social program boasts enough to keep everyone happy.

“We’re planning a day of windward/leeward races and a selection of 20-30 nautical mile passage races taking in the beautiful Whitsunday Islands for them.”

Chisholm continues, “Onshore, Airlie Beach is the ideal location for the Championship too. There is a large range of critical facilities, such as sailmakers, riggers, chandlers, shipwrights, marine electrical, engineering fabricators, crane facilities and more.”

Charles Meredith, president of the newly formed Multihull Yacht Association of Australia (MYAA), which represents the larger multihulls, says they chose the 31st running of Airlie Beach Race Week Festival of sailing “because the multis are always well represented at Airlie Beach. Lots go there as the weather and general atmosphere are great. It’s just a popular venue for them.

“Everyone loves the courses, and with a range of sizes from the larger size down to smaller boats, Airlie Beach caters well for the whole range,” he comments.

For the first time in Australian sailing history, at least three Extreme 40’s will face-off at Airlie Beach. Previously, the high octane class competed in an established stadium style series in Europe and was sailed by some of the biggest names in the business.

Multihull fanatic, Michel Van Der Zwaard, is bringing Back in Black, while Brisbane’s Mike Peberdy will arrive with High Voltage. Sound familiar? Both are names of famous ACDC songs.

“These two boats landed in Australia just after Christmas. Mike and I have been working together to get them ready,” Van Der Zwaard explains.

“Mike’s new sails went on recently and I’m flying into Brisbane on Tuesday to sail Back is Black for the first time,” says Van Der Zwaard, a Victorian who spends a lot of time in Queensland., including sailing on Dirty Deeds at Airlie Beach last year.

“This time I will be there to have fun and to get around the course without injury, but of course we will be trying to win too,” he affirms.

A third Extreme 40, the colourful ‘The Boat Works’, caused a sensation when Julian Griffiths steered her to third place at Airlie Beach in 2016. She was the ‘wow’ factor of the fleet.

“The three are roughly the same age – all built around 2005,” explains Van Der Zwaard. “It’s going to be great event with three or four Extremes and Clayton Matthews’ Nacra 36.

Mitchell is unclear as to whether he will be on the start line with Ullman Sails, because his Grainger Apex design is on the market. But Both Darren Drew’s Top Gun and Gerald Valk’s Crosshair are early confirmations. The pair has competed at ABRW in previous years.

Top Gun, from Pittwater in NSW, is a Crowther 50 performance racer/cruiser that has proven to be one of Australia’s fastest ocean racing cats. She won OMR and PCF in the 2017 Brisbane to Gladstone Race, missing line honours by 16 minutes.

The current Australian record holder of the fastest ever time in an ocean passage race, with an average of 17.2 knots achieved in the Townsville to Cairns race, Top Gun is arguably one of Lock Crowther’s finest racing designs.

Valk and his Farrier F32, Crosshair, will again join the road train of those bringing their boats all the way up from Adelaide. And after making the journey of over 2600 kilometres with pit stops along the way, the South Australians will be looking for a good result.

Charles Meredith says: “Expect to see at least three entries from South Australia and another two or three from Victoria. We’ve had interest from New Zealand as well.”

A warning to all serious multihull sailors, the Championship is shaping up to be a massive event, so don’t miss out.