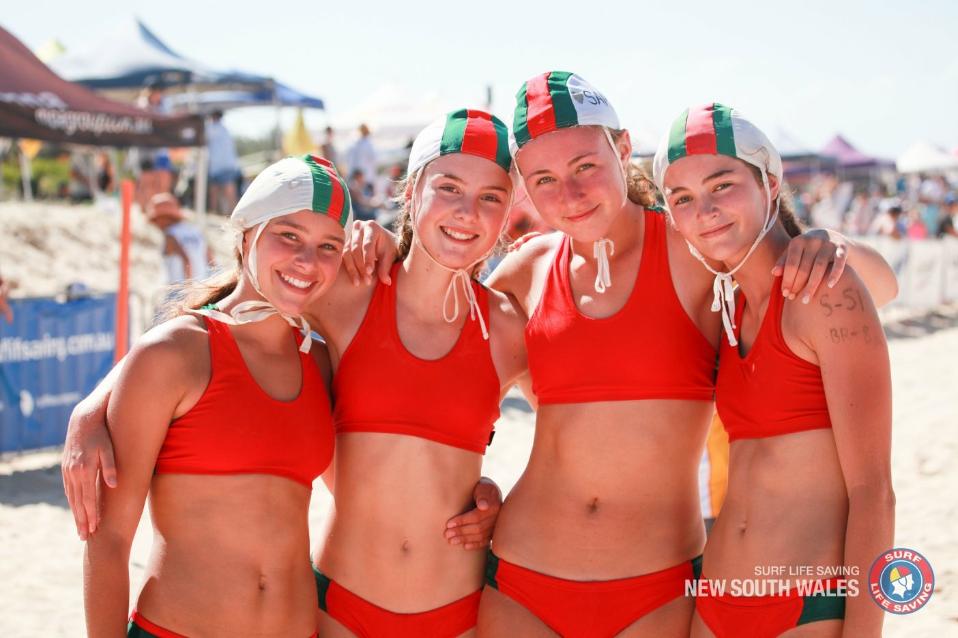 The 2019 Australian Surf Life Saving Championships, better known as 'The Aussies' to its 6,500 competitors, begins this weekend with the cream of NSW youth athletes set to take centre stage first up.

Cudgen Headland’s talented Under 15 Ironwoman Lily O’Sullivan doesn’t have to travel far to this year’s event, but can’t wait to compete with her strong and developing team. After taking a second place in the Shannon Eckstein Classic last weekend on the Gold Coast she says the competition has been closer than ever.

“The top girls in NSW in the Under 15s are all about the same level at the moment, so it will be pretty close racing, even with more waves than we’ve had this season. Being in the right place when the waves come through will play a big part in the results more than ever this weekend.”

Cooks Hill are the 2019 NSW Age Champions and their competition manager Michael Clancy says the 20-strong team of mostly first-timers to Aussies, have set themselves up for the conditions that are different to back home in the Hunter.

“The team has been here since Tuesday and has spent their time experiencing and working out the sweep of the currents and the power of the waves. Aussies is a great event for our kids to attune themselves to the stronger clubs, especially in Queensland. They love seeing the depth of talent of others, pitting themselves against the people they don’t get to compete against usually.”

After winning the NSW Age Championships, Clancy says the proof of their talent is clear, “when you see the number of champion Iron competitors and board racers in the club now, it really shows the strength of training we have at Cooks Hill.”

Clancy says to keep an eye out for both Sophia McMahon in the U15 Surf Race and Charlie Walker who will test himself competing up in the Under 15s Surf Race. 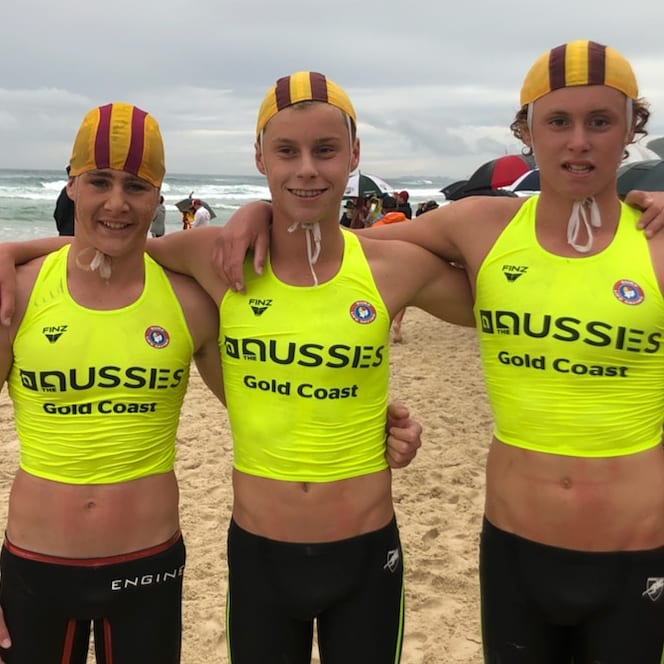 From the south coast, expect to see Elli Beecham from Narooma SLSC take to the sand and challenge the girls in the U15 Beach Flags and Sprints. Champion Ironman Ali Day’s grass-roots club, Warilla-Barrack Point SLSC are on a fast-track to re-developing their club’s dominance in surf sports. They are sending a squad of 20 up to Queensland and are hoping to return with medals and great experiences to build on.

The Central Coast will also be represented by athletes who had exceptional results at the NSW Champs. Look out for U15 NSW Board Champion Natalia Drobot and Ryan Green from Avoca in the boys who has also been in great form.

Competition begins on Saturday 30 March at North Burleigh for the Youth Championships. Competition will then move to Broadbeach Surf Life Saving Club from 1-7 April, with the Masters and Opens competition.

Results will be available at sls.com.au/aussies

In the u14 male final, all eyes were on the four Newport caps in the 18-strong field, and the Morris twins and Bailey Clues in particular. Mitchell and Jake Morris had won the Surf and Board races (respectively) yesterday, with Mitchell also winning silver in the Board. Bailey Clues also had a bronze from the Board coming into Sunday’s final.

During the swim leg there was extra swell around, with the four Newport boys and Jackson Blake from Warilla Barrack Point, the top five heading back to the beach. Blake was the surprise packet of the day. He just missed both individual finals but on Sunday he was in the thick of the lead action.

After working hard to run and dolphin dive through the gutter it was Clues in the lead going into the Board with Blake and the Morris twins on his tail.

Mitch Morris had moved into the lead around the first can, and it was really tight leading into the beach until he was able to hang onto a wave that no-one else could and from that point the national title was his.

Morris made winning his third individual medal from the three finals at the Championships look easy, but it not the case.

“It was hard out there on the board,” Morris said. “I didn’t want to trip in the potholes with the board. When I got past Bailey on the board I slowed down a bit around the cans to get my breath back and then just went for it again and managed to get the winning wave.

“It’s good training with the boys and we just love Newport.”

Clues kept pushing hard to the beach and managed to finish with the silver. Blake got a strong wave on the way home and was fourth off the board before managing to sprint past Jake Morris on the beach to claim the bronze and stop another Newport trifecta.

The Australian Youth Surf Life Saving Championships got off to an eventful start at North Burleigh beach on Saturday, with 1000 competitors from across the country in action on the Gold Coast.

The under 14 and under 15 individual champions were added to the history books in the Surf Race, Board and Beach Sprint. The choppy and blustery conditions provided exciting competition. But the rainy conditions couldn’t dampen the enthusiasm of the competitors and spectators.

There was plenty to cheer about for the New South Wales clubs, winning 11 of the 15 finals, including four gold to Newport SLSC.

Newport had a clean sweep in the u14 Board Race. Twins Jake and Mitchell Morris went 1-2, and Bailey Clues claimed bronze.

Mitchell also won the Surf Race earlier in the day. His clubmate Joel Piper took out the u15 Board.

“It was great in that swim I went hard, I was out in front and then that wave comes and they (rest of the field) were right there as well but that’s surf,” Mitchell said.

“You’ve got to move on to the next race with your head screwed on and just go hard… I was lucky to get that runner all the way in.”

Nathan Robinson from Warilla Barrack Point, south of Wollongong, was too good in the male u15 surf race.

Kimberly Doyle, twin of Katelynn, from Newport won the u14 Surf Race, while Lily O’Sullivan was led from the start and showed her great skills in the u15 Surf Race for Cudgen Headland.

“I saw Bailey (Day) on the wave and I just told myself to keep swimming, swimming,” O’Sullivan said.

“I knew to go hard off the start and not get hit by the waves and get into the lead. I’m really happy with that and I hope the rest of the finals go as well.”

Maroochydore’s Jamie Perkins got the first win for the Sunshine Coast region in the u15 Board Race, while Lily Fanati got a win for North Bondi in the u14 Board.

The Ironman and Ironwoman finals were postponed until 830am on Sunday (local time), as there was a sighting of a marine creature near North Burleigh before the Board finals.

Competition was immediately suspended while a search was conducted, in which no further sightings were made.

In accordance with event procedures, competition was suspended for 60 minutes. When action resumed the Board finals were completed but there was not time to complete the coveted Iron finals.

On the Beach Track, there were no delays and plenty of speed. Grace Hewitt got a great start and hung on in the u15 Sprint. She will be the talk of Fingal Bay, in NSW, after winning the title but she was humble in victory.

“It was an honour to represent my club and I want to thank my coach,” Hewitt said. She also thanked her only sponsors, her parents.

Zara Lammers from Wanda SLSC won a close finish in the u14.

Peter Thoroughgood from Eloura SLSC won comfortably in the u15’s. There were plenty of cheering from the Currumbin Vikings for Vincent Whatmough. It was enough to get him home in the u14 Sprint.

“Thank you very much it means a lot. To be the national champion feels amazing and sounds amazing. I can’t wait to tell everyone at school.”

The last final for the day was the u15 male Beach Relay. Cronulla SLSC took the honours from shire neighbours Eloura SLSC, with Alexandra Headlands from the Sunshine Coast the bronze.

The first event of the day was the under 15 Mixed 2 Person R&R, with Townsville Picnic Bay SLSC taking the gold and bronze. With North Cronulla in silver.

The second and final day of the youth events at #Aussies2019 will continue at North Burleigh with the Ironman finals before the Board and Surf team events.  The 2km beach runs will commence from 7am (local time) and the action in the surf starts from 830.

At the southern end of Burleigh there will be 300 competitors, of all ages, contest the ocean swim from 745am.

On Monday the 2019 Australian Surf Life Saving Championships will move to Broadbeach for the start of the Masters events, with the Open events from Wednesday to Sunday.